Wyoming and the Equal Rights Amendment

Wyoming and the Equal Rights Amendment

First introduced to Congress in 1923, the Equal Rights Amendment (ERA) to the United States Constitution was proposed to ensure that the rights of women were equal to those of men across the nation. The amendment reads as follows:

Section 1. Equality of rights under the law shall not be denied or abridged by the United States or by any State on account of sex.

Section 2. The Congress shall have the power to enforce, by appropriate legislation, the provisions of this article.

Section 3. This amendment shall take effect two years after the date of ratification.

The amendment was controversial from the start. Working class women and organized labor opposed it because it they feared it would strip them of protective legislation at work, like shorter work days and prohibiting night work and heavy lifting. Middle-class and white collar workers supported the amendment as it would put them on equal footing with their male counterparts. 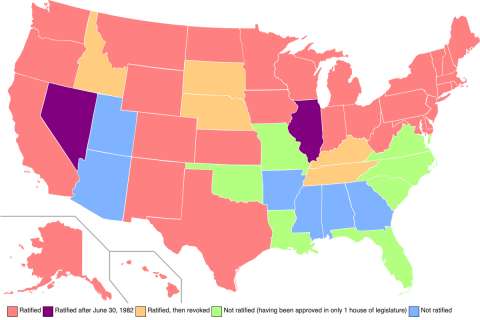 In 1972, following Women's Strike for Equality in Washington, D.C., and other vocal demonstrations from the National Organization for Women (NOW) and other organizations supporting the women's liberation movement, Representative Martha Griffiths of Michigan successfully introduced House Joint Resolution No. 208.

In short order, it was adopted by both the U.S. House of Representatives and the U.S. Senate and endorsed by President Nixon. Next step would be submission to the states. Once three-fourths of the states ratified it—38 states—the amendment would become part of the Constitution. Congress set a deadline of March 22, 1979 for ratification.

After much debate in the Senate and in the state, Wyoming became the 23rd state to ratify on January 24, 1973. Supporters celebrated by decorating the Esther Morris Statue outside the Capitol Building in Cheyenne with flowers.

By the end of 1977, 35 states had ratified. At that point, conservative opposition, led by activist Phyllis Schlafly and others, intensified.

Despite ratification by an initial surge of 30 states, including Wyoming, only 35 of the necessary 38 states had ratified by the March 1979 deadline. In 1978, meanwhile, Congress had extended the deadline to 1982, but this turned out not to make a difference, as no more states voted to ratify by the 1982 deadline.

Further complicating the question, five states—Idaho, Kentucky, Nebraska, Tennessee and South Dakota—rescinded their ratifications. The Constitution is silent on whether states can do that, however, and the question has not been tested in the courts.

In 2017 and 2018, respectively, the Nevada and Illinois legislatures made the so-far symbolic gesture of ratifying the amendment three and a half decades past the deadline. The ratification by Wyoming, the Equality State, remains intact.