Percy Metz was born under a lucky star. He may not have believed that during the morning of April 3, 1909, when, as the young and inexperienced Big Horn County Attorney, he was suddenly confronted with a political triple murder in his county. But the killings, soon to be forever known under the rubric of the “Spring Creek Raid,” proved not to be the professional disaster he must have feared, but the catalyst for a remarkably successful life. 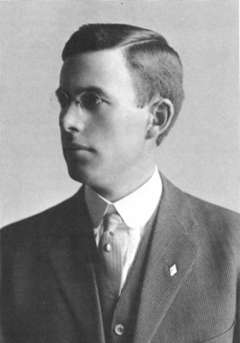 Percy Wendell Metz was born in Odell, Illinois, on October 12, 1883 to William S. Metz, a lawyer, and Jennie Gammon Metz, the daughter of a distinguished Chicago family. Only six months later, the Metz family moved to Sundance, Wyo., where William practiced law and Percy enjoyed an idyllic childhood in and around the frontier town of Sundance. In 1892, the family moved again, this time to Sheridan, Wyo., where Percy continued his enthusiastic pursuit of all things outdoors.

He was bright and ambitious, graduating from Sheridan High School in 1899 before his 16th birthday. For four years he worked various jobs, then entered the University of Nebraska at Lincoln. Metz graduated from law school in 1906, at 22 the youngest man in his class. Also in 1906, apparently before he left Lincoln, he married Mamie Miller; his brother, Charles, was his best man.

An immediate job opening was available at his father’s Sheridan law firm of Metz and Sackett. Percy accepted, but did not go to Sheridan, instead going to a new branch office of the firm (to be known as Metz, Sackett, and Metz) in Basin City, Wyo., the county seat of Big Horn County.

Soon to be referred to as just “Basin,” the town had been founded only 10 years earlier. It was growing fast as the county seat of a county that encompassed almost the entire Big Horn Basin, a valley in north central Wyoming, surrounded by mountains, of some 10,000 square miles. Agriculture was the engine of growth for the area, as large irrigation canals –the Cody Irrigation Canal, the Sidon Canal, the Big Horn Canal, the Lower Hanover Canal, and the Upper Hanover—were dug between 1900 and 1905.

And in 1906, the Burlington Railroad drove from Montana deep into the Basin, constructing its line to a point south of Worland, Wyo. People flooded into the Big Horn Basin to start farms or to live in adjacent towns that serviced the needs of farmers.

Little is known about Percy’s law practice in Basin other that he did some domestic relations work. But if his experience was like that of other young lawyers in the small towns of the Big Horn Basin, he no doubt touched nearly every corner of the law, including wills, deeds, simple contracts, defending people charged with crimes in the justice and district courts, boundary disputes, and suits for failure to pay debts. This practice would not have been fast paced, but a slow enterprise compared to those of larger towns and cities.

In 1908, however, Metz decided to run for the office of Big Horn County attorney, a position that would increase his workload, and, probably, his paycheck. The weakness of his candidacy was his lack of experience. His father, William, a very experienced attorney, proclaimed that if Percy was elected and he got in over his head, he (William) would help his son and assist in the case without charge.

Percy Metz campaigned vigorously all over the sprawling county, presented himself as a likeable and earnest young man, and was elected, despite his opponent’s sneering reference to him as a “high school kid.” Perhaps the electorate felt that it was unlikely Percy would be faced with a big, challenging case in sleepy Big Horn County. But only three months after assuming office, County Attorney Percy Metz was confronted with what remains the most important case in the county’s history.

About 9:50 a. m., April 3, 1909, Walter Fiscus, the proprietor of the hardware store in Ten Sleep, Wyo., placed an urgent call to Felix Alston, the Big Horn County sheriff. Fiscus told Alston about a sheep raid that had occurred the night before on Spring Creek, seven miles south of Ten Sleep, wherein three men were killed, dogs and sheep shot down, wagons burned, and two men kidnapped. Sheriff Alston immediately contacted the county attorney, Percy Metz, and the two of them set out for the all-day buckboard trip south to Ten Sleep.

A plague of sheep raids

In the two decades before 1909, cattlemen’s raids against sheepmen had plagued Wyoming: at least six men had been shot and killed, tens of thousands of sheep killed, and a great amount of property destroyed. These were brazen, political crimes intended to send a message, and not a single one had ended in conviction. Many cattlemen strongly supported those charged with crimes and prevented any convictions. Metz and Alston were aware of these facts and while determined to vigorously pursue criminal charges, must surely have feared for the outcome.

But things had changed by 1909. There now was some hope of successful prosecution of sheep-raid crimes. Communication was more efficient, with telephone lines available throughout the Big Horn Basin. B. B. Brooks, governor of Wyoming, a sheepman from Casper, was determined to put an end to the raids. The Wyoming Wool Growers Association, organized to protect sheep interests, had been founded in 1903.

The help of Gov. Brooks and the Wool Growers proved crucial: The governor assisted in part by authorizing the use of Wyoming militiamen at the time of trial, preventing cattlemen from flooding Basin with menacing thugs, as they had during a Sundance, Wyo., trial in 1908.

The Wool Growers loaned their crack detective, Joe LeFors, to Big Horn County and forwarded money—necessary for many things, but especially useful to hire experienced attorneys necessary to try the cases of the men arrested for the raid. Perhaps most significantly, demographic changes in the Big Horn Basin meant that a trial jury of farmers—neutrals neither sheepmen nor cattlemen—could be seated. 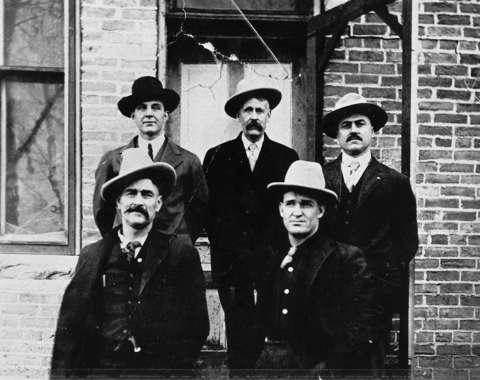 The first man tried was Herbert Brink. Three outside attorneys presented the case on behalf of the state: E. E. Enterline and William Metz—Percy’s father—from Sheridan, and Billy Simpson from Cody. The prosecution presented a strong case, and on Nov. 11, 1909, to the surprise of people all over the state of Wyoming, the jury convicted Brink of first-degree murder. This conviction was followed by four more, as the remaining charged defendants pleaded guilty. Two of the raiders had turned state’s evidence, testifying on behalf of the prosecution at the trial. They were not charged with crimes. These convictions stopped forever the killing in sheep raids in Wyoming; thereafter there were only two minor raids in the state.

Percy Metz’s participation at the trial was minimal, although he was extensively involved in the background work of the case. But because Metz was the prosecuting attorney under whom the convictions were obtained, he gained a major reputation. The reputation lasted the rest of his life, surviving such adversities as his failure to gain re-election in 1910, apparently because he too vigorously enforced state laws against gambling.

When, in 1913, the Big Horn Basin was split into four counties and the new Fifth Judicial District was created, requiring a district judge, Metz was selected by Wyoming Governor Joseph Carey as the first judge of this new district. He was twenty-nine years old, said to be the youngest district judge in the country.

Metz served as the district judge of the Big Horn Basin for the next 38 years, re-elected nine times. It seemed back then that “district judge” meant Percy Metz, and “Percy Metz” meant district judge. As a judge in the beginning years of his service, Metz had the advantages and disadvantages of his youth and short experience. A vigorous man who spent as much time hunting and fishing as he could, he was a vigorous district judge, too.

He had a special touch with the voters of the Fifth Judicial District, and he skillfully maintained that good relationship until his retirement. But his relationship with the attorneys practicing before him was not always as good. Attorneys sometimes found him to be overbearing. One lawyer said he was “cocky.” Attorneys had to admit, though, that Metz was not afraid to make a decision, meaning that he was decisive, an important trait in a district judge. He also had a good sense of humor, very welcome in the tense atmosphere of a trial.

Metz’s private life, however, was sometimes not as happy as his career. His wife, Mamie, died about 1930. The couple had one child, Louise, born in 1916. Louise married Ken Hunton. They had no children. In 1932, Percy married Cornelia Britton, and she survived him upon his death.

Percy had received $35,000 in 1916 from the sale of his interest in the Good Drilling Company, a small company that drilled oil wells in Wyoming. That money, the equivalent of more than $800,000 now, enabled him to travel and to undertake ambitious hunting and fishing expeditions both before and after his retirement as district judge. After Metz retired in 1950, he toured a number of Wyoming county historical societies, telling their members about the Spring Creek Raid, still a major topic of interest in Wyoming.

Tapes were made of some of his talks, and they are fascinating. Metz briskly and authoritatively takes his listeners through the inside story of the prosecution following the raid. His voice has the cadence of a New Englander, though not the same accent. In the talks, however, he seemed to rely solely on his memory, which was sometimes inaccurate.

Late in his life Metz also entertained thoughts of writing a book about the Spring Creek Raid. In addition to his insider knowledge of the case, he possessed highly important written materials, including, for example, notes setting out the entire strategy of the prosecution and a transcript of the grand jury testimony.

But he apparently sickened before he was able to write his book, and he turned over all his materials to his niece, Lola Homsher, longtime director of the Wyoming State Archives and Historical Department. Eventually, Metz’s items were housed at the University of Wyoming records, and have provided rich source materials for researchers—this writer among them—focusing on the Spring Creek Raid and other topics.

His last illness was prostate cancer, and though he fought it for years, he succumbed in Basin in 1964 at the age of 80. 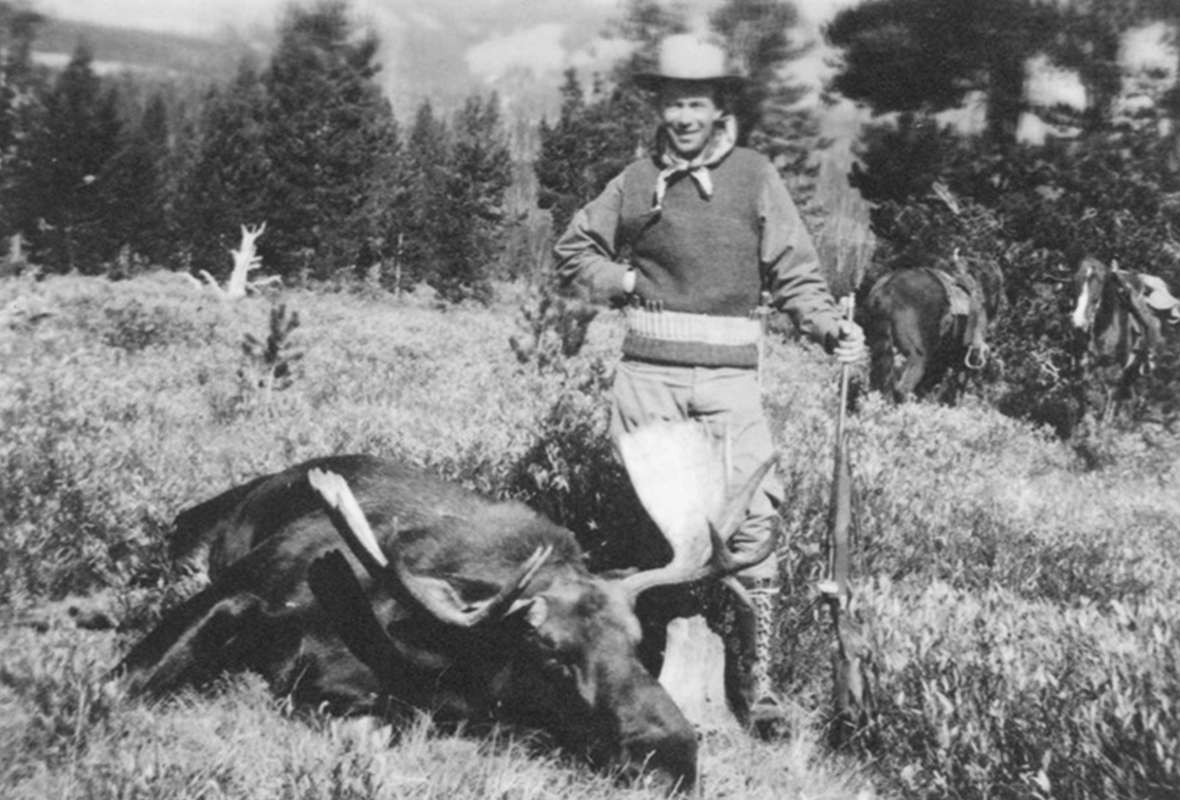 Herbert Brink convicted of first-degree murder for his role in the Spring Creek Raid.

John Davis practiced law in Worland Wyoming from 1973 until 2016, when he retired. He has written A Vast Amount of Trouble, which chronicles the 1909 Spring Creek Raid; Goodbye, Judge Lynch, which looks at the vexing troubles with vigilantism in the late nineteenth and early twentieth centuries; Wyoming Range War: The Infamous Invasion of Johnson County (2010); and The Trial of Tom Horn (2016). The last two books were each given the Wyoming State Historical Society Award for historical writing for their respective years of publication.

The Big Horn County Courthouse, where Percy Metz heard numerous cases as a district judge during his 33-year career, is located at 420 West C Street in Basin, Wyo.

Site of the Spring Creek Raid

The site of the Spring Creek Raid lies about seven miles south of Ten Sleep, immediately east of State Highway 434, the Upper Nowood Road. A state historical marker has been placed next to the site. Travel on U.S. 16, 65 miles west of Buffalo, Wyo. or 26 miles east of Worland to Tensleep, and then proceed south seven miles on State Highway 434 to Spring Creek. Monuments have been placed where wagons sat north and south of Spring Creek on April 2, 1909.

To read the text of the state historical marker at the site, search for “Spring Creek Raid” here.

The Washakie Museum and Cultural Center, on the west end of Big Horn Avenue in Worland, offers exhibits on the prehistory, cultural history and European settlement of the area, and serves as well as a hub of local cultural activities. Visit the website for more information on visitor hours and upcoming exhibits and events.