Beginning in June 1923, University of Wyoming Professor Grace Raymond Hebard and Laramie banker Edward Ivinson began corresponding about building a memorial for local veterans of World War I—the Great War, as it was called at the time.

They discussed placing a plaque on the university campus commemorating the 11 UW students who lost their lives in the war, which ended Nov. 11, 1918. As they conferred, however, the project grew to include all UW and Albany County veterans of that war.

Ivinson agreed to pay for a much larger memorial; the Laramie City Council accepted the offer. A contract was signed in February 1924 for the large eagle atop the memorial and the bronze plaques that would bear the names of those who served. Experienced Italian-born war-memorial sculptor Giuseppe Moretti of Pittsburgh, Pa., was selected for the design. 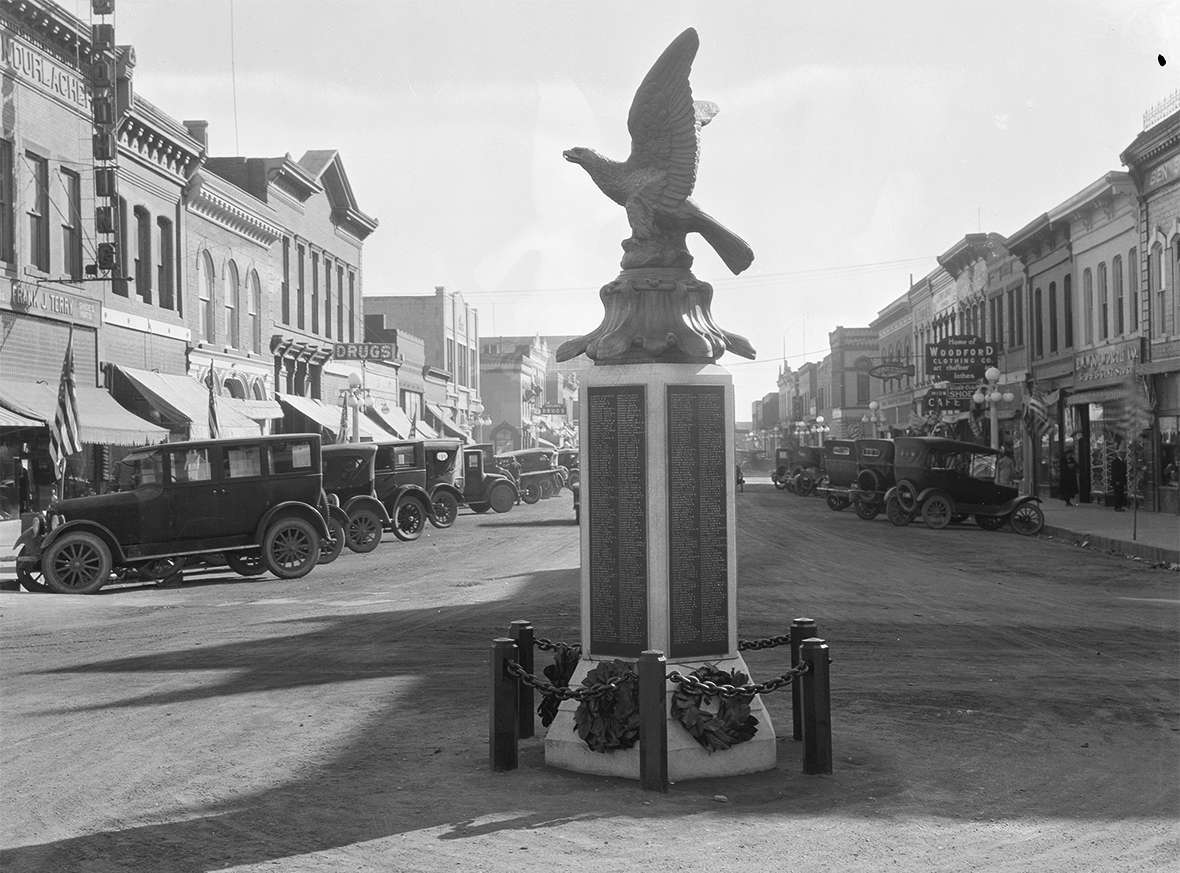 Hebard suggested the memorial be placed at the university; she felt it would be likely to get damaged downtown. Ex-mayor Ivinson rejected that suggestion and insisted the monument be placed in the center of the intersection of Second and Thornburgh streets; Thornburgh was later renamed Ivinson Avenue. Ivinson had built brick buildings on three corners there, and for years was the president of the First National Bank, on the fourth corner.

Hebard communicated with military officials to initiate a list of those who served and died. She wrote hundreds of letters to individuals seeking information about all who had served. In February 1924 a list of UW students and graduates who had served in the war, together with all other Albany County residents who had served in the war, 1006 names altogether, was published in the Laramie Republican-Boomerang. After the publication, Hebard asked all citizens to help her complete the list and she was able to add 50 more names; the number of soldiers who had been killed grew to 32. 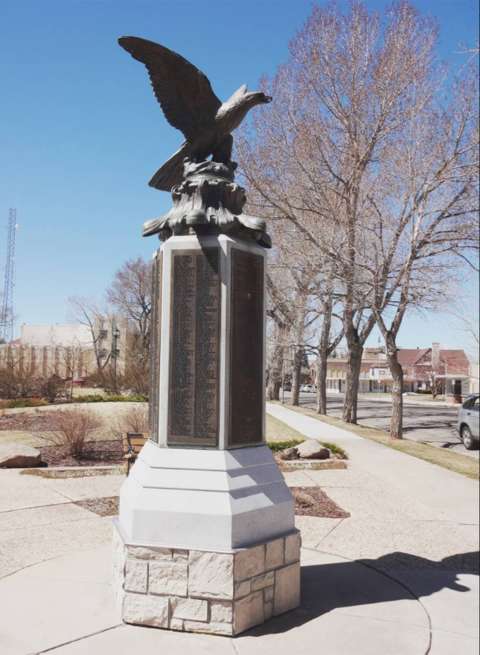 Despite her best efforts, not all names of those who served are listed. Hebard received letters after the panels were cast from families who belatedly found out about the project. Hebard wrote the families letters of apology.

The dedication was held Oct. 7, 1924. The Republican-Boomerang placed the story at the top of Page 1. Hundreds were in attendance. Laramie Mayor Thurman Arnold and past UW President Aven Nelson spoke at the event.

Representatives of the Daughters of the American Revolution, the Grand Army of the Republic (Union veterans of the Civil War), Veterans of the Spanish American War and the American Legion were given honored places. The ceremony closed with the reading of the names of those who died, followed by a volley fired by the ROTC rifle squad, taps and the national anthem.

Ivinson was ill and unable to attend the dedication so his friend, A.C. Jones, read Ivinson’s speech, which recognized the sacrifices of the men and women who went off to the “War to End All Wars.” It read in part:

“I am here today for the purpose of presenting to the City of Laramie and through it the citizens of Albany County, the Memorial Monument on which is inscribed the names of those who made the great sacrifice—the Gold Star men whose memory we honor—let us pause and reverently bow our heads when their names are called, … the courageous young men who enlisted under the flag of our country and were willing to surrender their lives if need be, in her behalf. … May we see in the Eagle whose gaze is directed towards the rising sun, which gives light and life, a symbol of that for which our Country stands and may its outstretched wings symbolize and remind us of the blessings we enjoy under the protecting care of our beloved United States—a land that is dear to the hearts of all true, Americans.”

Ivinson died in 1928. Within a few years city officials, fearing an automobile would one day crash into the monument at its downtown intersection, moved the memorial to the corner of Sixth Street and Ivinson Avenue near the Albany County Courthouse, where it remains today. The monument was rededicated Sept. 20, 2013.

Editor’s note: This article was one in a series prepared for the Albany County Museum Coalition, an alliance of institutions that promote Laramie’s historic and cultural resources.

Life on the Home Front: Wyoming During World War I
Grace Raymond Hebard: Shaping Wyoming's Past
Edward Ivinson, Laramie Banker and Philanthropist
Bob David's War: A Wyoming Soldier Serves in France
Paul Kendall's War: A Wyoming Soldier Serves in Siberia
Albany County, Wyoming
A Brief History of Laramie, Wyoming
Aven Nelson, Botanist and President of the University of Wyoming
The Wyoming State Flag and the Women Who Made It Fly
Marking the Past: A History of Wyoming’s Historical Markers

An eagle-topped monument commemorating those from Albany County and the University of Wyoming who served in World War I, with a separate panel listing 32 men who gave their lives, stands on the corner of Ivinson Avenue and Sixth Street in Laramie, Wyo., near the Albany County Courthouse.