June Etta Downey, longtime professor of psychology at the University of Wyoming in the early 20th century, loved science, scholarship and creative pursuits with equal fervor. She was the first woman ever to head a psychology department at a state university, and her work won acclaim both nationally and internationally. 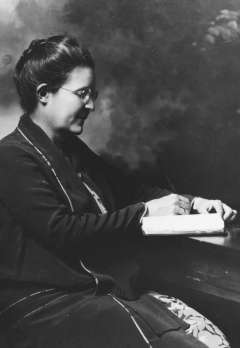 Near the end of her life, poking gentle fun at her own profession, she wrote, ″Those who read extensively in the literature of mental hygiene [psychology] often sigh because they suspect that much of the charm of life comes from the irrelevant, the irresponsible, the not wholly sane. … They are glad that the mental hygienist never got his fingers on [the poets] Shelley, nor Byron.″

Downey’s father, Stephen W. Downey, fought in the Civil War in the Union Army and moved to Laramie, Wyo., in 1869 where he practiced law. In 1871, he served his first of seven terms in the Wyoming Legislature. The following year, he married Eva Owen, sister of Wyoming surveyor William O. Owen.

June Downey, the second of their 10 children, was born July 13, 1875, in Laramie. After attending public school and the University of Wyoming Preparatory School in Laramie, she went on to the University of Wyoming, graduating in 1895 with degrees in Greek and Latin. During the following school year, 1895-1896, Downey taught in the Laramie public schools.

She studied psychology at the University of Chicago from 1896-1898, earning her Master of Arts degree.  During this time, her first professional article, ″A Musical Experiment,″ was published in The American Journal of Psychology.

When she returned to Laramie, she taught English and philosophy at the University of Wyoming. At that time, science was considered a branch of philosophy. In 1905, Downey was promoted to professor of philosophy. Between 1898 and 1906, she published two more professional articles—in The Psychological Review and The Psychological Bulletin, plus seven essays, poems and stories in popular journals and a book of poetry, The Heavenly Dykes. Dedicated to her late father, the book was titled for its first poem, a rhapsody to the springtime sky that compares trees to dikes holding back the “azure floods of the air.” 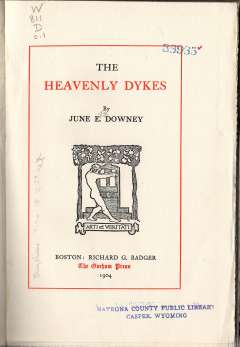 Colleagues and former students unanimously described her as modest, hardworking and almost painfully shy except in front of a class when she inspired her students with her curiosity and drive to explore. Reportedly she allowed students great latitude in their own research.

Downey’s doctoral dissertation, ″Control Processes in Modified Handwriting,″ centered on handwriting and what the study of someone’s handwriting could reveal about personality. Graphology, in 1906, meant two different things: a branch of psychology, and also what Downey and her colleagues termed a pseudoscience, ″on a level with other pseudo-sciences which look for a facile interpretation of one’s mental make-up from a reading of the lines in the palm of the hand or the bumps on the head,″ Downey wrote in a subsequent book on her handwriting studies.

Downey and other psychologists were interested in handwriting as an automatic motor activity that could be impaired or disturbed in various ways with its results quantified. Impairments included writing blindfolded, in mirror image, with the non-dominant hand and with the dominant hand ″in a strained position.″ Distractions included counting aloud, reading silently or aloud and counting the recurrences of a given word in a passage the experimenters read aloud. The subjects’ handwriting changed in size, slant and legibility, as well as rate of execution.

For the next 12 years, Downey continued her handwriting studies, publishing the results in her book, Graphology and the Psychology of Handwriting. She dedicated the book to her uncle, ″William O. Owen, in recognition of his devotion to Truth as an Ideal.″ Cautious in her conclusions, Downey wrote, ″[T]here is reason to believe that … extreme variability [in size, slant, alignment and other graphic elements] is evidence of the possession of specific mental traits.″ 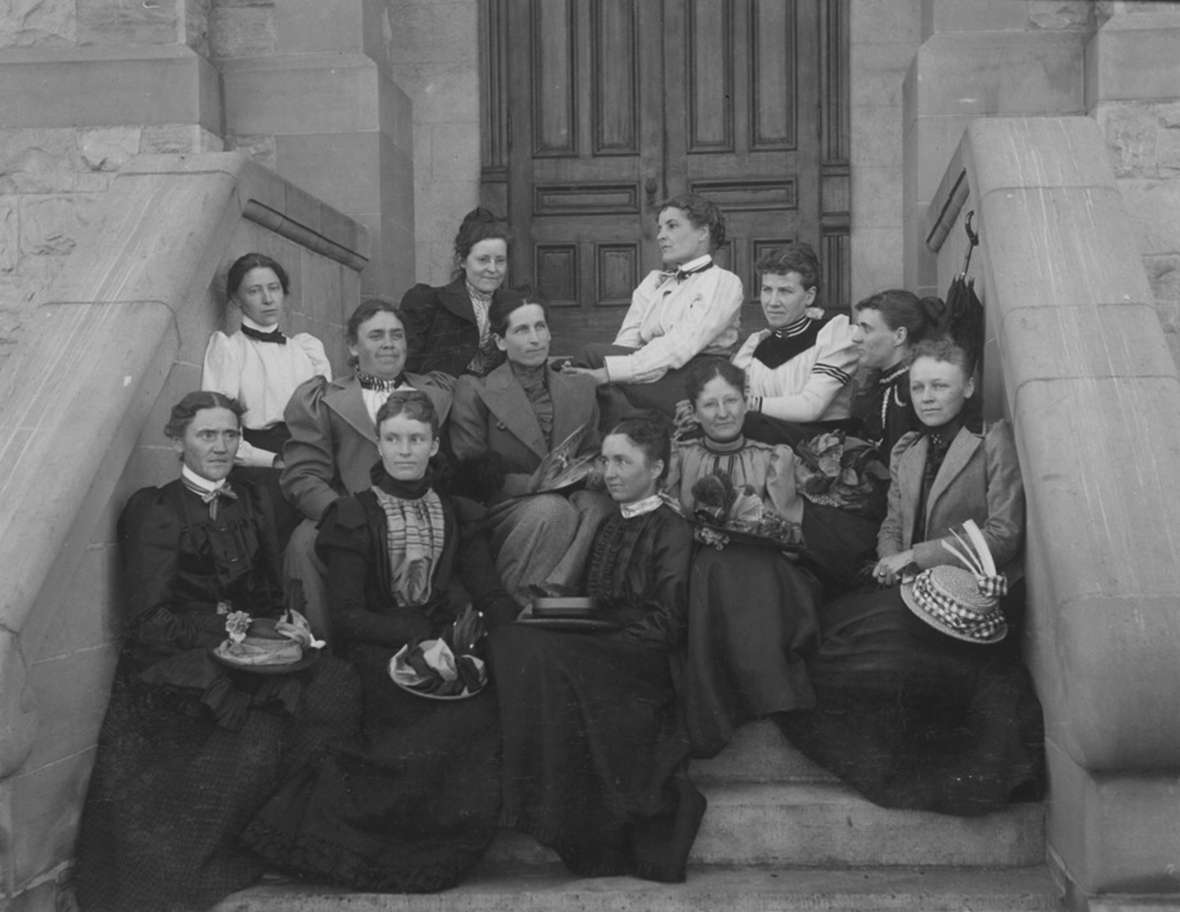 By 1916, Downey was already a nationally recognized expert in personality testing. In April of that year, James Howell, a prisoner in the Carbon County jail in Rawlins, Wyo., assaulted the jailer and tried to escape. When the jailer subsequently died of his injuries, Howell was tried for murder. His attorney entered a plea of insanity because Howell appeared unable to answer even simple questions. Many believed he was faking. 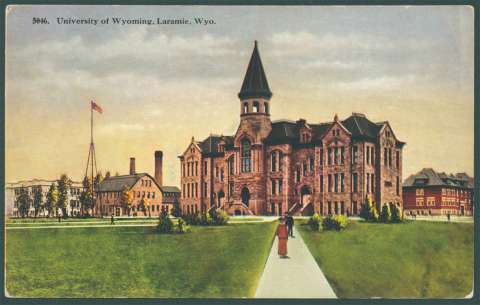 In the Jan. 13, 1917, Survey, a national journal on social problems and charities, Downey reported on her role in this case. In the presence of the judge and jury, she administered to Howell the new Binet Intelligence Test, developed in 1906 by French psychologist Alfred Binet and later adapted by Stanford University. At the suggestion of Howell’s attorney, Downey provided the judge and all members of the jury with blank score sheets so they could follow the progress of the test and do their own scoring. By this means, she convinced the jury that Howell, about 25, had a mental age of between 6 and 7 years. Howell was subsequently sent to the Wyoming State Hospital.

″Apart from the intrinsic interest in the case itself, and one’s sense of justice that revolts at any brutality of method that might lead to hanging a brain-sick man,” Downey wrote, “the case is worthy of remark for two other reasons. In the first place, we must welcome every innovation in the direction of bringing into court not only the expert witness only, but the scientific evidence upon which he bases a positive opinion. Secondly, any enlightenment of the public as to the need of intimate investigation of the life and mind of the so-called criminal should be welcomed. More and more we realize that there are criminal acts but no criminals, and that society, if properly alive to the problem, could protect itself and the unfortunate man who may become a so-called criminal, by discovering him before he commits a crime.″

Eventually Downey became internationally known for her work in personality testing. Believing that the new field of intelligence testing should not be limited to measuring the intelligence quotient (IQ), Downey was among the first to develop a test for non-intellectual traits and believed that personality should be studied as an integrated whole.

Her book, The Will-Temperament and its Testing, published in 1923, reviewed the current research and thinking on personality testing and included a description of her own methods plus the results of others’ use of her tests. Downey tested for traits such as speed and fluidity of reaction, aggressive or inhibited tendencies, gender factors, resistance to opposition, finality of judgment and carefulness and persistence of reaction.

In Chapter 11, “Testing the Will-Temperament Test,” Downey cited several criticisms of her test, among them that “it is a mistake to label the … [12 subtests] with the name of specific personality traits.” For example, a test of an individual’s ability to disguise his or her handwriting should be labeled as such rather than as a test of flexibility, as Downey had it labeled.

With a remarkable absence of defensiveness, Downey wrote, ″A new departure such as that of temperamental testing rightfully calls down a fire of criticism directed both at the general project and at the way in which the project has been carried out. Specific criticisms, especially those based upon experimental work, are bound to be of the greatest value.″

Downey’s study, ″The Imaginal Reaction to Poetry,″ was published in 1911. She presented 12 subjects with about 100 fragments of different styles of poetry and cataloged their responses, including visual imagery, emotional stimulation and sensory images. 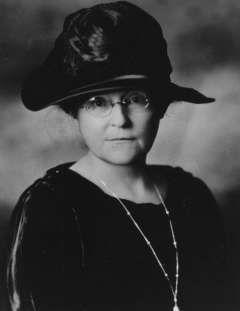 Downey herself wrote poetry, plays, essays and short stories, some of which were published in popular journals. She also composed both the words and music for ″Alma Mater,″ still the University of Wyoming college song.

She published many other articles on creativity as well as two books on the subject: Plots and Personalities in 1922, co-authored with Edwin E. Slosson, former professor of chemistry at the University of Wyoming; and in 1929, Creative Imagination.

During her long-lived career, Downey published seven books, including The Kingdom of the Mind, an informal book to educate children about psychology. She also published 74 professional articles and 23 reviews. Two of her articles were published in the Encyclopedia Britannica. She was also editor or contributing editor for three professional journals, and a member of many professional organizations. She served on the council of the American Psychological Association, a distinctive position for a woman in that era.

She was listed in prominent notable achiever lists, such as The Psychological Register, Leaders in Education, Who’s Who in America, Who’s Who in American Education and American Men of Science. In the 1927 edition of the latter, Downey’s name was starred as an exceptional scientist, one of only 100 starred names out of the 13,500 listed. (In a 1941 edition of Men of Science, fewer than 3 percent of the scientists listed were women; it seems likely that in 1927 the percentage was considerably smaller than that.)

For much of her adult life, Downey suffered from a ″nearly debilitating″ illness, which sources do not identify. However, all sources contain remarks about her outstanding dedication to teaching and research in the face of this problem.

In August 1932, while Downey was in New York to address the American Psychological Association and to attend the Third International Congress of Eugenics, she became ill and was diagnosed with stomach cancer. She died at her sister’s home in Trenton, N.J., on Oct. 11, 1932. She was buried in Laramie’s Green Hill Cemetery. On Sept. 28, 1933, university officials dedicated a bronze plaque in memory of her life and services to the university and installed it in Old Main, a building on the university campus.