Stephen Wheeler Downey, a prominent Laramie lawyer and legislator, was born on July 25, 1839, in Westernport, Allegany County, Maryland. As a young man, he passed the bar and worked in a law firm until the start of the Civil War. 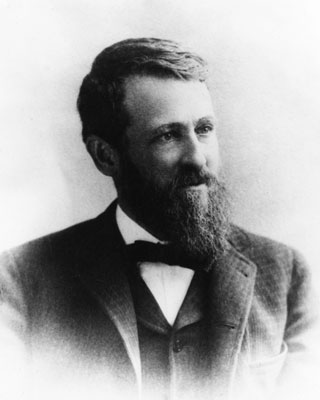 In October 1861, he joined the 3rd Maryland Infantry, Potomac Home Brigade as a private. In January 1862, he was promoted to lieutenant and in March to lieutenant colonel. On Sept. 10, 1862, he was wounded in fighting associated with the Antietam campaign near Harper’s Ferry, Va.

Downey was discharged shortly afterward because of his injuries; by the time of his discharge he had attained the rank of colonel. If quick rise in the ranks is any indication, his daughter Alice Downey Nelson believed many years later, it is likely he eventually would have become a general in the army.

During the 1860s, Stephen Downey married, and he and his wife had two children. In 1869, he followed his brother, William O. Downey, a surveyor, to Laramie, Wyo. The move came at a steep price, however, because Stephen’s wife died shortly after they arrived.

In Laramie, Stephen Downey began practicing law and in 1869 and 1870 served as Albany County’s first prosecuting attorney. That means he was working as a prosecutor in Laramie at the time when women began serving on both grand juries and petit juries there.

In the fall of 1871, Downey entered politics when he was elected to the Council, the upper house of Wyoming’s Territorial Legislature. That same year, he played a crucial role upholding votes for women in Wyoming. The legislature had made Wyoming the first government in the world to grant women the right to vote two years earlier, but in 1871, there was a move for repeal.

The House passed a repeal bill by a strong margin and the Council, where Downey was serving, unanimously passed the legislation. Gov. John Campbell vetoed it, however. The House voted to override the veto, again with a strong majority. In the Council, the 5-4 vote to uphold the veto was just one vote short of the two-thirds majority needed for successful override and passage of the bill. Downey was one of the four; he had changed his mind since the earlier Council vote, and by doing so helped save the opportunity for women to vote in Wyoming.

In 1872, Downey married Evangeline Victoria Owen. They had ten children together, including Stephen Corlett Downey (1873-1961), a lawyer who partnered with his father; June Etta Downey (1875-1932), a psychology professor at the University of Wyoming who was the first woman to head a university psychology department in the United States and whose research won national renown; Sheridan Downey, (1884-1961), who became a U.S. senator from California; and Alice Downey Nelson (1882-1969), who became the family historian.

After marrying Evangeline, Stephen Downey was elected twice more to the Council, in 1873 and 1877, and also in the 1870s served separate stints as territorial treasurer and auditor.

In the fall of 1878, Downey was elected to serve as Wyoming Territory’s delegate in the U.S. Congress. Territorial representatives, then as now, were allowed to introduce bills but not to vote—that was a privilege that came only with statehood. Downey made national news in 1880 when he introduced a bill to spend $500,000 in federal funds on murals in the national Capitol showing “the life, death and resurrection of Jesus Christ.” During debate, he asked for and received permission to enter added remarks on the subject into the Congressional Record. Taking advantage of this privilege, he had the Record publish a 2,500 line poem, “The Immortals,” which historian T.A. Larson characterizes as allegorical, mythological and morally instructive.

Downey’s bill failed. The New York Times pointed out, after the fact, the unnecessary excesses of the poetry publication. Laramie newspaperman Bill Nye couldn’t resist poking fun, concluding in a mock-biblical voice, “The wise men arise and say, after it is too late, ‘This is indeed the work of one who laugheth at us and putteth up a job on us of the size of a Presbyterian church.’ And no man wotteth why it is so.”

Perhaps that was enough of national politics for Downey; in any case, he did not run again for the job, but he remained active at the territorial level. He was elected to the Territorial House of Representatives in 1886 and again in 1890, the last session before statehood, when his fellow representatives elected him speaker of the House. In the 1886 session, he introduced a successful bill for funding a university, and is thus considered a founder—even father—of the University of Wyoming. In 1889, he was a delegate to the state constitutional convention.

After statehood, Downey served as president of the University of Wyoming’s board of trustees from 1891 to 1897. Downey was also instrumental in persuading Bishop Ethelbert Talbot to have what is now known as St. Matthew’s Episcopal Cathedral built in Laramie during the years 1892 through 1896.

Downey also served two more terms in the Wyoming House, in 1893 and 1895, when he was again elected speaker. A hint of the esteem in which his colleagues held him came during the 1893 session of the Wyoming Legislature, perhaps the most contentious session the state has ever seen. It was the winter after the notorious (HYPERLINK: http://www.wyohistory.org/essays/johnson-county-war) Johnson County War, which split Wyoming politics right down the middle.

The Legislature was divided among 22 Republicans, 21 Democrats and five Populists, who held the swing votes. At that time, U.S. senators were still elected by state legislatures, not by a vote of the people. U.S. Senator Francis E. Warren was up for re-election, but his sympathies were so closely identified with the invaders of Johnson County in the conflicts of the previous year that he could not win enough votes. In the end, no senator was elected, and Wyoming had to get by with just one U.S. senator for the next two years. But of the many candidates for the many ballots taken during that long fight, one of the highest vote getters was Stephen Downey, with 21 votes.

Through all these years, Downey was one of the best-known lawyers in Wyoming. One of his many clients was the Carnegie Museum of Pittsburgh in its 1899 negotiations to get possession of an enormous dinosaur to which the University of Wyoming felt it had a prior claim—and the museum was eventually successful.

Also in 1899, Downey again became the Albany County attorney, a position he held until his death in Denver August 14, 1902. He is buried in the Greenhill Cemetery in Laramie.

Tyler Eastman was a student in University of Wyoming Professor Phil Roberts’s history-writing class when he drafted this article in the spring of 2011.