Newcastle, Wyo. began as a product of the Chicago, Burlington and Quincy Railroad. In the 1880s when railroad officials planned to expand from the Midwest toward the Northwest, they owners looked for routes with a ready coal supply to fuel their locomotives.

Coal had recently been discovered in northeastern Wyoming on the southern edge of the Back Hills, just a few miles west of the Dakota Territory line. The settlement of Cambria was established there in 1887, and the Burlington started building northwest from Alliance, Neb in 1888.

Plans were already underway to create a city where a spur left the main Burlington line to head north a few miles to the coal mines at the new town of Cambria. A railroad subsidiary, The Lincoln Land Company, bought a plot of land with that in mind. The name of Newcastle, Wyo., came from, the Cambria Coal Company’s Superintendent J. H. Hemingway, recalling his own coal-shipping hometown of Newcastle-upon-Tyne, in England.

The site was rough. Dense patches of trees surrounded deep gullies, and rocks and shale banks had to be graded before any construction could begin. In July 1889, the Kilpatrick Brothers & Collins Construction Company sent a group of workers to the area; other railroad and construction crews followed.

The land company offered lots for sale on Sept. 10, 1889, asking high prices. On the same day, Tubb Town, a local squatters’ settlement, moved lock, stock and barrel into the new city in its entirety. The town of Newcastle was incorporated in October, and held its first election Nov. 12, 1889.

Burlington construction crews, meanwhile, arrived at the present site of Newcastle within a few days of the election, and by Dec. 1 had completed a seven-mile branch line north to the coal mines at Cambria. The Burlington Railroad had its coal, and Wyoming had a new town.

In its early days, Newcastle had a wild reputation. Cowboys, miners and railroad workers from nearby sites found the town–with its 14 saloons, numerous dance halls, prostitutes and gambling–a great place to spend leisure time and hard-earned money. Early newspaper articles cite several instances of miners “shooting up the town,” and the city’s first ordinance banned the discharge of firearms within the city limits.

The townspeople quickly began whipping their new home into shape. Yard tracks were laid, a roundhouse was built and Newcastle was established as a railroad division headquarters. Kilpatrick Brothers & Collins built a large multi-purpose structure that temporarily served as the community hall, schoolhouse and church.

During the population boom that first winter, a housing shortage led residents to camp in dugouts along the banks of Cambria Creek. The first business in Newcastle was the Kilpatrick Brothers & Collins Commissary. Eleven more buildings were erected in 1890 and Newcastle quickly began to grow.

Settlers moved in even before the town had a reliable water supply. Early entrepreneurs hauled barrels of water from Fuller Springs in Cambria, selling it for 10 cents a gallon. Soon the Burlington Railroad, which needed more than 66,000 gallons of water for daily operations, built a temporary pipeline from Cave Springs. A permanent, seven-mile pipeline from Cambria Canyon, seven miles northwest of Newcastle, was completed in December 1890.

The town’s first mayor was Frank Mondell, who later would represent Wyoming for 26 years in the U.S. Congress—with a .45-calibre bullet lodged close to his spine. After the town’s first boom that winter began to subside, it became clear there were more gamblers and other lowlifes than the community could support. Mondell and his town council gave the city marshal a list of 20 men they demanded should leave town in 24 hours. But a hotelkeeper, who had extended credit to many of the rowdies but had yet to collect his money, shot Mondell. Mondell carried the bullet in his back the rest of his long life.

Unfortunately, illness raged in early Newcastle before town founders were able to make plans for a hospital. In 1900, a smallpox epidemic left the whole town quarantined, and later diphtheria and scarlet fever epidemics reduced the town’s productivity and population. “Pest houses” provided care for single men who had no family or wives to care for them. Still, the demand for space for patient care was so great that during epidemics, doctors convinced the madam of the local brothel to move her girls to a hotel and donate their rooms for the cause.

Early Newcastle residents enjoyed frequent festivities and entertainment. Their first Independence Day celebration also celebrated Wyoming’s upcoming admittance into the United States, as statehood was due to become official on July 10, 1890. Residents went all out for the festivities with decorations, a 114 gun salute—one gun for each year since nationhood in 1776—a parade, speeches, horse races, a baseball game, foot races, fireworks and a boisterous all-night dance party.

People came from neighboring communities to attend the Castle Theater, built by John Owens in 1890 and the only theater within100 miles. For a 50-cent box seat fee or a 25-cent general admission fee, the public could see entertainers sing, eat fire, perform contortionist routines and execute feats of superhuman strength.

The town welcomed its first circus in 1892, and the excitement preceding the performance was matched only by the stampede that resulted when local horses saw exotic camels and elephants roaming the town. 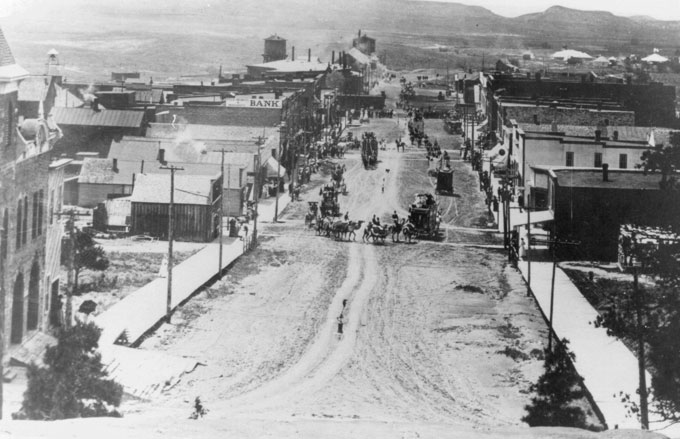 That same year, a dam was built across Cambria Canyon northwest of Newcastle. It created a reservoir, Lake Mondell, named for the politician, which for a brief time was a popular place to boat and swim. Two years later, torrential rainfall caused a flood that washed out the dam; it was never rebuilt.

On April 25, 1903, more than 2,000 people crowded Main Street to hear President Theodore Roosevelt speak. The president, then on an eight-week, 262-speech tour of the West, was cheered by locals and flag-waving school children as he walked a flower-strewn path from his train to a platform. He spoke for half an hour, thanking Wyoming’s congressional delegation for its support, detailing the recent federal irrigation law, and advocating for good citizenship and common sense.

Later, Hunyadi Beach, east of Newcastle on Salt Creek, was likewise a popular recreational area with opportunities for boating, picnicking—and dancing. It was finally abandoned in the 1920s.

Slowly, over the decades, Newcastle moved toward better systems of health care. Mrs. William Cash, an early Newcastle resident, started a birthing center to care for laboring moms and babies, which operated from 1918 through 1922. By the 1920s, Newcastle boasted two hospitals; one closed in 1938, and one in 1940. 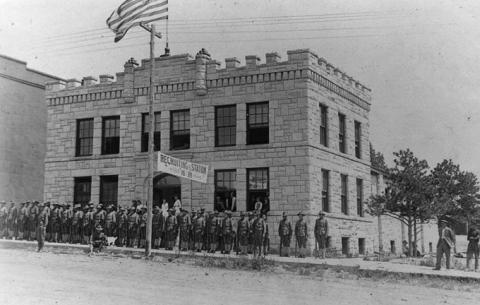 Dr. E.J. Carlin opened a medical practice in the early 1940s, but moved away in 1948, taking his practice with him. Meanwhile, the Newcastle and Upton Lions clubs had petitioned the Weston County Commissioners for a permanent hospital. The idea was approved in 1945, but due to short funds the hospital did not open until September 1949. In 1986, another hospital opened, and Weston County Health Services continues to serve patients there today.

Such advancements, coupled with steady success in the nearby coal mines, led Newcastle to benefit from a reputation of prosperity and old-fashioned work ethic.

The first Newcastle residents were coal miners and railroad workers. The 1900 census counted 756 people in the city, with a steady climb to 3,395 by 1950 as workers continued to move their families to the area. City government and schools also grew and began to establish themselves as primary local employers.

In 1927, the Wyoming Refining Company established an oil refinery on Main Street, and the refinery remains one of Newcastle’s primary employers. In recent years the refinery has been plagued by spills, leaks and soil contamination, and has paid a lawsuit settlement and state and federal penalties. In 2011, the refinery was purchased by Black Elk LLC, of Houston, which has announced plans to upgrade pollution protections and increase output.

Like their early counterparts, many Newcastle residents work or operate cattle ranches. Another enduring employer is the former Burlington Railroad, now merged with the Santa Fe Railroad as BNSF, which still has a headquarters right on Main Street. Two nearby coal mines (Arch Coal Company’s Black Thunder Mine and Kennecott’s Jacobs Ranch Mine near Wright, Wyo., about 65 miles west of Newcastle) attract commuting workers from Weston, Campbell and Natrona counties. Weston County Health Services operates a hospital, clinic and retirement home, offering employment in the medical and social work fields.

Pope & Talbot operated a sawmill in Newcastle until 2000, when a reduction in public timber availability left the business running at half speed. The Wyoming Department of Corrections’ Wyoming Honor Conservation Camp & Boot Camp is located just north of Newcastle and provides work experience for prisoners who have met “good behavior” standards.

And finally, Newcastle’s location on the fringes of the Black Hills of South Dakota brings a trickle of tourists that becomes a steady flow in summer. The 2010 census counted 3,532 people in Newcastle, just 137 more than in 1950.

Nicole Lebsack grew up in Newcastle and attended the University of Wyoming. She recently graduated from the University of Missouri-Columbia with a master’s degree in journalism with an emphasis in news editing/design and works at the Wyoming TribuneEagle. Her articles and page designs have appeared in the News Letter Journal and Columbia Missourian newspapers.

Newcastle Chamber of Commerce, 1323 Washington Blvd.: The Newcastle, Wyo. chamber is open Monday through Friday from 9 a.m. to 5 p.m. For more information, visit the website.

Diamond L. “Slim” Clifton site: Local storytellers often present the tale of Diamond L. “Slim” Clifton, a drifter who passed through Weston County and was hanged in 1903 in Newcastle, Wyo. by an angry mob for the robbery and murder of a Gillette couple. Visitors can read his story and see the hanging site on Main Street across from the train station.

Cambria Casino, known to locals as the Flying V Lodge, was added to the National Historical Register in 1980. It was a hotel, dance hall and recreational area beginning in 1927, and more recently was a restaurant and inn. That business closed in the early 2000s, but the Tudor Revival-style building, now operated as a commercial hunting lodge remains on the original site approximately eight miles north of Newcastle on state Highway 85.

Antlers Hotel, 205 W. Main: The first building constructed in Newcastle, Wyo. was the Kilpatrick Brothers & Collins Commissary, built in 1889. The structure later became the Antlers Hotel, which closed in 1979 and remained out of business for nearly three decades. It was purchased in 2007 and slowly restored to its former glory. Today visitors can enjoy a meal or a drink in the historical building’s newly renovated restaurant, coffee shop and bar.

The Anna Miller Museum, 401 Delaware Ave.: Newcastle, Wyo.’s status as a home base for a National Guard troop, first organized in 1899, led to the construction of an armory building. The troop became a cavalry troop in 1914. The sandstone stable, built in the mid 1930s, has been used since 1966 by the Weston County Historical Society to house Anna Miller Museum. The building was named to the National Register of Historic Places in 1994.

Visitors won’t want to miss the varied collection of artifacts and memorabilia, including period rooms from the 1930s, the one-room Green Mountain Schoolhouse, model pioneer cabins, Cambria artifacts, fossils and a county store. Admission is free, and the museum is open year-round Monday through Friday from 9 a.m. to 5 p.m., with additional hours on Saturdays from 9 a.m. to noon from June through August.

Toomey’s Mills/the Old Mill Inn, 500 W. Main Street: In 1905, George C. Getchell built a flour mill in the middle of Newcastle, which was later purchased by D.J. Toomey and became known as Toomey’s Mills. It produced flour products, gaining notoriety for its Toomey’s Flapjack Flour, until the mill ceased operations in 1965. In the 1970s, it was converted into a restaurant and bar called The Old Mill Inn, enjoying local popularity until it closed in 2010. The property was placed on the National Historical Register in 2008, and in 2011 was purchased by Maverick, Inc., which owns a number of gas stations and convenience stores around the West.