The Americans with Disabilities Act was far in the future when a group of Lusk, Wyo. residents first met to propose statewide legislation to make buildings, sidewalks and other public areas accessible for disabled people.

In 1969, Gov. Stan Hathaway signed a bill into law that banned architectural barriers in new , state-funded buildings, making Wyoming one of the first states to adopt such legislation. A similar federal law had passed barely a year earlier, but the more comprehensive federal act, the Americans with Disabilities Act, didn’t become law until 1990.

When the first Wyoming law passed, it had wide, bipartisan support. The ease of final passage, however, belied the extensive efforts to make it law. 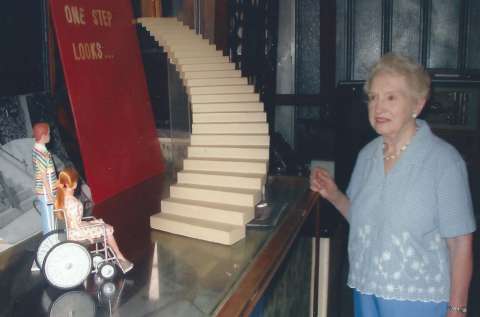 Like many other landmark laws, much of the credit for Wyoming’s pioneering “barriers” law goes to an all-volunteer organization, the 1,800-member Wyoming Federation of Women’s Clubs. A small group of volunteer citizens from Lusk started the drive—and one woman, Helen Bardo—played a major role.

Years after a barriers law passed, Mrs. Bardo reflected on where the effort originated. She told of a conversation she had with a good friend, Ruth Thomas, who commented on the difficulties Mrs. Thomas’ husband Sam had in getting into public places in his wheelchair. “If people only knew how one step looks to people in a wheelchair,” Ruth Thomas told Mrs. Bardo.

At the time, Thomas’ husband Sam had been wheelchair-bound for almost two decades. A University of Wyoming ROTC graduate, he was called to active service as an army officer in World War II.  During the battle of Attu in the Aleutians in 1943, he was shot and, for the rest of his life, paralyzed from the chest down.

After lengthy hospitalization in military hospitals, he returned to his hometown of Lusk where he carried on an active life, working with civic, 4-H and school groups and with his wife Ruth, raising two sons. For a time, he taught mathematics in the high school. Later, he operated a private accounting business and became a self-taught master woodcraftsman.

In the first years after his return to his hometown, he taught classes in the two-story Lusk High School. His classroom was on the second floor. The structure had no ramps or elevators. Several sturdy students often volunteered to carry him in his wheelchair to the top of the stairs so that he could teach the class.

The high school building was not unique—in those days, most public buildings in Wyoming had only stairs—nor was his immobility unusual. Like other Americans at any given time, up to ten percent of the Wyoming population faced difficulties from architectural barriers. Some barriers were so extreme that they kept people from conducting day to day tasks. Other architectural barriers diminished the ability of highly qualified people to get jobs or education. Individuals in wheelchairs were not the only ones affected. Many others, because of age or disability, had mobility problems.

After hearing the chance remark about the one step and reflecting on the barriers problems, Helen Bardo took up the cause of eliminating the barriers.

In some ways she was an unlikely crusader for the task. A Minnesota native, she gained wide recognition as a pianist, piano teacher and organist for community and school events in the Lusk area. She had moved to Lusk with her husband Dale in the 1940s where Dale worked as a compositor at the Lusk Herald, the weekly newspaper edited by his brother Gerald Bardo. Gerald and Dale had married sisters. Helen’s sister Jane was also a talented musician.

Helen Bardo told her fellow members of the Lusk Woman’s Club about the “one step.” Soon, the organization adopted the barriers program as the club project. Their proposed law, introduced in the 1967 session, passed the Senate but languished in a House committee to the end of the session.

Soon after, the club officers asked Sam Thomas to construct a display in order to illustrate mobility problems. Thomas skillfully completed a tall table-top display that captured the essence of the problem. Two figures, a woman in a wheelchair and a man on crutches, are shown at the bottom of a two-foot high depiction of numerous winding stairs. The many steps reach up in perspective to an open door at the top.  The caption explained “what one step” looked like to those with mobility problems.

The barriers issue had the support of the local Lusk Club, but the issue clearly needed broader exposure. In 1968 Helen Bardo and her Lusk Woman’s Club allies convinced the Wyoming Federation of Women’s Clubs to adopt elimination of barriers as a statewide project. Federation members across the state wrote letters and spoke with legislators. Bardo talked to groups throughout the state, often carrying Thomas’ display with her as an effective visual exhibit of the problem they sought to eliminate.

When the next session of the legislature convened in 1969, Bardo, Thomas and the Federation had done an effective job. The barriers law passed both houses and, in March 1969, Gov. Hathaway signed the bill into law. In October that year, Helen Bardo was among ten Wyoming citizens honored by Hathaway for their dedication to improving conditions for people with disanbilities.

The group turned its attention to curbs, another serious obstacle for mobility-impaired people. For the curbs effort, Thomas built a larger display—a 16-foot billboard that had to be carried in a stock truck.

While the curbs lobbying was underway, Bardo, by then a member of the Governor’s Committee for Employment of the Handicapped, noted the inaccessibility of the primary architectural symbol of the state—the State Capitol. At Bardo’s urging, members of the Federation successfully lobbied legislators to make the building accessible to all.

In the 1975 legislature, the Federation of Women’s Clubs pressed to make curbs along public streets accessible. The federation-drafted “elevator-curb cut [ramp]” amendment was passed by both houses and signed by Gov. Ed Herschler. At last, that “one step” along public streets would no longer be a barrier in Wyoming.

A year after Wyoming’s law took effect, the U.S. Congress passed a federal law mandating specific dimensions for curb cuts throughout the country. Wyoming, of course, had pioneered the effort.

Since those days, new public construction in Wyoming includes accessibility rules. All new curbs are built to accommodate immobilized individuals as well as to remain usable for the blind.

Helen Bardo—“Mrs. Barriers”—lived to see a comprehensive federal law banning barriers, architecturally and beyond. On July 26, 1990, President George H. W. Bush signed the Americans with Disabilities Act. Sam Thomas had died in 1978, but the estimated.45,000 Wyomingites who had similar disabilities finally could look to both state and federal law when they came across “that one step”—the step that for so long had denied them the access that was taken for granted by other citizens.

Wyomingites with mobility problems still face obstacles in older buildings that are only gradually becoming accessible. But through the efforts of Bardo, Thomas and the thousands of other “barriers pioneers,” more and more places can be enjoyed by all citizens regardless of mobility.

The Stagecoach Museum is located at 322 S. Main Street in Lusk. The museum features an authentic stagecoach from the Cheyenne-Black Hills Stage and Express Line as well as numerous 19th and 20th century relics from the area’s early cattle ranching and homesteading days. A second building houses everything from bathtubs to buggies to medical supplies and includes a recreated homesteader kitchen. Also on the grounds are a one-room schoolhouse and an old-time store. For more information visit the website linked above or call (307) 344-3444.