Green River, Wyo., was destined from its start to be a vital point along the nation’s information and commercial arteries. The town is located on its namesake river, as well as on the Cherokee Trail, the Overland Trail, the transcontinental telegraph route, the Union Pacific Railroad, the Lincoln Highway and the early day transcontinental airmail route. The modern site is also on the information superhighway—with three major fiber optic trunk lines running through town—and on numerous petroleum pipelines, Interstate 80 and, since 1994, America’s first intergalactic spaceport. 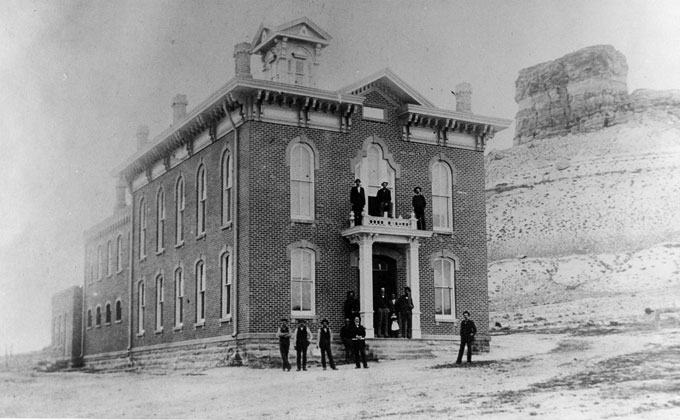 In 1862, the Postmaster General moved the overland mail route from the Oregon/California Trail across what’s now central Wyoming to a more southerly road believed to be safer from Indian attack. Stage stations, such as one on the south bank of the Green River near its confluence with Bitter Creek, were constructed every 10 to 15 miles along the route.

The station was on one of the routes of the older Cherokee Trail that were appropriated by the newer overland mail route. The stage station--stone structure, corrals, outbuildings and cemetery — was the seed from which the community of Green River grew. However, a small settlement called “Adobe Town” or “Old Town” developed on the northern banks of the Green River across from the stage station on lands homesteaded by early settler and entrepreneur S.I. Field. This settlement eventually became the city of Green River.

Although the town began with the stage station and overland migration traffic, it was the Union Pacific—the transcontinental railroad—that determined the town’s history. The U.P. originally planned to build a switching station including a railroad yard and roundhouse at the town site, but chose instead to establish the switching point 13 miles west in Bryan, Wyo., near the Black’s Fork of the Green River. The U.P. did not wish to build the switching yard on land it did not own.

Tracks were laid through Green River in 1868. When the end of tracks moved west to Bryan, it became one of the wildest places in Wyoming and Green River’s population shriveled. Gold discoveries near South Pass in the late 1860s, nearly 100 miles to the northeast, further reduced the importance of Green River as a commerce center. Bryan to the west and Point of Rocks, a jumping-off point and stage station on the railroad to the east competed to supply the miners. At the same time South Pass City, near the gold diggings, became the Sweetwater County seat.

Thus, “Old Town” was virtually deserted when Major John Wesley Powell launched his boats into the Green River there at the start of his expeditions of 1869 and 1871. Powell and his companions explored the Green and Colorado rivers and the Grand Canyon. S.I. Field maintained a store in Green River, which, try as they might, Powell’s men could not drink dry of whiskey.

In 1872, fate played another hand in the history of Green River, rescuing it from becoming a ghost town. Drought dried up the Black’s Fork River, making the use of Bryan as a switching station untenable. S.I. Field and the U.P. came to an agreement about using parts of the Green River townsite for the railroad facilities. Commerce and life returned to the abandoned buildings. The roundhouse was moved from Bryan to its new home. Construction flourished, and Green River became a U.P. town. Railroad operations increased, eventually making the Green River rail yard one of the busiest in the nation.

Steady increases in the railroad’s infrastructure, meanwhile, spurred growth in mineral extraction and livestock production. The railroad opened national and regional markets to local extraction and agricultural industries. Hotels, restaurants, saloons, stores, schools, churches, a brewery and homes—many of them moved from Bryan—sprang up around the original “Old Town” site.

Much of Green River’s history is tied to mineral production. Southwestern Wyoming is rich in oil and gas, and in trona, a mineral that is mined and processed into soda ash, which is used to make glass, cleansers, fertilizer and many other products.

Between 1896 and the end of World War II, the Green River Soda Works converted soda solutions from a well into cleanser. (The well’s drillers had been prospecting for oil, but the well produced soda water instead.) In 1919, the Liberty Potash Company established a potash plant that operated into the 1940s. (Potash is a water soluble form of trona. Instead of mining and crushing rocks, its developers extract the soda from the water).

In 1928, Wyoming Oil Products built an oil shale refinery in Green River, but failed to develop this abundant resource—probably because, as with many processes tried since, it proved too expensive to get the oil out of the shale.

In 1938 Mountain Fuel Supply Company located huge trona deposits west of Green River, once again while searching for petrochemicals. These trona deposits, making up the overwhelming portion of the known reserves in North America, were heavily mined over the following decades with Green River housing much of the mining population and supporting businesses. A series of natural gas booms starting in the 1970s has continued to boost economic development in the region.

However, Green River is perhaps best known for its 1931 ordinance prohibiting door-to-door selling unless the salesman was invited to a residence. The ordinance was enacted in order to protect sleeping railroad shift-workers from the swarms of door-to-door salesmen spawned by the Great Depression. This law became a model adopted by other communities throughout the nation, and such ordinances are commonly referred to as Green River ordinances.

Green River’s population has fluctuated with its economic fortunes. Once it was rescued from near ghost town status in the 1870s, the community grew steadily, with a significant increase coming after World War II. Transportation spikes created by the Lincoln Highway and I-80 helped the town to continue its growth. 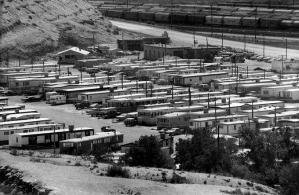 Gas booms in the 1970s and 1990s put housing at a premium. In the 1970s, the canyons surrounding Green River sported numerous squatter camps of gas-field workers. The economy still experiences recurrent boom-and-bust cycles with a substantial amount of housing added to the town in the 1990s and the early 21st century.

In 1994, the Green River City Council, apparently as a joke, approved naming the community airport “The Greater Green River Intergalactic Spaceport.” To date, all air traffic to and from the facility has remained within this galaxy.

Today Green River is a modern community with an old-time atmosphere. The U.P. roots of the town are evident in the downtown architecture, and the city remains one of the few places where one can find such a large collection of intact U.P. structures. It’s not hard for a visitor to imagine what a late 19th century railroad town looked like at a time when the U.P. painted all its buildings the same shade of red. The railroad, so instrumental in the town’s development, remains a major employer in town.

Sweetwater County Historical Museum. "The Castle Rock Sign," accessed April 15, 2020 at https://www.youtube.com/watch?v=AHcu4w6l9xA. A 93-second You Tube video about the sign announcing the town's name that stood for decades on top of one of the big rocks above Green River.

Terry A. Del Bene is an archaeologist and freelance writer, who worked for many years for the Bureau of Land Management in Wyoming before retiring to Alaska in 2010. His books include The Donner Party Cookbook; Images of America: Green River, Wyoming and The Settlement of America.

South 2nd East Street in the middle of Green River, Wyo., will lead you to Expedition Island Park. Designated a National Historic Landmark in 1968, this is the site where John Wesley Powell launched his exploration of the Green and Colorado rivers in 1871 and possibly in 1869 as well.