Flaming Gorge Dam was completed in 1964 on the Green River, which flows south out of Wyoming into Utah and later joins the Colorado River. The dam, named for Flaming Gorge canyon just upstream, was built as part of the Bureau of Reclamation's Colorado River Storage Project. Dams on the Colorado and its tributaries today provide water and hydropower to southwestern states. 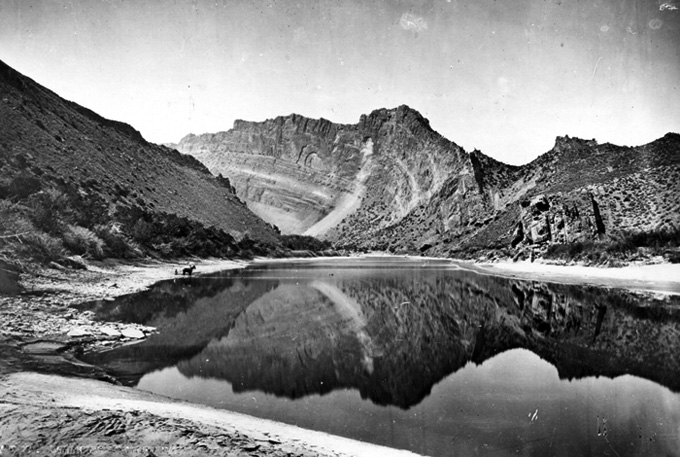 The dam itself is in Utah, but most of the reservoir is in Wyoming and supplies both hydropower and tourism to the town of Green River, Wyo. The dam also helps to equalize river flows, storing water in wet years or seasons for release during dry periods.

The first inhabitants of the area were most likely the people of the Fremont culture, who were displaced around A.D. 1000 by the Shoshone and Ute tribes. The first white men in the area, probably fur trappers beginning in the early 1800s, included William Ashley and his party who explored the Green by boat and trapped beaver there for several seasons in the 1820s. In 1869, explorer John Wesley Powell took his first boat trip down the Green and Colorado rivers. Powell described the canyon as "a flaring, brilliant, red gorge that may be seen from the north a score of miles away,” and named it Flaming Gorge.

Construction of Flaming Gorge Dam was motivated in part by the 1922 Colorado River Basin Compact, an agreement among the states along the Colorado River. The compact divided the states into two basins--California, Nevada and Arizona in the lower basin, and Utah, Colorado and Wyoming in the upper—and allotted 7.5 million acre-feet of water per year to each basin. (An acre-foot is enough water to cover an acre of land a foot deep—around 326,000 gallons.)

With more people using more water in the states in the lower basin, it soon became clear that the upper states might not be able to count on their share of the water unless dams were built to store the water and regulate its flow. Engineers and geologists began investigating the Flaming Gorge dam site in the 1940s. On April 11, 1956, Congress passed the Colorado River Storage Project Act to fund this and other projects.

In 1957 and 1958, to commemorate the start of the dam’s construction, residents of Green River, Wyo., celebrated "Flaming Gorge Days.” Participants dressed for the occasion old-time clothes and the men wore beards—“the hirsute male custom of range and mining days," according to the Sweetwater County paper Wyoming Trails.

Local citizens realized the opportunities for tourism and the significant economic boost that the construction of the dam could provide. The February 1957 issue of the same paper advertised the last chance for people to take guided trips "to visit all of the area which will form Flaming Gorge Lake within the next few years" and advised visitors, "Investigate the possibilities of establishing yourself in Sweetwater County,” while touting the “favorable tax structure” and considerable natural resources in the area. 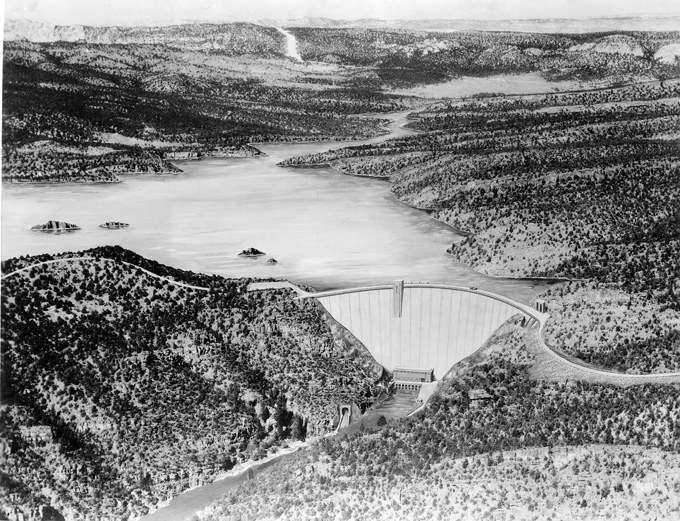 Construction of the dam did indeed bring more residents to the region; according to the official Bureau of Reclamation history of the project, the construction temporarily tripled the population in Utah's Daggett County. Presumably there was also some effect in Sweetwater County.

Construction of the dam proceeded uneventfully. It took seven years to divert the river, clear and prepare the dam site in a canyon downstream of Flaming Gorge itself, build the 500-foot tall concrete dam and construct a power plant with turbines that would be turned by the flow through the outlet. 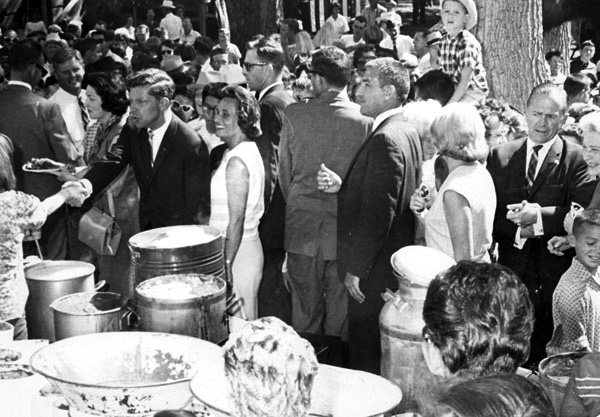 In the 1960s, University of Utah professor Jesse Jennings directed an archaeological and historical survey of the land that would be flooded by Flaming Gorge and Glen Canyon dams. The attention given to the Green River area was less extensive than that received by archaeologically richer Glen Canyon further downstream in southern Utah and northern Arizona. Although further study of local history in the Flaming Gorge area was recommended, this never occurred.

Area resident Alonzo Jarvie was hired by the Bureau of Reclamation to work with his former neighbors whose property would be flooded. Houses had to be moved or destroyed because they would be a hazard to users of the lake; residents were compensated and offered help to relocate.

Some people were not happy about these disruptions to their lives. According to one story from this time, Minnie Rasmussen, a longtime resident, was the last rancher to leave the settlement of Linwood, near the Wyoming-Utah line. She invited Jarvie and the Bureau of Reclamation contractors to tea and said she would consider their offers of help. Rather than accept their assistance, however, she burned down her own house that night.

On August 17, 1964, Lady Bird Johnson, the first lady, stopped at Green River, Wyo. on a tour of the West to dedicate the new reservoir. "This will be the first time," declared the Green River Star, "that Green River and Sweetwater County have ever been exposed to such national publicity."

Residents of the town prepared to make the event a success. The Star urged all businesses in Green River to fly the American flag and close for two hours on the afternoon of the ceremony. The mayor hoped that "all of our citizens, dressed in western attire if possible, [will] participate in the ceremonies." 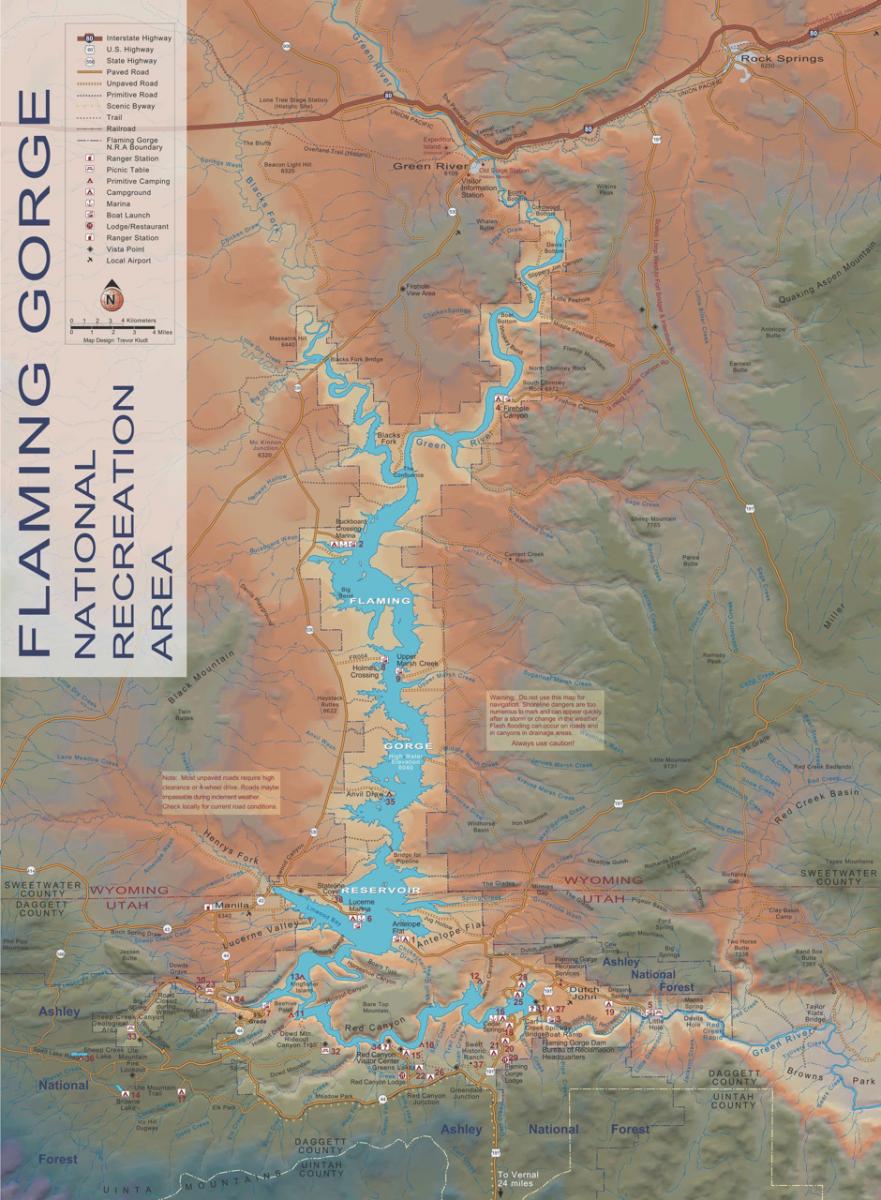 After her speech, Lady Bird Johnson was welcomed at a short reception and sampled a buffalo barbecue. Locals looked forward to more tourism, which arrived as predicted; after Labor Day of that year, headlines boasted, “26,000 Visitors in Flaming Gorge Area on Weekend," at a time when fewer than 4,000 people lived in the town of Green River.

On Oct. 1, 1968, Congress created the Flaming Gorge National Recreation Area, which encompasses 207,363 acres of land and water almost equally divided between the states of Utah and Wyoming.

Since its construction, Flaming Gorge Dam has been operated in concert with other dams of the Colorado River system. In 1984, when heavy rains brought floods to Colorado tributaries that broke records dating back to 1897, water was trapped in Flaming Gorge Reservoir and in Lake Powell behind the Glen Canyon Dam that would otherwise have damaged communities further downstream.

Instead of being used to irrigate nearby arid lands and to develop federal project farms like such projects as Buffalo Bill or Pathfinder dams in the Missouri drainage basin, Flaming Gorge Dam is used mostly to regulate flows—and offers summer-long boating and fishing opportunities for locals and tourists. The reservoir, which extends as far as 91 miles north of the dam, has a total capacity of nearly 3,8 million acre-feet.

The 344 million kWh of electricity generated by the power plant at Flaming Gorge Dam and the 2.5 million visitors who come every year to the national forest containing Flaming Gorge National Recreation Area are important benefits for Sweetwater County and the state of Wyoming.