The Fountain and the Mural: Remembering a Tragic Cowboy Welcome

The Fountain and the Mural: Remembering a Tragic Cowboy Welcome

Halfway from Old Main to University Avenue on the University of Wyoming campus, a seldom-noticed stone drinking fountain blocks the long, straight sidewalk. Almost hidden among the summer flowers at the base, carved words note that it was built in memory of Lowell O’Bryan, who died Oct. 10, 1922. Above the stone inscription and the now inoperable fountain is a brass plaque: “He gave himself . . .” 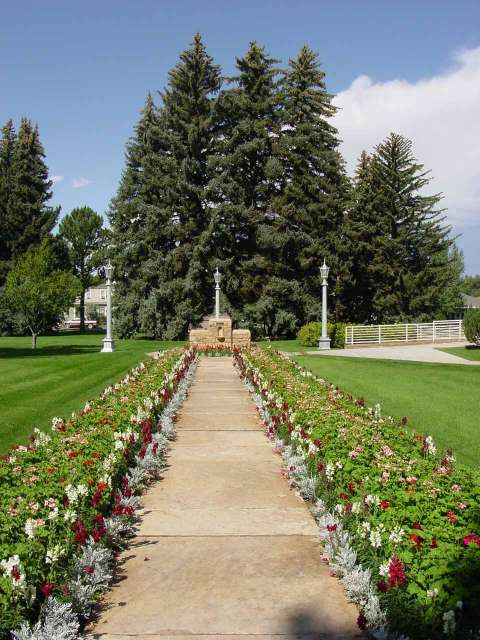 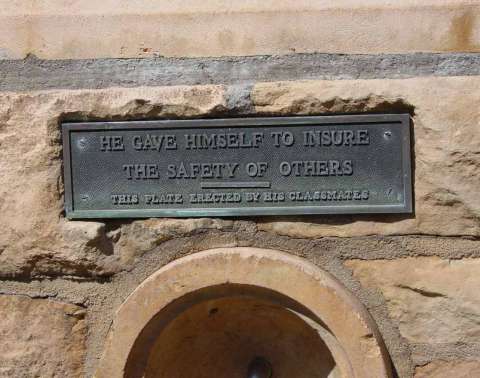 Ironically, the fountain shares a historical connection with the more familiar work of art, the painted mural hanging on the west wall of the student union ballroom. Both the fountain and the mural recall aspects of the same event in the university’s history. The mural recalls the “cowboy welcome” given to newly arriving UW President Dr. Arthur G. Crane. The fountain memorializes the tragic death of a student involved in organizing the welcoming ceremony.

In August 1922, the board of trustees announced that Crane, then serving as president of a college in Edinboro, Pa., had accepted the UW presidency. He would come to Laramie in October to begin his new job. Consequently, a group of students decided to greet the new “prexy” in traditional western style. With the help of faculty advisors Dr. Samuel Knight and Coach John Corbett, they planned an elaborate ambush: They would dress as cowboys and, on horses, meet the new president’s automobile as it was coming down through Telephone Canyon into Laramie from the summit of Sherman Hill to the east of the city.

On that sunny October morning, nine masked men on horses, later joined by about 50 “cowboys bedecked in regalia,” according to UW historian Deborah Hardy, ordered Crane out of his car and into a stagecoach where he was joined by outgoing President Aven Nelson and Board of Trustees Chairman W.C. Deming. Crane’s family continued on to town in his family automobile.

Did Crane enjoy the unique welcome? Probably not. Hardy describes a photograph taken at the time: “Out from the window he peers like a prisoner; he is neither smiling nor waving nor eagerly surveying the sagebrush around him. If anything, the camera catches a tone of disapproval for this youthful, high-spirited prank.”

The riders escorted the coach to the east edge of Laramie where the three occupants were transferred into a new Marmon automobile for the ride to the grandstand of the nearby fairgrounds, near today’s Washington Park. There, students, faculty and townspeople welcomed Crane and his family, Student President Fred Parks presented Crane with a ten-gallon hat and the crowd watched two cowboys ride bucking horses. Later, after a few speeches, the assemblage adjourned to the university commons for a special dinner.

But the festive ceremonies were dampened by an accident that had occurred earlier in the morning as the cowboys were preparing for the ambush. One of the best horsemen on campus, Lowell O’Bryan, a 23-year-old junior, helped ride out the mounts for the Crane reception—that is, ride them until they calmed down and stopped bucking. O’Bryan was “topping off each horse as it was saddled in order to ensure that no amateur should accidentally get on an unsafe horse and be thrown,” Hardy reports.

O’Bryan intentionally made his mount buck; then, suddenly, the horse broke toward a wire fence. Fearing the horse would break through and into a group of students, “O’Bryan started to dismount, a feat no different than he has often accomplished in the course of his everyday work,” according to the report of the UW student newspaper, “but the saddle slipped and he was thrown underneath the horse, badly kicked and dragged about thirty yards before being rescued by his comrades.”

The Wyoming Student reported that he was “taken to the hospital unconscious. Dr. Robinson and Dr. Turner were called to attend him and at this hour O’Bryan’s condition is extremely critical …” Dr. Willard A. Robinson was the young man’s stepfather, with whom he lived while attending UW.

A week after the mishap, President Crane announced at the morning student assembly that O’Bryan had died. He never regained consciousness from the accident. The student newspaper published a special memorial edition, noting that O’Bryan’s death cast a “pall of sadness over the University.”

Accounts emphasized that every effort had been made to save his life. “A nurse and a physician have been constantly at his side and several other surgeons have been called into consultation. Several students have taken turns in sitting up with him,” the student newspaper reported. O’Bryan, a native of Santa Rosa, Calif., died at his stepfather’s home. He was 23.

“Lowell has been popular among faculty and fellow students,” the Wyoming Student obituary read. “He was studying agriculture and was active in the Agricultural Club and other college activities.”

Later in the decade, friends and classmates of O’Bryan raised funds to construct the memorial fountain. In 1939, to commemorate the first anniversary of the construction of the student union building, the university and the Federal Art Project hired Utah artist Lynn Fausett to paint a mural depicting Crane’s arrival. Originally hung in the student lounge and later in the grand staircase of the union, the mural was moved to its present location in the west ballroom in 2003, following restoration funded by the class of 1958. 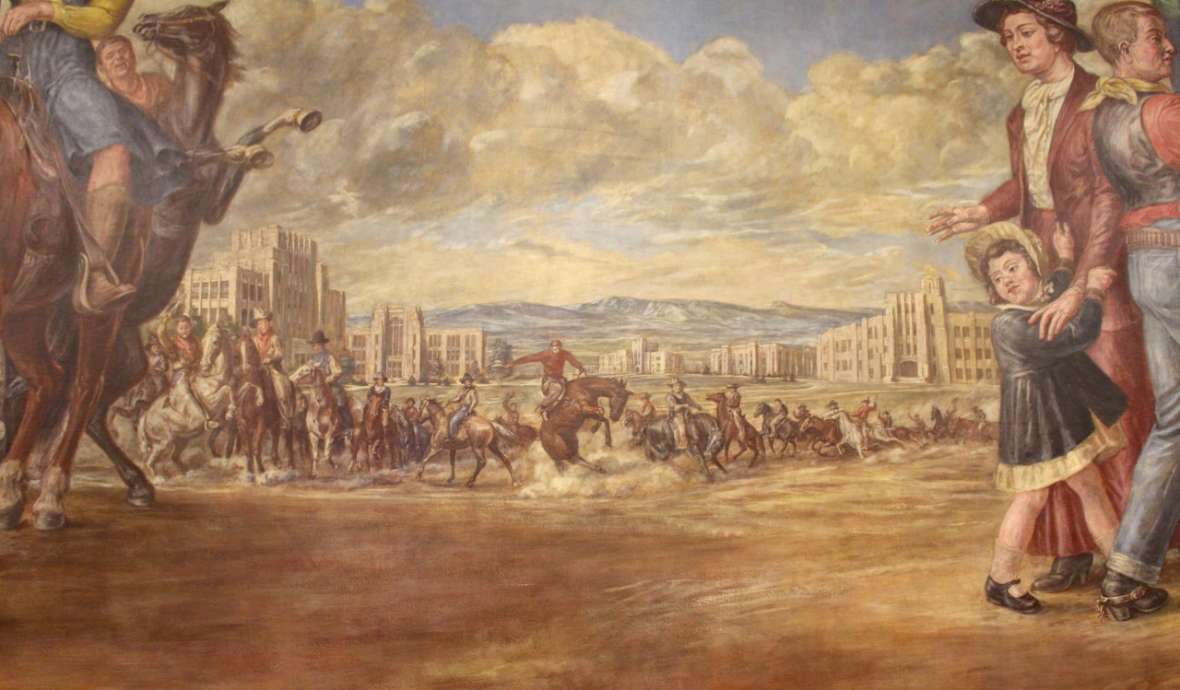 Five individuals significant to the university’s history are depicted in the mural—Crane, front and center; Nelson, next to him in black hat and suit; longtime university board secretary, faculty member and historian Dr. Grace Raymond Hebard on the left in a green skirt; longtime psychology Professor and Department Chair Dr. June Etta Downey in a red dress; and next to her longtime Greek and Latin Professor and Dean of Liberal Arts Dr. Justus Soule, in gray suit and red tie.

But did the artist include Lowell O’Bryan in the mural? No reference is made to the fact, either in the commemorative label below the mural or in the Branding Iron article published the week of its dedication on March 3, 1940.

Might he be the hatless cowboy on the rearing horse behind the main group at the center of the painting? Is he the distant, red-shirted cowboy on a bucking horse, right of center? One art historian contends he is the man in chaps, just left of center, the sole male figure facing away from the picture, only the back of his head visible.

Whether O’Bryan appears at all, the mural recalls the celebration of Crane’s arrival while the fountain west of Old Main memorializes the young man accidentally killed while preparing for the Old West welcome depicted in the painting.

The Wyoming Union—the student union at the University of Wyoming—lies just off the southeast corner of Prexy’s Pasture near the center of campus. The building’s west ballroom features the historic Lynn Fausett mural celebrating UW President Arthur Crane’s arrival on campus in 1922. Also available are various meeting spaces and dining options, the university store, copy center and much more. Visit the website linked above for more information.