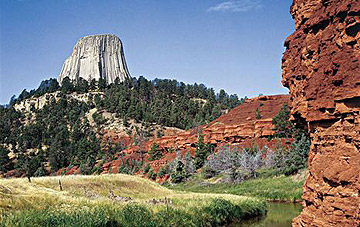 Rising 1,267 feet above the Belle Fourche River, Devils Tower is hard to miss. In fact, the formation of this distinctive rock figures prominently in the sacred legends of several American Indian groups who know the tower as Bear Lodge or Bear’s Tipi, among other names. Today, more than 20 tribes have established ties to the tower, and many groups visit the site to perform traditional ceremonies every year.

The tower of columnar basalt formed when molten rock intruded into overlying sedimentary rock and cooled into columns, which developed vertical cracks as they shrank. Eventually the overlying rock eroded to reveal the igneous rock beneath.

Devils Tower National Monument was the first national monument in the U.S., declared in 1906 by President Theodore Roosevelt. The grounds cover about two square miles in the center of Crook County and are open for hiking and climbing. Geologists recognize the hexagonal basalt columns of the tower as the neck of an ancient volcano, the rest of which has eroded away. Indian legends call the place Bear Lodge of Bear’s Tipi and tell of a rock that grew higher and higher to lift two little girls beyond the clutches of a bear that was pursuing them.

Today, more than 20 tribes have established ties to the tower, and many groups visit the site to perform traditional ceremonies every year

The rock rises 867 feet from the ground and 1,282 feet above the Belle Fourche River. The base diameter is around 1,000 feet.

The Devils Tower visitor center is located three miles from the park entrance and contains information about the natural and cultural history of the site. Seven miles of hiking trails are located in the park. The tower is known for its cultural significance as well as its natural beauty. Artifacts, plants, rocks and wildlife must not be disturbed. The speed limit for vehicles in the park is 25 mph.

The monument is open 24 hours per day year-round, when weather permits. For admission and camping fee schedules, and for visitor center hours, see the National Park Service’s website on the monument, or contact the Devils Tower National Monument Office at (307) 467-5283.