Riot at the 12th Wyoming Legislature: Fisticuffs on the House Floor

Riot at the 12th Wyoming Legislature: Fisticuffs on the House Floor

A photograph that hangs in the third floor lobby of the House of Representatives in the Wyoming State Capitol recalls the most disorderly legislative session in state history. The photo, a composite of all the Democratic Party legislators of 1913, shows a tear in the paper that cuts across the face of T.C. Diers, a banker from Sheridan.

According to legend, the rip resulted from a riot on Jan. 20, 1913, the fourth day of the session, in which Republicans and Democrats fought hand-and-fist during a 45-minute shouting match over who should sit in the speaker’s chair. 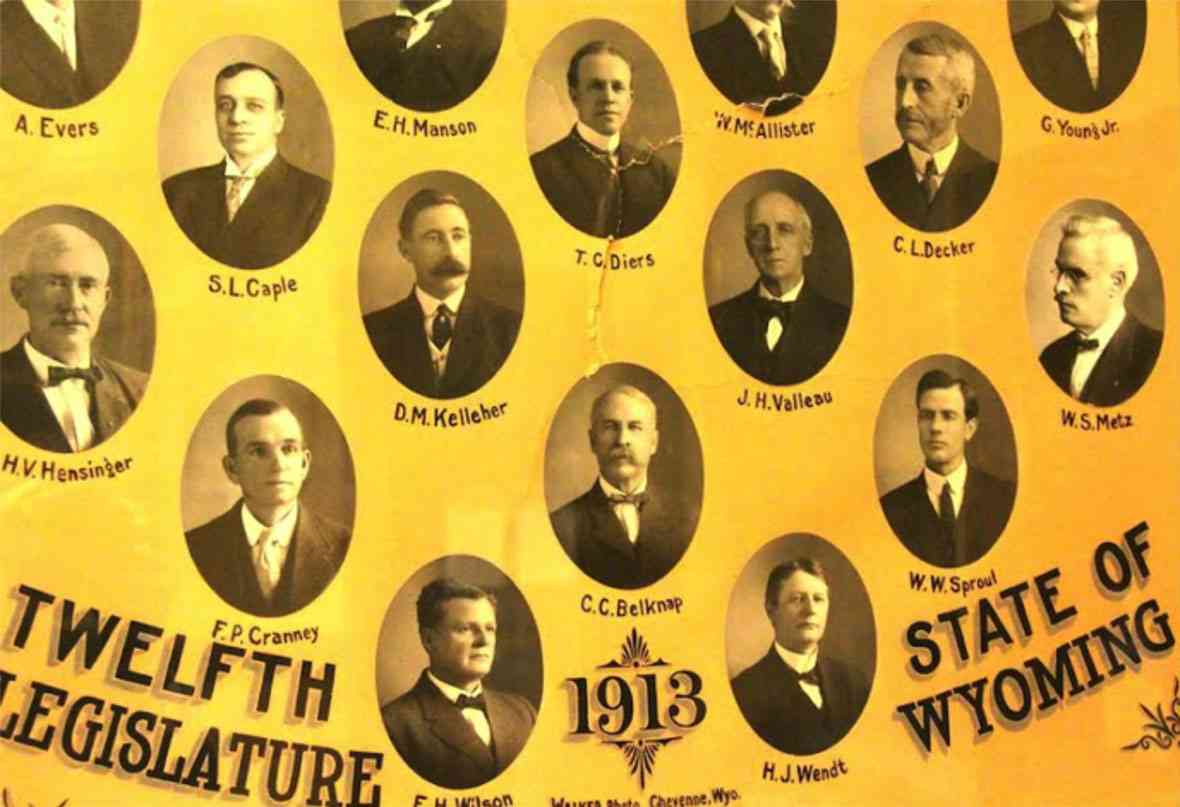 Twenty-six years later, John C. Thompson, who had reported the story in the Wyoming Tribune, recalled the episode in his In Old Wyoming column in the same paper, sealing the story’s place in legislative lore.

Wyoming had been a state since 1890; the 12th session of its Legislature convened in January 1913. The stakes were very high. At issue was the Democrat-Republican balance of an elections committee that would determine the outcome of three contested House races, and thus gain power over the party balance of the entire House.

That, in turn, meant power in selecting the next U.S. senator. At that time, voters did not directly elect senators, leaving that duty to the Legislature. The two leading candidates were Republican F.E. Warren, a U.S. senator since 1895, and Democrat John B. Kendrick from Sheridan.

At one point during the fight on the House floor, one representative supposedly smashed the photograph over another lawmaker’s head, tearing the image and marking their battle in history. News reports filed at the time of the fracas, however, do not substantiate that part of the story. 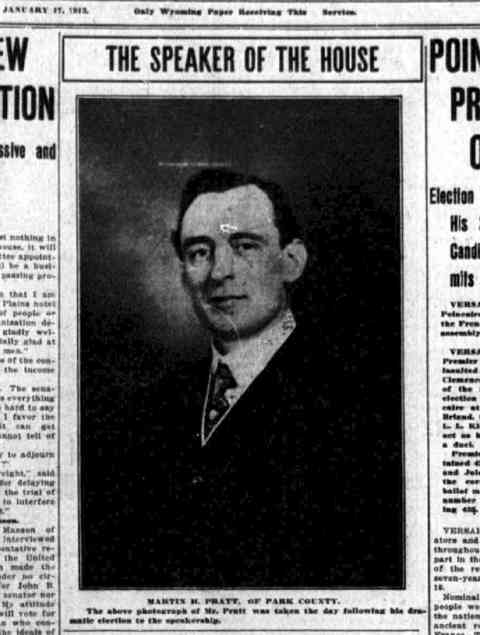 The next day, House members voted to scrub all reference to the battle in the House Journal, the official record of the session. But John C. Thompson, a reporter for the Wyoming Tribune, preserved the story in remarkable play-by-play reportage published later that day. The House lawmakers also broke convention by setting the portraits for each party in separate frames rather than a single frame of all representatives, a testimony of the animosity that prevailed that year.

The battle had its roots in the tense political atmosphere of the 1910s, when progressives, Republicans and Democrats all fought for superiority in Wyoming and across the nation. In 1912, former Republican President Theodore Roosevelt had broken with the conservative President William Howard Taft and the Republican Party to form his own Progressive, or Bull Moose Party. Roosevelt’s candidacy split the Republicans both nationally and in Wyoming, allowing the Democrat Woodrow Wilson to win the presidency that November with less than half the popular vote.

Those same divisions penetrated Wyoming politics as well. Joseph M. Carey, whose political career stretched back to the earliest days of Wyoming Territory, had served as an able Republican U.S. senator in the early 1890s until his party, under Warren’s influence, had refused to renominate him in 1895. In 1910, he ran for governor as a Democrat and won, with a coalition behind him of Democrats and progressive Republicans; he was seen as an antidote to the so-called Warren machine, which many voters felt had become too powerful if not corrupt, according to Wyoming historian T.A. Larson.

Early in 1912, while Senator Warren stayed loyal to Taft, Carey had been one of six governors who publicly urged Roosevelt to mount a third-party campaign. Similarly, in the Wyoming Legislature, some lawmakers had pledged to support progressive candidates for the U.S. Senate.

The Wyoming House membership—almost equally split between the Democratic and Republican parties—reflected the political divisions of the time. In the 1913 session, Wyoming’s 57-member House consisted of 29 Republicans and 28 Democrats. Martin Luther Pratt, a merchant from Powell in Park County and a progressive who had run as a Republican, decided he would not caucus with the Republicans and would run for speaker of the House. Pratt and one other Republican joined the Democrats, giving them the majority in the House—and giving Pratt the speakership. The Democrats elected him and presumed he would fall into their ranks, giving them a majority.

Historian Larson called Pratt “a neophyte, a freshman in the House who would have had no conceivable claim to the speakership were it not for his balance-of-power position and overweening ambition.”

As Larson tells it, Republican newspapers asserted Gov. Carey persuaded Pratt and Rep. E.H. Manson of Superior, a coal-mining town in Sweetwater County, to side with the Democrats, in hopes of sinking Warren’s chances of reelection to the Senate.

Instead, Pratt remained aloof from both parties, insisting that if either went against his will he would use his power to favor the other party. In this way, he held the balance of power in the House. That in turn, would have put him in a position to appoint a committee that could seat a progressive Republican instead of Republican F.E. Warren in the U.S. Senate, a promise Pratt said he had made to members of his home district in Park County.

In the second week of the session, Pratt at one point left the chair in order to debate from the floor, and Democrat Speaker Pro Tempore Rep. William J. Wood, of Crook County seized the speaker’s chair. From the chair, Wood called for a vote on a crucial question, which brought the seething tension to a boil: the makeup of a substitute elections committee that would decide the three contested races for state representative that could swing the race for U.S. Senate.

Democrats had contested the results of three races in Lincoln County, where they believed three Republicans had won only because the Diamond Coke and Coal Company pushed many foreign workers to go to the polls and vote illegally.

The outcome of those races was crucial. If the committee had a majority of Democrats, it would most likely rule that Democrats had won the three races, which could provide enough votes to oust Sen. Warren and replace him with Kendrick.

Now, House Democrats provided a substitute list for the elections committee, which would give them the majority, and, incidentally, remove Pratt from his position as elections committee chair; apparently they thought he was unreliable. Pratt claimed Wood was out of order in calling for the vote and demanded Wood leave the chair.

When Wood refused to leave the chair and again called for a vote, Pratt sprang onto the platform and shoved the still-seated Wood off the dais. Wood landed on the floor with his chair on top of him. There followed a back-and-forth of motions and counter-motions, calls for adjournment and calls for votes.

At several points Pratt and Wood stood side by side on the platform at the front of the chamber, each trying to seize control through motions while a mass of shouting representatives crowded in and traded blows. 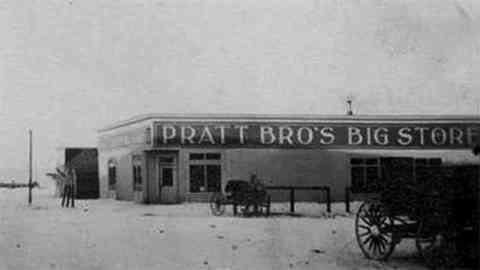 Pratt sent a message downstairs to Gov. Carey declaring that the chamber was “beyond control” and in need of assistance, according to Larson. Carey declined to intervene. Meanwhile, longtime Union Pacific lobbyist Charlie Irwin, a very large man well known in Capitol circles, jumped on the dais and shouted for order. But House members and people in the visitors’ gallery shouted him down.

Finally, after 45 minutes, the House members managed to call a truce and agreed to adjourn until 2 p.m. When they returned from lunch they immediately called for another adjournment until the following morning, ending perhaps the most violent episode perpetrated in the Wyoming Capitol.

The next morning, the Democrats agreed to remove their list of substituted names for the elections committee. Republicans compromised by removing Pratt and one other of their party from the committee.

A few days later the lawmakers settled the contested races and also voted to retain F.E. Warren in his seat in U.S. Senate. Kendrick would be elected governor in 1914 and U.S. senator in 1916. Kendrick and Warren went on to serve together in the Senate until Warren’s death in 1929. By the end of January 1913, meanwhile, Pratt had ended his flirtation with the Democrats and returned to the Republican camp, where he remained.

At the close of the 1913 session Pratt reflected on the violence of January 20, but seemed to show no remorse for throwing Wood from the speaker’s chair.

“I regret that the Democrats so far forgot propriety and parliamentary usage as to try to take forcible possession of the speaker’s chair,” Pratt said, “but as they did so, I was obliged to use physical force to retain my position. After that one incident there was no question as to my right and authority—possibly my ability—to retain possession of the speaker’s chair and wield the gavel.”

Regardless of Pratt’s unrepentant attitude, reporter John C. Thompson remarked in a 1939 column that the session marked a low point in civility — one that left citizens across Wyoming “agog at the drama unfolding in Cheyenne.” To this day, the 1913 session stands as an example of partisanship and poor decorum for Wyoming lawmakers to avoid.

Wyoming House members come to blows over who should assume the speaker’s chair.