James Hayford of the Laramie Sentinel

James Hayford of the Laramie Sentinel

“He could sling more mud with a teaspoon than I could with a scoop shovel.” So said a colleague of Laramie’s early newspaper editor, Dr. James H. Hayford.

In a 1902 eulogy for the 75-year old Hayford, rival newspaper editor, E.A. Slack of the Cheyenne Daily Leader, wrote “We never knew a newspaper man … more a master of ridicule or sarcasm …[but] the longer we knew him the more we appreciated his fearless advocacy of what he believed to be right.”

The New York state native Hayford and his printing partner John E. Gates moved from Cheyenne to Laramie in May 1869 to take over a new paper, the Laramie Daily Sentinel. The paper lasted until 1895 when it finally folded as a weekly. 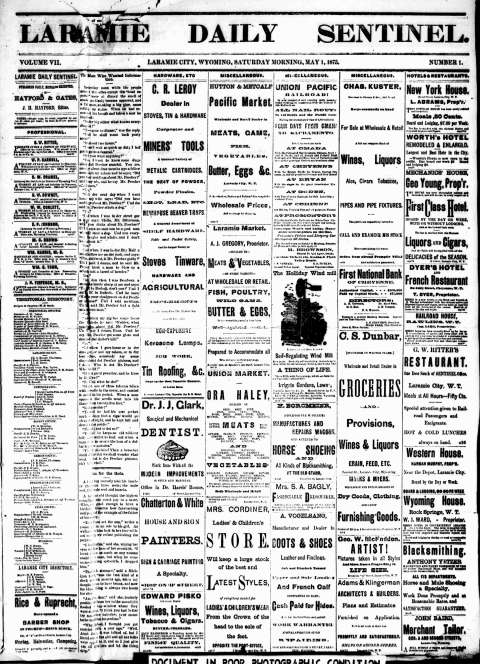 Born around 1827, Hayford obtained a medical degree from the University of Michigan and was also approved to practice law. He had two, perhaps three wives and from 18-25 children, according to various sources. Nine of his children are known to have survived him. Affectionately known as “Doc,” “Deacon,” or “Judge” Hayford, this moralistic Presbyterian was called “one of Laramie’s most colorful characters” by no less an authority than Wyoming historian Dr. T.A. Larson.

Hayford was at heart a reformer, determined to protect people from their vices. He had grown up in Abolitionist circles and was driven by a strong Protestant moralism. Another historian describes it as “pietism.” The anti-vice coalition Hayford later led in Wyoming politics became known in newspapers as the “goody-goody” faction.

But Hayford was no bleeding heart. On the Sentinel’s sixth anniversary, May 1, 1875, Hayford cheerfully told his readers he kept on his desk the “monstrous, grinning skull” of Ed “Big Ned” Beeston, one of four local toughs hanged by vigilantes in Laramie in October 1868.

His editorials were zingers. People probably subscribed to the paper mainly to read them, even when his former assistant, Bill Nye, set up the rival Laramie Boomerang after Hayford had made the Sentinel a weekly. Nye’s backers felt Laramie still needed a daily Republican paper. Nye, already nationally famous for his humorous columns, left Laramie after seven years; Hayford stayed on, fiercely pursuing his causes.

Larson also calls Hayford the “ablest editorial writer in Wyoming Territory,” and adds that Nye was “[n]ot as able a newspaperman as Hayford.”

In the Sentinel Hayford railed against liquor and prostitution—but it was gambling that drew his ire more than anything else. He saw it as a vice that prevented workingmen from paying their debts, harming them, their families and their cash-strapped creditors, undermining the whole of society.

For decades, he worked to eliminate gambling—in Laramie, in Albany County, territory-wide and eventually statewide. For a time his anti-gambling campaigns sparked a series of editorial duels with his rival E. A. Slack of the Cheyenne Leader, the man who in the end would eulogize him. 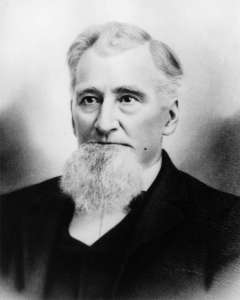 A staunch Republican, he fumed about most Democratic candidates and he even called General Grant “the most consummate ass that ever disgraced the presidential chair.”

Other targets included roller skating, local banker Edward Ivinson, 4th of July celebrations, “highfalutin” music and telephones. He also opposed the 1878 building of the East Side School at 8th and Garfield (now the Laramie Plains Civic Center) arguing that it was too far from Laramie’s center.

Ironically, Hayford and Ivinson were appointed in 1870 to oversee establishment of the Wyoming Territorial Prison in Laramie. Later they were both appointed to the first University of Wyoming Board of Trustees, Hayford, secretary; Ivinson, treasurer.

He fumed about hogs running wild and mucking up Laramie streets and ditches. We will never know the exact number of unpenned Laramie hogs; he claimed there were 2,000—sure to be an exaggeration. “Grumblers”—people who saw fit to complain about nearly everything—irked him. Some might have said he was a master complainer himself.

Another gross Hayford exaggeration loaded with sarcasm was the number of Albany County residents in 1870. The actual number was eventually released by the US Census Bureau as 9,118. But in September 1870, before the census had even been completed, Hayford reported that it was 22,436, with “about 20,000 of them Indians.” Hayford stated, “We should have published these statistics before, but there was an election pending and our political opponents would have insisted on having a voting precinct opened in Red Cloud’s camp, had they been informed of … so much democratic strength so near at hand.”

He also expended hyperbole on championing agriculture and how it would contribute to the future prosperity of Laramie and Albany County. But, he also supported women’s suffrage.

At various times he held appointed office as Wyoming Territory Auditor, Laramie Postmaster, District Judge and Laramie Justice of the Peace (Police Judge). He and wife Emma, who was 24 years younger, and their children lived near the corner of North A (later Fremont) and 2nd Streets.

Bound and microfilmed copies of the Sentinel are available at the Albany County Public Library. The paper contains advertising, jokes, reprinted features and local news, plus Hayford’s mostly unsigned editorials. 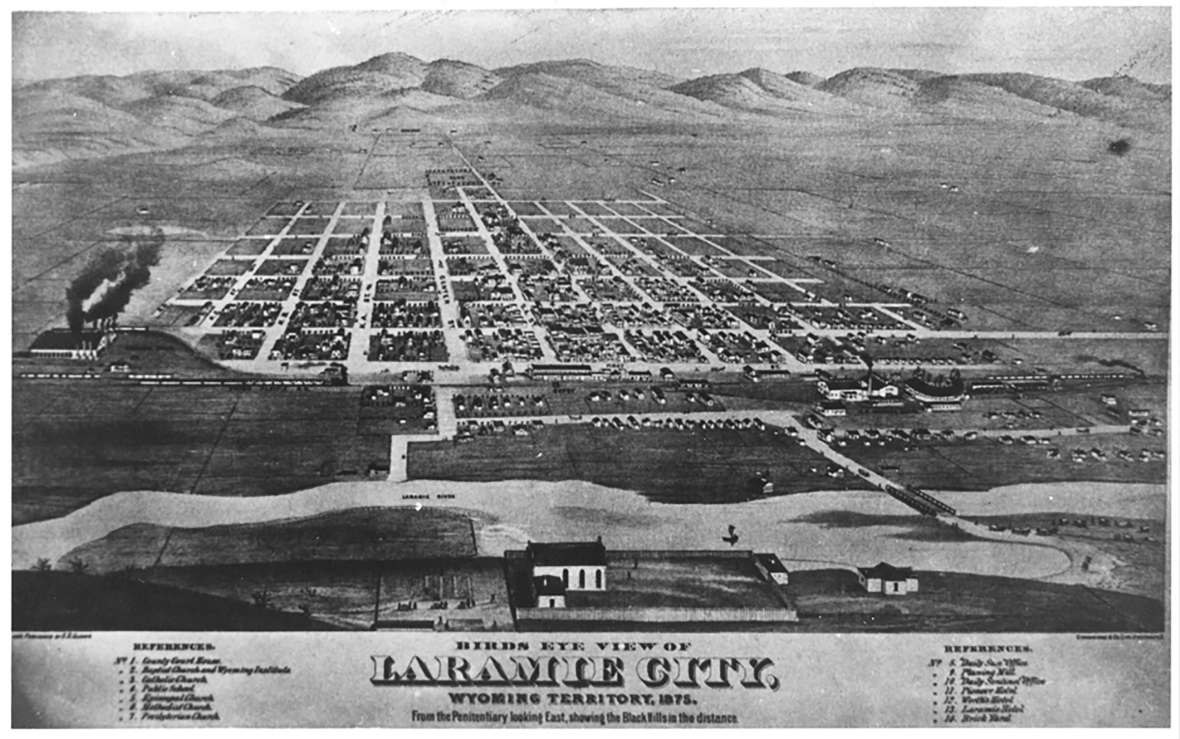 Editor’s note: An earlier version of this article first appeared online among the collections of the Albany County Historical Society. Special thanks to the author and to Kim Viner of the society for allowing its republication here.

Judy Knight retired in 2000 after a 30-year career teaching in the University of Wyoming Family and Consumer Sciences Department. Now she is part-time collection manager at the Laramie Plains Museum. She writes and edits stories for a local history column that has appeared bi-weekly in the Laramie Boomerang newspaper for the past eight years. They are archived on the website of the Albany County Historical Society. In summers, she enjoys organizing walking tours of Laramie’s Greenhill Cemetery with costumed characters bringing to life some of the stories buried there.

The Wyoming Territorial Prison is located at 975 Snowy Range Road in Laramie, Wyo. From Interstate 80, take Exit 311. The museum stands on 197 acres and is the only federally constructed territorial penitentiary with most of the original structure preserved, along with several restored historic buildings. The historic site where Butch Cassidy was incarcerated in 1894 hosts an annual Butch Cassidy Festival in June. For more information, call (307) 745-3733 or visit the website at http://www.wyomingterritorialprison.com/.

The local and regional history collections of the Albany County Public Library include bound and microfilmed copies of the Laramie Sentinel and other historic newspapers, rare books, video clips, diaries, letters, dynamic maps, photos, and more. The Laramie branch is located at 310 S. 8th St., Laramie, Wyo., 82070; (307) 721-2580; info@acplwy.org. See the wesbsite linked above for hours and more details.