At the corner of state Highway 130 and Bridge Street in Saratoga, Wyo. stands a world-famous landmark long frequented by locals. The Hotel Wolf, a two-and-one-half story red brick building with gabled roof, was built in 1893. It served as a stage stop from the time it opened, and its reputation soon spread. 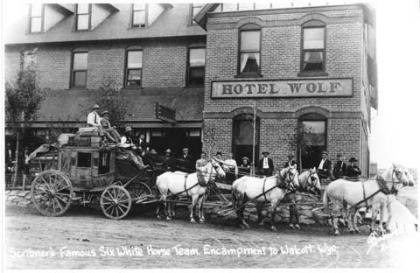 “No matter where you go,” says Doug Campbell, who, with wife Kathleen, owns the hotel as of 2011, “it seems like someone has been to the Wolf.”

Built with local bricks, the Victorian-style Hotel Wolf opened to the public on Jan. 10, 1894. Just a few days earlier, owner Frederick G. Wolf hosted a New Year’s Eve banquet and masquerade ball to celebrate. Guests in festive costumes enjoyed a sumptuous meal at the Gold Hill House across the street where they danced quadrilles until the wee hours of the morning. The new hotel, constructed for a total cost of about $6,000, was not quite large enough for such festivities.

Frederick Wolf was born in Flein,Württemberg, Germany. He served in the German army. In 1869, he married Christina Waldeman, and the couple came to the United States, settling in Rawlins, Wyoming Territory, in 1875. Wolf worked for the Union Pacific Railroad and owned a liquor business. Wolf’s father was engaged in wine gardening in Germany and passed this knowledge to his son. In the old country, Christina Wolf was a cook’s pastry apprentice.

The Wolfs soon combined these skills in their new Saratoga venture. Christina Wolf often presided over tea in the second floor ladies’ parlor. Passengers on the stages running south from Walcott Junction on the Union Pacific Railroad, or north from Encampment, Wyo., could rest and enjoy lunch in Saratoga after the morning’s ride.

In 1900, the Wolfs’ son, Frederick M. Wolf, repainted and replaced wallpaper on the bottom floor. Unfortunately, he drowned in July 1901. The Wolfs remodeled the hotel in 1902, the same year that electricity became available in Saratoga. A new south wing was built, and sleeping rooms were added. Baggage room, hallway, sample rooms where men enjoyed the finest liquors and cigars, and bath and toilet rooms on the first floor as well as three large bedrooms and ladies’ toilet rooms on the second floor were also included.

Frederick G. Wolf died in 1910. The following year, Christina Wolf leased the hotel to George “Baldy” Sisson, who purchased it in 1913 and renamed the structure the Hotel Sisson. Sisson, who served with Frederick M. Wolf in Col. Torrey’s Rough Riders during the Spanish-American War, was known as the “Old Original Trout Fishing King.” Sportsmen often visited his establishment. Sisson drowned in 1935 while fishing on the North Platte River.

In 1937, J. Earle Moore, another man who loved hunting and fishing, purchased the hotel. He died 10 years later, and his widow, Mary Moore, operated the business, known again as the Hotel Wolf, for another 30 years.

The Campbells purchased the hotel with Michael Self in 1977; that partnership ended in 1983 and the Campbells remain sole owners. They strive to maintain historic ambience while also including some modern conveniences.

In the early 1970s, the hotel was named to the National Register of Historic Places. The Campbells re-bricked the west exterior wall, refinished the Georgia pine in the saloon and installed posts similar to those used in 1893 on the porch. In 1993, the Campbells hosted a masquerade ball and dinner in honor of the hotel’s centennial.

In the early days, guests included investors in the world-famous Rudefeha copper mine in Encampment as well as governors of the state. Governors continue to visit the Hotel Wolf, which has also hosted celebrities, among them Christopher Reeve. Small corporate groups frequent the hotel, and most recently, research scientists studying the formation of snow crystals.

Hotel Wolf opened to the public in Saratoga, Wyo.

More about Saratoga at Wyoming Places

The Hotel Wolf is located at the corner of state Highway 130 and Bridge Streets in Saratoga, Wyo. As of 2011, ten guest rooms are available, five of them suites. There are no telephones and no air conditioners in the rooms, which are heated with steam radiators, but the rooms do have televisions.

From Interstate 80, take Exit 235 at Walcott and travel on state Highway 130 for about 20 miles to reach the town. For information or reservations, contact the Hotel Wolf at (307) 326-5525 or visit the hotel’s website.