The Mountain View Hotel was an integral part of the settlement of the Centennial Valley at the foot of the Medicine Bow Mountains, about 25 miles west of Laramie. With strong ties to mining, railroad, and early tourism endeavors, the building has remained in service in numerous income-producing capacities for more than a century.

Construction of the building was first proposed in 1906 and was to be built by Eastern capital at a cost of $8,000. The Boston-Wyoming Lumber Company ended up earning the contract, and construction began immediately. The plan called for 20 guest rooms and three baths with “the most improved system of plumbing.” However, the original bathrooms were placed outside in the livery stables for some reason. The hotel’s furniture was shipped from Chicago, and a man named R. Mettler was imported by the railroad to handle its daily operations.

The local newspaper, The Centennial Post, on Dec. 7, 1907, deemed the hostelry “the pride of Centennial,” stating that the hotel “is one of the finest and best equipped in the west.” The report further exhorted, “Every booster will now include the hotel in the list of all good things worthy of being boosted and never neglect to whoop it up for the Mountain View.”

Another news item in early May 1908 explained “Agent Tim Ulen of the Plains Line, is engaged in trapping grasshoppers … which means that the trout population in the near by streams will be greatly diminished in the very near future, and that the guests at the Mountain View hotel will be feasting on fish that are the finest in the land.”

Later that year, a full-page advertisement in the Post announced the “Mammoth Christmas Tree and Grand Santa Claus Ball” to be held at the Centennial Pavilion on Dec. 24, 1908, which included a special train trip on the Laramie, Hahn’s Peak and Pacific Railroad. Guests would leave Laramie at 7 p.m. for the ride to Centennial, where they would enjoy a “fine supper” at the Mountain View Hotel, exchange gifts with family and friends under the “largest and most magnificent Christmas tree in Wyoming,” and dance to the music provided by Neith’s Orchestra before returning to Laramie.

On April 20, 1912, the Post carried the news that Mr. and Mrs. Gustav Sundby had leased the Mountain View Hotel and were having it cleaned and remodeled with plans to “conduct a first class hotel and summer resort” that would be “cheerful, comfortable and home-like.” The couple apparently purchased the hotel a couple of years later, charging $1.00 to $1.50 for accommodations and meals, which included a breakfast of fresh fried trout, toast, pancakes and eggs and a dinner of steak and trout.

County records are sparse, and existing documents show that the Sundbys owned and operated the Mountain View Hotel and it was originally intended until the 1940s. Following the Sundbys, many individuals owned the hotel throughout the 20th century, and an element of its function would change slightly with each new owner. Dorothy Fisher purchased the building and part of it became Fisher’s Gift Shop and the town post office for a short period of time. In the late 1950s, the building was converted into apartments.

Owners Kathleen and Mike McShane acquired the building in early 2014 and now run it as a hotel once more. A small restaurant inside contributes to the experience for guests who visit downtown Centennial. The hotel is a survivor both physically and fiscally. It embodies the spirit of the early pioneers, miners, ranchers, railroaders, and entrepreneurs of Centennial. Much like the town, the hotel retains a sense of community spirit that welcomes any traveler.

The Mountain View Hotel was named to the National Register of Historic Places on June 17, 2007. 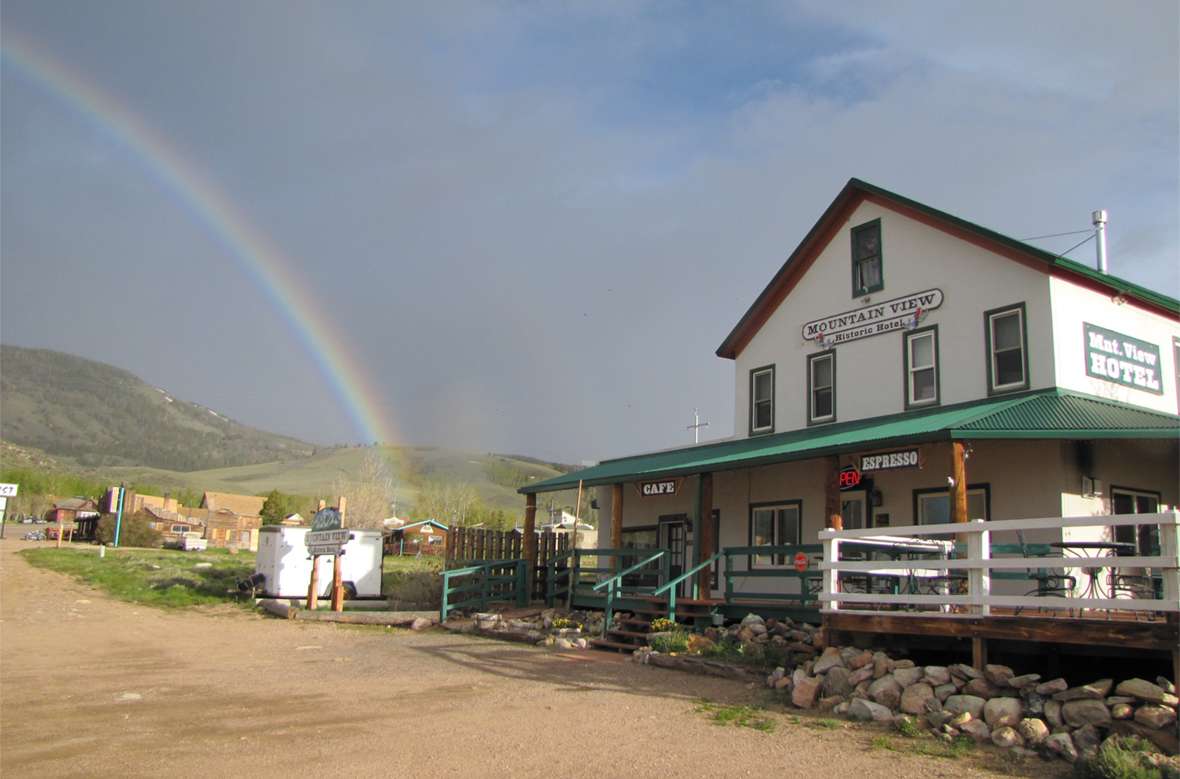 More about Centennial at Wyoming Places

The Mountain View Historic Hotel & Café is located at 2747 Scenic Highway 130 in Centennial, Wyo. For more information visit the hotel’s website at http://www.themountainviewhotel.com or call (307) 742-3588.