Saratoga, Wyoming: "Where the Trout Leap in Main Street"

Saratoga, Wyoming: "Where the Trout Leap in Main Street"

But the actions of an impatient early day Encampment, Wyo., freighter, “Gee-String” Jack Fulkerson, tired of waiting for someone to help him unload supplies at a Saratoga saloon, probably contributed to the slogan. Fulkerson tossed lighted sticks of dynamite off the bridge and into the North Platte River. This “blasted water all over and also fish all over Main Street,” Perue said.

For centuries, Indians prized the area around Saratoga, located in south central Wyoming in a scenic valley between the Sierra Madres and the Snowy Range, for the abundant wildlife and therapeutic hot springs. Tribes considered the mineral springs neutral territory. According to Saratoga author and historian Gay Day Alcorn, mountain man Jim Baker and other trappers were the first whites to come to the area in 1838 on Baker’s first trip west.

The construction of the Union Pacific Railroad along an east-west route about 20 miles north of present-day Saratoga and the establishment of Fort Steele on the UP line brought more whites and settlers to the region. Soldiers and officers at the fort enjoyed hunting in the region and soaking in the springs. Ranchers came as well. Richard Savage arrived in Carbon County in 1868 and is credited with being the first man to import Oxford (black-faced) sheep from Canada. The fort trader’s store, J. W. Hugus and Company, was supplying ranchers and others in 1870.

In 1872, Civil War veteran and Andersonville prison survivor Taylor Pennock came to Fort Steele. He hunted game for the Union Pacific tie camp at Rock Creek, freighted supplies to Coe and Carter’s tie camp north of Brush Creek and did some trapping.

According to Alcorn, Pennock recalled that during the smallpox outbreak of 1874, the Indians raised a tall pole with a sling that could swing people over the water. This allowed them to dunk the ill first in the hot water to boil out the infection and then in the cold water of the river for a cleansing rinse. Many died.

Others found healthier benefits to the hot springs. William Cadwell, a Civil War veteran from Elmira, N.Y., and a former hunter for the Overland Stage Company, built a cottonwood log structure and a bathhouse near the springs to accommodate soldiers from Fort Steele and others who came to enjoy the mineral waters. A post office, named Warm Springs, was established there Oct. 4, 1878.

By the 1880s, British barons and other dignitaries visited the area to enjoy hunting expeditions, and some bought ranches. Henry Seton-Karr became the largest stockholder in the British-owned Sand Creek Land and Cattle Company, Limited, in 1883. He formed a cattle partnership with Frank Earnest of Warm Springs, purchasing 2,000 head that spring. Their property beside the North Platte River was said to have included 150,000 acres of informal grazing rights. Seton-Karr later served as a Member of Parliament. Earnest’s brand, a pick with a bar added, gave their ranch its name: the Pick Ranch. Although there have been other owners, the ranch is still known by that name.

In 1883, Hugus sold his interest in his store to his brother Wilbur, who partnered with Fenimore Chatterton, J. W.’s bookkeeper. Chatterton operated the Fort Steele store, and Wilbur Hugus managed the Hugus and Chatterton store at Warm Springs.

The next year, at Chatterton’s suggestion, the town was renamed Saratoga. He had visited Saratoga Springs, New York, as a youngster and remembered the wonderful waters there. The name is said to come from the Iroquois word Sarachtoue, which means “place of miraculous water in the rock.”

Also in 1884, construction was completed on the Saratoga Springs Hotel, which had a large dining room that seated 60 people as well as a barbershop, drug store, billiard room and ladies’ reception room. A fire destroyed the building in 1902, and the state of Wyoming created the State Bath House on the site, charging 50 cents per bath.

Chatterton had platted the town in 1885, beginning on the east side of the river. He helped plat the west side—where downtown Saratoga is now--in 1888. That same year, Chatterton was elected treasurer and probate judge for Carbon County. He resigned to seek election as a Republican to the state senate, and he served during the first and second sessions of the Legislature in 1890-1891 and in 1893.

In 1893, German-born Frederick Wolf built his three-story structure, constructed with bricks made in Saratoga, on the west side of the North Platte River. The purpose of the Hotel Wolf was to serve as a stage stop, although from the beginning the accommodations were considered quite elegant.

In 1898, Chatterton won election as Wyoming’s Secretary of State. When Gov. DeForest Richards died in office in 1903, Chatterton became governor. During Chatterton’s term, stock detective Tom Horn was convicted of the murder of Willie Nickell. Horn’s lawyers sought a pardon from Chatterton, but after an extensive review of the matter, he decided the court had done its job properly. Horn was hanged.

In July 1907, the first locomotive rolled into Saratoga on the tracks of the new Saratoga and Encampment Railroad. Residents were thrilled and threw a party in late August hailed by the Saratoga Sun as “probably the biggest success of its kind ever pulled off in Wyoming.” The celebration included a huge fish fry. An estimated 3,500 trout were served to those attending the event.

In 1911, the Saratoga National Fish Hatchery was established north of the town to produce a variety of eggs, including brook, rainbow, brown, golden and cutthroat trout, and continues to operate today.

In 1928, the U.S. Forest Service in conjunction with the National Geographic Board renamed the mountain northeast of Saratoga, known as Wood Mountain or Cedar Mountain, Pennock Mountain in honor of Taylor Pennock.

Timber continued to be an important economic mainstay. In 1934, R.R. Crow and Company started a sawmill near the location of the present-day mill at 507 Bridge Ave. and operated it for many years.

Many locals served in the military throughout the years. During World War II, Oakley Anderson, an electrician first class in the U.S. Navy, saw action in 5 major battles including D-Day in Normandy, France, on June 6, 1944, and survived them all. He served aboard the LST1, the first Landing Ship, Tank commissioned during the war, which hauled wounded from France to England and returned with supplies. Lt. Jack E. Shively died when he was shot down over Chinon, France, on June 13, 1944. Shively Field, the Saratoga airport, is named for him.

In the 1980s, many annual events that help promote tourism to the area began. The Don E. Erickson Memorial Chariot Races, sponsored by the Saratoga Lions Club, started in 1980. Two-horse teams pulling chariots race on a quarter-mile track at Buck Springs arena. In 1981, local middle school social studies teacher Rod Laird combined his passion for history with his classroom lessons, instructing students about the differences between primitive and modern technologies.

Laird’s interest in the atlatl, an ancient spear thrower, led to “The Primitive Technology Fair and Kids’ World Open Atlatl Contest,” held in spring 1981. That summer, adults participated in a similar event, which eventually became so popular that it was moved to Casper, Wyo. In 1983, the first annual Ice Fishing Derby was held at Saratoga Lake.

In 1994, a substantial renovation of the Saratoga Inn, built in 1949 and located where Hugus and Chatterton’s store once stood, included remodeling of the State Bath House and the swimming pool as well as a the addition of a microbrewery.

In September 2001, Oakley Anderson was one of 150 Wyoming veterans, including former Gov. Stan Hathaway, who received certificates of thanks from the French government for their contributions during World War II.

In 2003, Louisiana Pacific, which had purchased the sawmill from Crow’s successor, the Edward Hines Lumber Company, in 1983, closed its Saratoga operation, creating a huge setback for the local economy. The railroad line, which had been owned by the Union Pacific and then Dave Durbano and had been used for many years to haul lumber products from Saratoga to Walcott, Wyo., was abandoned. The last locomotive left Saratoga in 2007.

The $5 million, 27,150-square foot Platte Valley Community Center opened in 2007. The structure has four meeting rooms, a 400-seat proscenium theater, kitchen and banquet hall with space for 300 people. An additional remodeled 18,000-square foot portion of the former middle school gymnasium next to the center serves as a fitness center with a weight room and a cycling room. Construction funds were raised through Carbon County capital facilities tax revenues, private donations and in-kind matches and a $1.5 million Wyoming state grant. Concerts by local groups and celebrity performers, weddings, trade shows and other activities are held at the center.

The North Platte River flooded in 2010 and 2011, rising two feet above flood stage to 10.5 feet in 2011 and breaking a record set in 1917. The Wyoming National Guard and local residents placed 100,000 sandbags along the river and on streets in residential areas to help protect homes and businesses in the town of 1,690.

The World Atlatl Association recognized Rod Laird’s efforts in 2011 and named Saratoga “the birthplace of the modern sport of friendly atlatl competition.” That same year, Outdoor Life listed Saratoga as the fifth-best town for outdoor sports.

In 2013, Saratoga Forest Management purchased the sawmill and began operations. The owners of the Hotel Wolf, which is listed on the National Register of Historic Places, celebrated the 120th anniversary of the “Grand Old Gal of the Valley” with a special event in January 2014.

Although visitors today may not see 400-500 trout feeding beneath the bridge as the Saratoga Sun noted in its 1907 article about the huge fish fry, fishermen still catch trout in the North Platte River and tourists and locals still enjoy the hunting opportunities, the mountain scenery and the mineral springs in the small Wyoming town “where the trout leap in Main Street.” 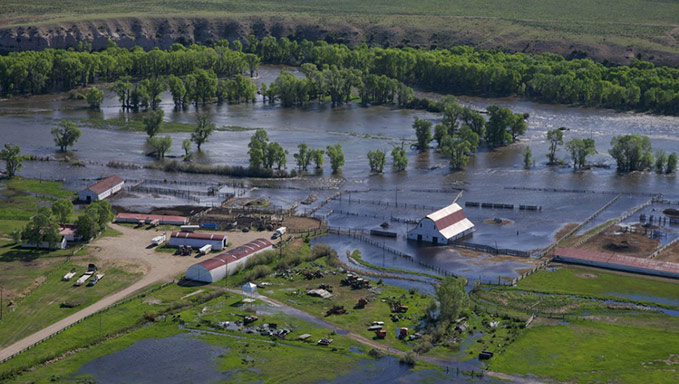 More about Saratoga at Wyoming Places