Clarence Don Clark was among the elite group of Wyoming politicians who rose to power in the 1880s and dominated territorial and state governmental affairs for decades. In background and temperament, Clark seemed an unlikely colleague to the flamboyant F. E. Warren and the contentious Joseph Carey. He was an attorney rather than a rancher or businessman, and his personal style was dignified and self-effacing. But like the other members of the “Warren machine,” he diligently served Wyoming as a staunch Republican. Between 1890 and 1917, he served briefly as a congressman, and then a much longer stint in the U.S. Senate. 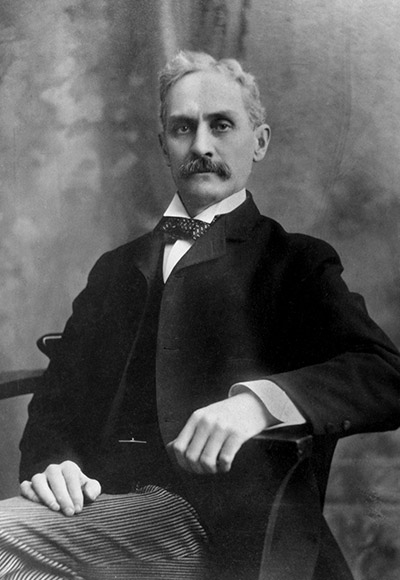 Clark was born April 16, 1851, in Sandy Creek, N.Y., to Oratio Dyer Clark and Laura King Clark. In 1855, the family moved to Belvidere, Ill., where Oratio worked as a blacksmith. Clarence taught school in Belvidere briefly, then moved to Manchester, Iowa, and then to Omaha, Neb., in 1870. There he worked as a bookkeeper for the Wyoming Coal Mining Company, which had as its main customer the Union Pacific Railroad. The following year Clark entered the law school at the University of Iowa. In 1874, shortly after being admitted to the bar in Iowa, Clark married Alice Downs Crinklaw.

After several years of teaching school and trying to establish a law practice, Clark moved in 1881 with Alice and their son, George, to Evanston, Wyo., where he worked in the legal department of the Union Pacific Railroad. It is likely that their move was prompted by Clark's older brother, Dyer O. Clark, who was then working for the Union Pacific Coal Company in southwestern Wyoming. After the move, the Clarks had three more children: Laura, Margaret and Frances. George died in 1890.

In 1882, Clark was elected county prosecutor. He held the office for four years. Early on, he was complimented for his work by the editor of the Uinta Chieftain who wrote, “Much credit is due the prosecuting attorney, for the clear, gentlemanly and concise manner in which his business has been conducted; all the indictments have stood, and the business of the court has run very smoothly. This is all the more commendable, as Mr. C. D. Clark is comparatively a stranger in this community, and unfamiliar with many of the cases and characters with which he had to deal.”

Clark's stature in the community, coupled with his good standing with local Republican political interests, earned him appointment as one of six delegates from Uinta County to the Wyoming Constitutional Convention in Cheyenne in 1889. At the convention, his knowledge of law proved invaluable to the delegates. He supported the inclusion of woman suffrage in the constitution.

In 1890, President Benjamin Harrison, on the recommendation of Judge Joseph Carey, appointed Clark an associate justice of the Wyoming Territorial Supreme Court. But Clark turned down the appointment. Though he did not offer an explanation, it seems likely that he expected to be elected as the state's first congressional representative later that year when Wyoming was likely to become a state. At the statehood celebration in Cheyenne on July 24, 1890, Clark's statewide reputation earned him the title of Orator for the Day.

The House of Representatives

By popular vote, Clark won election as the state's first congressman—Wyoming’s first representative—and was seated Dec. 1, 1890, as a member of the 51st Congress. His maiden speech, given to the 52nd Congress a year and a half after he was seated, was an impassioned plea to increase the appropriation for the surveying of public lands, which would benefit land seekers in Wyoming and contribute to the growth of the state.

By the time Clark's first term was nearly expired, new political winds were blowing across the country with the rise of the Populist Party. Although Clark was endorsed by the state Republicans for re-election, he was defeated in the general election by Henry Coffeen of Sheridan, the Populist candidate. The Populists had formed a coalition with Democrats to defeat the Republicans. Clark returned to his law practice in Evanston.

In 1895, the state legislature elected Clark to the U.S. Senate to fill two years of a term that had been left vacant in 1893, when the legislators, deeply divided by rancorous politics in the wake of the so-called Johnson County War, had been unable to elect a senator at all. Immediately after the 1895 election, Clark traveled to Washington, D.C., with Wyoming's senior senator, Francis E. Warren, for induction into the Senate.

Clark's good looks and distinguished demeanor prompted a Washington reporter to dub him the “Apollo of Wyoming”. The Cheyenne Daily Leader effusively described Clark as “suave, genial, approachable, a man of fine character and culture.” Clark was elected to the to the Senate four times by the legislature and served from 1895 to 1917. Together with Warren and U.S. Rep. Frank Mondell, Clark made the third member of Wyoming's all-Republican congressional triumvirate.

Of the three, Clark preferred to work behind the scenes, in committee rather than on the floor, always keeping Wyoming's interests at the top of his legislative agenda. During his second term, he joined a congressional movement to abolish the newly established forest reserves. He opposed any moves by the federal government to withdraw public lands from availability for homesteading or other kinds of transfer into private hands. For this he was praised by the Cheyenne Daily Leader: “Senator Clarence D. Clark deserves the applause of not only every citizen of Wyoming, but every person interested in the welfare of the West for his courageous defense of the land laws in the Senate.”

And Clark consistently supported high tariffs, especially on coal, to protect one of Wyoming's main industries. Perhaps his most significant work was on the Senate Judiciary Committee, which he chaired from 1905 until 1916. With his legal background, he helped to streamline the unwieldy federal judicial system.

By 1910, as Clark was eyeing his fourth term, the Progressive Party was making inroads into even staunchly Republican Wyoming as a coalition of Republicans and Democrats launched a campaign to bring down the “Warren machine.” In that year, Clark narrowly won re-election to the Senate over John B. Kendrick of Sheridan. During that term, he became the sixth-ranking member of the U.S. Senate in longevity of service. In addition to chairing the Judiciary Committee, Clark also served on the Appropriations Committee. 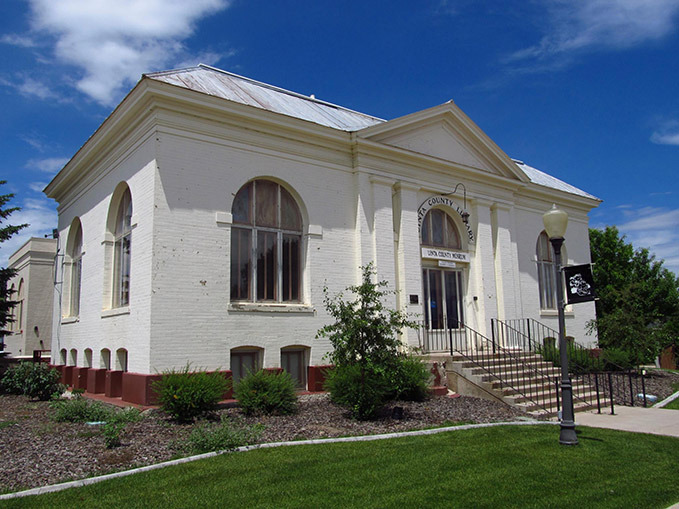 Clark used his position and power in the Senate for the benefit of Wyoming and its citizens. He regularly found positions in the civil service for Wyomingites and reportedly introduced more pension bills than any other senator during his tenure.

He was a strong advocate for Uinta County as well. In February 1902, Clark wrote to the steel tycoon-turned-philanthropist Andrew Carnegie on behalf of Uinta County: “The citizens of Western Wyoming desire to interest you if possible in the establishment of a public library in this portion of our state.” The following year, Carnegie gave the county $10,000 to construct a library in Evanston; it was completed in 1906. Clark also lobbied successfully for the establishment of a federal courthouse and post office building in Evanston, dedicated in 1908.

Because Clark had worked for the Union Pacific Railroad when he first came to Wyoming, and because his brother was a vice president of the UP, Clark was sometimes accused of being a tool of the railroad. He was, in fact, cautious in dealing with legislation that might adversely impact the UP, but he was equally discreet in avoiding any appearance of favoritism toward the company.

Throughout his tenure as a senator, Clark was sought as a speaker by organizations all across the state as much for his distinguished appearance as for his oratorical skills. He looked every inch a senator. In spite of his personal popularity, however, his career foundered in 1916 when election of senators was moved from state legislatures to a vote of the people. 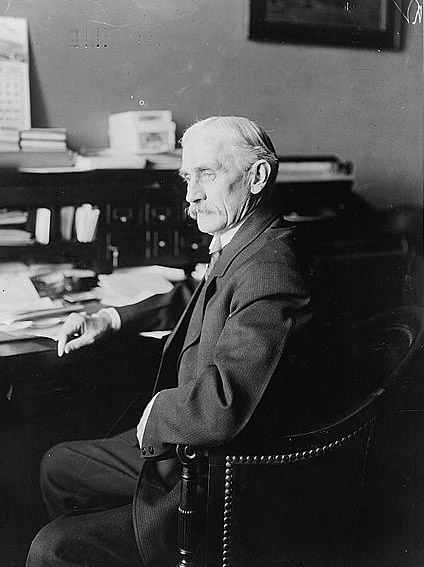 Because he had always campaigned only among legislators, he was unprepared to campaign among the general electorate. Further, it appears he was not in tune with the progressive mood of the country, including Wyoming, at the time. The national Republican Party rallied around Clark, arguing that Wyoming would lose a strong presence in the Senate given Clark's seniority there and his position on two important committees. Despite this effort, Clark lost his seat to John Kendrick by a large majority. Perhaps most embarrassing to Clark, Kendrick out-polled him in Clark's own Uinta County. With Clark's defeat, the long era of the Clark-Warren-Mondell coalition came to a close.

When Clark's term ended in March 1917, the Wyoming Press of Evanston published a front-page article filled with lavish praise. Though the newspaper implied that Clark would return to Evanston, he remained in Washington to practice law. In 1919, President Woodrow Wilson appointed Clark to the International Joint Commission, formed seven years earlier by the United States and Canada, to manage and protect the lakes, rivers and streams that form the boundary waters between the two nations. In 1923, Clark became chairman of the U.S. section of the commission.

During the early 1920s, Clark and his wife, Alice, divided their time between Washington, D.C., and Los Angeles, where their daughter Laura lived. Alice died in 1925. Four years later, Secretary of Commerce Herbert Hoover requested Clark's resignation from the commission, citing Clark's health as a concern. Clark then returned to Evanston where his daughter Margaret Holland lived. Clark died there on Nov. 18, 1930. He was interred in the Masonic Cemetery in Evanston.

As one of Wyoming's most distinguished politicians, Clarence Don Clark remains one of Evanston's cherished citizens. Clark Elementary School in Evanston, built in 1914, was named in his honor. And he has a presence in the form of a handsome oil portrait that hangs proudly in the former Carnegie Library, now the Uinta County Museum. 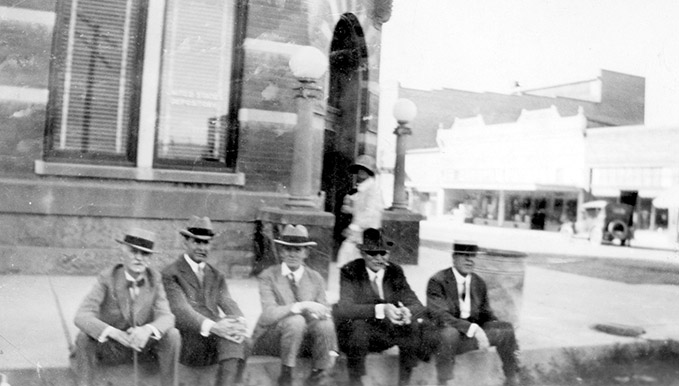 Barbara Allen Bogart, Ph. D., has worked as a historian and oral historian in Wyoming since 1991. She served on the staff of the Wyoming State Museum, has worked as a consultant for several Wyoming museums and historical societies, and was director of the Uinta County Museum from 2003 to 2009. She is the author of Images of America: Evanston (Charleston, S.C.: Arcadia Publishing Co., 2009) as well as In Place: Stories of Landscape and Identity from the American West (Glendo, Wyo: High Plains Press, 1995).

More about Evanston at Wyoming Places

To learn more about early Evanston and Uinta County, and see an oil portrait of longtime U.S. Sen. Clarence D. Clark of Evanston, visit the Uinta County Museum, located in the 1903 Carnegie Library building at 1020 Front St. in Evanston. The building housed the Uinta County public library until 1986 and was expanded in 2008. The museum is free, and open from 9 a.m. to 5 p.m. Monday through Friday, and from 10 a.m. to 4 p.m. Saturdays. For more information, call (307) 789-8248.