Wyoming's fossils have been important to science since the 1870s and continue to be useful today. Remains of Triceratops, Diplodocus, Tyrannosaurus and others have helped answer—and raise—many questions about the ancient history of the planet and have captured popular imagination with their size or fierce appearance. The scientific value of these fossils and the public interest in them has brought many different collectors to the state who excavate fossils for shipment to museums all over the country. However, only a few major finds from Wyoming have remained in the state. 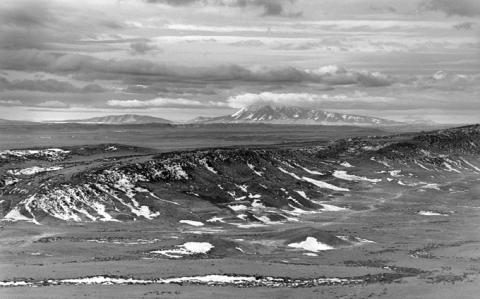 In 1877, employees of the Union Pacific Railroad found large bones weathering out of the hills at Como Bluff near Medicine Bow, Wyo., and wrote to paleontologist Othniel C. Marsh of Yale College, in Connecticut. Within a year, diggers hired by Marsh and teams working for paleontologist Edward D. Cope, of Philadelphia were excavating tons of fossil bones for shipment east. Marsh and Cope were bitter professional rivals, and the same spirit infected their employees.

Diggers smashed bones in the quarries of the other teams and even in their own to avoid thefts. No one will ever know what valuable specimens were lost to this rivalry, but the ones which were gained include Dryolestes, the first Jurassic mammal discovered in North America; large pieces of Apatosaurus, then known as Brontosaurus; several Baptanodons—marine reptiles; and many others. Specimens collected for Marsh went to the Peabody Museum at Yale; those gathered for Cope went mostly to the Academy of Natural Sciences in Philadelphia.

Museums closer to the fossil locations also acquired specimens. In the 1890s, the University of Wyoming accumulated a large collection of Jurassic fossils (unfortunately, most of this collection was lost to flooding in the 1920s), and in 1895 Prof. Samuel Williston of the University of Kansas traveled to Lusk, Wyo., to collect for the university’s museum the first Triceratops skull ever to go on display.

The best and most scientifically important fossils, however, left the region in large part because the expert collectors, the most eminent scientists and the best museum facilities—where specimens could be safely preserved for future examination by scientists—were on the East Coast.

In 1898, the American Museum of Natural History discovered the Bone Cabin Quarry north of Medicine Bow, where fossil bones were so plentiful that a local resident built his cabin’s foundation entirely with bone chunks. (This structure no longer exists, and is a different structure from the so-called fossil cabin, a roadside attraction on U.S. 30 just south of Como Bluff built entirely of fossil bones in the 1930s.)

In the five years following 1898, the Bone Cabin Quarry was worked nearly to exhaustion, yielding parts of many large Jurassic dinosaurs in the process. Additionally, AMNH crews explored other areas of the state, discovering a duck-billed dinosaur of the hadrosaur family near Lusk that retained extensive skin impressions surrounding the body.

On July 2, 1899, a Diplodocus was found at Sheep Creek about 25 miles north of Como Bluff. This fossil was one of the first large specimens collected for the budding Carnegie Museum of Pittsburgh, Pa. When Andrew Carnegie paid to have the skeleton replicated and copies sent to museums in Britain, Europe and Argentina, he made it perhaps the most famous dinosaur ever to come from Wyoming. Millions of people first heard of dinosaurs and paleontology by seeing a mount of Diplodocus carnegii.

A second dinosaur from the Sheep Creek quarry was an Apatosaurus excavated in 1901. It also was dug for the Carnegie Museum, but never mounted. In 1955, the University of Wyoming in Laramie, Wyo. acquired this specimen for its Geological museum, where it is still on display.

In 1975, numerous tracks of pterosaurs—flying reptiles—were discovered near Alcova Lake. At that time, only one set of tracks was known; with the evidence provided by the Alcova fossils, some long‑standing assumptions about the behavior and environment of pterosaurs were revised.

In 1991, a private collector found an Allosaurus near Shell, Wyo., on the west flank of the Bighorn Mountains. The fossil was eventually determined to lie on public land and was collected by the Bureau of Land Management, the Museum of the Rockies in Bozeman, Mont., and the University of Wyoming. The Museum of the Rockies retained the bones and made casts, now on display in Bozeman and Laramie. This discovery of "Big Al" and associated fossils helped prompt an effort to revise fossil law and limit commercial collecting on public land. 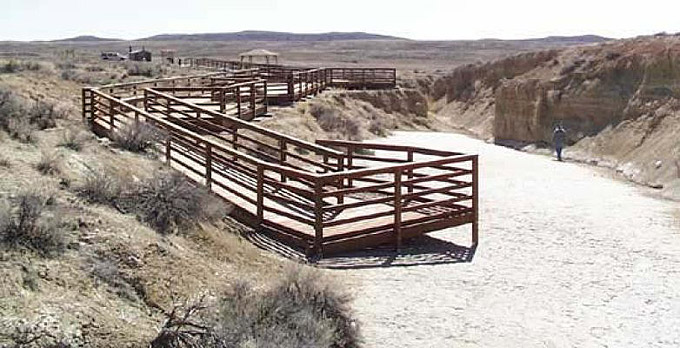 In 1997, the Red Gulch Dinosaur Tracksite, the largest in Wyoming, was discovered in the Sundance Formation southwest of Shell, the tracks apparently representing a large herd of dinosaurs moving along a beach. Scientists had previously thought that the entire Sundance Formation was marine—that is, that its sediments were laid down under water—but these tracks showed that a large dry area must have been present to support such numbers of land dwellers.

In 2006, "Apollo," one of the most complete diplodocid skeletons, retaining 83 percent of the original bones, was dug at Tensleep, Wyo., by a private firm. This specimen was discovered with others in a world‑class assemblage of numerous nearly complete skeletons, and the new material is already stirring debates over the habits and relationships of sauropods, the long-tailed, long-necked, elephant-legged plant eaters, including Diplodocus, Apatosaurus and Superasaurus.

In recent years, museums in Wyoming, such as the private Wyoming Dinosaur Center of Thermopolis and the Tate Museum of Casper College, have been expanding and acquiring more, more complete and more intact specimens. "Jimbo," the Supersaurus vivianae at the Dinosaur Center, was discovered near Douglas in 1995 and, as the second specimen of one of the biggest sauropod species known, has been exhibited internationally. Current research on this fossil may help scientists reclassify the sauropod family.

"Dee," the largest mounted Columbian mammoth in North America, was found in 2006 on a ranch north of Casper, Wyo. and is now on display at the Tate Museum. The Tate has also recently collected a Tyrannosaurus rex north of Lusk, Wyo.; this specimen is the first found in Wyoming to stay in the state.

Wyoming's fossils have contributed to cultural and scientific development across much of the world and will probably continue to do so. Although the supply of world-class specimens is limited, it is not yet exhausted. Many in Wyoming hope that as its scientific institutions mature, the state will be able and qualified to retain some of these finds.

Warning: While fossil-bearing rocks are present around Wyoming, it is illegal to collect on private land without permission of the landowner or to collect fossils of vertebrates on public land without a permit. It is the collector's responsibility to be aware of the land boundaries and the regulations. Consult the nearest geological museum for advice on sites and collecting.

This trail in Alvoa, Wyo., is located on Bureau of Reclamation land and leads through the Jurassic Sundance and Morrison formations. Fossils are present but must be left "in situ" for other trail users to view. To get there, take Highway 220 southwest from Casper to Alcova Lake, turn left at the town of Alcova and follow the road around the east side of lake. After passing the Black Beach turnoff, turn right at the dinosaur sign and stop in the parking area. The trail, with easily followed interpretive signs, is always open unless weather has forced road closures. Admission is free.

The Red Gulch Dinosaur Tracksite is on Bureau of Land Management land southwest of Shell, Wyo., and includes extensive interpretive signs for a self-guided tour of the site, where more than 1,000 tracks of two-legged, three-toed meat-eating dinosaurs of the middle Jurassic period are visible in hard limestone. Admission is free. Travel about eight miles east of Greybull, Wyo. or four miles west of Shell on US Highway 14 to the Red Gulch/Alkali National Back Country Byway turnoff. Head south on the byway, a dirt road, about five miles to the tracksite. For more information see the website linked above or call the BLM office in Worland, Wyo., 307-347-5100.

The displays at Tate Geological and Mineralogical Museum in Casper, Wyo., include "Dee," the largest mounted Columbian mammoth in North America, and a good selection of other Wyoming fossils including marine forms and mammals. Admission is free. For more information on hours, etc. visit the website linked above.

Many high quality specimens from both in and out of state are displayed at the Wyoming Dinosaur Center in Thermopolis, Wyo., including an Archaeopteryx from Germany and the Supersaurus "Jimbo.” The center maintains a working quarry open to the public during "Dig for a Day" events. Admission is $10 for adults and $5.50 for children ages 4 -13. For more information on hours, etc., visit the website linked above.

Displays at the Western Wyoming Community College in Rock Springs, Wyo., are in various locations around the campus and show a Camptosaurus, a plesiosaur, a Stegosaurus, a Triceratops, and a Tyrannosaurus. All these species once inhabited Wyoming, and some of the specimens were collected in state. Admission is free and the college is convenient to travelers on I-80. For more information on hours, etc., visit the website linked above.

The college continues to run archeological field schools each summer, including one on the site of Evanston’s former Chinatown. Visit http://www.wwcc.cc.wy.us/wyo_hist/archfieldschools.htm or contact Dudley Gardner directly at dgardner@wwcc.wy.edu.