Como Bluff Historic Paleontological Site is located along U. S. Highway 30/287 in Carbon and Albany counties, Wyo., on private property. Trespassing is not allowed. 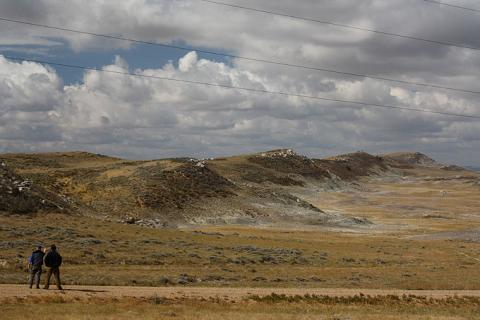 Historically this site was mined for fossils; today, it is seldom visited by paleontologists. Como Bluff remains important for its education and science opportunities, however. Dinosaur discoveries at Como Bluff, beginning in the late 1870s, played a very important role in the “development of many of the great museums of the New World,” according to author Ned Frost who wrote the document nominating this site to the National Register of Historic Places. Hundreds of bones were unearthed and shipped from this site to different locations around the world.

During the Cretaceous and Jurassic time periods (65-180 million years ago) this area looked, and felt, quite different than it does today. The temperature was much warmer and the climate wetter; the land was flatter. These conditions would have favored many animals, including dinosaurs, as represented by the fossil record. Today, the land is dry and windblown.

Here, paleontologists found many fossil specimens in near‑perfect condition. During the late 1870s and 1880s, paleontology teams from Yale University and the Philadelphia Academy of Natural Sciences discovered a multitude of dinosaur and other prehistoric animal remains here. Some dinosaurs found at this site were: Allosaurus, Stegosaurus, Camarasaurus, Diplodocus and Apatosaurus, known then as Brontosaurus Dinosaurs from Como Bluff are on display at the Peabody Museum at Yale, the Smithsonian Institution’s National Museum of Natural History in Washington, D.C., and the American Museum of Natural History in New York City.

More history about ­­­the dinosaurs found at Como Bluff, the people involved and the past activities that occurred at this site may be found in the nomination to the National Register of Historic Places. Nominations can be obtained online by searching the following website: http://wyoshpo.state.wy.us/NationalRegister/Search.aspx, or by contacting the Wyoming State Historic Preservation Office at (307) 777-7697.

Brinkman, Paul. The Second Jurassic Dinosaur Rush: Museums and Paleontology in America at the Turn of the Twentieth Century. Chicago: University of Chicago Press, 2010.

The photo of the north face of Como Bluff is by Tom Rea.

The Fossil Cabin at Como Bluff stands on the north side of U.S. Highway 30/287 about five miles east of Medicine Bow, Carbon County, Wyo. Entry into the cabin and the house nearby is prohibited, but travelers may stop and examine the site and the accompanying historical marker. For the text of the historical marker, search for “Fossil Cabin” here.

For a good view of the bluff’s north side, which proved so rich in dinosaur bones to early paleontologists, take U.S. Highway 487 about a mile north from Medicine Bow and turn northeast onto the dirt Marshall Road, Carbon County Road 262. After crossing the Carbon/Albany County line, the Marshall becomes Albany County Road 610. At a three-way intersection, one branch of 610 heads north and one south; follow the southern route back around the east end of Como Bluff to U.S. 30/287. Distance from the turnoff on U.S. 487 to U.S. 30/287 is about 19 miles.