Fossil Butte National Monument, near Kemmerer, Wyo., was created Oct. 23, 1972, to preserve "outstanding paleontological sites and related geological phenomena," in the words of the congressional act. 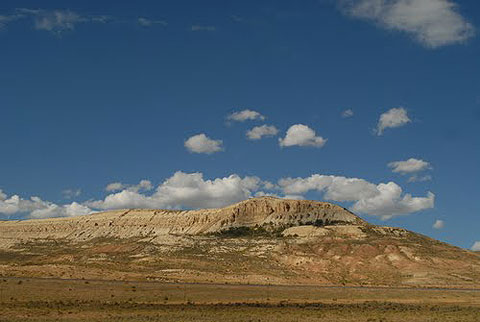 The legislation protects 8,200 acres of a 50-million-year-old lakebed, Fossil Lake. During the Eocene Epoch when the lake was formed, southwestern Wyoming and surrounding areas of Utah and Colorado held large lakes in which the sedimentary Green River Formation was deposited, thus preserving some of the best examples of intact fossils ever found.

The climate at the time was subtropical, similar to that of the southeastern United States today. The formation of the Rocky Mountains was warping the landscape into highlands and basins, and an annual rainfall of more than 30 inches was enough to create Fossil Lake and other lakes like it.

Many types of life thrived within the upper waters of the lake. Plankton supported large shoals of herring. Big predatory fish, including gars and dogfish, hunted smaller fish species while catfish and freshwater rays fed on crustaceans. The lower waters, however, contained a poisonous concentration of hydrogen sulfide that prevented scavenging fish from occupying the lake floor.

From time to time, dozens of fish died simultaneously. These mass mortalities may have been due to contamination of the upper water by hydrogen sulfide released by earthquakes or by seasonal turnover of the lake waters; extremes of temperature or salinity; or stagnation caused by drought. Lying on the lake bottom, the fish were undisturbed as lime-rich mud slowly buried them. Green River Formation fish fossils, flattened by the weight of sediment into two-dimensional imprints, frequently show every tooth, rib and fin. Equally well preserved, but less common, are freshwater rays, water and shore birds, frogs, bats, turtles, crocodiles and plants.

Although early explorers of the West such as John C. Frémont and geologist Ferdinand V. Hayden were aware of the fossil beds, significant study of the Green River Formation fossils did not begin until the late 1860s when the Union Pacific Railroad made a cut through the formation near the town of Green River, Wyo. 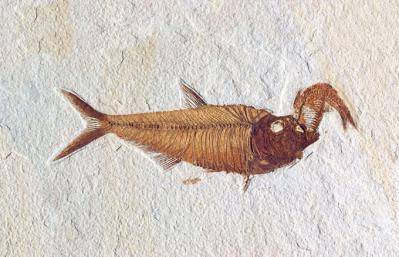 From fossils passed on to him by railroad employees, paleontologist Edward Drinker Cope described several new species. In 1897, an amateur collector named Robert Craig began quarrying fossils: he was soon joined by other commercial and private collectors. Specimens from the Green River Formation began to be displayed in museums all over the world.

Over the next decades, public interest in these fossils grew. After excavation and preparation work of up to several hundred hours on each piece with a fine-pointed needle, specimens were purchased by museums, private collectors or consumers for use as wall decorations and tiling. In 1993, it was discovered that collectors had used bulldozers to illegally excavate beds on public land near Farson, Wyo., leaving a scene of destruction that one Bureau of Land Management geologist compared to "an Air Force bombing range."

In reaction to such exploitation, Congress set aside the property as a national monument to preserve some Green River Formation outcrops for public viewing and enjoyment. Quarries within the monument are now worked on a limited basis by staff experts. Nearby, the largest remaining commercial quarry in the state, dating from 1943, is run on state land under a state lease by Carl and Shirley Ulrich.

The turnoff to Fossil Butte National Monument north of U.S. Highway 30 is about 12 miles west of Kemmerer, Wyo. The monument features a visitor center displaying fossils and interpretive information and offers limited opportunities to volunteer in a fossil quarry. For admission fees, hours of operation or other information, call (307) 877-4455 or visit www.nps.gov/fobu/index.htm

It is illegal to collect vertebrate fossils such as fish from public land without a permit or from private land without permission of the landowner.

The Ulrich family runs Ulrich’s Fossil Gallery, a private fossil-preparation business and gallery on land next to the monument. The Ulrichs also offer summer visitors the opportunity to quarry fossils for a fee on leased state land. The Ulrich operation is clearly visible from the entrance road to Fossil Butte National Monument.