The Saratoga and Encampment Valley Railroad

The Saratoga and Encampment Valley Railroad

The railroad hailed once as the “only line to the great Wyoming copper mining district” in the upper North Platte Valley failed to arrive in time for the copper boom—but still carried passengers and cattle for decades, and lumber for nearly a century.

Construction setbacks combined with smelter problems and a drastic fall in copper prices meant that the trains of the Saratoga and Encampment Railway Company came “too late to save the day for the mining speculators,” according to author and historian Candy Moulton, a former editor of the Saratoga Sun. 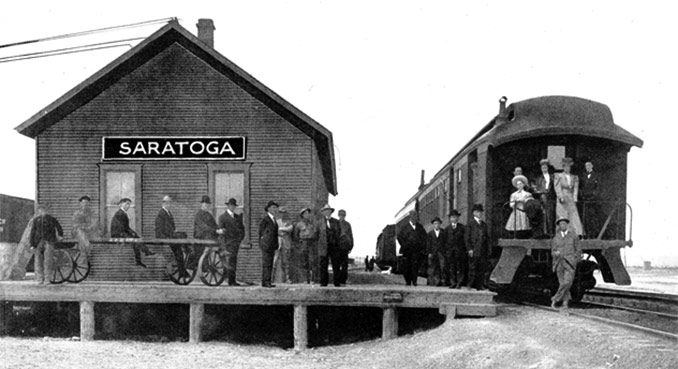 In February 1904, the Grand Encampment Herald quoted a report from the Cheyenne Leader explaining that, according to an “authoritative source,” the Union Pacific Railroad board of directors had appropriated $6 million to construct a branch line from Walcott, Wyo., south through the Encampment, Wyo. area to Craig, Colo., and eight miles along the Bear River to end at Elkhorn, where there were large coal deposits. Construction of the 125-mile-long route was expected to be easily completed by the end of the year.

That idea did not turn out as planned. In July, the Herald noted the need for a railroad to help further the development of the copper and gold mines in the area around the southern, upstream end of the North Platte Valley in south central Wyoming. The newspaper optimistically predicted that the arrival of a railroad would increase the permanent population of Encampment by 200 percent in one year. But the construction of the line took much longer.

According to Moulton, the original promoter of the railroad was E. H. Powers, who called it the Denver, Yellowstone Park and Pacific. Powers surveyed a route from Denver to Walcott, Wyo., where the proposed road would meet the Union Pacific line across southern Wyoming. Powers also did some grading on the line between Saratoga and Walcott. In September 1905, the Saratoga and Encampment Railway Company incorporated and purchased Powers’ interest.

By the next year, construction of the railroad was underway. Grading the road and getting ties took longer than expected. For the 25 miles between Saratoga and Encampment, an estimated 70,000 ties were needed.

The first locomotive arrived in Walcott on May 19, 1907, when track laying began. The train came the 20 miles from Walcott to Saratoga in mid-July. The engineer delighted the large crowd with “prolonged tooting of the engine whistle,” according to the newspaper report. “It was certainly a great day for Saratoga when an engine whistle could wake the echos [sic] along the North Platte River and go eddying off across the prairies to the grand old mountains on either side of the valley.” Further celebrations would include “a big free trout dinner and lots of fuss and feathers.”

The fete came in late August so that local ranchers would have completed haying and could participate. The newspaper called the event “a hummer” and estimated 3,500 trout and more than 1,000 loaves of bread were served along with butter, pickles, Saratoga chips and coffee. Gov. Bryant B. Brooks, U.S. Sen. Clarence Clark and U.S. Rep. Frank Mondell rode a special train from Rawlins, entertained by the Elks band along the way, to take part in the festivities.

At that time, passenger fare to ride in a boxcar from Walcott to Saratoga was $1.25 and the minimum freight charge was 50 cents. The Sun reports claimed 35 to 50 passengers rode the train “each way every day.”

Construction slowed considerably as workers laid track on the second leg of the line, from Saratoga on south to Encampment. The terrain was more rugged and severe weather further hampered their efforts.

The first passenger train reached Encampment at noon on July 18, 1908, a full year after the first locomotive rolled into Saratoga. The Grand Encampment Herald report claimed the sound of the whistle was “music to the ears of the citizens” who thought “the hope of years had been realized.”

But copper prices had fallen and dreams of promoters and stockholders never materialized. According to Moulton, the Penn-Wyoming Copper Company sold to United Smelters, Railway and Copper Company for $10 million in August 1908. The railroad work was completed to Encampment in February 1909; the total distance covered from Walcott was 44.73 miles. 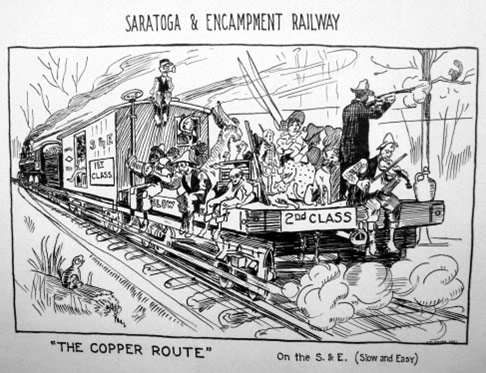 By the autumn of 1910, the United Smelters, Railway and Copper Company was bankrupt; Penn-Wyoming filed a lawsuit to obtain control of the valuable Ferris-Haggarty copper mine property and litigation ensued until foreclosure proceedings were held in 1913. Instead of huge loads of ore, the trains hauled lumber, cattle and agricultural products and carried passengers.

In 1928, a group of citizens formed the Platte Valley Railroad Committee and raised $100,000 in cash from local residents to purchase the S&E from the Morse Brothers Machinery and Supply Company, which was in receivership. The plan was that the group would present the railroad, incorporated now as the Saratoga and Encampment Valley Railroad, to the Union Pacific for “perpetual operation.”

The arrangement worked for decades, but “perpetual” is a very long time. In 1976, the Union Pacific, despite protests from local citizens, initiated abandonment proceedings. The tracks, including the river bridges, were removed from Encampment north to the north side of the North Platte River in Saratoga. The UP donated the salvaged ties to the Saratoga Lions Club, which sold them to another railroad; the proceeds funded scholarships for area youth. In November 1987, the Union Pacific sold the remaining line of the S&E to David Durbano, owner of the Wyoming and Colorado Railroad Company. By that time, the Saratoga-to-Encampment section had already been removed.

When the Louisiana-Pacific Corporation lumber mill in Saratoga shut down in January 2003, revenue disappeared for the remaining line from Saratoga to Walcott. In 2004, the Wyoming and Colorado Railroad Company filed for abandonment with the federal Surface Transportation Board, but the agency denied the request.

Mike Glode, owner of Saratoga’s Shively Hardware, who at one time served as chairman of a local joint powers board formed in the 1970s to improve water and sewage infrastructure in the town, said in a recent interview that the board also had economic development authority. After the lumber mill closed in Saratoga and the railroad abandonment proceedings began, the board negotiated a verbal agreement with the Carbon County Commissioners to purchase the railroad from Durbano at scrap value—an option that is available when a railroad owner files for abandonment.

A year passed, however, before the denied abandonment application was allowed to be resubmitted. In that time, prices for steel rose dramatically, tripling the railroad’s value. The commissioners could not pay the higher price, and the purchase agreement failed.

The railroad was abandoned. The last train left Saratoga in 2007. Durbano owns the right of way from the North Platte River in Saratoga to Walcott, although some of that property north of Saratoga is checkerboard land, the square-mile sections of property set aside for 20 miles on each side of the railroad line and owned by the Union Pacific and the U.S. government in an alternating, checkerboard pattern as a result of the 1864 Pacific Railroad Act.

Saratoga Forest Management, which bought the Saratoga lumber mill and began operating it in 2013, purchased from Durbano the section of railroad that runs through the mill’s property, but the products produced there today are hauled by trucks.

All that remains now of the S&E, which locals sometimes called the “Slow and Easy,” are some fond memories and the railroad grade, still visible in some places. Glode remembers riding the caboose from Saratoga to Encampment when he was a youngster. He said the grade is visible all the way between the two towns “if you know where to look.”

Glode doesn’t believe the railroad will ever be rebuilt because the economics don’t warrant it. An extraordinary ore strike might resurrect the line sometime, he said, but “trees will never pay for it.” 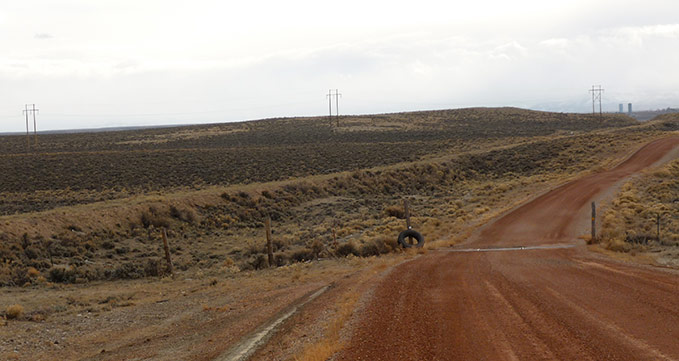 First passenger train of the 45-mile Saratoga and Encampment Railway reaches its terminus at Encampment, Wyo. in the upper North Platte Valley.

Industry, Politics and Power: the Union Pacific in Wyoming
Encampment, Wyoming: Copper, Lumber and Rendezvous
The North Platte River Basin: A Natural History
Carbon County, Wyoming
Saratoga, Wyoming: "Where the Trout Leap in Main Street"
The Mountain View Hotel
'I Have Lost My Train in the River': Carnage on the CB&Q