'I Have Lost My Train in the River': Carnage on the CB&Q

'I Have Lost My Train in the River': Carnage on the CB&Q

On Sept. 27, 1923, John Trevett celebrated his 69th birthday with his family in Casper, Wyo. Following a special supper, they planned to board the Chicago, Burlington & Quincy No. 30 passenger train headed to Denver for the first leg of their journey to California. At the last minute, he looked out the window at the rain and decided not to go.

Others in Casper spent that dreary Thursday evening at the movies, watching “The Purple Highway,” at the Rialto, or “The Toll of the Sea,” at the Wyoming, hailed as “the first motion picture in natural colors.” Some attended a Silk Stocking Dance at the Arkeon Dancing Academy where a dozen pairs of silk stockings were given away to those fortunate ladies with winning ticket numbers.

When a news flash interrupted the movies, many theater patrons thought it was because of a refinery explosion. The oil business and the refining business were booming in Casper at the time. However, this news reported a train wreck. 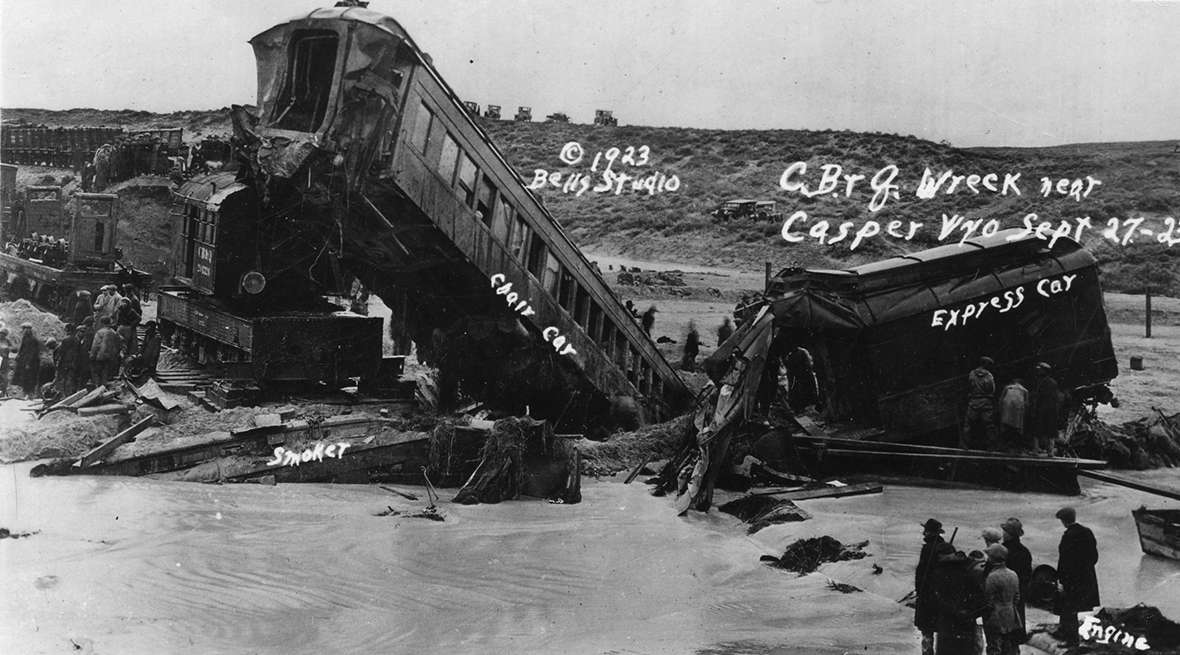 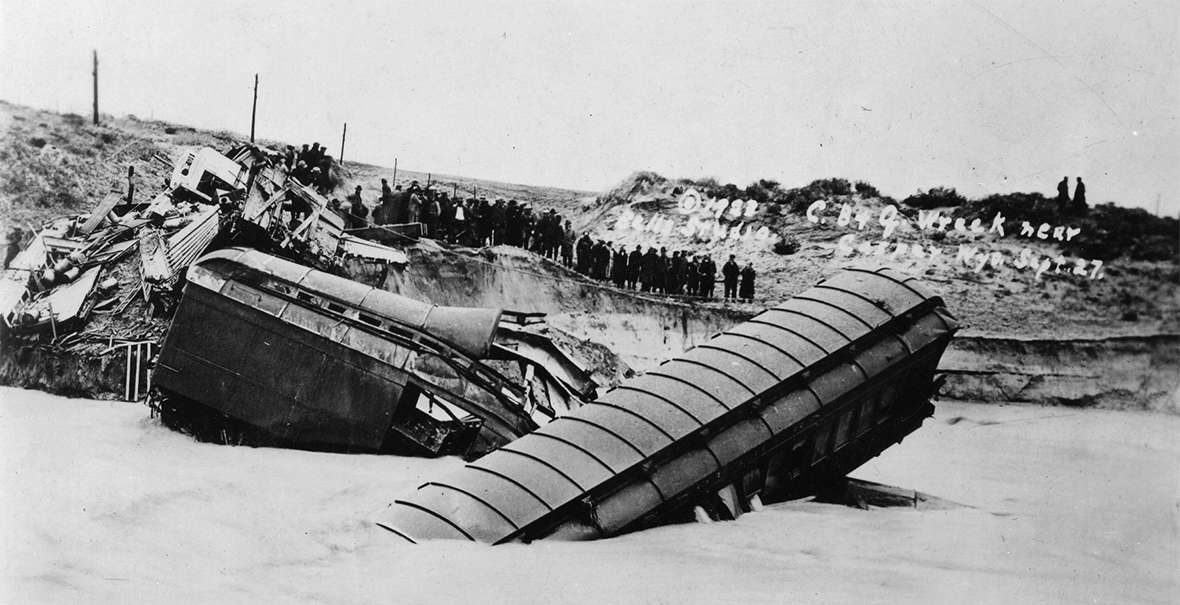 The CB&Q No. 30 had crashed into Cole Creek near its mouth about 16 miles east of Casper. Some of the bodies were swept by flooding waters into the North Platte River about 200 yards away.

Estimates of the number of casualties vary, but it was clearly the worst train crash in Wyoming’s history. Some reports estimate 30 or 31 were killed in the accident out of 66 total passengers who rode the train.

One 1978 newspaper article quoted long-time Casper resident Edness Kimball Wilkins, who was reportedly given the official investigation report of the crash, as saying that a crew of between 60 and 80 construction workers who had been building tanks at the Clayton tank farm near Glenrock were aboard the ill-fated train. That article also noted that the passenger load that night was “the lightest it had been for quite some time.”

It had been raining for several days. That Thursday, a drizzle had been followed by steady and sometimes heavy rains. Railroaders had inspected the route at various times during the evening. Tom Cole, an early-day railroad employee, recalled in a 1976 Casper Shopper report that the railroad’s roadmaster had traveled across the wooden Cole Creek bridge at 6:15 p.m. on a local freight train. (Cole’s name is not related to the name of the creek, which was first known as Coal Creek and later came to be recognized with the different spelling.) Other reports mentioned the continuing rain but indicated the bridge was still secure and the creek’s water level was “less than 16 inches.”

Engineer Ed Spangler replaced Roy Jackson who was regularly assigned to trains 29 and 30. Jackson “had laid off on arrival of No. 29 on the morning of Sept. 27,” Cole recalled. Engineer Spangler was informed that the bridge had been inspected and was “urged to use extreme caution in traveling.” The train departed for Denver at 8:30 p.m. Some of the passengers who chose the sleeper cars went to bed soon after boarding.

The bridge washed out ahead of the train’s arrival at Cole Creek. The 100-ton steam locomotive, Colorado & Southern No. 350, nose-dived into Cole Creek about 45 minutes after leaving Casper. Several of the cars the engine pulled crashed into it and each other. According to Cole, the mail car, express car, day coach, smoker car, and one Pullman car went off the tracks. Only two Pullman cars remained on the tracks.

Several people involved in the accident are said to have reported the incident. The 1978 article credits the flagman, who rode on the car farthest to the back, as leaping from the train after the crash and running four miles to the Fry way station east of Casper to call officials. According to the recollections of Wilkins contained in a 1973 Casper Star-Tribune article, the flagman said, “I have lost my train in the river.”

Other reports state that passenger Dan J. McQuaid crossed a bridge over the North Platte River a little way west and upstream, then swam across Muddy Creek to reach Muddy Station and telephone the CB&Q dispatcher’s office in Casper with the first news. Another article states that Casper hotel owner Henry Wyatt, also a passenger, escaped from the Pullman car he rode in and walked a mile to telephone railroad officials.

A rescue train arrived by 11 p.m. Its headlights helped illuminate the horrific scene, made even more terrifying by the screams and moans of the people trapped in the wreckage. Darkness, flooding and continuing rain hampered the rescue.

Tom Cole rode out the next morning on the work train. Though the water had receded, the locomotive had sunk out of sight in the mud. Cole recalled, “One end of the mail or baggage car was protruding from the sand near the opposite bank with a chair car laying over [the] demolished top of the car.”

“The only body I viewed,” he added, “was a man’s legs protruding from under the end of the mail car.”

Rescue crews included roundhouse, repair track, section and bridge gangs from both Casper and Alliance, Neb. Wrecker derrick crews also assisted in the cleanup, which lasted from Sept. 27 to Oct. 15, 1923.

The Casper Daily Tribune printed a casualty list on its front page on Sept. 28, It was incomplete, however, as some of the bodies were carried downstream and not found for months.

The newspaper recognized a civil engineer from Salida, Colo., M.A. Robinson, a conductor on the Pullman car named Coburn and a porter named Littleton as heroes who used a rope made of bell cords as a guide to help rescue people. The trio returned three times to a submerged compartment of one of the cars to assist others. Robinson, the report said, was on the train traveling home with his wife. By the time of the newspaper report, she was in the hospital in Salida giving birth to their child.

Recovered bodies were laid on a platform at the depot for identification.

Contemporary articles list names and dates of some of the deceased who were found much later: Douglas resident Charles Guenther, April 12, 1924; Conductor Guy Goff, May 24, 1924; Engineer Ed Spangler, Jan. 22, 1925, when workmen were rebuilding the bridge. Four years after the accident, a mailbag from the mail car was recovered.

The accident, which Tom Cole estimated to cost “close to a million dollars,” with the losses to the railroad cars totaling $98,000, made national headlines. Reports indicated that the engineer had applied brakes shortly before the crash.

An investigation conducted by the Interstate Commerce Commission in the years before there was a National Transportation Safety Board, ruled that the wreck was “accidental and unpreventable,” according to one news report. The railroad was said to have paid $60,000 in settlements to survivors and heirs of the dead.

Dave Johnston, for whom the power plant at nearby Glenrock, Wyo., is now named, took photographs of the accident. Johnston spoke at a Casper Kiwanis program on the 50th anniversary of the crash. He recalled that Natrona Power, predecessor to Pacific Power and Light, was building the North Casper steam-electric plant in 1923 and bids were being taken on Sept. 27 on power plant equipment items from Denver representatives. One of those representatives, Johnston said, was Dan McQuaid, among the first people to call in the crash. McQuaid called the accident “a hell I will never forget.”

The locomotive was eventually raised from the creek bed and rebuilt in Denver, a task that took many months. It operated for 27 more years until it was scrapped.

The Trevett family boarded a different train later for their move to California. After spending a dozen years there, they returned to Casper. John Trevett, according to the 1978 article that contained his daughter-in-law’s memories of the ill-fated 1923 train, had helped build the Union Pacific railroad line across Wyoming from Nebraska to Utah when it was rebuilt in 1899 and 1900. 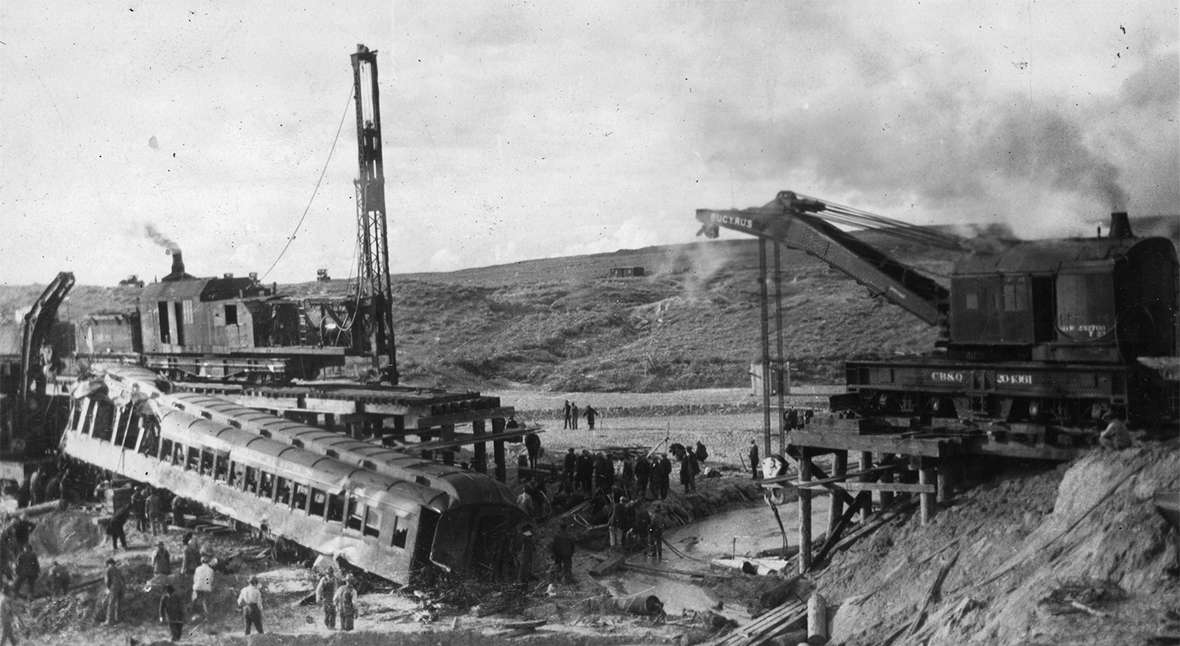 The Casper College Western History Center, located in the Goodstein Library at Casper College, 125 College Drive, in Casper, Wyo., contains an excellent collection of photo and archival materials on local and regional history. The center has an extensive collection of material connected to the cattle business in central Wyoming.