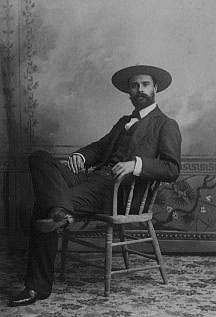 Owen Wister, the writer credited with creating the classic Western hero and the popular western novel, was born July 14, 1860, into an upper-crust family in Philadelphia. His maternal grandmother, Fanny Kemble, was a famous Shakespearean actress as well as a progressive woman for her time, as she was an abolitionist and a divorcee. Wister’s mother, Sarah Butler Wister, was a sophisticated South Carolina native who spoke French and Italian, played several musical instruments and upheld high standards in the arts. Wister’s father, Owen Jones Wister, was a prominent doctor who, in spite of a well-regarded sense of humor, did not care for music and the other arts, but had a strong work ethic.

Meanwhile, in the summer of 1885, he took his first trip West, to Wyoming, where he stayed at Major Frank Wolcott’s ranch on Deer Creek, south of what is now Glenrock, Wyo. Wister had been close to a nervous breakdown, and the trip was restorative. It opened his eyes to the pristine beauty of the country and to western characters—evocative subject matter. This would be the first of 15 trips out West from 1885 to 1900; on these trips, Wister kept extensive diaries that are now housed in the American Heritage Center at the University of Wyoming. His notes would serve him often in the years to come.

Wister’s first published story, “Hank’s Woman,” appeared in 1892. In it, one sees many characteristics of Wister’s work: descriptions of both idyllic and less benevolent landscapes, portrayals of naive and wiser cowboys and the conflict between frontier values and those of civilization. Also, this story introduces the persona of the tenderfoot narrator, who appears in many of Wister’s stories.

During this early part of his writing career, Wister also published an essay entitled “The Evolution of the Cow-Puncher,” which appeared in Harper’s Monthly in 1895. In this selection, Wister articulates the creed that runs through his fiction. The cowpuncher, in Wister’s terms, is a natural nobleman who has both racial and cultural ties with the Anglo-Saxons. The Westerner is not just a herdsman but a horseman, for “in personal daring and in skill as to the horse, the knight and the cowboy are nothing but the same Saxon of different environments.”

Wister continued to write short stories in the local-color mode, popular in the late 19th and early 20th centuries. A collection, Red Men and White, appeared in 1896and was favorably reviewed by Atlantic Monthly critic William Dean Howells, and by Wister’s friend and Harvard classmate, bestselling author Theodore Roosevelt. Another collection, The Jimmyjohn Boss, which included a revised version of “Hank’s Woman,” appeared in 1900. In between these two collections, in 1897, Wister published Lin McLean, a medley of short stories that he considered a novel. The title character first appeared in the stories “Hank’s Woman” and “How Lin McLean Went East,” both published in 1892. Although some critics do not consider Lin McLean to be successful as a novel, it is nevertheless interesting as a sustained treatment of the natural Western hero.

In 1902, Wister saw the publication of his most famous work, The Virginian. This novel has several similarities to Lin McLean. It focuses on a character who first appeared in “Hank’s Woman,” it consists of stories worked together into a book-length narrative and the titled chapters vary from third-person omniscient narration to first-person narration by the tenderfoot.

But in contrast to Wister’s earlier work, The Virginian presents a fuller treatment of his vision of the Western hero, the West and America. From the novel’s subtitle—“A Horseman of the Plains”—to the protagonist’s first appearance and on through the story, the hero is chivalric. The Virginian reads Sir Walter Scott, and Molly Wood, the heroine, reads Jane Austen, just as the novel blends the conventions of historical romance and social realism. The hero is a Southerner and a Westerner while Molly is a Northerner and an Easterner, and their union brings the country together symbolically. Passages in the novel, delivered sometimes by the tenderfoot narrator and sometimes by key characters, express Wister’s ideas of natural nobility and measured inequality.

These ideas are introduced in “The Evolution of the Cow-Puncher,” where the Anglo-Saxon cowboy is portrayed as a natural aristocrat, superior to the Swede farmer and the Mexican vaquero—“this small, deceitful alien.” In Chapter 12 of The Virginian, “Quality and Equality,” the Virginian tells Molly, “equality is a great big bluff.”

In the next chapter, the narrator resumes the topic and declares, “All America is divided into two classes—the quality and the equality. … And true democracy and true aristocracy are one and the same thing.” The idea of hierarchy is illustrated a few pages later: “And while the equality [the cowboys] absorbed themselves in a deep but harmless game of poker by the side of the railway line, the Virginian and I sat on top of the car, contemplating the sandy shallows of the Platte.”

The novel was the best-selling book in the U.S. for two years in a row, and Wister became famous and rich. Although none of his later work achieved that level of success, he continued to write short stories for magazines and to publish them in collections. Members of the Family came out in 1911, and When West Was West appeared in 1928. Each of these books has a story that may interest modern readers. “The Gift Horse,” in Members of the Family, takes place in the Wind River country, again with the tenderfoot narrator who is learning the ways of the country. “At the Sign of the Last Chance,” in When West Was West, again features the tenderfoot narrator, this time in later life when he meets up with some old cowboy pals who are seeing the end of an era. This was Wister’s last Western story, published 10 years before his death.

Wister wrote many other books, notably a biography of Ulysses S. Grant, a biography of George Washington, a novel set in South Carolina and an account of his lifelong friendship with Theodore Roosevelt. A bibliography published in 1958 in a book of his western journals and letters credits Wister for writing 22 books of fiction, history, political essays, biography, verse and drama. For people interested in Wyoming literature and history, however, his Western fiction is most important.

And the Virginian has stayed popular since it was published. Wister himself wrote a stage adaptation of the novel in 1903, and the play toured for 10 years. In the first century of its existence, the book sold more than two million copies, spawned five movies and a long-running 1960s TV series.

Wister’s writing was based on contemporary observation and firsthand experience. Reading his Wyoming stories transports a person back to an earlier time and place. In the opening paragraph of “Hank’s Woman,” the narrator says, “Westward, the Tetons lifted their peaks pale and keen as steel through the high, radiant air. Deep down between the blue gashes of their cañons the sun sank long shafts of light, and the glazed laps of their snow-fields shone separate and white upon their lofty vastness, like handkerchiefs laid out to dry.” Similarly, the same narrator begins “The Gift Horse” with “High up the mountain . . . I sat, and looked down . . . at Wind River shrunk to map-size, a basking valley, a drowsy country, tawny and warm, winding southeastward away to the tawny plain, and there dissolving with air and earth in one deep, hazy, golden sleep.” 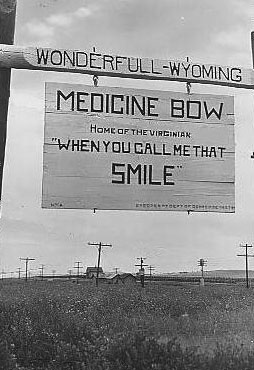 The view of the West as Eden is sometimes tempered with glimpses of the tawdry effects of civilization. In the second chapter of The Virginian, the tenderfoot narrator describes the town of Medicine Bow (still today the home of the Virginian Hotel): “They [the houses] seemed to have been strewn there by the wind and to be waiting till the wind should come again and blow them away. Yet serene above their foulness swam a pure and quiet light, such as the East never sees; they might be bathing in the air of creation’s first morning.” In the next paragraph, he continues: “There they stood, rearing their pitiful masquerade amid a fringe of old tin cans, while at their very doors began a world of crystal light, a land without end, a space across which Noah and Adam might come straight from Genesis.”

Leaving town, in Chapter 4, the narrator continues his contrast, this time with details from the natural world. “We passed the ramparts of Medicine Bow,—thick heaps and fringes of tin cans, and shelving mounds of bottles cast out of saloons. The sun struck these at a hundred glittering points. And in a moment we were in the clean plains, with the prairie-dogs and the pale herds of antelope. The great, still air bathed us, pure as water and strong as wine; the sunlight flooded the world.” In the same chapter, the narrator balances an elegy for the cowboy with a disapproval of littering: “The cow-boy is now gone to worlds invisible; the wind has blown away the white ashes of his camp-fires; but the empty sardine box lies rusting over the face of the Western earth.” Thus the taint of civilization is often present.

The work of Wister, and especially The Virginian, has a mixed reception today. Wister’s views of social order and Anglo-Saxon superiority are elitist, and his belief in the right of the ruling class—owners of the large ranches—to rub out smaller operators is repugnant to many people. (Wister’s 1885 host, Frank Wolcott, led the cattlemen on their 1892 invasion of Johnson County to kill rustlers and small ranchmen in what came to be called the Johnson County War.) Readers looking for a western novel with the classic narrative structure will find a hybrid cross with the novel of manners. And, in terms of narrative point of view and novelistic structure, the two books he claimed as novels look like cut-and-paste jobs.

In spite of these limitations in ideology and craft, however, Wister deserves to be read. He wrote about a subject matter that up to that time had been the fodder of dime novels, but he approached it with a literary prose style and moral seriousness. He believed in the West, especially Wyoming, as a place where individuals could find rejuvenation, escape the confines of the East and realize their potential. Although Wister saw this ideal as fading, and portrayed it in elegiac and nostalgic terms, it is an ideal that many Wyoming people still believe in and that the rest of the world often sees as inherent in the state.

25-year-old Owen Wister catches a two-hour snooze on the counter of the general store in Medicine Bow, while waiting to meet a train. His bestselling novel, The Virginian, published in 1902, opens with a similar event.

The Virginian Hotel in Medicine Bow and Owen Wister’s cabin, moved to Medicine Bow from Jackson Hole in 1975, are still tourist attractions in the town. See http://www.wyomingtourism.org/overview/Historic-Virginian-Hotel/3261 and http://www.medicinebow.org/