In the 1940s and '50s, a hotel and dance pavilion in tiny Elk Mountain, Wyo., routinely drew huge crowds to hear big-name acts from Hank Thompson to Louis Armstrong. Though sheriff’s deputies were often present, fights were common, and one, in 1946, ended in a fatal shooting. The enthusiastic crowds traveled long distances to hear the music and for the chance to dance on a floor built on springs. 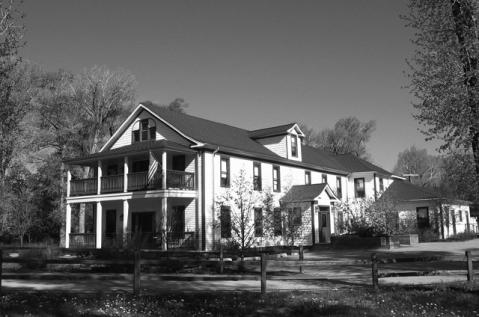 Today, the pavilion is gone, but the Historic Elk Mountain Hotel remains, on a site that has served travelers since it was an 1860s stage stop on the Overland Trail. The hotel, a three-story folk Victorian building painted white with green trim, stands near the bridge over the Medicine Bow River. Nearby, Elk Mountain itself rises to 11,156 feet and is visible from the hotel grounds.

The river crossing became a stage stop on the Overland Trail in 1862, when stagecoach king Ben Holladay moved the stage line south from the older Oregon Trail route, according to current hotel owner Susan Prescott-Havers. The stage stop and its boarding house fell into disuse after the Union Pacific Railroad was built across what’s now southern Wyoming in 1868. The wooden boarding house, known as The Crossing, was destroyed by fire.

John Evans built a hotel on the site in 1905. When Evans built his hotel, the structure was the first place to have electricity in the area. The coal-fired electrical plant served others nearby as well. The hotel offered 16 bedrooms upstairs and a bar in what is now the dining room. The town of Elk Mountain was incorporated in 1909.

In 1947, Hanna, Wyo., resident Mark Jackson bought the hotel and pavilion from the Evans family. He remodeled the dance hall the next year, and often performed there with his Cowboy Band. Jackson also enticed traveling bands to stop in Elk Mountain. Many famous musicians—country singers Hank Thompson and Jim Reeves and bands led by Tommy Dorsey, Louis Armstrong and Lawrence Welk—performed in Elk Mountain over the years.

Rawlins, Wyo., resident Ralph Penman remembers how people from around the region packed the pavilion on summer Saturday nights, drawn by the music and the chance to dance on the bouncy floor. Groups of local teenagers often drove there, he says. “It was a good place to go. We knew most everyone there.” The cost of admission, according to old posters displayed in the hotel today, was $2 for “gents” and $1 for ladies. 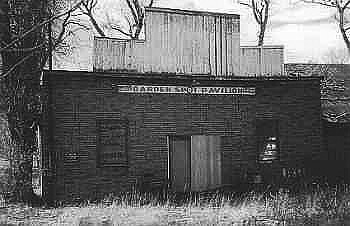 There were usually one or two fights every Saturday night, Penman says. On May 18, 1946, one of those conflicts resulted in a tragedy. Two deputies tried to break up a number of fist fights that night and were knocked down in the process. Deputy Sheriff Claude Simmons of Hanna drew his gun to fire a warning shot in the air, but someone grabbed his arm and pushed it up. When his arm came down, his gun barrel struck a person in the head. The gun discharged. The bullet struck and killed a bystander, 40-year-old John Milliken, Jr., of Hanna. Within the week, a coroner’s jury ruled Milliken’s death accidental, and Simmons was exonerated.

Hanna resident Robert Warburton, now deceased, recalled in a 2002 interview conducted by local historian Nancy Anderson, that the dances always drew huge crowds. Six deputies were stationed at various points in the bar, the dance hall and outside to help keep order. Warburton, who was in partnership with Jackson in the 1940s and 1950s, said that one night he counted 36 different state license plates on cars in the parking lot, and he remembered 56 different bands having performed at the pavilion.

Weekends were often tightly scheduled with a Saturday evening dance that began around 8 p.m. and continued until 3 a.m., followed by a Sunday afternoon rodeo and another dance after that. “Sometimes,” Warburton said, “I’d get up on Saturday morning and not go to bed again until Monday.”

According to current owner Prescott-Havers, the Jackson family retained ownership of the hotel for many years. When both the hotel and the pavilion were named to the National Register of Historic Places in the mid-1980s, the owners were a couple named Martin. In 1999, Peter Thieriot of California purchased the property.

Thieriot completely restored the hotel, an intensive two-year project, during the early 2000s. It now offers 12 rooms, each with private bath, and a third-floor conference room where the attic once was located. The Garden Spot Pavilion was demolished for safety reasons.

Prescott-Havers and her husband, Arthur, from Silicon Valley, Calif., bought the hotel in 2007. A Cordon Bleu-trained chef, she can accommodate 40 people in the modern dining room.

The Elk Mountain Hotel is located at 102 East Main St. in Elk Mountain, Wyo. From Interstate 80, take Exit 255 and travel south about three miles. Turn left and cross the bridge across the Medicine Bow River.

For more information or to make reservations, call (307) 348-7774 or visit http://www.elkmountainhotel.com.