The Shoshone and Arapaho have authority to manage game on the reservation under tribal regulations. The joint Eastern Shoshone and Northern Arapaho Tribal Game and Fish Department manages big game species. Since 1972, U.S. Fish and Wildlife Service biologists have assisted the tribes with big game management. Within the reservation, the Wyoming Game and Fish Department has a management role only on private property owned by non-Indians, such as the lands of the Riverton Reclamation Project.

The tribes were early to recognize the importance of undeveloped habitat for wildlife. In the late 1930s, decades before the passage of the 1964 Wilderness Act, they created the Wind River Roadless Area, which prohibited development in a prime hunting ground encompassing 188,000 acres of the Wind River Range. 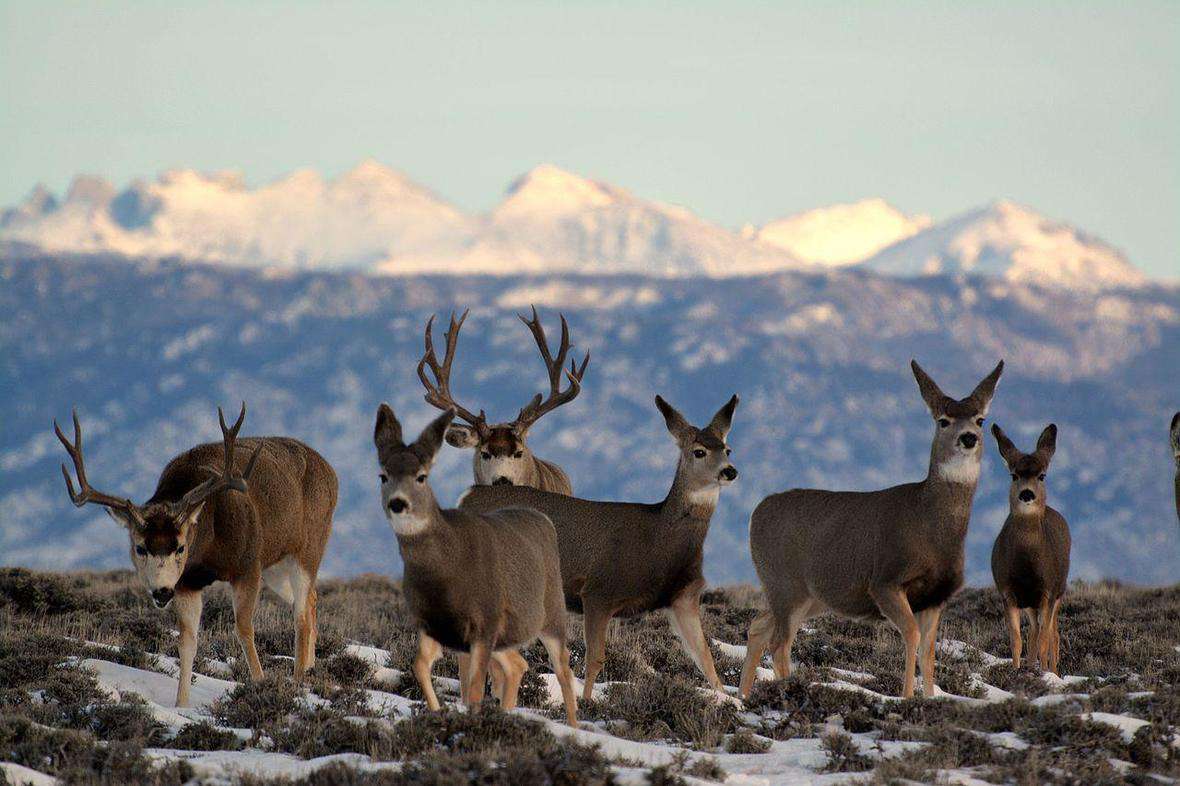 Game populations on the Wind River Indian Reservation fluctuated under a variety of management regimes throughout the 20th century. In 1906, lands north of the Wind River were opened for non-Indian homesteading. For the next 35 years, the state of Wyoming regulated hunting seasons and harvest quotas north of the river. Pius Moss, an Arapaho elder, said this led to plentiful game in that area, particularly in the Owl Creek Mountains. Meanwhile, subsistence hunting by tribal members reduced game numbers south of the Wind River.

After 1939, wildlife management on the northern portion of the reservation returned to the tribes. Ungulates rebounded when the tribes instituted a game code in 1948, restricting harvest to one bull elk and one buck deer during a September–December season. In 1953, the tribes rescinded the code, defaulting to unrestricted harvest.

Leaders of both tribes drafted a new game code in 1979 to reinstate harvest quotas and hunting seasons. The concept grew controversial due to differing perspectives on tribal sovereignty, subsistence hunting rights, game conservation and the accuracy of wildlife surveys. The Shoshone Tribe adopted the game code and several Arapaho Business Council members supported it, but the Arapaho General Council, an assembly of tribal voters, voted not to adopt it. Ultimately a U.S. District Court ruling ended the stalemate between the tribes, and the code was implemented in 1984.

Today some who opposed the game code still feel it was unwarranted. Others assert the code restored migratory big game populations to numbers that allow sustainable harvest. As of 2017, the reservation was home to about 10,000 elk, an increase from the U.S. Fish and Wildlife Service estimate of 2,550 in 1982. Today, 1,000 Shoshone and Arapaho tribal members actively hunt big game on the reservation.

Northern Arapaho leaders started planning to reintroduce Yellowstone bison near Wind River Canyon in 2009, but ultimately the Arapaho General Council decided against it, largely due to concerns of potential brucellosis transmission to cattle. The disease can cause cattle to abort their young. In 2016 and 2017, the Eastern Shoshone Tribe reintroduced 20 bison to the reservation, the start of what some hope will one day become a much bigger herd of wild, free-roaming bison.

Through all these changes, migratory ungulates—and more recently grizzlies  and wolves—have moved freely across the boundaries of the reservation and into the mountains of the Greater Yellowstone Ecosystem. In 2018, the Tribal Game and Fish Department, U.S. Fish and Wildlife Service, and the University of Wyoming began mapping elk- and deer-migration corridors on the Wind River Indian Reservation in detail, gathering information that will aid management on these interconnected landscapes in the heart of Wyoming. 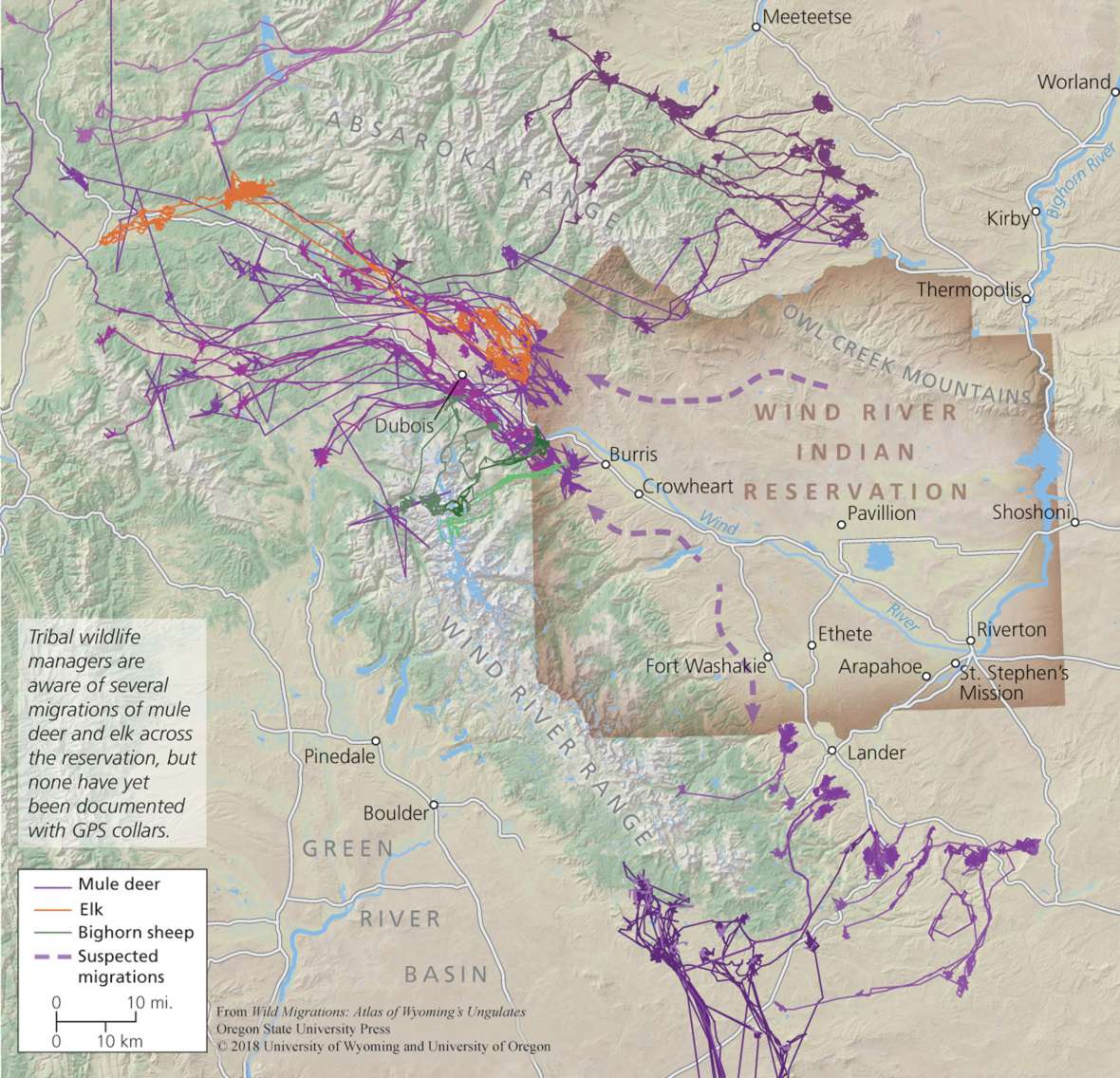 The Tribes Sell Off More Land: The 1905 Agreement
When the Tribes Sold the Hot Springs
Fragmenting Tribal Lands: The Dawes Act of 1887
The Arapaho Arrive: Two Nations on One Reservation
Coming to Wind River: The Eastern Shoshone Treaties of 1863 and 1868
The Bighorn Basin: Wyoming's Bony Back Pocket
Who gets to hunt Wyoming's elk? Tribal Hunting Rights, U.S. Law and the Bannock 'War' of 1895

The Wind River Indian Reservation is the primary site of most of John Roberts’s life and ministry. The reservation communities of Fort Washakie and Ethete are central to the story. Trout Creek Road, Fremont County 252, which turns southwest off US 287 at Fort Washakie, is the turnoff for the Roberts Mission and Sacagawea Cemetery. It is the continuation of the road from Ethete after it reaches U. S. 287. Hine’s Store, a gas station and convenience store, marks the junction. Travel west for about eight miles and you will come to the mission grounds located on the left. The historic Church of the Redeemer has been moved here, and the remains of the Shoshone Mission School for girls are also at this spot.

Also located there is the Chapel of the Holy Saint’s John, which was the chapel for the school. The log building behind the chapel also served as the Roberts family residence. The mission grounds today also contain the present Episcopal Church, known as Saint David’s, and a parish hall. The outbuildings and the old orchard remain from the days of the mission. A historic marker is located on the site. This is the 160-acre plot donated by Chief Washakie. If the chapel is open, note the baptismal font located in the doorway that was dedicated to Washakie. There is no charge, and there is rarely anyone at the site. Church services are held on Sunday, and visitors are more than welcome to attend.

Shortly after the turnoff to the mission on Trout Creek Road, there is a right hand turn.  Take the turn and travel north to reach the Sacagawea Cemetery. It is on the left and can’t be missed. It is here that Sacagawea of Lewis and Clark fame is said to be buried. Her grave is prominently marked. This is the Shoshone tribe’s main burial ground and the graves speak for themselves. A recently dedicated statue honoring Sacagawea has been constructed on the north side of the cemetery. The old log structure off the parking area was once the original worship place for the Episcopal Church before John Roberts’s arrival. Visitors are welcome to visit the cemetery.

When in the agency headquarters of Fort Washakie, you can travel west for about a mile until you reach the old military cemetery on the right side of the road. This is the burial place of Chief Washakie. Other Shoshones are buried there as well, but the U. S. Army graves have since been removed. The Wind River Agency headquarters are located in Fort Washakie proper.

The final site to visit is in Ethete. Just south of the traffic light in the center of the community is Saint Michael’s Mission. The buildings are set out in a circle honoring Arapaho tradition. The post office is located in the circle as well as the “Our Father’s House” church. The church is a log structure with a picture window overlooking the Wind River Mountains. The Chapel of the Transfiguration in Jackson Hole was modeled after this building. Visitors are welcome at church services and may tour the building if there is anyone present.