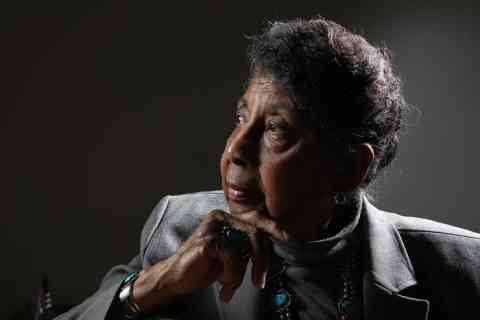 Her son, Wyoming Rep. James Byrd, a Democrat like his mother, said in a recent email interview, “When she took on a project there was no stopping until a solution had been found, even if it meant restarting and retooling many times. She was most passionate about social justice, hence the Martin Luther King holiday bill.”

And although Liz Byrd was the primary sponsor of that bill in Wyoming and persisted until it became law—an achievement she was quite proud of—her son said that she also was proud of her work on behalf of the child car-seat law “because it saves lives.” She would also want to be remembered for her contribution to classroom teaching practices, he said.

Liz Byrd was born on April 20, 1926, to Robert C. “Buck” and Sudie Rhone. Her grandfather, Charles Rhone, had come to Wyoming Territory as a child in 1876, later working for the railroad and becoming a well-known cowboy.

Liz Byrd graduated from Cheyenne High School in 1944. Her application to the University of Wyoming was not accepted, probably because she was black, and “segregation was in full swing,” her son told a newspaper at the time of her death. Instead, she made plans to attend West Virginia State College.

One day in 1946, while visiting a cousin in Cheyenne at Fort F.E. Warren, at that time a Quartermaster training center, Byrd went to Post Exchange Building No. 284 to buy colas for a family gathering. Because she didn’t have a military identification card, however, she couldn’t complete the purchase.

The soldier waiting behind her in line, James Byrd, helped her, and they became good friends. He had entered the military after high school and served in a Quartermaster truck company in France in World War II, starting shortly after D-Day. The couple married in 1947, while Liz was still in college. Fort F.E. Warren became an air force base about that same time, and her husband was assigned to Camp Kilmer, N.J. He returned to Cheyenne in the autumn of 1948 and joined the Cheyenne police department.

Liz earned a degree in elementary education in 1949 and attempted to get a teaching job with Laramie County School District No. 1, but she was turned down, again, probably because of her race. She worked at Fort Warren in the post supply administration and taught classes for the 3450th Technical Training Wing for the next decade.

In 1959, the school district hired her, and according to the book Black America: A State-by-State Historical Encyclopedia, she was the first fully certified full-time black teacher in Wyoming. She reportedly received $4,400 annually for her first job at Goins Elementary.

During her career she taught mostly second graders, but also in the fourth and fifth grades, and she taught in several of Cheyenne’s elementary schools. Her son recalled, “She enjoyed all the aspects of teaching but mostly watching the students become proficient in reading/writing in second grade, arithmetic and complex problem solving in the higher grades.”

Her husband, James Byrd, eventually became the first black chief of police in Cheyenne and in Wyoming. He served for 16 years under four different mayoral administrations before retiring. He was also appointed U.S. marshal for the Wyoming district under the Carter administration.

The Byrds had three children: Robert, a dentist and retired colonel in the Wyoming National Guard who now lives in Torrington, Wyo.; Linda Byrd-Hsieh who is an accountant and office manager in Cheyenne; and Wyoming Rep. James Byrd of Cheyenne.

Liz Byrd served in the Wyoming House of Representatives from 1981-1988. One report indicated that she ran for office because she was “concerned about lack of benefits for teachers and inadequate materials used in the classroom.” When she campaigned the first time, her son James said, “She went to every event that she could regardless of size. She also went door-to-door at least two to three times, and this was when we had an at-large delegation and you ran countywide. That is probably why she finished first or in the top three most of the time.”

She was a fourth-generation Wyomingite, and a staunch Democrat. Her son said they never talked about whether it was more difficult for her to run because she was black. “However,” he said, “based on my experience there are some residents who will not accept voting for a black or minority under any circumstances.” 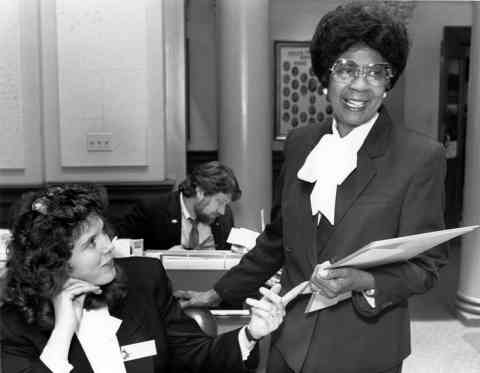 One of the things that likely made a difference in Liz Byrd’s campaigns, he said, was that, “she had the ability to listen very well and to articulate a point of view so that everyone could understand what she was talking about and the expected end results.”

She enjoyed running for office, he said, “because she loved discussing ideas with people.”

In 1984, Odyssey West, a Denver-based magazine serving mostly blacks throughout the Rocky Mountains, quoted Liz Byrd as saying, “You can achieve, but blacks must work hard for it. You must remember this is a state bound by the work ethic. They don’t believe in hand-outs. Everyone must achieve on their own merits.”

In 1989, she was one of 75 black women of distinction featured in Pulitzer prize-winning photographer Brian Lanker’s book I Dream a World: Portraits of Black Women Who Changed America. Former congresswomen Shirley Chisholm and Barbara Jordan and opera singer Leontyne Price were among the others included.

That same year, Liz Byrd began her term in the Wyoming Senate. She was the first African-American to serve in the state’s Senate. She retained her seat from 1989-1992.

Liz Byrd was the primary sponsor of the Martin Luther King holiday bill, bringing it before the Wyoming Legislature nine times. Her son said, “There were all kinds of political problems the Legislature faced as she repeatedly brought the bill back with more resolve each time. In the end there was a compromise to add ‘equality day,’ which she never liked, but did understand this was the closest the bill had ever gotten to becoming law and accepted the added language rather than lose the entire bill again.”

Longtime Carbon County Rep. Loren H. “Teense” Willford of Saratoga, a Republican, served in the House from 1987-2002 and on the Transportation and Highway committee with Byrd in 1987. Although their different political persuasions often put them on opposite sides of issues, he remembered her as “very conscientious and a very caring person” who “always voted for the best interests of her constituents.” He said that while he served in the Legislature, Byrd “never missed a vote.”

Willford had voted against the Martin Luther King bill, he said, not because of anything against Dr. King, but because he believed that such a state-recognized holiday should instead honor someone who had actually been in Wyoming—for example, Chief Washakie or frontiersman Jim Bridger.

In 1990, the holiday, which had been federally endorsed in 1976 but not observed nationally until the third Monday in January in 1986, earned recognition by Wyoming lawmakers, with the proviso that it be called “Martin Luther King, Jr./Wyoming Equality Day.” Martin Luther King Day was not observed in all states until 2000.

During her time in the Legislature, Byrd also worked for laws for adequate handicapped parking and for the creation of social services for adults, according to the UW alumni information.

She retired from Cheyenne’s Deming Elementary in 1996 after 37 years of teaching. Her husband died in 2005.

When her son James decided to run for office, he asked his mother about the processes she used to campaign. “I followed her advice, which I still use today and have run successful campaigns every time.” He began his service in the House in 2008 and said, “It would be impossible given the political climate of today to replicate her achievements. What I do embrace is the same set of social values and standards of excellence in my work.”

In 2012, the University of Wyoming honored Byrd as a Distinguished Alumna. The UW African American and Diaspora Studies department also created a speaker series named for her. The director of the department, Tracey O. Patton, said of Byrd in a press release, “She’s emblematic of what we all hope to accomplish in life. … She has made lives better in the state of Wyoming.”

Liz Byrd died on Jan. 27, 2015, at the age of 88. Gov. Matt Mead ordered that the state flag at the Capitol and throughout Laramie County be lowered to half-mast in her honor. He said, “She was a role model for all people, for women and for Wyoming.”

The Casper College Western History Center, located in the Goodstein Library at Casper College, 125 College Drive, in Casper, Wyo., contains an excellent collection of photo and archival materials on local and regional history. The center has an extensive collection of material connected to the cattle business in central Wyoming.