The Hyart Theatre is located in downtown Lovell, Big Horn County, Wyo. It is privately owned and has always been used as a theater. Built in 1950 and opened in 1951, the Hyart is important for Lovell for both its entertainment and architectural value. The designer and first owner was Hyrum “Hy” Bischoff. 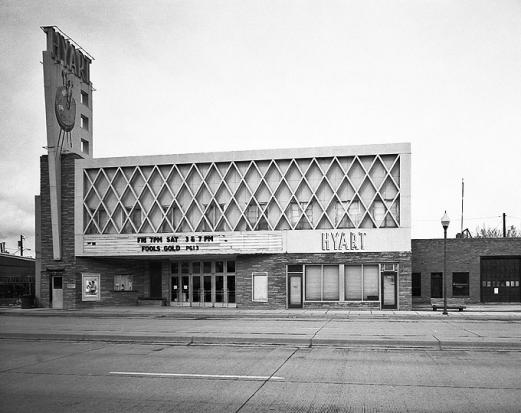 Hy Bischoff spared no expense when designing and constructing the theater. It was air conditioned and used the latest in motion-picture technology, including a curved screen to accommodate the CinemaScope movies, stereophonic sound and projection equipment. A popular magazine circulating during the time, Theatre Catalog, guided Bischoff in his design decisions. His finished creation was impressive, and the business became so successful that the Hyart was featured in the 1952 edition and received an award of merit from the publication.

Bischoff’s father, Dan, previously owned live entertainment theaters, and when he died in 1931, his son decided to continue in the theater business. Hy Bischoff operated the Hyart from 1951 until 1960, when his daughter, Loretta, took over. Hy died in 1988, and Loretta closed the theater in 1992.

Local residents later formed a nonprofit group, the Hyart Redevelopment Committee, to operate the theater again and reopened it on Nov. 13, 2004. In addition to showing movies on Friday and Saturday nights, there are Saturday matinees. Local talent shows and high school productions appear here as well.

Today, when guests enter the theatre, they stand in a 35-by-35-foot lobby with the original wood-and-glass concession stand, popcorn machine and ticket booth. From the lobby, visitors enter the auditorium. Two ramps, one on the left side and one on the right, are still covered with the original carpet. The auditorium contains the original red upholstered seats as provided by the American Seating Company. However, there are only 940 seats today. When the theater opened, there were 1,001 seats—a grand amount for the town, which had a population of just 2,000 at the time. Now, the theater and a storefront office on the east side are located on the first floor of the building. The storefront was first Andresen Jewelry and currently houses Bischoff Enterprises.

The lower portion of the façade is a unique type of “brick” called rhyolite, a “volcanic stone that was cut from a quarry in Idaho Falls, Idaho,” according to Nancy Weidel, author of the document nominating the Hyart to the National Register of Historic Places. Another unique feature is its sign, a neon-lit artist’s palette atop a pylon bearing the name HYART. The second floor is occupied by an office and apartment spaces. The exterior of the façade at the second floor is a latticework of pink and green sheet metal.

More history about ­­­the Bischoff family and the history of movies and theaters in Wyoming may be found in the nomination of the Hyart to the National Register of Historic Places. Nominations can be obtained online by searching the following website: http://wyoshpo.state.wy.us/NationalRegister/Search.aspx, or by contacting the Wyoming State Historic Preservation Office at (307) 777-7697.

The elegant Hyart Theatre in Lovell, Wyo., reopens after being closed for a dozen years.

More about Lovell at Wyoming Places

The Hyart Theatre is located at 251 E. Main St., Lovell, Wyo., on the north side of the road between Oregon Avenue and Nevada Avenue.