The Greybull Hotel, also known historically as the Carey Block, the Hurst Block and the site of the First State Bank, is located in downtown Greybull, Big Horn County, Wyo. In the past, the building was used for commercial operations—both private and professional: a specialty store, a hotel and a government post office. Today, the structure is used for commercial business and also as a hotel, and it is the location of a few private dwellings. Since it opened in 1916, the Greybull Hotel has been recognized for its importance to the community. Gagnon & Co., of Billings, Mont., built the hotel; the architect is unknown. There have been few changes in Greybull, an oil boom-and-bust town, since its peak period in the 1920s. This has helped the Greybull Hotel maintain its position as a prominent commercial downtown building to this day. 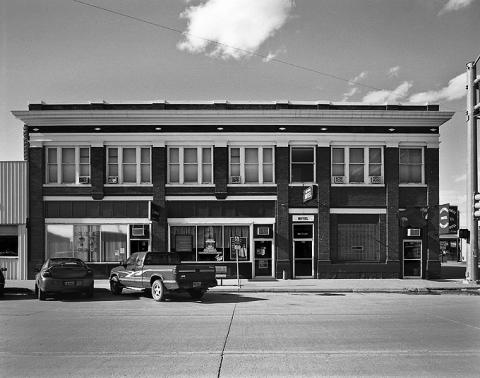 This building is the first and largest of its kind in downtown Greybull to be constructed of brick and concrete. Most other buildings in the town at the time were single-story, wooden structures. The use of concrete and brick instead of wood created a feeling of permanence for residents of this growing town.

James T. Hurst and A. S. Wyant chose this location because it was the “most important intersection in Greybull’s downtown commercial district,” according to Betsy Bradley, author of the document nominating the site for the National Register of Historic Places. The builders and investors wanted to make a statement about the town’s new commercial status during Greybull’s early oil boom, and this busy intersection was the place to make that statement. It’s still considered the most important corner in town at the intersection of Wyoming Highway 14 and Wyoming Highway 16/20.

The original occupant of the first floor of the building was the First State Bank, at the corner storefront. Two concrete vaults used by the bank remain in the building today. Next to this, to the west was a drugstore, and the third space along Greybull Avenue was a hardware and furniture store. To the north of the bank was the Greybull post office. On the second floor, a Dr. Gorder occupied a professional office space, while the remainder of the floor was hotel rooms, with hot and cold water provided to each. After the bank, like many others in 1920s Wyoming, failed in April 1927, Mott’s clothing store filled the space for several years. After that, Bob’s Bar became the long-term occupant. A small area of the basement, used as a speakeasy during owner J. J. “Joe” Carey’s rum-running days, retains its historic character. Joseph M. Carey, who served as Wyoming’s U.S. senator from 1890-1895 and the state’s governor from 1911-1915.)

Operating now as the Hotel Greybull, the hotel continues to rent rooms to travelers.

More history about the town of Greybull, the building’s history as well as that of the block where it’s located, including owners, occupants and the materials and construction techniques used, may be found in the nomination of the site to the National Historic Register. Nominations can be obtained online by searching the following website: http://wyoshpo.state.wy.us/NationalRegister/Search.aspx, or by contacting the Wyoming State Historic Preservation Office at (307) 777-7697.

More about Greybull at Wyoming Places