Area 2: Early Growth of the United States (1800-1850s)
Question: Why do peoples and societies explore, relocate, and settle frontiers?

In the 1840s and 1850s, pioneer traffic on the western trails swelled from a trickle to a flood. Gold-hungry prospectors took the trails to California. Land-hungry families headed for Oregon. Families fired by a new religion trekked to the new Mormon settlements in Utah. The main trail led through what are now Nebraska and Wyoming up the Platte, North Platte and Sweetwater rivers before dividing into many routes west of the Continental Divide.

By 1850, 50,000 emigrants were using the routes each year. The American Indian tribes in these areas watched in alarm, however, as the pioneers’ livestock ate up the grass and their presence drove off the buffalo and other game. Friction increased between tribes and travelers. The tribes complained to their government agents.

In 1850, Congress authorized a conference for all prairie tribes west and south of the Missouri River and north of Texas. The government’s goal was to win promises from the tribes not to bother the travelers and to cease making war on each other. In exchange, the government would promise to protect the tribes from attacks and harassment by whites, and would make substantial yearly payments for 50 years—in food and trade goods—to each tribe willing to sign a treaty.

Late in the summer of 1851, 10,000 American Indians gathered near the mouth of Horse Creek, 30 miles from Fort Laramie, just east of what is now the Wyoming-Nebraska border. Their camps stretched for miles. Representatives of the Lakota Sioux, Cheyenne, Arapaho and Crow tribes of the northern plains, and the Assiniboine and Arikara tribes of the upper Missouri River eventually signed the document.

Negotiations lasted several weeks. On hand was Father Pierre-Jean De Smet, a Jesuit Catholic missionary, well known among all the tribes, by government agents and by traders and interpreters. De Smet drew a map showing the territories in which, government officials now proposed, each of the tribes would more or less live out their lives.

The treaty made clear that tribes were free to travel and hunt where they pleased—as long as they were peaceful. At the same time, the treaty introduced what was most likely a foreign idea to the tribes involved—that land could be exclusively “owned” by a person or a group of people. That non-traditional concept continues to this day. Many of the tribes, after their final military defeat decades later, were assigned to reservations far smaller than the areas De Smet first drew on the map in 1851.

Though the treaty was a serious attempt by the tribes and the U.S. government to coexist peacefully, it was not successful. War broke out three years later and lasted, intermittently, for more than 35 years.

Understanding why Father De Smet drew the map, and comparing it with a map of the location of American Indian reservations in the same areas today will allow students to explore questions of how and why frontiers exist, and the consequences of peoples’ decisions to cross them.

The article linked below, “Separate Lands for Separate Tribes,” offers substantial background on the topic for teachers and for students 8th grade and up. Exercise 7 asks that students read the article before writing a brief essay. The article may be demanding for 6th and 7th graders. 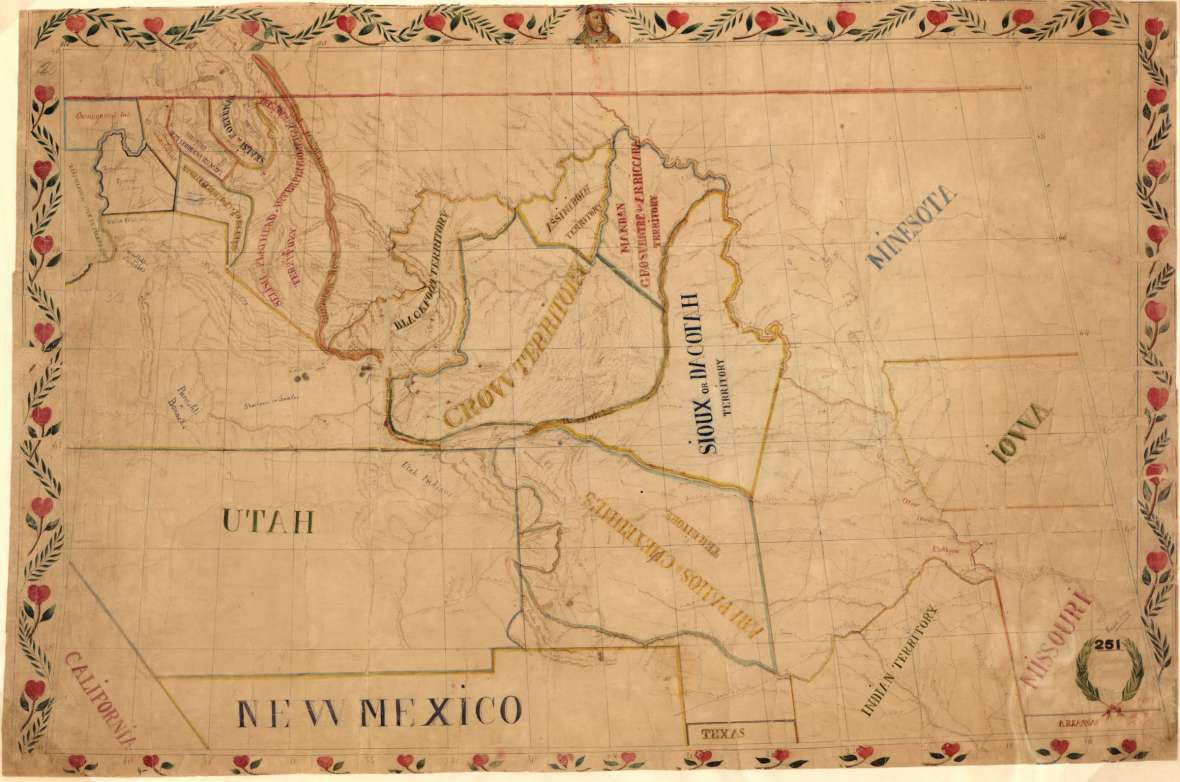 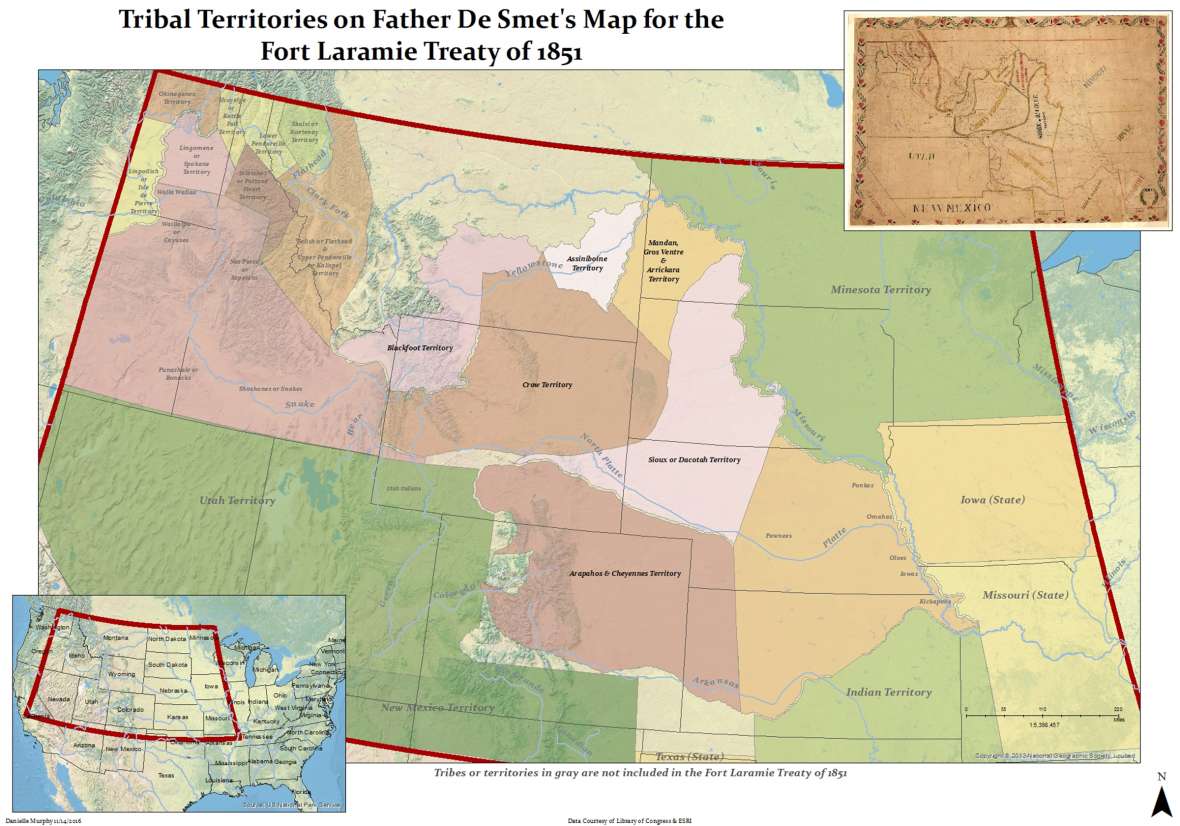 3. Examine carefully Danielle Murphy’s map, “Current United States Reservation Locations,” which shows the locations of Indian reservations today that lie within the tribal areas originally outlined in the Fort Laramie Treaty of 1851, together with the text of the treaty itself. Article 5 gives geographical descriptions of the tribal areas. 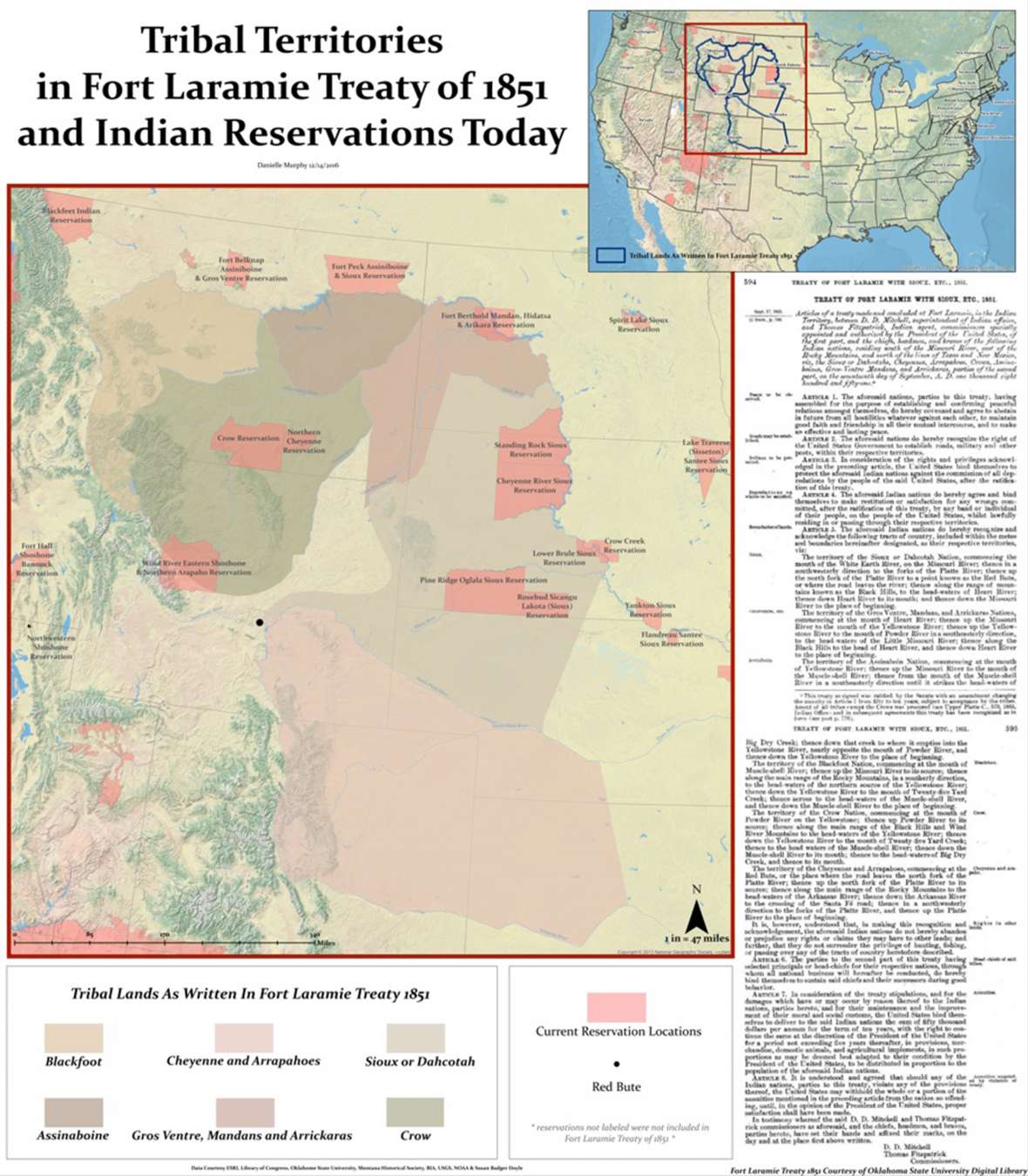 5.Carefully read the “Treaty of Fort Laramie with the Sioux, etc., 1851, at https://dc.library.okstate.edu/digital/collection/kapplers/id/26435.

7. For more background and details of the events surrounding the signing of the treaty and its outcomes, read Lesley Wischmann’s essay, “Separate Lands for Separate Tribes: the Horse Creek Treaty of 1851,” at http://www.wyohistory.org/essays/horse-creek-treaty.

Draft, write and polish a 250-300 word essay on one of these questions: