The Buxton Case: An Anti-Immigrant Tragedy

The Buxton Case: An Anti-Immigrant Tragedy

Legislation aimed at immigrants may have contributed to the murder of the first Wyoming game warden killed in the line of duty.

In 1899, nine years after Wyoming became a state, the legislature created the office of the state game warden. Slowly but steadily over the following years, policies and procedures for the protection and management of Wyoming’s wildlife were created and compiled. 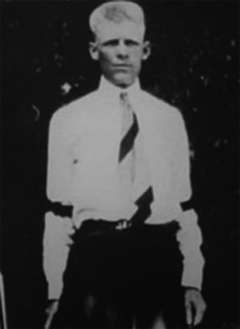 By 1919, there were 14 pages of Wyoming state law on the books addressing hunting and fishing, including definitions of game animals and game fish, purchase of feed for game animals, establishment of hunting seasons, beaver trapping and salaries of assistant game wardens and deputy game wardens.

Among those deputy game wardens was John J. Buxton, born in Cincinnati, Iowa, in 1888 and a resident of Rock Springs since 1910. Following a short hitch in the U.S. Army during World War I, Buxton was discharged after the Armistice and appointed a deputy game warden not long afterward.

As described in one newspaper account, on September 14, 1919, Buxton, accompanied by his pregnant wife, Jennie, and his “little son,” was traveling in his car to Rock Springs from the coal camp at East Plane when he encountered Joseph Omeyc, a 17-year-old Austrian immigrant living with his family in Rock Springs, and his companion, John Kolman, 16, also of Rock Springs. The boys were out “shooting rabbits” north of the Union Pacific’s Number 8 coal mine.

Omeyc was carrying a rifle, a Savage .30-30. According to the account, Buxton “saw the boys and went up to them and took Omeyc’s gun from him, stating that he had no license and would have to accompany him to town.” Omeyc then drew a .38-caliber revolver and shot Buxton. Dr. Edward Lauzer later testified that the bullet “had entered a little to the right of the sternal [that is, the sternum], the lower end of the sternal, directly back of the right lung and it fractured the sixth rib and lodged under the skin.”

Kolman later gave the coroner’s jury a slightly different version of events, saying that Buxton “came in the back of [Omeyc] and grabbed the gun and said ‘This is a pretty good gun for me and I just need one.’ The kid got pretty sore and pulled the [pistol] out” and after a few moments, shot the deputy warden.

Buxton was driven to the hospital in Rock Springs, where he was declared dead. Later that day, Omeyc was found hiding in a coal car on a rail spur near the Number 8 mine and arrested by Sweetwater County Sheriff John Stoddard. He was charged with first-degree murder.

It is natural to assume that Buxton seized Omeyc’s rifle because he was hunting out of season, but in fact this may not have been the case. Documents recently uncovered by the Sweetwater County Historical Museum in Green River, Wyo., and a review of Wyoming’s 1915 and 1919 game and fish laws in support instead a scenario wherein Buxton was acting within a state statute that prohibited non-citizens from possessing firearms or even fishing gear unless they had a special license.

First is the question of hunting out of season. Omeyc and Kolman were out shooting rabbits, which, in 1919, were not classified as game animals in Wyoming. At that time, game animals and fish were defined in state statue as “any elk, deer, mountain sheep, wild goats, antelope, moose, trout, grayling, or bass within the state,” with no mention of rabbits at all under the statutes’ Section 55, “Game and Fish.” While hunting seasons for species of game like deer and elk were clearly laid out, there were none for rabbits, which were unregulated. 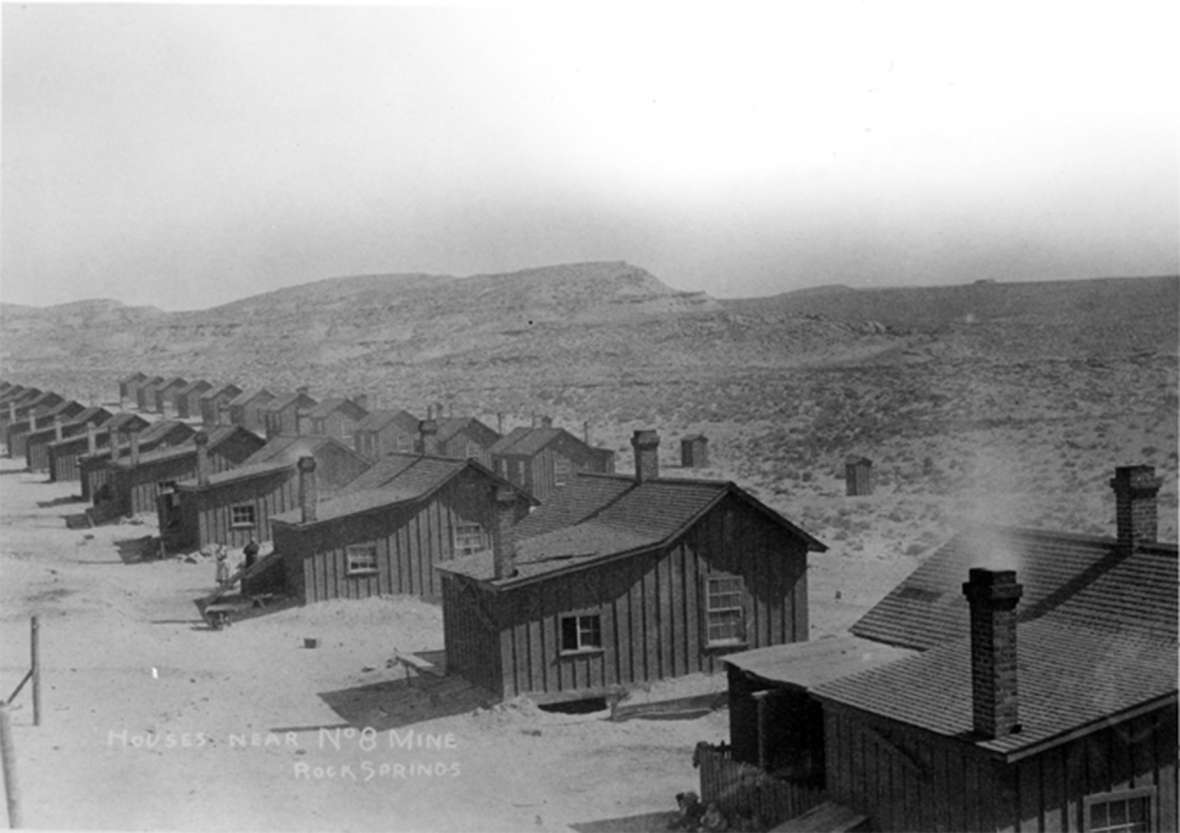 Next is the license issue. Normally in a situation like the Buxton-Omeyc case, Omeyc’s not having a “license” would seem to refer to a hunting license, but the transcript of John Kolman’s testimony at the Sweetwater County Coroner’s inquest into Buxton’s death implies another type of license.

A: No, he just got his first papers.”

These passages, with their focus on the need for possession of a license contingent on citizenship, appear puzzling until we consider Wyoming law in effect at the time. Passed by the Wyoming Legislature in 1915, Section 13 of “Game and Fish Law” in Wyoming statute reads, in part, as follows:

“Alien’s Gun and Fish License. — There is hereby created a special gun and fish license for aliens. No person, not a bona fide citizen of the United States shall own or have in his possession, in the State of Wyoming, any gun, pistol or other firearm, or any fishing tackle, without first having obtained the specified license therefor, which such special gun and fish license shall cost the owner the sum of twenty-five dollars and shall expire on December 31st of each year after date of issuance thereof.”

Section 13 goes on to declare that:

“Any alien of the United States who shall have in his possession or under his control any gun, pistol or other firearm, or any fishing tackle, without having taken out and being at the time in possession of a license as herein provided, shall be deemed guilty of a misdemeanor and shall be punished by a fine of not less than twenty-five dollars nor more than one hundred dollars; and in the event that such fine and costs are not paid, shall be imprisoned in the county jail until such fine and costs are paid at the rate of one dollar a day. 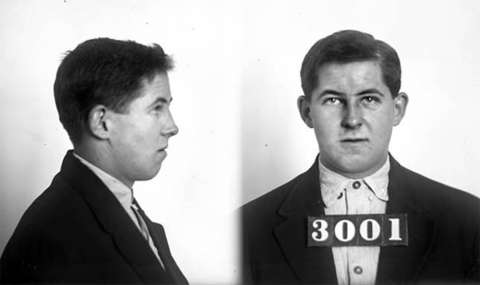 “It shall be the duty of the State Game Warden, his assistants, and deputies, and all other peace officers in the State of Wyoming, to search for and take into their possession any gun, pistol, or other firearms or fishing tackle found in the possession of any alien not entitled to hold or possess the same, and to sell the same, destroy or otherwise dispose of the same upon order of any Justice of the Peace, any District Court of the State of Wyoming, or a judge or District Court Commissioner thereof.”

Early in 1919, with Section 21, the Legislature stiffened the already-repressive Section 13 by removing the exceptions for aliens who were “bona fide residents of Wyoming,” “bona fide freeholders,” or those paying taxes in excess of $100.

What state of affairs made it a crime for non-citizens to possess so much as a fly reel without a license? The answer may be in what is often termed the First Red Scare.

The years following the end of World War I were tumultuous. More than 116,000 Americans had lost their lives in the conflict, embittering many against Europe and European immigrants.

In 1919, after two years of wartime price controls, workers across the country seeking higher wages went on strike. Four million men and women—one fifth of the nation’s work force—walked out. Two years earlier, in 1917, Lenin and the Bolsheviks had overthrown the Russian government and murdered Czar Nicholas II and his family. The belief gained ground that Bolsheviks bent on revolution here in the United States were behind the strikes. 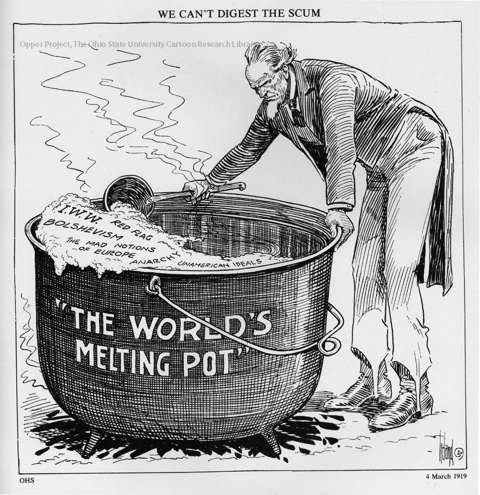 The acts of anarchists and communists, (both actual and imagined), many of whom were European-born, spread fear and bred anti-immigrant paranoia on a wide scale and triggered the Red Scare of 1919-1920.

Some of the trouble was real enough. In April 1919, anarchists mailed dozens of bombs to top-level politicians, government officials and businessmen all over the country, including John D. Rockefeller, Attorney General A. Mitchell Palmer and Oliver Wendell Holmes, an associate justice of the United States Supreme Court. In June, anarchists set off bombs in eight American cities. None of the those targeted were killed, though several people were badly wounded.

In the wake of the bombings, the U.S. attorney general and the Department of Justice launched what came to be called the “Palmer Raids,” mass roundups and arrests carried out by federal agents. They targeted suspected communists and anarchists, in particular Italian and east European immigrants, both Jewish and non-Jewish, and immigrant leftist labor advocates. Thousands of arrests resulted, and 556 resident aliens were eventually deported, most often for political beliefs, associations and memberships rather than actual acts. The harsh tactics of the Palmer Raids led to the formation of the American Civil Liberties Union (ACLU), in January 1920.

In June 1920, Massachusetts District Court Judge George Anderson ordered the release of nearly 20 of the arrested aliens and denounced the Department of Justice's actions, writing that "A mob is a mob, whether made up of Government officials acting under instructions from the Department of Justice, or of criminals and loafers and the vicious classes."

Joseph Omeyc pleaded guilty to second-degree murder in District Court in Green River on March 17, 1920, and was sentenced to 20 to 21 years at the state penitentiary at Rawlins. Paroled in 1924, he violated his parole and disappeared. According to state Board of Charities and Reform records for the Wyoming State Penitentiary, he was never apprehended.­

On Feb. 1, 1935, the State Legislature approved a bill awarding $5,000 to “June Buxton and Jacqueline Buxton, minor daughters of John Buxton, deceased, who was killed in line of duty as Deputy Game Warden of the State of Wyoming, on September 14, 1919," in compensation for their father’s death.

Nothing that happened that day in September 1919 could justify the murder of Deputy Game Warden John Buxton, but bad laws tend to foster bad consequences, not least when they’re directed against people based on political beliefs, ethnicity or national origin. There was no rationale for Section 13 and Section 21 of the game statutes; they addressed no wildlife management needs or issues. A product of the paranoia of the time, they were blows aimed squarely at non-citizens and nothing more. By 1921 both were gone, repealed by the same state Legislature that passed them.

The Rock Springs Historical Museum is the former town hall and jail, built in 1892, and is located in downtown Rock Springs at 201 B St. From I-80, take the Elk Street exit, No. 104, and follow Elk Street south to downtown. Take the bridge across the U.P. Railroad tracks where it turns into A Street. At the end of the bridge, take a left on Broadway. The museum is on the right at the corner of Broadway and B. Hours are Monday through Saturday from 10 a.m. to 5 p.m. The museum includes a bookstore and gift shop and also offers an interesting walking tour. Admission is free but donations are accepted.