Alonzo Stepp grew up in Kentucky, where he pursued a classical education. A trip to Wyoming with a friend when he was 19 convinced him to follow his true passion: ranching in the West. Although Stepp’s story mirrors that of many men and women who sought and achieved their dreams in Wyoming, his success is remarkable. He not only overcame the obstacles inherent in that hardscrabble pursuit of raising and selling livestock, but Alonzo Stepp—the son of two people who formerly had been enslaved—triumphed in an era and a region where few blacks could claim such achievement. 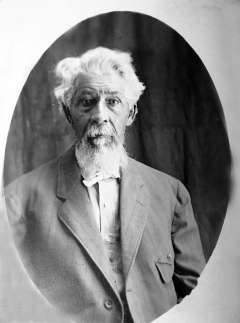 According to historian and former University of Wyoming professor Jack Ravage, “Alonzo ‘Lon’ Stepp broke about every stereotype that we have formed about black men in the west … or anywhere else, for that matter.”

The exact acreage of the ranch he built is unclear, but records show that the Stepps, who began their Wyoming homestead with about 60 acres in 1900, owned at least 1,700 acres by the 1930s. For many years, members of the Stepp family ranched successfully along Fontenelle Creek, about 90 miles north of Rock Springs, but the physical remnants of their ranch were lost, along with those of many others, when the area was flooded in the 1950s to create the Fontenelle Reservoir. Today, many descendants of Lon Stepp continue to live in the area.

Historians attribute his success not only to a strong character, but to lessons learned in his early years. These came through education and his strong community of faith, both interracial, as well as the support he received from the whites he befriended and the U. S. government.

Alonzo Theodore Stepp was born Sept. 20, 1874, in Berea, Ky., to Archie and Anne Stepp. Her maiden name is listed as Blythe in some sources and as Moore in others. Lon’s brother, Willard, was born in Madison County, Ky., on March 31, 1878. Their sister, America, lived a  long life and gave birth to four children, Paul McGaughey, Maxine McGaughey, Kenneth Alonzo McGaughey and Merle McGaughey, Jr.  Kentucky birth records for 1878 list the Stepps as “black,” but the federal 1880 census lists Stepp’s family as “mulatto.”

Lon attended the Berea College educational system, which students attended from the elementary grades through college His courses included the “Christian tradition,” as well as the regular classroom fare of his day: mathematics, history, American government, composition and rhetoric, Latin and Greek. There, he formed a friendship with Howard Embree, a white student, who invited Lon to work with him during the summer of 1893 on his sister’s and brother-in-law’s Wyoming cattle and sheep ranch. 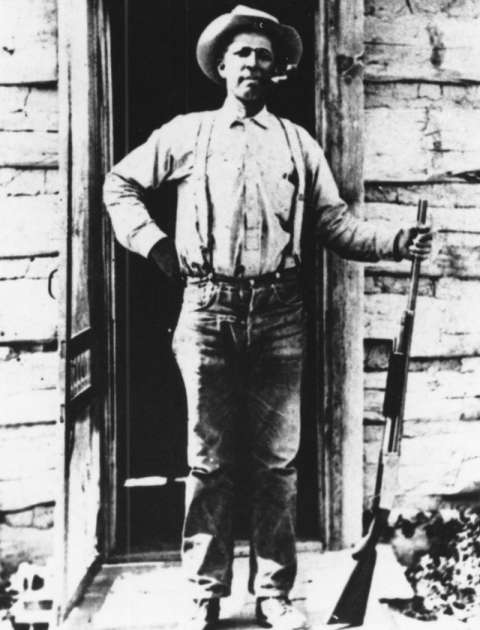 This was the Rathbun ranch near Fontenelle Creek. Stepp enjoyed the work so much and became so good at it that he eventually became Charlie Rathbun’s top hand. Rathbun helped Stepp get his own start in the ranching business by assisting him in obtaining livestock and money, but this took about three years.

And Lon had met someone else in Berea with whom he wanted to share this life: Esther Jane Yates, daughter of Harrison Yates, (listed in some sources as Horace Yates), who had served as a lieutenant in the Union Army. Stepp returned to Kentucky, where he married Esther in 1894. Their first three children were born there: Helen McGaughey Stepp, born in 1894; John Fee Stepp in 1896; and William Gary Stepp in 1898.

But Lon wanted to return to Wyoming, and he brought his family to Opal in western Wyoming in 1898, working as a barber there and on the Rathbun ranch until he also could afford to help his parents come west. The 1900 census listed his occupation as sheepherder. That spring, Lon’s parents, who had successfully farmed near Berea, came to Wyoming, where they built a 14-by-16-foot log house and started with 60 acres; the homestead was deeded to them seven years later, by which time the acreage had nearly tripled. They had also filed a Desert Land claim for about 70 acres, which was deeded to them in 1908. Lon Stepp withdrew from the property in January 1910, but the reason is unclear.

In 1910, the Stepps suffered a drastic loss when their storehouse burned down, cause unknown. The June 22 Kemmerer Camera reported, “Lon Stepp and Mr. Hamp, who are located just below Fontenelle arrived in town on Monday, and not long after their arrival Mr. Stepp received a telephone message stating that his store house which was well stocked with provisions, had burned down after his departure from home, although no particulars were received as to the origin of the fire. Anyone who is familiar with what a ranch store house is, will know that this will prove quite a loss considering what the price of provisions of all kinds is just now.” 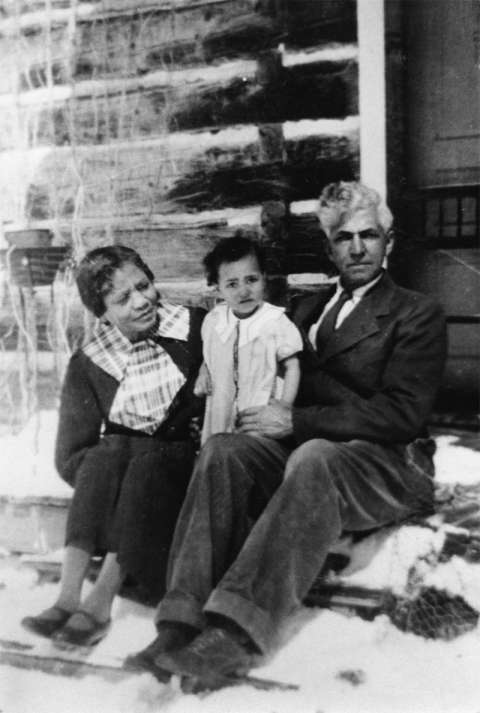 On Aug. 12, 1914,the Kemmerer Camera complimented his road maintenance expertise: “Lon Stepp, road supervisor for the LaBarge and Fontenelle road district, was in town last week on business. Mr. Stepp has had under his supervision the building of about eight or nine miles of road on the way to Big Piney, and all references we have heard to it by those who travel that way, is that it is excellent work and has been well handled. Mr. Stepp is a candidate for nomination at the primaries next week, and it is probable that the electors of that district will show their appreciation of his excellent work, because good road supervisors are not always available.”

During these years, thrift was necessary, and Lon traveled fifteen miles on horseback to the Rathbun ranch to work for pay. These journeys no doubt made him familiar with the roads and places that required repair.

The Stepp ranch was a stage stop for travelers heading from southwest Wyoming to Jackson, and the Stepps sometimes hosted schoolteachers who taught in local one-room schools. Lon valued education and wanted his children to be well educated. He built the Stepp-Olson schoolhouse, halfway between the Stepp and Churndash ranches. His sons John and Bill completed eighth grade in the one-room log schoolhouse, and Dutch graduated from the high school in nearby Kemmerer. Daughter Helen spent one summer living with the J.C. Penney family in Kemmerer, where she experienced not only the hospitality of the Penneys, but town life.

In April 1914, the Stepp school closed, and the Kemmerer Camera reported that the teacher, Mabelle Booth, “expects to spend some time visiting on Fontenelle before she returns to her home. Miss Booth is from Indiana, but regrets leaving Wyoming and her new made friends. However we hope to have her with us again next winter, if not as teacher as a welcome member of the community.” 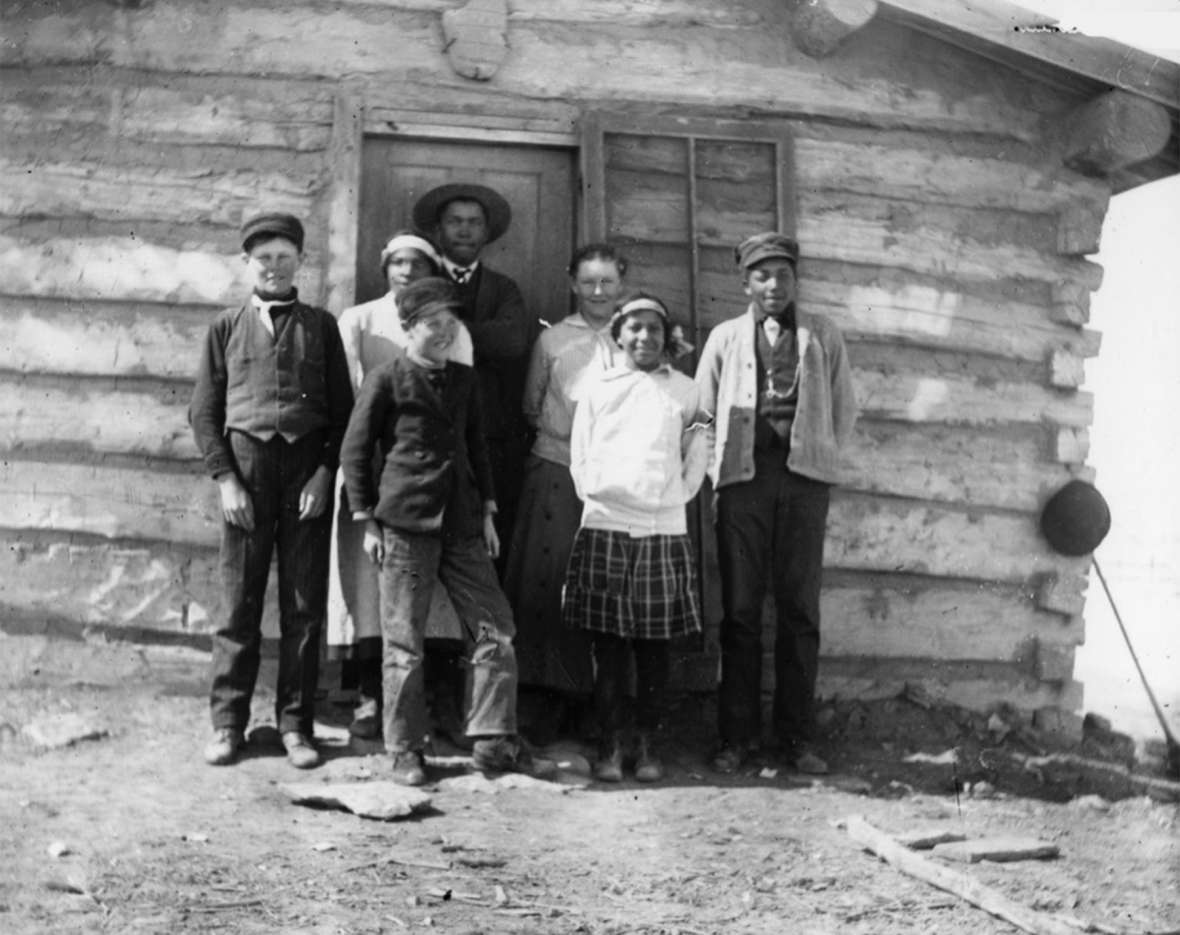 On Aug. 20, 1919, the Kemmerer Camera noted Lon Stepp’s land purchase, explaining, “Dan Robertson has sold his ranch on Green River to Lon Stepp. Fontenelle regrets losing Mr. and Mrs. Robertson, but congratulates Mr. Stepp on his wise choice. No prettier home can be found in the West than Mr. Robertson has made, not to mention the value of the ranch. The home is completely surrounded by beautiful trees and the yard is always clean and green while Mrs. Robertson’s flowers were the envy of all who saw them. They have not decided just where they will locate but the wishes of all Fontenelle go with them.”

By the 1920s, Stepp family members were well known around the state for their musical talents as well as the prosperous cattle ranch they had built. According to historian Scotty Utz, who researched the family for a University of Wyoming class project, “[T]he Stepp family experienced very little in the way of racism in Wyoming. Various family members from numerous interviews maintain that they have been treated ‘just like everybody else.’”

Throughout the years, Lon supplemented his ranching with other jobs. In addition to maintaining roads, he “rode shotgun” on the stagecoach, served as deputy assessor, as a brand inspector and as Fontenelle postmaster. His postmaster term began Sept. 3, 1920, ending with his death on Dec. 15, 1941. He had suffered from ill health for several months. Esther died only four months after Lon. Their son Bill was postmaster for a short time before the post office closed in 1942. 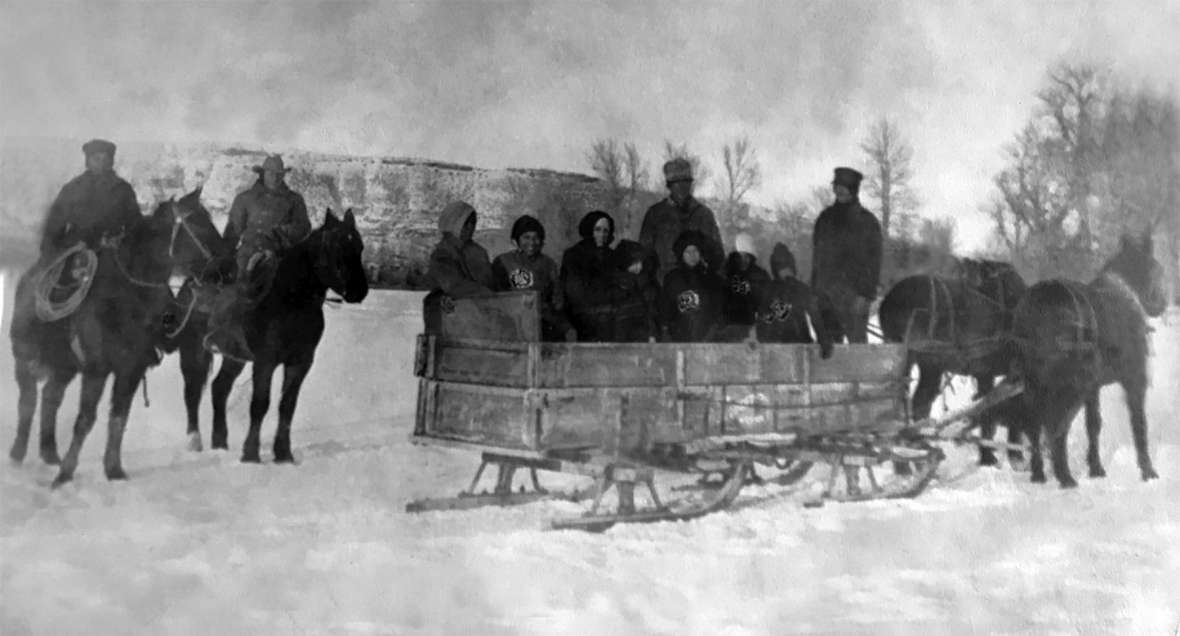 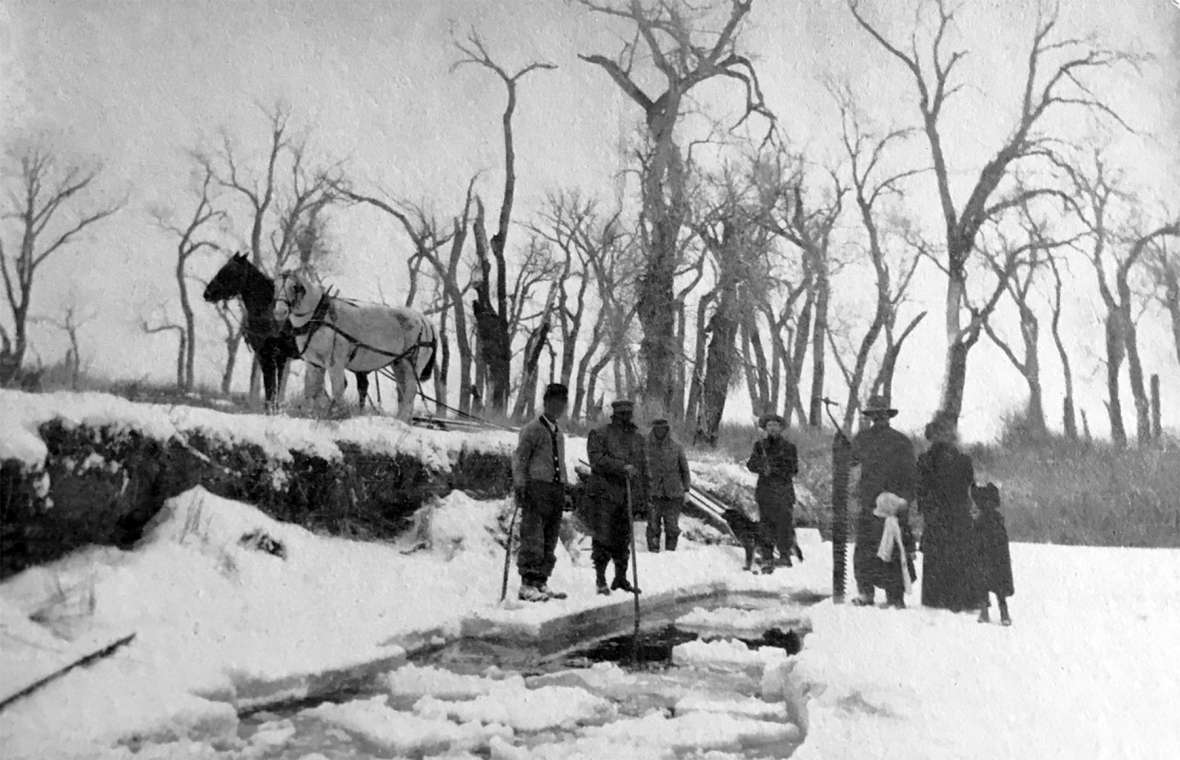 In the 1950s, Bill also served on the board of the Wyoming Stock Growers Association, the only black member on that board. Also in the 1950s, John, Bill, and Dutch Stepp formed a band, including their friend, saxophonist Ralph Armstrong, and performed throughout western Wyoming. They also broke horses—taming the animals to be ridden and used for ranch work—for others. The brothers helped found the LaBarge Bible Church, which later became the Fellowship Baptist Church.

In the 1950s, Wyoming Sen. Gale McGee advocated for a reclamation project for the western Wyoming region: a dam to store irrigation water and help provide cheaper electricity. Officials chose a site between LaBarge and Fontenelle along the Green River. By 1963, the U.S. government claimed the Stepp land by eminent domain, as well as the land owned by many others in the area, and Fontenelle Reservoir flooded the place where the Stepps’ homestead had been.

Many Stepps still live in the area, however. They are a close family and many are community leaders in the Green River Valley, serving on boards and commissions and one, in 2019, as mayor of LaBarge, Wyo.

Eleanor Stepp Johnston, daughter of Dutch Stepp and granddaughter of Lon, was a small girl when her grandfather died. She lives near La Barge and sees her many grandchildren and great-grandchildren frequently. She says the Stepp family has never felt any racial prejudice, not in the area and not in the state, and adds that this is apparent in the friends they’ve had and the offices they’ve held. 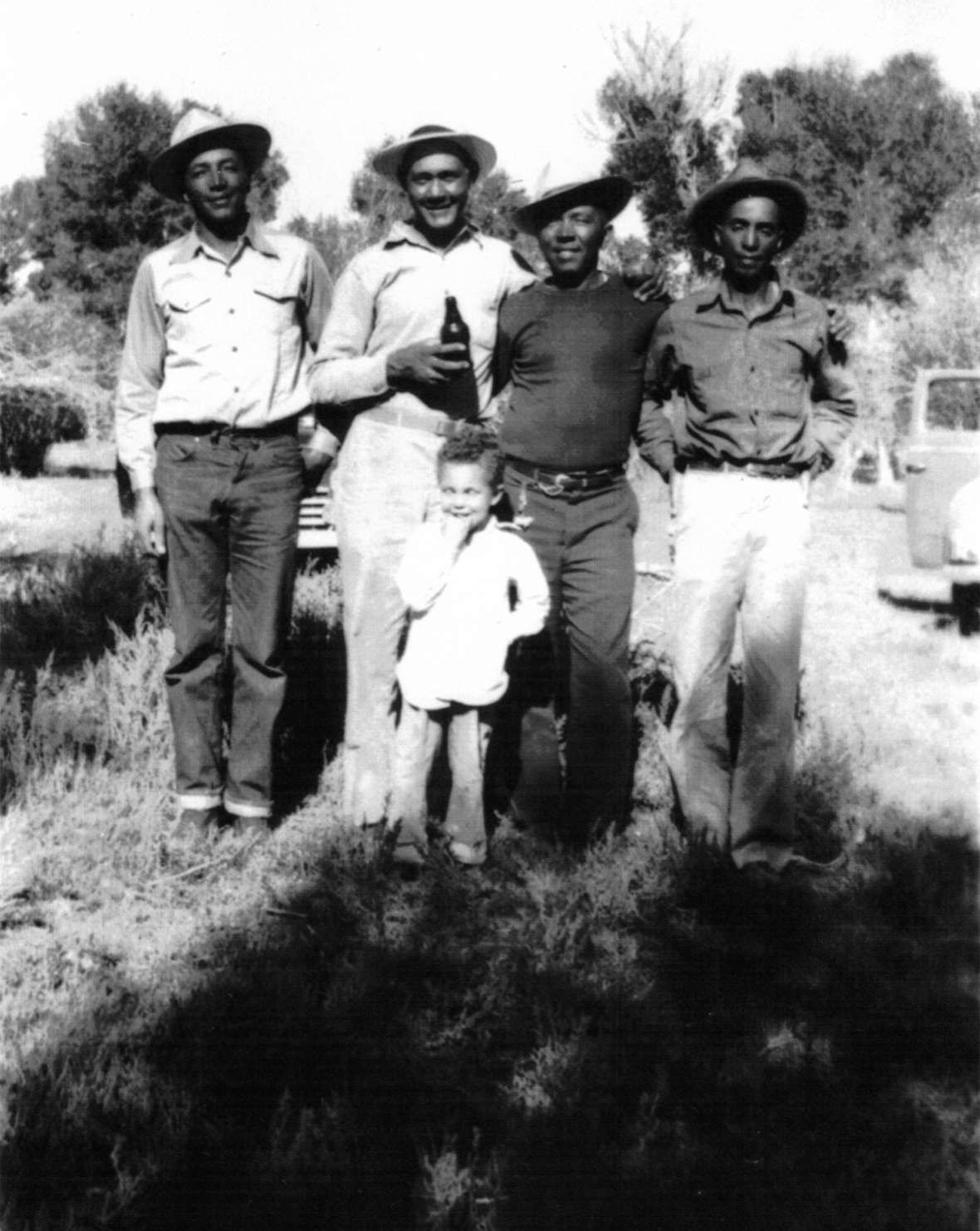 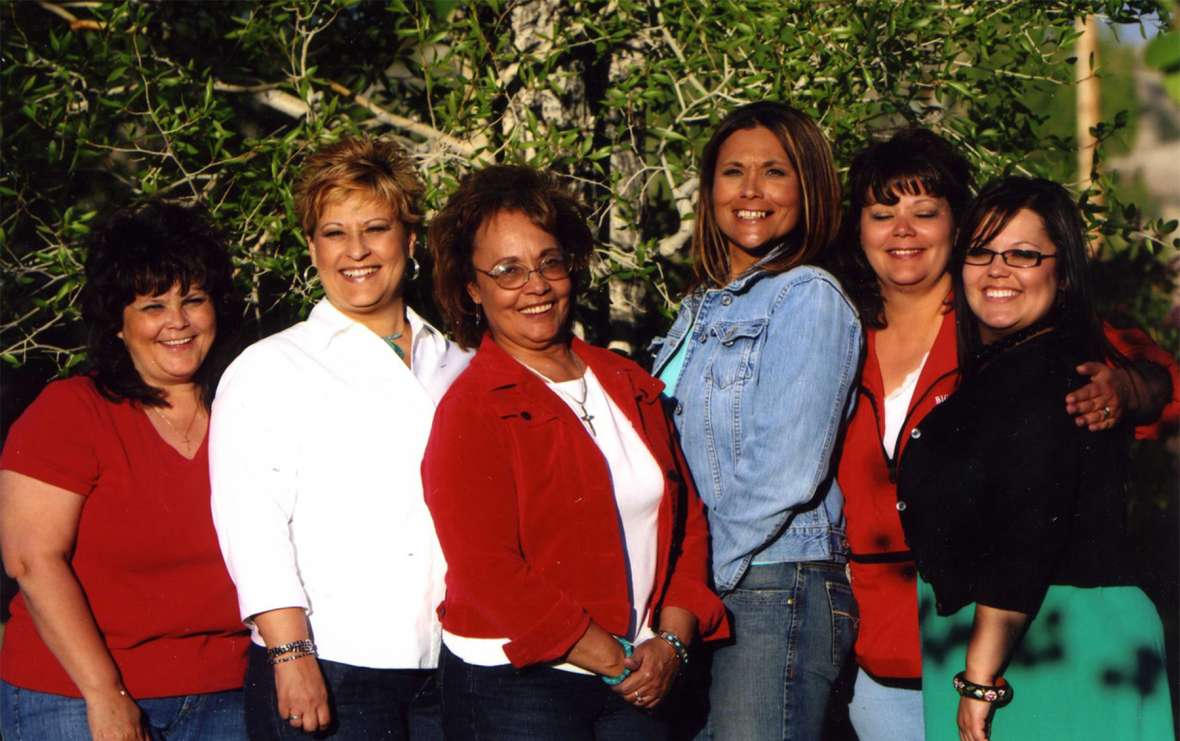 The photo of Alonzo Stepp standing in front of a doorway is from the American Heritage Center at the University of Wyoming. Used with permission and thanks. The rest of the photos are used by permission of the Stepp family, with special thanks to Eleanor Stepp Johnston of La Barge, Wyo. 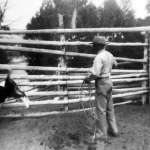 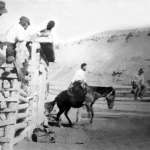 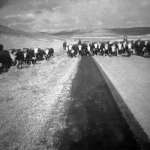 Jonita Sommers was born, raised and lives on the Sommers Ranch south of Pinedale, Wyo. She is a retired school teacher and local historian.

The Fontenelle Dam on the Green River, 24 miles south of LaBarge, Wyo., was built in the early 1960s. When full, Fontenelle Reservoir, impounded by the dam stretches 20 miles upstream. It contains cutthroat, brown and rainbow trout. Recreation at the site is managed by the U.S. Bureau of Land Management in cooperation with the U.S. Bureau of reclamation. For more on the construction history and subsequent safety problems at the dam, visit the site linked above. For camping and recreation information, click here or call 307-352-0256 or 307- 828-4500.