Jim Bridger's Map and Euro-American Settlement of the West

Jim Bridger's Map and Euro-American Settlement of the West

Area 5:  Westward Expansion and the United States (1840s-1890s)
Question:  How did expanding westward affect tensions within different regions of the U.S.?

In the summer of 1862, the famous mountain man Jim Bridger guided Col. William Collins and a small detachment of troops from Platte Bridge Station, at present Casper, Wyo., west up the Oregon Trail to South Pass, around the west side of the Wind River Mountains, then back east over Union Pass to link up with the Oregon Trail and back to the army post where they began.

Bridger by then was in his late 50s, nearing the end of a long career trapping beaver throughout the Rocky Mountains, later running a prosperous trading post catering to covered-wagon pioneers and, most recently, guiding U.S. Army expeditions exploring the northern Rockies and plains. He was thus well known in army circles, among old-time trappers and traders and among American Indian tribes, especially the Shoshone. He had lived at different times with three different wives—one Flathead, one Ute and one Shoshone—and probably knew tribal languages as well as English, French and Spanish.

Beginning in 1849, Bridger guided army exploring expeditions under Lt. Howard Stansbury to Great Salt Lake in 1849-50; under Lt. G.K. Warren to the Black Hills of Dakota and the Yellowstone River in 1856; under Capt. William Raynolds in 1859-1860 to the Powder River country in present-day northeastern Wyoming and under a civilian  surveyor, Edward Berthoud, in 1861 to passes in the Colorado Rockies.

Immediately after the Civil War ended in 1865, the Army resumed its pursuit of the Cheyenne, Lakota Sioux and Arapaho tribes. Officers relied heavily on the reports of the Warren and Raynolds expeditions for reliable geographical information. Bridger’s vast geographical knowledge, via the expeditions he guided and the reports their officers wrote, was thus put to use to help subdue Indian people as more and more Euro-Americans came into the West.

In 1862, meanwhile, according to at least one account, Bridger, while on his trip with Collins to South Pass, drew a map of the West in the dirt. The country mapped runs  north from South Park, Colorado to the Yellowstone River of Montana, and west from the forks of the Platte in present Nebraska to the headwaters of the Green River—meaning that it includes nearly all of present-day Wyoming, and much more.

This map eventually was transferred to paper in great detail by Col. Collins’ 17-year-old son, Caspar Collins, who accompanied his father on the 1862 trip as a draftsman and later was commissioned an officer. Caspar Collins’s re-drawing of Bridger’s map has survived in the collections of the American Heritage Center at the University of Wyoming. It gives us a look at how Bridger—who may well have had the widest, most detailed knowledge of anyone at the time of the geography and topography of what’s now Wyoming—kept that knowledge in his head.

The map also allows us to consider how Bridger’s knowledge was put to political use, that is, to aid in the eventual conquest, by Euro-American people and cultures, of the tribes that already lived here.

The article linked below, “A Map of the West in his Head: Jim Bridger, Guide to Plains and Mountains” offers substantial background on the topic for teachers and for students 8th grade and up. The article may be demanding for 6th and 7th graders.

Read "A Map of the West in His Head: Jim Bridger, Guide to Plains and Mountains"

Carefully read “A Map of the West in His Head: Jim Bridger, Guide to Plains and Mountains,”  by James Lowe on WyoHistory.org at http://www.wyohistory.org/encyclopedia/jim-bridger. 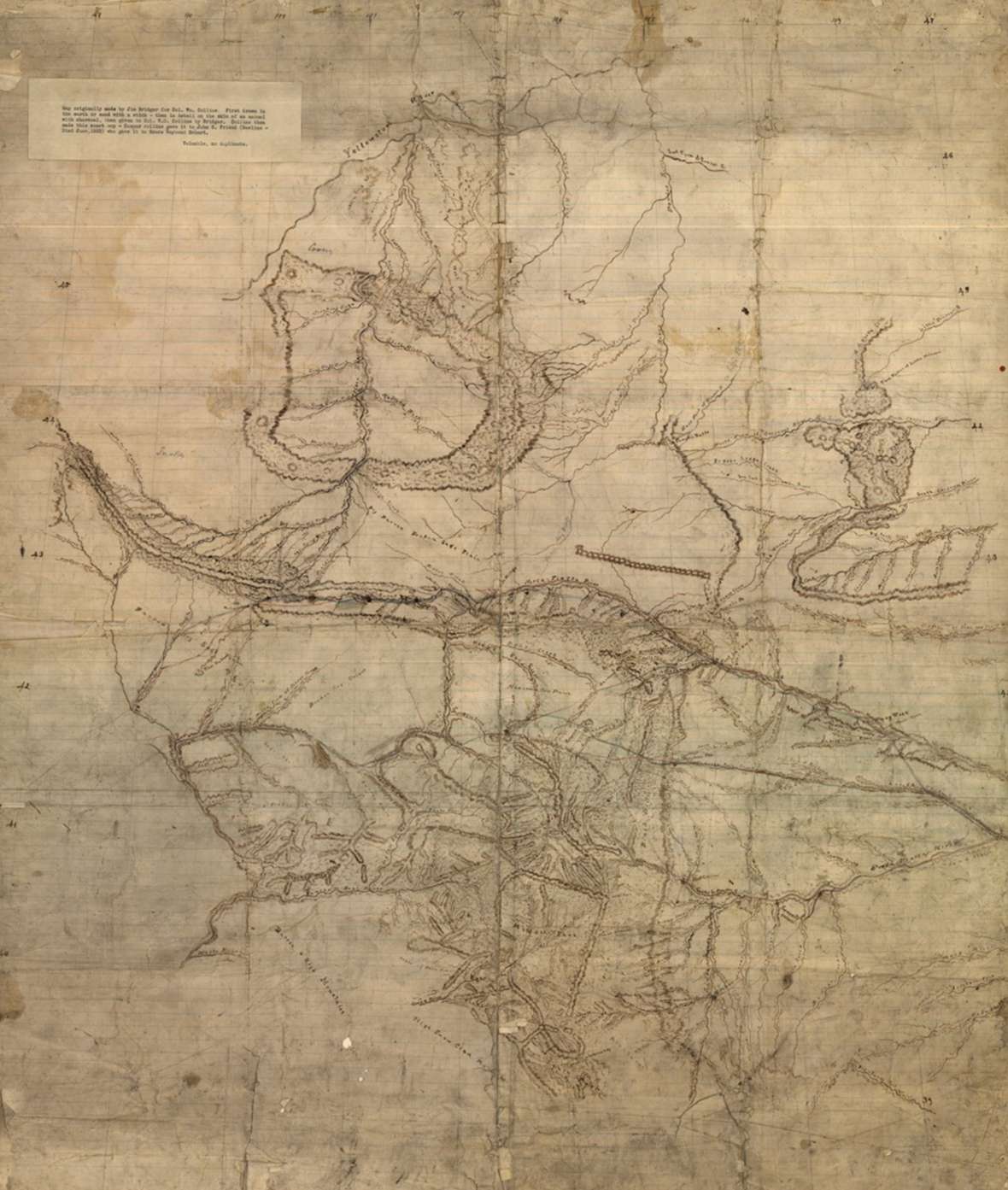 2. Examine carefully the map by Troy Campbell that overlays the Bridger map with a modern map of the topography of the same area. 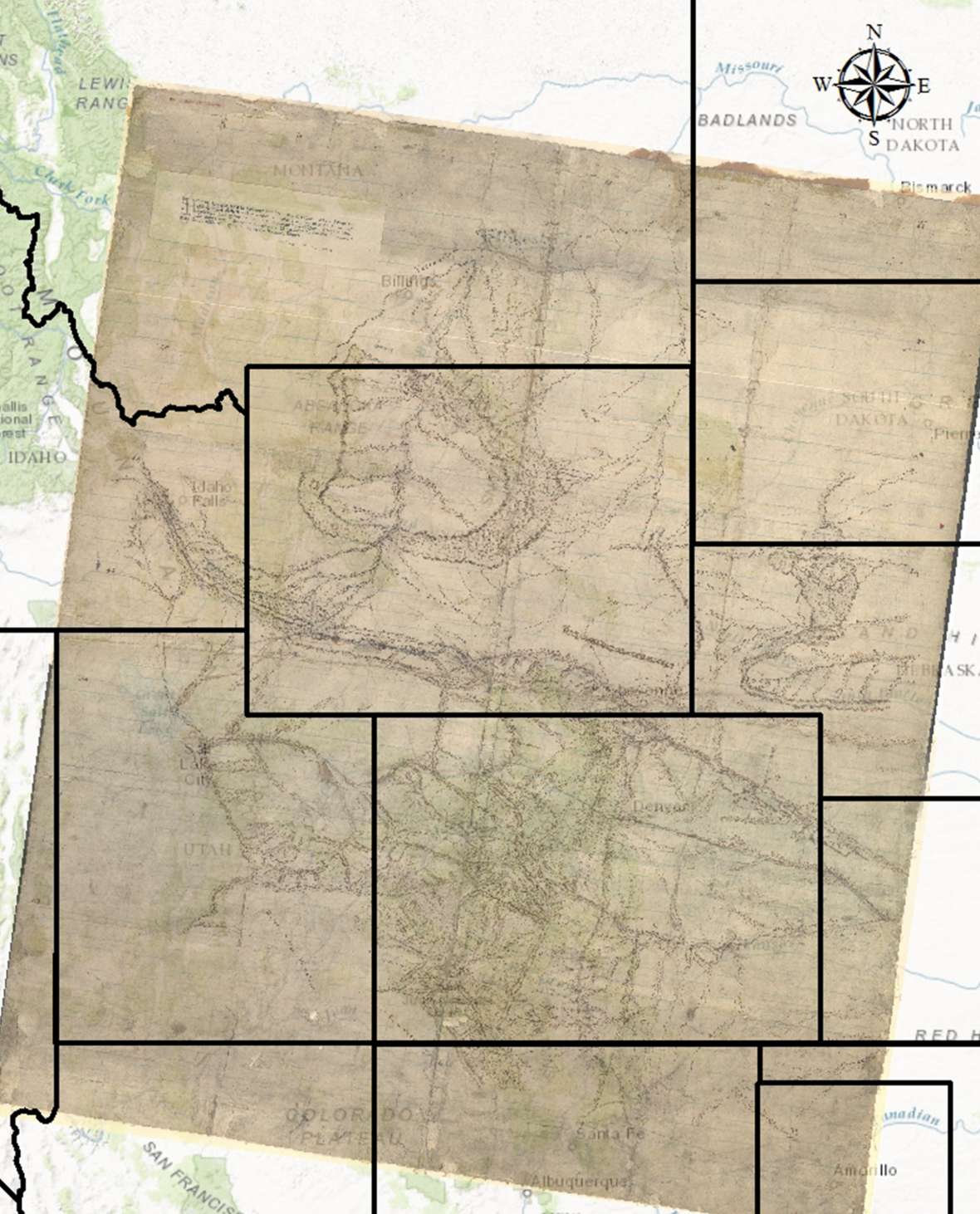 3.Examine carefully the map by Troy Campbell, “Bridger’s Historic Trails,” which shows the routes of Army expeditions guided by Jim Bridger in the northern Rockies and plains. 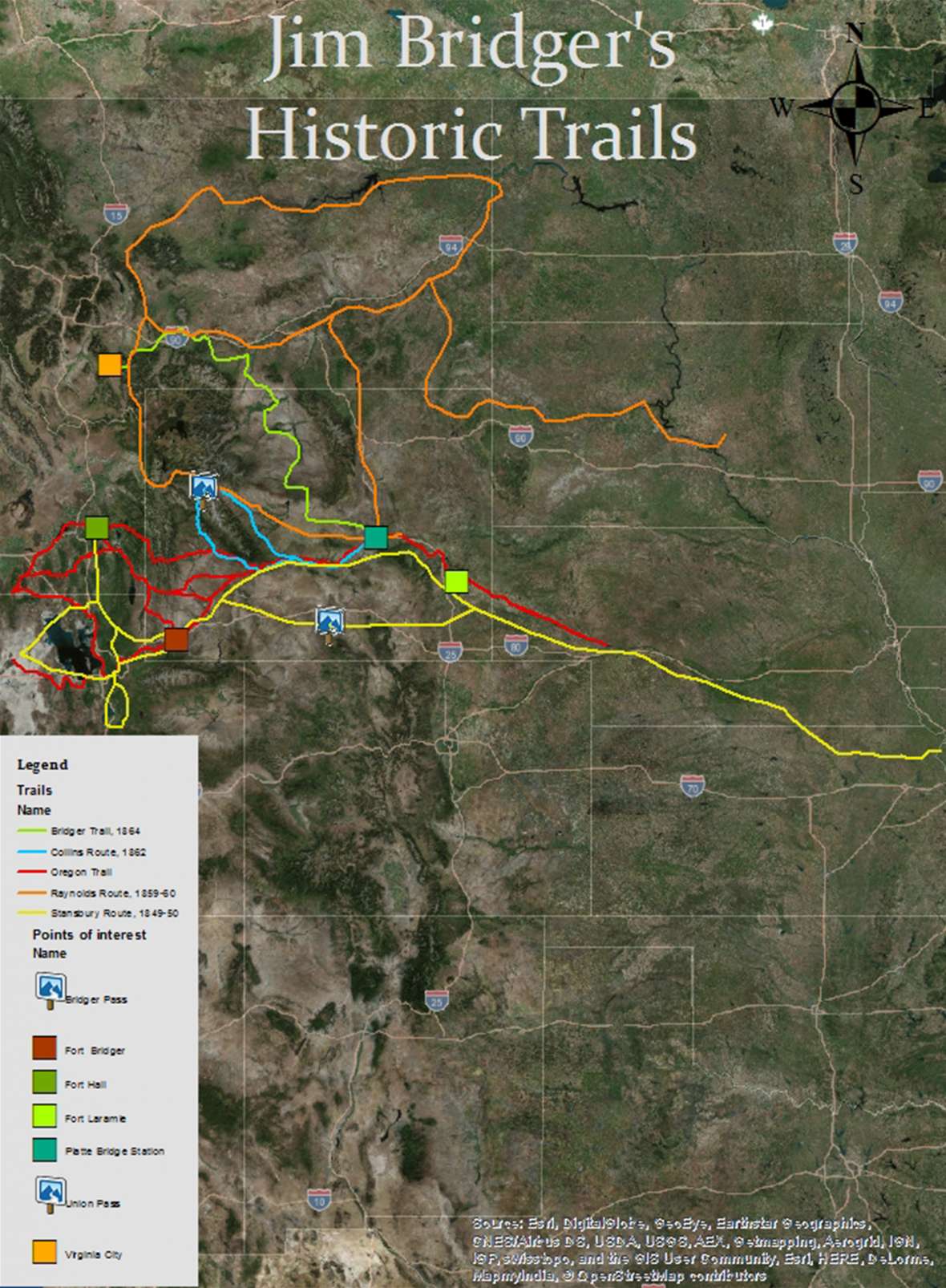 5. Write a brief  (300-450 words) essay on one, some or all of these questions. Use examples from the maps or from the text of the article to defend or explain your answer.

A Map of the West in his Head: Jim Bridger, Guide to Plains and Mountains
The Bridger Trail: A Safer Route to Montana Gold