The Bridger Trail: A Safer Route to Montana Gold

The Bridger Trail: A Safer Route to Montana Gold

In 1864, prospectors demanded a faster and safer route to the new gold fields of Montana Territory. Gold and silver had been discovered the year before at Alder Gulch near Virginia City in what’s now southwestern Montana, and a new gold rush was on. 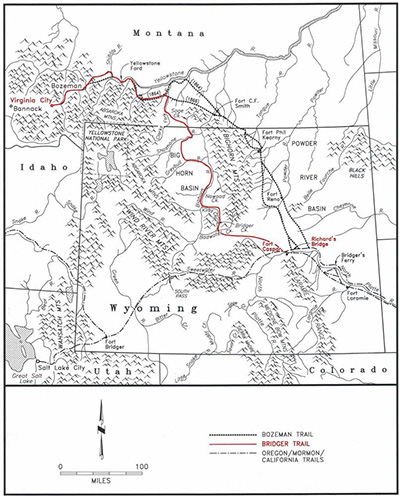 As a result, mountain man Jim Bridger blazed a trail that was safer than the better-known Bozeman Trail, which ran through Sioux country east of the Bighorn Mountains in the Powder River Basin. Bridger's trail, west of the Bighorns, was much shorter than following the Oregon Trail and Lander Cutoff before turning north toward Montana, and shorter still than longer routes by way of Fort Bridger or Salt Lake City.

Even so, Bridger’s Trail never drew much traffic. Only five wagon trains took the new route: north through the Bighorn Basin to the Yellowstone Valley, west and over a divide into the Gallatin and Madison valleys and finally back south up the Madison to the gold fields near present Virginia City, Mont.

More important in the long run, however, was the role this early transportation route played in the late 19th and early 20th centuries in the peopling of the Bighorn Basin by white settlers.

The need for Bridger’s route

Bridger's route was no accident. Plains Indian tribes had promised the rich hunting grounds of the Powder River Basin under the terms of the 1851 Treaty of Fort Laramie. By 1864 they were beginning to attack Montana-bound travelers invading that country on the Bozeman Trail east of the Bighorn Mountains.

These attacks by the Lakota Sioux and their allies, the Northern Cheyenne and Northern Arapaho, became known as Red Cloud’s War, a campaign to force Euro-Americans and the U.S. Army out of the Powder River country. The tribes’ efforts resulted in the closure of the Bozeman Trail and abandonment of new forts there as part of a new Fort Laramie Treaty in 1868.

By pioneering a route west of the Bighorns, Bridger sought to avoid these troubles. His route did not gain military support and emigrants used it for only one season.

Nevertheless, the trail was important because it funneled a large number of emigrants--approximately 25 percent of the 1864 population of Virginia City--into Montana Territory during that single year. Many of the emigrants homesteaded, rose to prominence in their communities and made important contributions to territorial development.

Of course, the trail is also historically significant for its association with Jim Bridger, notable for his contributions to the development of the American West as one of the most renowned explorers and guides in American history.

Jim Bridger was completely familiar with the region of the Bighorn Basin and the path he chose for the 1864 trail from his 40 years of experience in the Rocky Mountains. 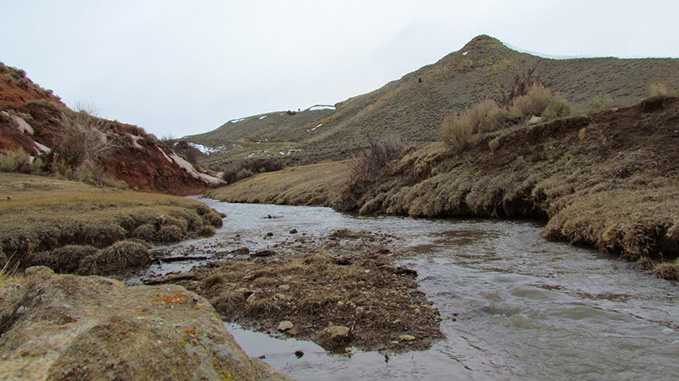 Exploring with Raynolds and Maynadier, 1859

Bridger also, however, had pioneered the way into the Powder River country several years before John Bozeman's trek in 1863 gave the Bozeman Trail its name.

In 1859, Capt. William Raynolds of the U.S. Army Corps of Topographical Engineers was ordered to locate four possible wagon routes through what are now northern Wyoming and southern Montana. The expedition was instructed to separate into two groups, with one exploring the upper reaches of the Bighorn River while the other explored the upper Yellowstone River valley.

On the recommendation of the Chouteau Fur Company, long the headquarters for mountaineers, Raynolds hired Bridger to lead the expedition. They left Fort Pierre on the Missouri River in what’s now South Dakota in June, traveling overland to the Yellowstone River, where they arrived in late August.

With Bridger as guide, the party ascended the Yellowstone to the mouth of the Bighorn River, and there split in two. Lt. Henry Maynadier took one group and proceeded southeast to the Rosebud, Tongue and Powder rivers. His party rejoined the main party on the North Platte River in October.

Raynolds continued south up the Bighorn, and then left the river for a southern course along the eastern flank of the Bighorn Mountains. This way proved the feasibility of a wagon road through the region to the Oregon Trail along the North Platte and Sweetwater rivers and established the future course of the Bozeman Trail.

The following spring, Raynolds and Maynadier traveled separate routes. Raynolds chose to explore the Yellowstone country. Maynadier's exploration along the upper Bighorn River through the Bighorn Basin provided the basis for future historians to claim that he was responsible for the location of the Bridger Trail route used by Bridger in 1864.

Maynadier, however, had never been in the country before, and his guide was not nearly as experienced as Bridger. His course differed considerably from the trail blazed by Bridger four years later. Therefore, Jim Bridger is given the credit for locating the Bridger Trail route.

In the spring of 1864, Col. William Collins, in command at Fort Laramie, temporarily released Bridger from his commission as post scout so that he could guide the first train of miners and emigrants north on what was to become the Bridger Trail. Bridger respected the territorial boundaries of the Sioux and did not wish to subject emigrants to the danger of Indian attacks.

An emigrant train left Denver about May 1, and headed north to Fort Laramie bound for the Montana gold fields. Expecting a surge of emigration to Montana and understanding well the kinds of pressures that led to trouble with the tribes, Collins had telegraphed his superiors on April 26 and expressed his concerns for the new route through the Powder River Basin.

"Immigration is coming rapidly; trouble with the Indians may be expected, and I need power or instructions. … A large party is coming from Denver to go a new route from the Platte to the mines, crossing the Big Horn and Yellowstone. … Other trains are coming with same object. The route will be at least 200 miles shorter, through a country that ought to be opened, but a strong military party will be necessary. … I have devoted the last two years to understanding this country. … In this mountain service it is better to lead than follow immigration. Could I have my way, it should be sifted, controlled, and guided on designated routes; not permitted to run wild and make trouble."

Bridger agreed to guide the train by the safer path west of the Bighorn Mountains and through the Bighorn Basin, which required no military escort. He left Fort Laramie on May 20 and headed west up the North Platte River for the 10-day, 140-mile trek to the Bridger Cutoff west of Red Buttes.

Bridger’s route departed the main Oregon Trail west of Red Buttes on the North Platte River just west of present Casper, Wyo. Heading northwest, the trail skirted the southern end of the Bighorn Mountains, crossed Badwater Creek, and then proceeded up Bridger Creek, passing over what today are known as the Bridger Mountains, which rim the southern edge of the Bighorn Basin.

The trail descended the northern slope of the mountains via the Kirby Creek drainage to the Bighorn River in the southern Bighorn Basin. The trail crossed to the west bank of the river near present-day Lucerne, Wyo., about eight miles north of Thermopolis. From there the trail continued downstream to the north, fording the Greybull and Shoshone Rivers. The trail approached the Montana border in the vicinity of present-day Frannie, Wyo.

Once in Montana, the trail proceeded north to Clarks Fork of the Yellowstone River, continued downstream to the vicinity of Rock Creek where the Bozeman Trail joined Bridger's trail. From this point the two routes continued west to the south of the Yellowstone and crossing it east of present-day Livingston, Mont. From there, the two courses took different ways over the mountains in the vicinity of present-day Bozeman Pass, then rejoined as a single route into the recently established community of Bozeman. The trail continued west, crossed the Gallatin River, and then proceeded to the Madison River and turned south, upstream to the bustling gold mining community of Virginia City.

The Bridger Trail from Red Buttes to Virginia City was approximately 510 miles. A wagon train, with no stops for extra prospecting, could make the distance in 34 days. Bridger's train, leading the way and taking extra time for roadwork, traveled the route in about 50 days.

Three decades later, in the 1880s and 1890s, the main Bridger Trail route served as the trunk line for a freighting network of wagon roads that connected remote ranches in the Lost Cabin area with Casper to the east and the Bighorn Basin to the north.

This way also provided rural communities in the Bighorn Basin access to markets via the railhead in Billings, Mont., helping sustain the emerging economies of those towns into the 20th century.

The Chicago, Burlington and Quincy Railroad was built into the north end of the Bighorn Basin by 1901, but freight wagons continued to transport a variety of merchandise to and from the railheads along portions of the old Bridger Trail prior to the advent motor vehicles.

Roads following the trail remained the principal route into the Bighorn Basin from the south until the railroad was completed through Wind River Canyon in 1913. A road, now U.S. Highway 20, was finished through the canyon 14 years later.

Travelers today may still follow the route of the trail over the Bridger Mountains, however, along unpaved but well-graveled county roads. The scenery looks much the same today as when Bridger led the wagons in 1864. Few vehicles use the route, but many oil and gas pipelines follow it--a testimony to its continuing value to Wyoming's transportation needs. 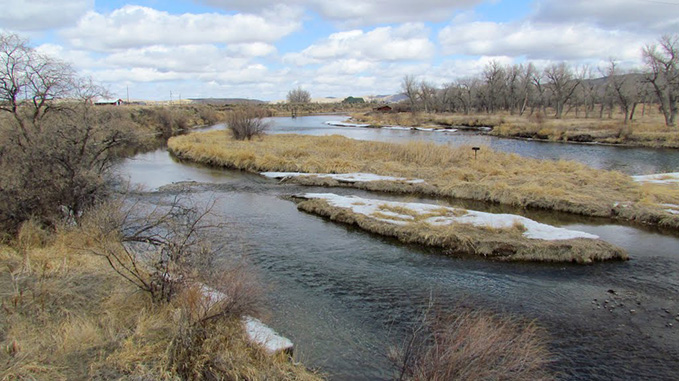 Editor’s note: An earlier version of this article was published originally at http://wyoshpo.state.wy.us/btrail/jimbridger.html as part of “The Bridger Trail,” an extensive website on the subject published by the Wyoming State Historic Preservation Office with support from Burlington Resources. Used here with permission and thanks.

Jim Bridger begins guiding first wagon train of prospectors along the Bridger Trail through the Bighorn Basin to the gold fields of Montana.

Professional historian James A. Lowe of TRC Mariah Associates, Inc., was commissioned by the Wyoming State Historic Preservation Office to write extensive material for a SHPO website on the Bridger Trail, which is no longer available. He is an expert on the history and condition of the trail and has published extensively on the route and its history. His book The Bridger Trail: a viable route to the gold fields of Montana Territory in 1864 was published by the Arthur H. Clark Co in 1999.

A Map of the West in his Head: Jim Bridger, Guide to Plains and Mountains
Fort Bridger

More about Lucerne at Wyoming Places

Bridger Trail through the Bridger Mountains

To follow roughly the route of the Bridger Trail over the Bridger Mountains to where the trail crossed the Bighorn River, take U.S. 20-26 to Moneta, Wyo. At Moneta turn north and follow the paved Fremont County Rte. 176 for 8.2 miles to Lysite. Head northwest from Lysite on the Badwater Road, a dirt road, for 2.7 miles to the Bridger Creek Road. Turn right and follow it north about 12.4 miles to the point where the Dry Bridger Road comes in from the left. Continue north on the Bridger Creek Road for 1.7 miles. Bear left onto the Kirby Creek Road, Hot Springs County Rte. 7. Continue north 19.4 miles down the Kirby Creek Road to its intersection with Wyoming 172, the Black Mountain Road, which is paved. Turn left, west, on the Black Mountain road and follow it 13.4 miles to the crossing of the Bighorn River and, just beyond, U.S. 20/Wyoming 789, the main highway along the river between Thermopolis and Worland. Avoid the route in wet or snowy weather; a sign advises no travel between Oct. 1 and June 1. For a good map, see Wyoming Road and Recreation Atlas, Medford, Ore.: Benchmark Maps, 2008, pp. 46 and 56.