Compare and Contrast the Fort Laramie Treaties of 1851 and 1868

Compare and Contrast the Fort Laramie Treaties of 1851 and 1868 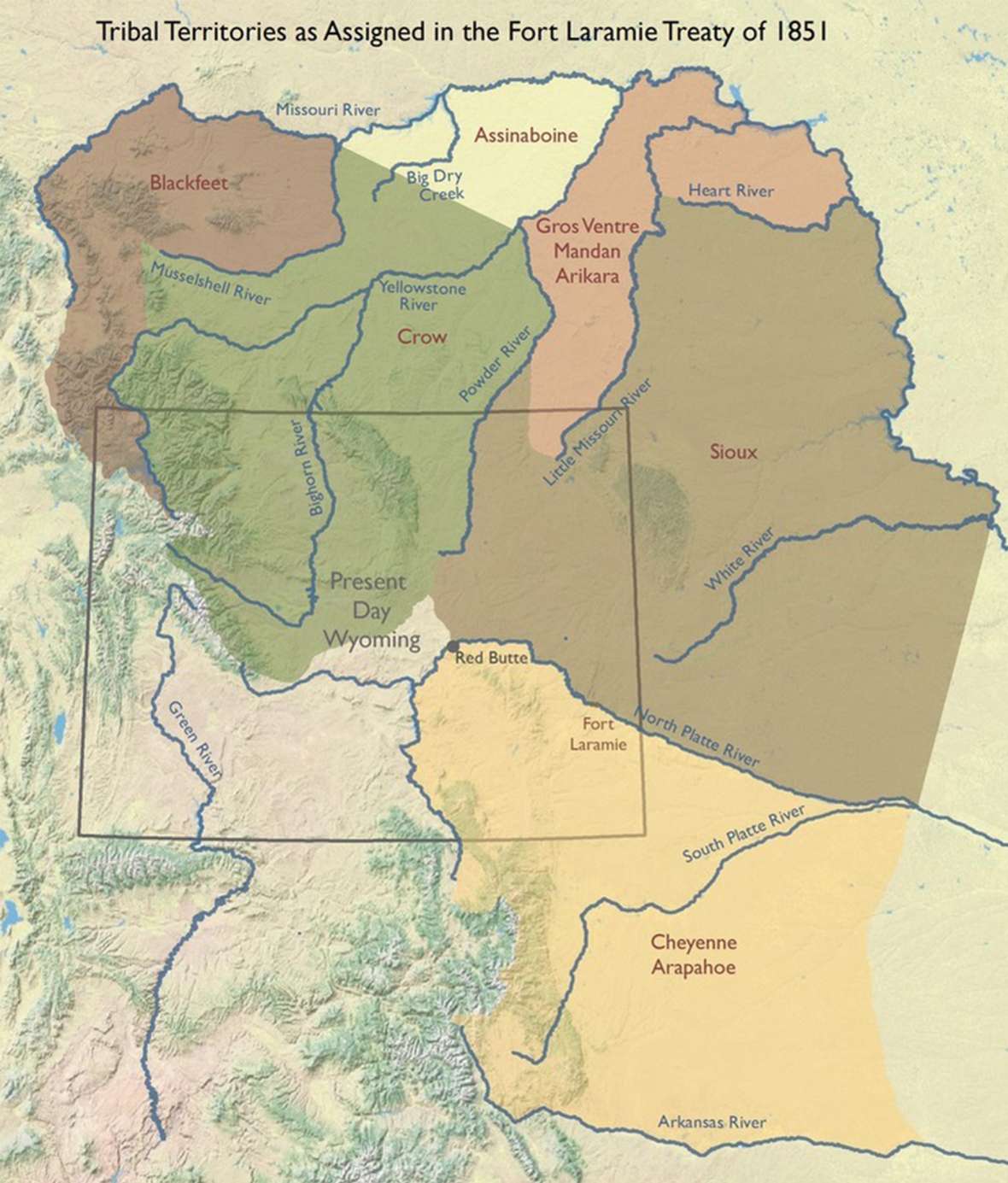 2. Students will discuss: What is the meaning of the word treaty?

3. Students will be introduced to the Fort Laramie Treaty of 1851, and study the map, above. Here is  background on the treaty from North Dakota Studies:

By the middle of the 1840s, Plains Indian tribes felt the impact of increasing traffic on the Overland Trail. Game was harder to find. Travelers used up grass for their horses and timber for their campfires. Anglo-American travelers, however, saw Indian tribes as an obstacle to the expansion of the United States across the continent.

In 1851, the U. S. Commissioner of Indian Affairs decided to conduct a Grand Council with the Plains tribes. The Superintendent of Indian Affairs, David Mitchell, sent messengers to invite the tribes to a meeting near Fort Laramie on the North Platte River. The council began on September 9.

It was a huge gathering. There were 7,000 lodges of Assiniboines, several bands of Lakotas (Sioux), Crows, Cheyennes, Arapahos, Blackfeet, Mandans, Hidatsas, and Arikaras. In addition to the Superintendent, interpreters and Army officers, there was one white woman, Mrs. W. L. Elliott. Her presence demonstrated that the council was to be peaceful.

This was the first time the tribes had met in such a large and diverse group to discuss treaties with the U. S. government. Mr. Mitchell spoke to the gathering in English (See the text of the treaty, under Primary Sources, below). Read his remarks here.

4. Student will be put into groups or partners.

5. Each group or partners will be given an article of Fort Laramie Treaty of 1851. (See links to articles under "Materials provided," above the map.)

6. The groups or partners will read the article and summarize the text and meaning of the article.

7. After the students have summarized, they will share with the whole class their articles and summaries while other students will write down their summaries.

Here are the texts of the treaty articles with space after each one for student summaries:

Exit Ticket: What do you think is the most important article of Fort Laramie Treaty of 1851? Why?

Students will discuss: What things are important to keep America strong?

Students will be introduced to the Fort Laramie Treaty of 1868. Here is some background:

By the middle 1860s, Lakota Sioux, Cheyenne and Arapaho people were being pressed closer and closer to war as white people flooded into the territories set aside for the tribes in 1851. In 1864 in southeastern Colorado, troops attacked a peaceful village of Cheyenne and Arapaho on Sand Creek, killing about 150 people, including women and children. Deeply angered, many of the tribes from that area moved north, joining their northern Cheyenne, Arapaho and Lakota relatives, and in the summer of 1865 attacked the Army post on the North Platte at what’s now Casper, Wyo., killing about 25 soldiers.

Later that summer the Army sent thousands of soldiers north into the Powder River Basin to punish the tribes, and in the next few years built a string of forts to protect white travelers on the Bozeman Trail to the gold fields of Montana. The forts were in the heart of the Powder River Basin—country that had been promised the Sioux in the 1851 treaty. The war intensified. Finally, with the new transcontinental railroad nearly completed across southern Wyoming, the government figured it was time to make peace.

Official government peace commissioners came to Fort Laramie in the spring of 1868 with a new treaty, offering to protect the tribes if they would agree to settle on reservations on far smaller pieces of land than had been described in the 1851 treaty.

In return for the tribes’ agreement to make peace, the government promised to provide clothes, food, schools for their children, farming implements and instruction in farming, 320 acres of land for any family that committed to farming, and more. The goods were to be delivered at the Indian agency on the reservation on the first of September each year for 30 years.

The treaty was signed by the government commissioners and by representatives of the Northern Arapaho and Northern Cheyenne tribes at Fort Laramie on May 10, 1868. Similar treaties were signed that year at Fort Laramie with the Crow, Lakota Sioux and other tribes. 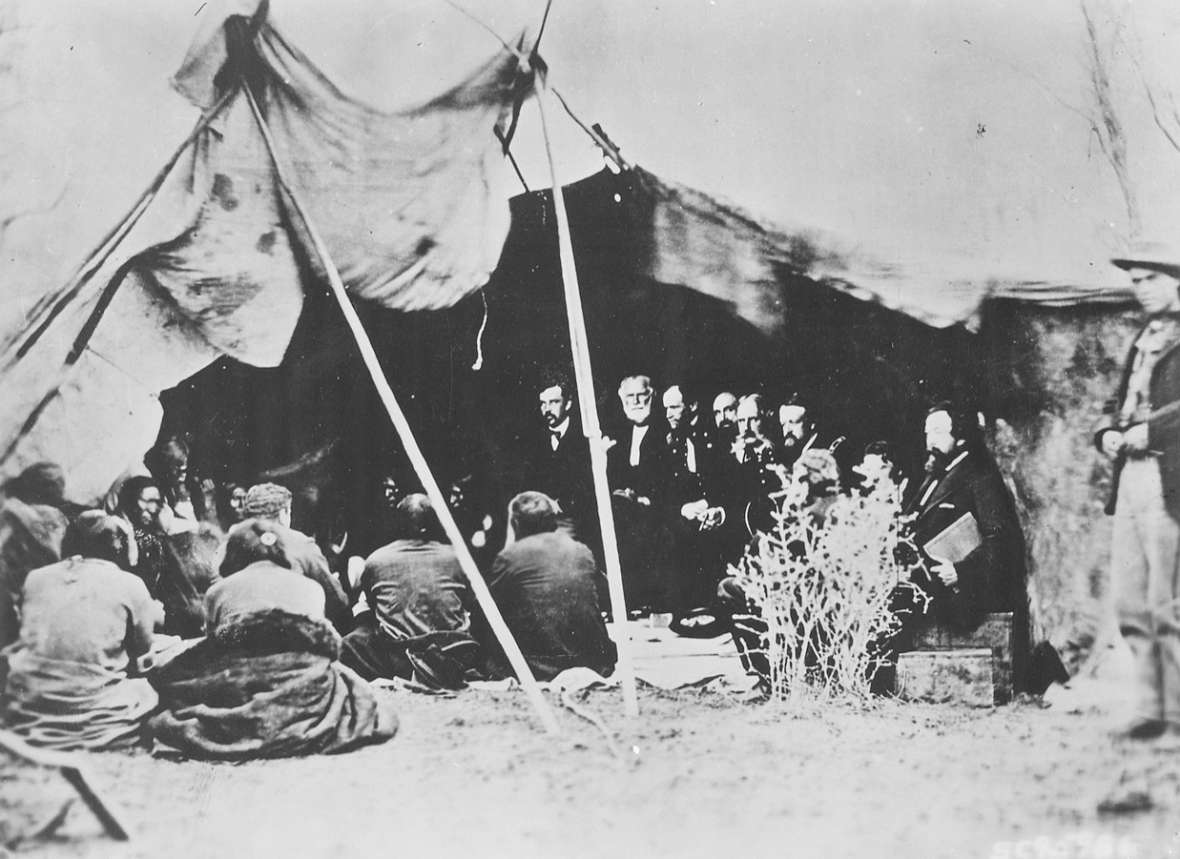 2. Students individually or as partners or groups will read and match the articles in the Fort Laramie Treaty with the "Treaty with the Northern Cheyenne and Northern Arapaho, 1868," linked here and attached in full under Primary Sources, below, to the summary provided on the worksheet.

As whole class, students will discuss the similarities and differences of the two treaties. They will write them on the Venn Diagram.

Exit Ticket: Do you think the Fort Laramie Treaty of 1868 was fair? Why?