The University of Wyoming Textbook Controversy, 1947-48

The University of Wyoming Textbook Controversy, 1947-48 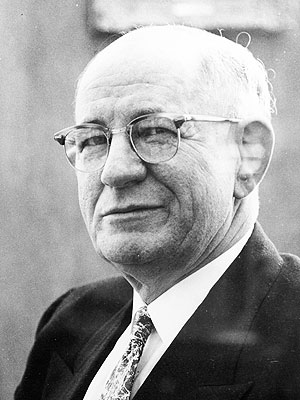 Americans in 1947 were still celebrating the long, difficult victories over Nazi Germany and Japan, but beginning to have doubts about the intentions of one of the former allies, the Soviet Union. Spread of communism had worried Americans in earlier times, but their concerns in 1947 were fueled by ideology as well as by Soviet occupation of Eastern European countries, by gains of Communist insurgents in China, and by rumored experiments with atomic weapons.

In this atmosphere, universities in America were prospering from the millions of returning war veterans going to college on the newly passed “GI Bill.” The bill granted veterans up to $500 per year for tuition and a minimum of $75 per month for living expenses. The University of Wyoming was experiencing a similar boom—the largest in its history. In 1945-46, enrollment languished at 1,500 students. A year later, the number more than doubled to 3,364—more than 2,000 of them veterans. Some 1,560 were newly admitted freshmen.

University officials scrambled to provide housing for the new students as well as sufficient classroom space and courses. Between 1945 and 1947, 150 new faculty members joined the ranks at UW. Dr. George “Duke” Humphrey, hired in 1945 from Mississippi, served as UW president during this boom period. A conservative, strong-willed administrator, he already was pressing to make UW athletics competitive at the national major-university level.

When Humphrey introduced the commencement speaker, Governor Earl Warren of California, in June 1947, he was working under the direction of an influential group of Wyomingites serving as university trustees. Milward Simpson, prominent Cody attorney and unsuccessful Republican candidate for the Senate in 1940, held the chairmanship of the board. His vice chair was newspaperman Tracy McCraken, the longtime Democratic Party chairman who owned daily papers in Cheyenne, Laramie, Gillette, Worland, Rawlins and Rock Springs.

That summer, Simpson and the board treasurer, Torrington dentist P. M. Cunningham, attended a meeting of the governing boards of land grant universities on the campus of the University of Michigan. During the sessions, speakers urged the assembled trustees to return to their home institutions and press for mandatory training for all students in the U. S. and state constitutions. Simpson and Cunningham smugly noted that such a requirement had been in Wyoming law since the middle 1920s when, at the insistence of the indomitable Dr. Grace Raymond Hebard, the Legislature mandated "one year's instruction" in the constitution. (The requirement remains in the statutes and UW's university studies program thus requires a "V" course--instruction in the Constitutions of Wyoming and the United States.)

Later at the meeting in Michigan, a speaker warned of possible “Communist subversion” in the form of textbooks being used in various universities. Simpson noted that one example—not used at UW—was an economics text preaching the clearly Communist doctrine that “government deficits aren’t bad.” To the minds of most of the fiscal conservatives among the UW trustees, such doctrine was a prima‑facie example of Communist propaganda.

When the trustees met on Oct. 27, 1947, the board worked on numerous proposals to accommodate the ever-increasing student numbers. At one point, Dr. Cunningham made a motion that President Humphrey “appoint a committee to read and examine textbooks in use in the field of social sciences, to determine if such books were subversive or un-American.” The motion was seconded and passed after practically no discussion.

Without delay, Humphrey announced appointment of several deans to such a committee, naming R. R. Hamilton, dean of the law school, as chairman of the examining group. The faculty reacted almost immediately. The newly established chapter of the American Association of University Professors noted the potential problem, and when the faculty met on Nov. 19 for its quarterly meeting, it voted 123-24 the members’ opposition to having such a censoring board. The faculty voted to have 15 of their number represent the faculty position before the board. Dr. T. A. Larson, chair of the History Department, was chosen as chairman of the “committee of 15.” 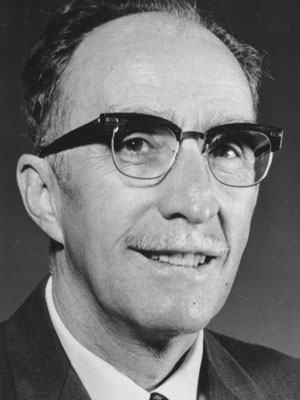 The committee of 15 met later that week and agreed that the faculty had two goals: end the investigation and affirm principles of academic freedom.

Laramie Republican-Boomerang editor Ernest Linford editorialized on the side of the faculty, noting that the board was trying to restrict the “free marketplace of ideas”—a bedrock American principle. His boss, the owner of the Boomerang, was trustees Vice Chairman Tracy McCraken. In his editorials published in the Wyoming Eagle (Cheyenne), McCraken took the opposite position, arguing that “academic freedom” could be used as an excuse for “practicing subversion.” Soon after, Linford quit as Boomerang editor, moving to the Salt Lake Tribune. His departure was perhaps prompted by his stand on this issue.

Soon, the University of Wyoming was the subject of national media reports—many of them favorable to the board, some darkly implying that the university was troubled with subversives. To strong UW boosters like Simpson, McCraken and Humphrey, these reports were alarming. How might the controversy color national opinion about UW?

Meanwhile, the committee of 15 hammered out a nine-page series of arguments against the trustees’ efforts at “censorship.” One provision noted that the plan was an “insult to faculty,” implying that they were either incompetent in choosing textbooks or subversive. One statement pointed out that few classes at UW actually used textbooks, arguing that textbooks were a “crutch” for poor teachers who couldn't develop their own course materials.

The rhetoric escalated on both sides, and the shrill voices of the national papers and commentators seemed to be impugning UW. Vice Chairman McCraken, nervous about what he saw as a coming black eye for his beloved university, wrote to T. A. Larson on Dec. 31. He suggested that a compromise was possible and recommended that a meeting be held between two trustees and two of Larson’s “committee of 15.”

Larson answered that he and the vice chair of the committee of 15 would meet with the two trustees for lunch at the Plains Hotel in Cheyenne mid-January to discuss the issues. While the four were meeting on Jan. 20, President Humphrey back in Laramie released the report of his investigating committee. After examining 65 books, Humphrey reported, the investigators found not a single instance of “subversion.”

At the lunch, Larson assured the two trustees that “no radical doctrines were being taught.” As the conversation continued, the groups agreed that the entire committee could present its case to the board of trustees at a special meeting.

The board then acknowledged that the faculty should continue to make book selections based on their usual procedures. Even more important, the board confirmed that principles of academic freedom would be applied at UW from that time forward. It was a clear victory for the faculty even though various board members continued to assert that such a concession did not diminish their diligence in uncovering “anti-American activities” in education.

The most junior member of the committee of 15, untenured history Professor Gale McGee, later said that the “faculty came of age” as a result of the incident. He also later claimed that unnamed trustees hired students to take notes in his lectures, hoping to uncover “anti-American statements” that could lead to denial of tenure. McGee was elected to the U. S. Senate in 1958, serving in that capacity until 1977. He once told this writer that had he not won the Senate race in 1958, he would have been seeking work elsewhere because Humphrey fired him when McGee announced for the Senate that summer.

The textbook incident brought an extraordinary level of student involvement. Many of the students were World War II veterans. Several went on to prominent careers in journalism, law and business in Wyoming.

The controversy came to a quiet close through a distinctively “Wyoming way” of interacting. Principals on both sides were well acquainted—even friends in most cases. In a different place where anonymity would have been more likely, such a result probably would have been impossible. To defuse the controversy and satisfy all sides, civility prevailed.

But despite its abrupt and relatively amenable conclusion, the incident did not represent the end of anti-Communist activities in Wyoming. Simpson, McCraken and President Humphrey remained active in "anti-subversive" organizations.

As the controversy was unfolding, wealthy Cody area philanthropist William R. Coe noted the university’s stand on anti-Communism. In the ensuing years, he continued his friendship with Milward Simpson and developed a close friendship with UW President Humphrey. Coe proposed forming a program of American studies at UW where principles of capitalism and anti-Communism could be taught to Wyoming students. Following his death in 1955, his will not only provided additional funds for construction of an “American Studies Building” but also “if sufficient funds remained,” the university could use the money to build a “general library” as a wing to the other building. The result is today’s history building and the attached Coe Library.

An incident seemingly headed toward acrimony and discord, perhaps student strikes, faculty dismissals and open warfare on the board instead led to some positive results. (Later, similar incidents led to far different results at universities, such as the University of Washington, where faculty were investigated by the Canwell Commission.)

The University of Wyoming gained funds for creation of an American studies program and construction of a library and for the first time the faculty members at UW were guaranteed an enduring notion of academic freedom. The university enjoys both to this day.

This article is a summary of the Constitution Day lecture given by Phil Roberts, associate professor of history, Sept. 18, 2006, at the University of Wyoming’s Student Union building.

University of Wyoming trustees appoint a committee to examine social-science textbooks in use on campus to see if any are subversive or un-American.