In 1904, John F. Patterson proposed establishing a town in the Green River Valley along Pine Creek in western Wyoming, in what then was still part of Fremont County. Patterson offered to build and stock a general store if local ranchers Charles A. Petersen and Robert O. Graham each donated five acres for the town site. The three men agreed, and hired a surveyor. Pinedale, Wyo., named after the post office on Petersen’s ranch, became a town on paper owned by the trio. 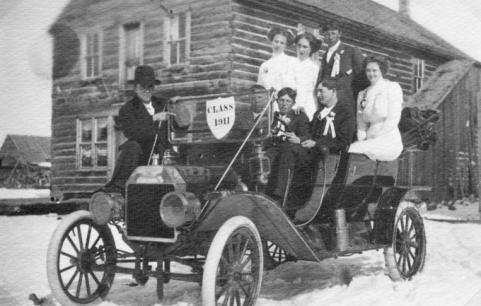 The boundary line set by the ranchers became Pine Street. Patterson earned recognition as the founder of Pinedale. On Sept. 26, 1904, the first town plat was drawn on a piece of yellow cloth showing blocks, lots and streets. That date was designated as Founder’s Day.

The tiny town served the area’s small, yet thriving, industries. This included supplying provisions for tie hacks living in mountain camps. Tie hacks, who cut trees and shaped railroad ties from them, came from around the world for this work. As Union Pacific Railroad expanded its tracks through Wyoming in the early years of the 20th century, it needed ties to support the new rails.

Even before the town of Pinedale was founded, guests, often known as “dudes,” paid guides to assist them during their visits to the nearby Wind River Mountains. During the late 1800s, tourists came to enjoy horse pack trips, fishing and hunting in the beautiful nearby mountains.

Great herds of Hereford and Black Angus cattle roamed on area ranches in the Green River Valley, some of which were established before the town itself. Ranchers and cowboys, along with their families, were among the early settlers of the region.

In 1912, Pinedale was incorporated and gained its popular claim to fame as the incorporated town farthest from a railroad in the United States. The closest railroad is 110 miles away in Rock Springs, Wyo. The town was small—its first count, in the 1920 census, put the population at 94 people. 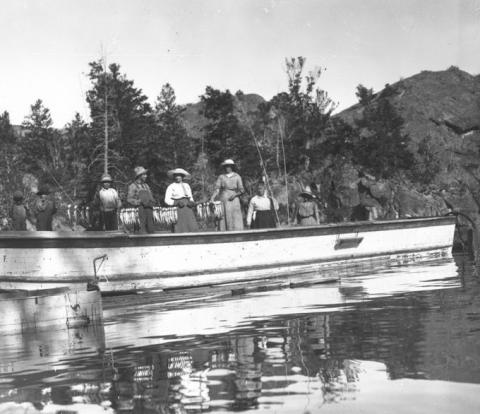 When the U.S. entered World War I in 1917, about 70 young men from Pinedale and the Green River Valley volunteered to serve in France with a machine gun company of the 3rd Wyoming Infantry. Others were drafted later. Two Pinedale men were among the 468 from Wyoming killed in the war.

In the 1920s, the town council approved the building of streets and sidewalks, and afterwards, sought the help of local citizens to plant and water trees along the borders. At the same time, a small electric light plant made it possible to light the streets at night. As more people moved to the area seeking opportunities, Pinedale nearly doubled in size as new stores, hotels, other businesses and modest homes were constructed.

A big victory for the area came in February 1921, when the Wyoming Legislature passed and Gov. Robert Carey signed a bill forming Sublette County. A few months later, Pinedale was chosen as the county seat following a heated debate and controversial election that created hard feelings with residents of the other town in the new county, Big Piney.

Additional financial assistance came when the longer-lived Works Progress Administration provided funds for the construction and improvement of the water and sewer system, development of the airport and construction of a new brick schoolhouse. The largest federal program in the area was a Civilian Conservation Corps camp built on the south shore of Fremont Lake. Several local young men worked at the CCC camp, but their numbers were small compared to hundreds of others who came from throughout the nation to take the jobs. Jobs for the enrollees included thinning forest trees, eliminating rodents, preparing public campgrounds, and building trails and bridges in the area’s national forests.

Pinedale was once again directly affected by world events when the nation went to war in December 1941. Townspeople raised money through the sale of war bonds and the collection of materials for recycling. Records of the local post of the Veterans of Foreign Wars show that around 400 young men and some women from Pinedale joined the military services and served around the world. And, as in World War I, two were killed.

Phones, power and a library

In the 1950s, Pinedale began feeling the national postwar boom. The town again improved its infrastructure, renovated some of the streets and sidewalks and expanded the fire department.

Private industry also contributed to this growth. Both the telephone and electric-power companies, for example, were local and family owned. Earle Crandall bought the phone company in 1950, and in 1955 installed a new, seven-digit dial system that linked Pinedale to nationwide toll dialing systems. The business could handle 1,500 different telephones, with up to 40 conversations at once.

The Glenn Wise family, which owned the electric power plant, built a bigger and better plant after the old one was destroyed by fire in 1951. In 1957, the Pinedale Lions Club cooperated with the Wises to raise funds to bring in a television translator to the valley for the first time, which allowed local broadcast of KID-TV from Idaho Falls, Idaho.

For the first time in the 1950s,highways to and from Pinedale were generally paved and passable year-round. One result was the consolidation of several small rural school districts into a single larger one based in Pinedale. Better roads meant parents in the rural areas could get their children to Pinedale for education. A kindergarten was added to the elementary school and a new high school was built.

Also during the 1950s, Pinedale’s first public medical clinic was opened, and an outdoor swimming pool and ice-skating rink were constructed.

In 1951, Sublette was the only county in Wyoming without a public library. Residents took charge, formed associations and raised money and books for a community library. In 1958, new state law provided state assistance to county libraries, and community leaders from Pinedale and Big Piney created a county library system to take advantage of the new state funding.

The 1960s in the United States was a time of social unrest and transition. Voices for social and political change were heard in Pinedale, but did not seem to affect those making a living from the land and the limited economy of Sublette County. Pinedale streets saw no protest marches, but continued to be used for cattle drives, high-school homecoming parades and racetracks for horses and drivers in chariot and cutter races.

A national spotlight fell on Pinedale in the early 1970s, however, when the community protested the use of atomic devices to assist with natural gas extraction in an area south of town. The Wagon Wheel Project, as it was called, was a joint venture between private industry--El Paso Natural Gas Company—and the U.S. government in the form of the Atomic Energy Commission. Ultimately, the community won when the project failed.

In 1936, the community began celebrating Rendezvous Days, held annually in July. Festivities include reenactments of fur traders’ and Indians’ lives during the early fur trade era, and commemorate the original rendezvous of the 1830s that were held near Pinedale. The tradition continues today.

Pinedale has generally experienced relatively slow growth. It is a community that survived throughout the 20th century because of agriculture and tourism. The town’s isolation forced early citizens to be hardy, fiercely independent and self-sufficient.

The Pinedale of the past, though, began to change profoundly in the late 1990s with the exploration for and extraction of natural gas in massive fields south of town--in the Jonah Field and the Pinedale Anticline. The community continues to grapple with rapid change, especially with the influx of new people in Pinedale and the surrounding area who come to work in the mineral industry.

Throughout the town’s history, Pinedale citizens have always worked and played hard. Hundreds of people participate in or watch rodeos, parades, chariot races, ski-joring (when a skier is pulled by a horse) dogsled races and other events during annual summer and winter carnivals. Tourism is still an important part of the local economy. Activities during Rendezvous Days include rodeos, parades and picnics, and draw crowds from near and far. Nearby Fremont Lake continues to be popular. Its deep-blue glacial water draws folks for picnics, boating, water skiing and of course, fishing--even in winter.

Pinedale, Wyo., founded when the first town plat was drawn on a piece of yellow cloth showing blocks, lots and streets.
Pinedale wins election for county seat of Sublette County by six votes.

Ann Chambers Noble and her husband, David, live with their children in Cora on their cattle ranch. Ann is also the owner of the historic Chambers House Bed and Breakfast in Pinedale. Ann is a writer and historian, with a B.A. in history from Bowdoin College and a M.A. in history from the University of Utah. She is the author of the award winning Pinedale, Wyoming; A Centennial History, 1904 – 2004 and Hurry McMurry; W. N. “Neil” McMurry, Wyoming Entrepreneur.

More about Pinedale and environs at Wyoming Places

As it has every year since 1936, Pinedale, Wyo., continues to host the Green River Rendezvous, now the second weekend of July. Events include a fur-trade encampment, children’s programs, lectures by white and Indian historians, a fur-trade craft fair, parade and pageant.

Sublette County Public Library, 155 South Tyler Avenue in Pinedale, Wyo. The library was built in 1998 and features traditional log architecture on a grand scale. Part of an addition made in 2009 is The Western Americana Room, featuring research materials about Sublette County, Wyo., and western history.