The Jews of Huntley, Wyoming

The Jews of Huntley, Wyoming

In 1920 Simon Landman was a 50-year-old Russian-Jewish farmer near Huntley, Wyo. Fourteen years earlier, he had moved his wife and seven children from Pittsburgh, Pa., to this part of rural Goshen County 10 miles south of Torrington and a few miles from the Nebraska line. After their arrival, they were fortunate to live in a frame house. Many of his neighbors had to live in dugouts before more permanent structures were built. Still, the house was difficult to heat and water had to be hauled from Horse Creek, almost two miles away.

Moreover, the area, including his own farm, was no Garden of Eden. Farming was physically demanding, sometimes he was barely making financial ends meet and his wife and children were unhappy. Any way he looked at it, his present condition did not seem as bright and promising as he had hoped many years ago it would be. 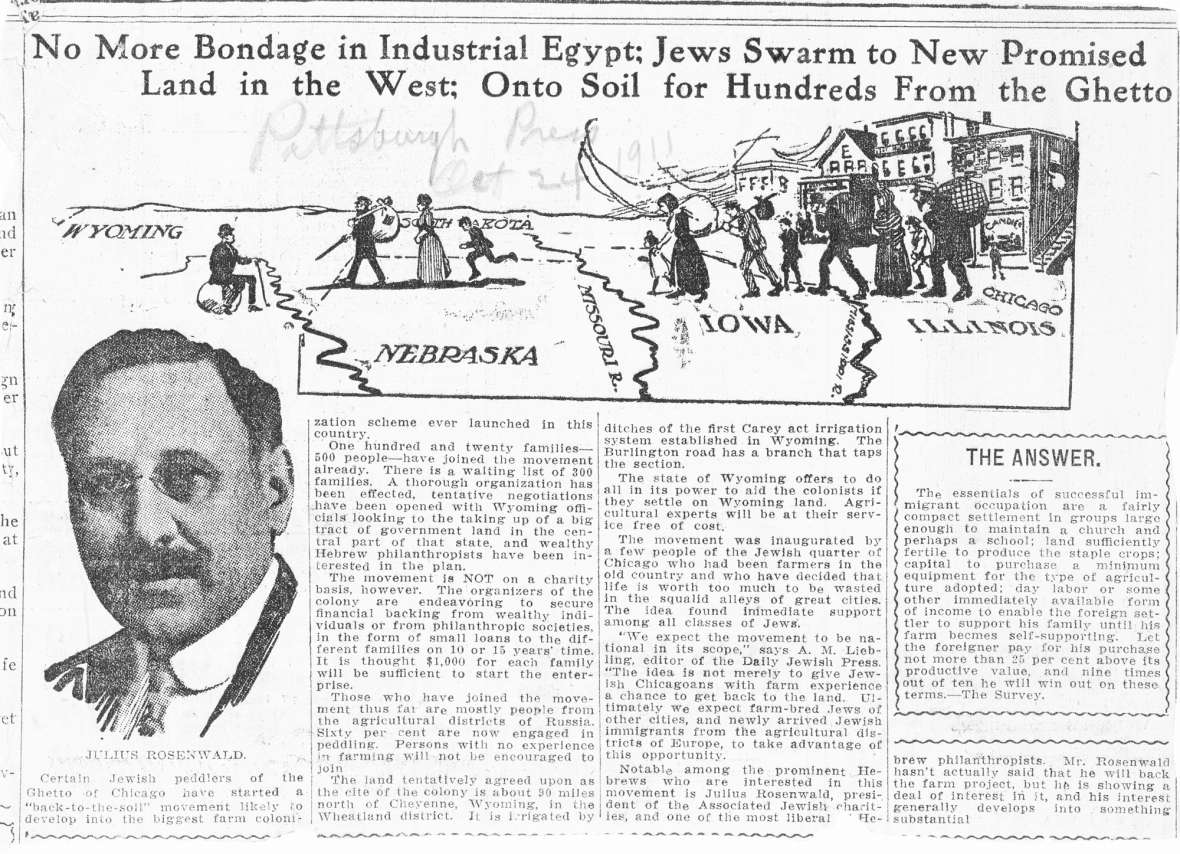 Landman was one of many Jews who had left eastern cities for better life elsewhere as farmers. The idea originated in the early 1800s, but it did not really get off the ground until the 1880s, through the efforts of the Hebrew Emigrant Aid Society, the Jewish Agriculturalists’ Aid Society, the Jewish Agricultural and Industrial Aid Society, and the Baron de Hirsch Fund. Jewish leaders tried to encourage residents to leave crowded urban areas for open, agricultural spaces across the country where they could become self-sufficient, productive and assimilated. By doing so, the leaders hoped, the gates would remain open to future Jewish immigrants into the U.S. 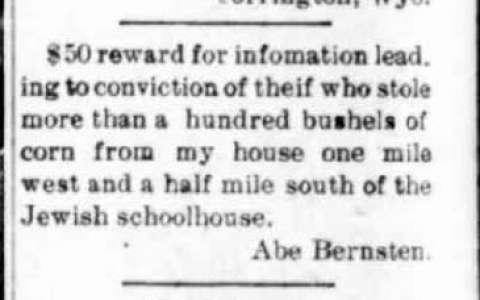 In Wyoming, many Jewish families settled south of the North Platte River between the town of Chugwater and the Nebraska border. The promise of available land under the Homestead Act, the proposed irrigation development under the U.S. Reclamation Service’s new North Platte River Project and loans from the Jewish Agricultural and Industrial Aid Society (JAIAS) of New York made the prospect of being a self-sufficient farmer here very attractive. Given the economic and social difficulties they were experiencing, some urban Jews were willing to take the risk and move west.

Participants had different motives for accepting this offer. Some sought a healthier and more independent life, and others wanted a way to make a respectable living. Despite the best of intentions, many efforts failed due to the ruggedness of the geography, the people’s inexperience in farming and their inadequate capitalization.[1]

The first Jewish families took up homesteads south and southeast of Torrington in 1906 and 1907. Beginning with 17 individuals, the community grew to 93 by 1910, but had dropped to 85 by 1920. Most were families from Russia, Poland and Romania and some from the states of Illinois, Nebraska and Pennsylvania.[2]

After reading numerous pamphlets and personally viewing the state, Simon Landman decided that he and his family were going to Wyoming. His wife, Leah, was not easily convinced but reluctantly agreed to go. The journey was marked by an air of uncomfortable silence and for Leah, personal feelings of despair. As her daughter, Minnie, recalled years later in an unpublished autobiography, “the land, what was visible of it, depressed her.” After moving onto the homestead, she wept. When their possessions arrived, the furniture was scratched, the casters were gone and the china was broken. Leah cried for hours.[3]

Adjusting to a new life was challenging for everyone. The landscape seemed strange and hostile to people unused to the open plains and living conditions were primitive. The nearest town was Torrington to the north. About five miles east, a post office named Allen was established in 1908 near the Wyoming-Nebraska border and became a meeting place for area farmers. As the rural population in the area grew, a post office named Huntley was established in 1922 but unlike Allen, a small town arose there a couple of years later. The Allen post office was discontinued in 1924, and Huntley became the locus, and historically speaking, namesake for the Jewish farmers. 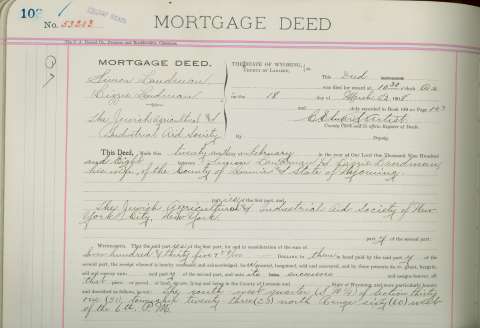 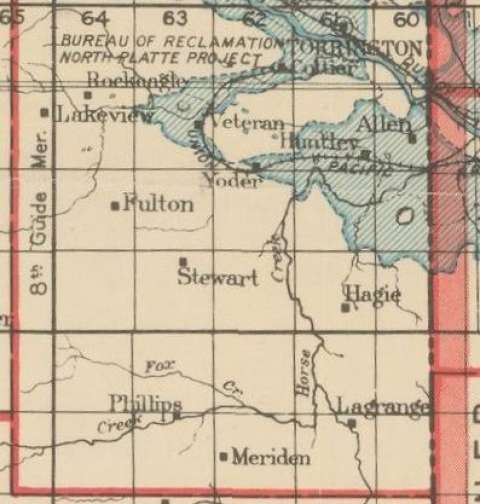 In time, the newcomers learned how to manage a farm, care for animals and raise various crops both for market and subsistence. A home life was re-established and provided routine and personal comfort. A public school, commonly called “the Jewish school,” was eventually created in Huntley for the area children. Though no house of worship was constructed, religious observances were collectively and privately held. Eventually a community of people with shared values and experiences emerged.

The biggest challenge for the Jewish farmers was economic. Farming did not always guarantee success but often required frugality and sometime sacrifices. To make ends meet, many sought loans from the JAIAS. Between 1907 and 1931, the JAIAS made 126 loans totaling more than $94,000 to Huntley farmers. Most were issued between 1913 and 1922.[4]

The lenders did not provide loans for every year. Moreover, they had concerns about the community’s future. A 1907 JAIAS report about the Goshen County residents stated, "these settlers could not have possibly made a more injudicious selection. The precipitation being less than ten inches, the land can not be worked without irrigation and although included in the Government reclamation plan, it will take at least five years before the promised irrigation can be had.”

Many supplemented their farm income by working as laborers on neighboring farms or in a skilled trade, such as printer, plumber or tinnier. Samuel Silverstein resumed his former job as a tailor, and Samuel Paris operated a brickyard.[6] The Jewish Gas and Oil Company, organized in 1916, had plans to explore mineral and petroleum development in southeastern Wyoming. The firm purchased leases but drilled no wells, nor did it produce any petroleum. The company apparently faltered and the Wyoming Secretary of State revoked its corporation status in 1927.[7]

Social and economic difficulties created tensions within families and between neighbors. Not surprisingly, many Jewish farmers considered leaving Huntley. Some left shortly after their arrival, but most departed between 1920 and 1930. During this latter period, farming as an occupation became even more difficult. An agricultural depression and dry weather had descended across the Great Plains. 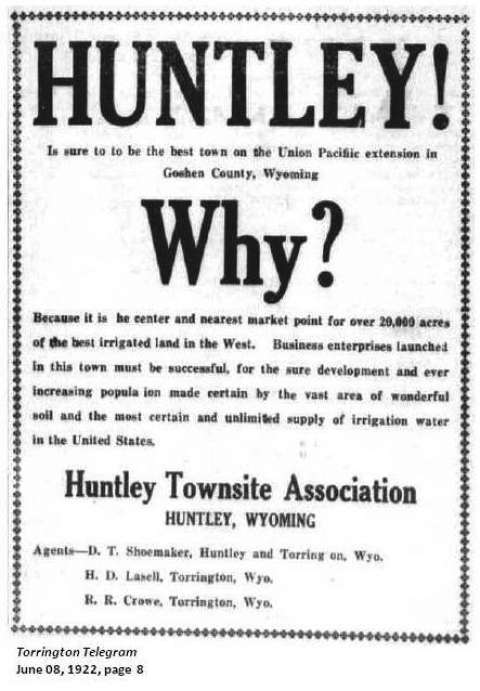 The much anticipated irrigation ditches of the North Platte River Project were still in the planning stages in the early 1920s. If plans ever were finalized, farmers would be assessed to pay for ditch construction as well as the water. That is, the ditches, which were supposed to make irrigated land more productive, would require more money and work from farmers.[8]

Lastly, personal privations proved too much to endure. Minnie Landman wrote that “the farm became a dull place for me … I was unhappy there, and decided to seek my fortune away from home.”[9] She eventually moved to Denver. Others moved to nearby Torrington, Wyo., Lyman or Mitchell, Neb., or Cheyenne or Denver—or returned to Chicago and Pittsburgh.[10]

In 1932, with his children grown and living elsewhere, Simon Landman sold his land. He and his wife, Leah, moved to Cheyenne, where he apparently retired. He died on Sept. 30, 1943. Of the early Jewish families who had settled in the Huntley area by 1920, only the Fieldman family remained in 1930. Frank Fieldman was the last Jewish homesteader to leave Huntley. He sold his farm in 1954 and moved to Cheyenne.[11]

Simon Landman, one of the early Jewish settlers of Huntley, Wyo., dies in Cheyenne, Wyo.

Carl Hallberg, reference archivist at the Wyoming State Archives in Cheyenne, also serves as book review editor for the quarterly Annals of Wyoming. He holds a bachelor’s degree in history from Augustana College of Illinois and a master’s degree in history with a concentration in archival management from Colorado State University. He has written many articles on a variety of historical subjects.