At an elevation of 8,247 feet, this monument stands at what once was the highest point on the route of the Union Pacific Railroad. The tracks were rerouted a few miles to the south in 1901, but the monument still looms over the surrounding plains and can be easily accessed from Interstate 80. 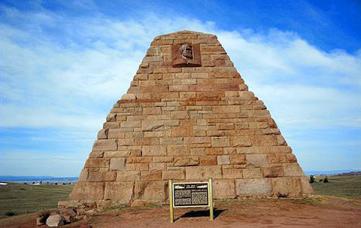 Completed in 1882 at a cost of $64,000, the structure honors Oakes and Oliver Ames, financiers and politicians whose business skills were largely responsible for the completion of the transcontinental railroad. The Ames brothers took control of the management and financing of the Union Pacific portion of the railroad at President Abraham Lincoln’s request. Prior to their involvement with the railroad, only 12 miles of track had been completed. Not long after the railroad’s completion in 1869, however, Oakes Ames found himself at the center of a massive scandal concerning the railroad’s financing.

The monument was designed by Henry Hobson Richardson, famed architect of Trinity Church in Boston, and was Richardson’s only commission west of St. Louis. The monument also features two bas-relief sculptures of the Ames brothers—Oakes on the east side, Oliver on the west—crafted by Augustus Saint-Gaudens, renowned sculptor whose creations include the Robert Gould Shaw memorial on Boston Common, the Parnell Memorial in Dublin, and a $20 double eagle gold piece for the U.S. Mint.

Industry, Politics and Power: the Union Pacific in Wyoming
Albany County, Wyoming
Marking the Past: A History of Wyoming’s Historical Markers

The Ames Monument is located about 20 miles east of Laramie, Wyo. and 29 miles west of Cheyenne. From I-80, take Exit 329 and follow the signs. Some travel on a gravel road is required. The site is open year-round as weather permits and is best viewed during daylight hours, although the grounds are open 24 hours daily. There is no admission fee, and while the site is handicapped accessible, there are no facilities.