Aerials to Zephyrs: A Brief History of the Casper Army Air Base

Aerials to Zephyrs: A Brief History of the Casper Army Air Base

On Dec. 7, 1941, the Japanese Navy attacked the United States at Pearl Harbor, Hawaii, and almost simultaneously at other locations throughout the Pacific. The United States’ response was quick and decisive. The U.S. Army Air Force (USAAF) under command of Maj. Gen. Henry Harley “Hap” Arnold was authorized to equip, man and train itself into the world’s most powerful air force. 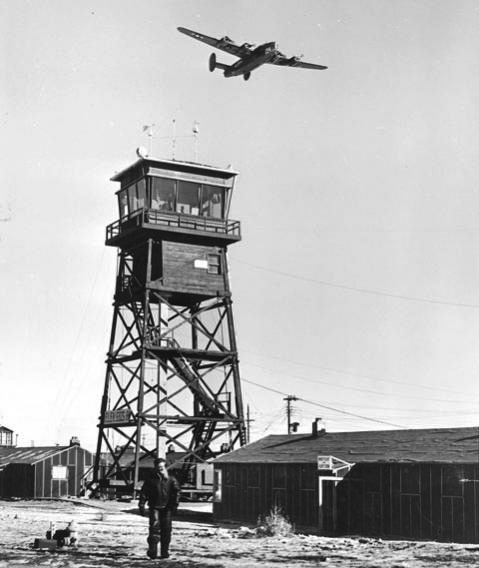 By early 1942, the USAAF had committed to building scores of air bases across the United States. A Chamber of Commerce delegation from Casper, Wyo., traveled to Washington D.C., to lobby for one of these proposed air bases. According to Joye Kading, longtime secretary at the Casper air base, they marketed the “zephyr wind” that whips around the western end of Casper Mountain.

In March 1942, the U.S. Army Corps of Engineers leased the old Casper City Hall at Center and Eighth streets in preparation for the construction of the new Army Air Base at Casper. The site they selected was a high, flat, sagebrush-covered terrace located nine miles west of town on U.S. Highway 20-26 and adjacent to the Chicago, Burlington & Quincy railroad.

Ground was broken in April and a scant six months later, on Sept. 1, 1942, the base received official permission to open for business. B-17 bomber crews began their Combat Crew Training School at the sprawling facility that consisted of four mile-long runways and around 400 buildings.

Six months later, in the spring of 1943, the base transitioned from B-17 to B-24 crew training. Kading recalled, “The base was built to accommodate 20,000 men to be trained. They would come out there, and they were trained to do the last of their training in the B-17s and the B-24s because they could go around the east end of the mountain and hit the zephyrs [west winds] to take them right up to the sky.” She said that by the end of the war, almost 18,000 men had trained at the base.

Along with enjoying the excitement of learning to fly, the pilots faced risks as they gained experience. Kading remembered that there were several plane accidents at the base. She said, “The fellows hit something in the wind that they didn't know how to handle, and they would have a plane wreck and they were lost. A lot of our pilots were in training, and we had some of our planes [that] were wrecked in other states. . . . The soldiers’ bodies were then shipped back home to their families.”

The base grew to almost a third the size of its host city of Casper. Manning the base on an average day would be approximately 2,250 Army Air Force personnel and 800 civilians. They served a constantly fluctuating class body of bomber crewmen. During peak training times, the crewmen increased the base population to more than 6,000. 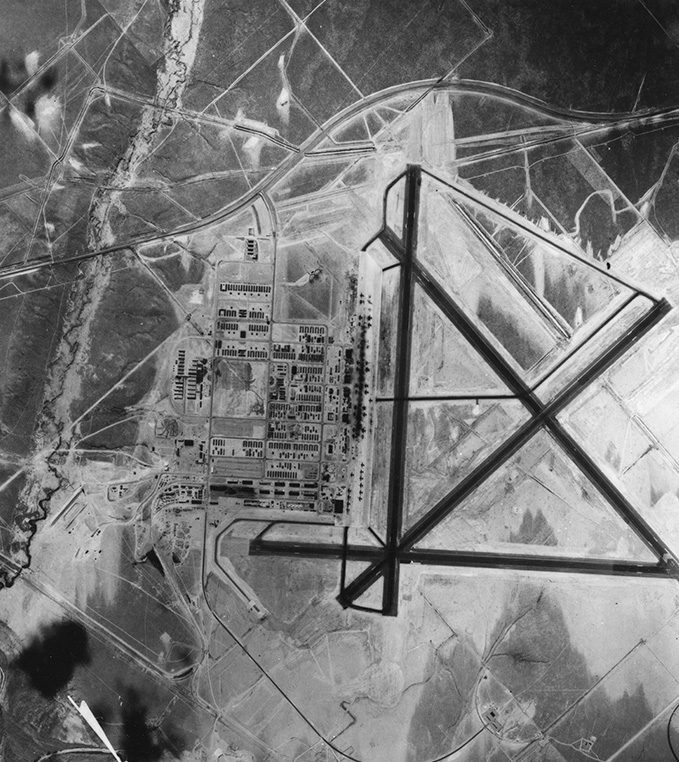 Arriving at Casper typically via train, the newly assembled crews, each consisting of two pilots, a navigator, a bombardier, a radioman, flight engineer and four gunners began a strict regimen of training. According to several personal accounts, some of the crews could not get off the base at all other than when they received a furlough to return home. Others visited Casper regularly and spent time on Casper Mountain or enjoyed hunting or fishing in the area. Comedian Bob Hope also visited the base.

Most of the soldiers who came to Casper were not from Wyoming, according to Casper artist and art historian Eric Wimmer, who researched the creation of a series of murals showing Wyoming history painted by soldiers at the enlisted men’s club on the base. “They served for a short time, and then many soldiers were stationed at another base or sent overseas to fight in the war. This became the driving inspiration behind the concept [Cpl.] Leon Tebbetts developed for painting a set of murals in the Servicemen’s Club,” Wimmer writes. “He planned to give these temporary residents a history lesson on the state of Wyoming before they left.”

In October 1943, Tebbetts and three other soldiers with art backgrounds—J.P. Morgan, William Doench and David Rosenblatt—began work on a series of 15 murals that included American Indians, travel on the trails in pioneer days and other historic subjects.

Many eligible local bachelorettes, as they would have been known at the time, found themselves married to the airmen of the base. Kading met the man who would become her husband when she worked at the base, and she remembered that they often went on double dates and enjoyed dancing. She recalled, “We, the fellows, young--eighteen, nineteen, twenty years old--wherever they went, they liked to date and dance, and they called them the ‘G.I. Wolves’ because they were always looking for girls to dance with. The cartoonists in the newspaper would draw pictures of the men in uniform, but their faces would be wolves.”

The Women’s Army Corps (WACs) also had members stationed in Casper. Kading remembered that they had their own beauty shop and other facilities on the base. “None of 'em [had been] out of their hometowns,” she said, “and when they got to Wyoming, the first thing that they did when they realized that they were in this western state, they had to have cowboy boots and cowboys hats, and tight trousers and everything.” 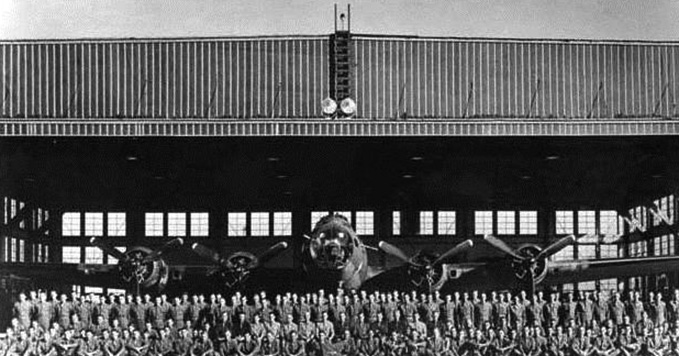 Pilot training was tough: Crews endured countless hours of advanced instruction in navigation, gunnery, bombing, armaments, flight engineering and flying. Training in aerial gunnery, air-to-ground gunnery, formation flying, night navigation, and of course, bombing, were standard. Kading remembered that Maj. Gen. Hap Arnold once visited the base. She said, “He was so thrilled with this base and how it was operated and how careful it was, and how congenial all the people were that were working with one another.”

In one record-setting month, crews flew more than 7,500 hours at Casper Army Air Base. The remains of these activities are scattered across the high plains of Wyoming in the form of spent .50-caliber bullets, shells and links, 100-pound practice bomb fragments and the wreckage of more than 70 aircraft. At the height of training, more than one million .50-caliber rounds and one thousand 100-pound training bombs would be expended per month. 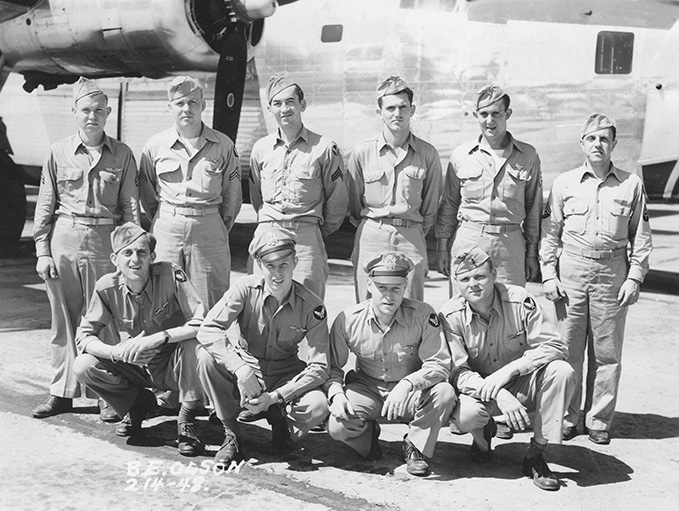 By the end of World War II, at least 16,000 crewmen trained at Casper Army Air Base. One hundred forty Casper Army Air Base aviators perished in 90 plane crashes between September 1942 and March 1945. Most of the crashes were in Wyoming, but many occurred out of state when the fliers were on longer training flights.

The Casper Army Air Base closed in 1945 when the war ended. Today, the site of the old bomber base is largely intact with 90 of the original buildings still standing, including all six of the original hangars. Visitors to the Wyoming Veterans Memorial museum in the base’s former Servicemen’s Club encounter a variety of stories: a gunnery instructor who gained his experience against the Japanese fleet during the Battle of Midway; a base commander who was known as the best machine gunner in the world; and a bomber navigator who was blown out of his B-17 and held prisoner in Germany. In addition, there are accounts of the tragedy of the Casper Mountain bomber crash as well as renowned test pilot Chuck Yeager’s recounted adventures at the base.

The museum archives contain in-depth history. Personal stories of crewmen, staff and civilians are constantly rotated through the air base exhibits and are available for research. Visitors can still view the Servicemen’s Club murals painted by the soldiers. Artifacts in the collection include documents, photographs, maps and several personal items of people who served at the base as well as flying gear, aircraft parts and wreckage.

John Goss has served as director of the Wyoming Veterans Memorial Museum in Casper since 2006. A long military career included time in 2005-06, when his national guard unit was mobilized and sent to Iraq, as deputy commanding officer of an embedded 10-man Military Transition Team with the Iraqi Army’s 2nd Infantry Battalion, 1st Brigade, 1st Division, in the volatile Al Anbar Province. He retired as a major with the Wyoming Army National Guard in 2013.

He holds a degree in anthropology from the University of Wyoming. For five years he and his wife, Lisa, ran a small archeology firm employing up to nine people. He is a lifelong Casper resident with Lisa and their three daughters.

More about Casper at Wyoming Places