Area 12: The U.S. During the Struggle for Civil Rights
Question: How successful was the U.S. in creating a more equitable society?

In October 1969, the University of Wyoming Cowboys football team, ranked 12th in the nation, seemed headed for another championship season. But events just before Wyoming’s game against Brigham Young University brought bitter controversy that swung the national news spotlight onto the university and divided the state. 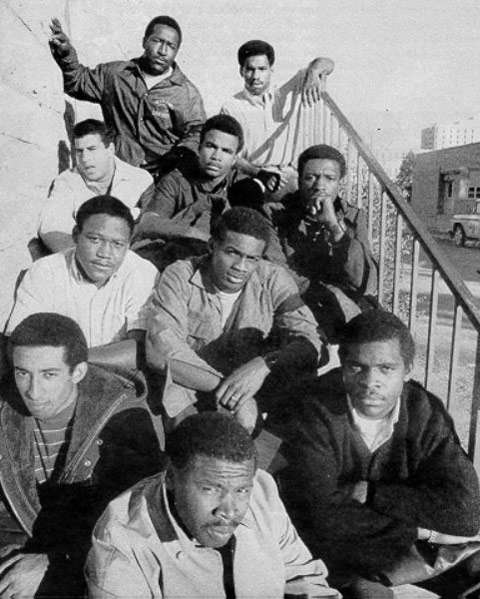 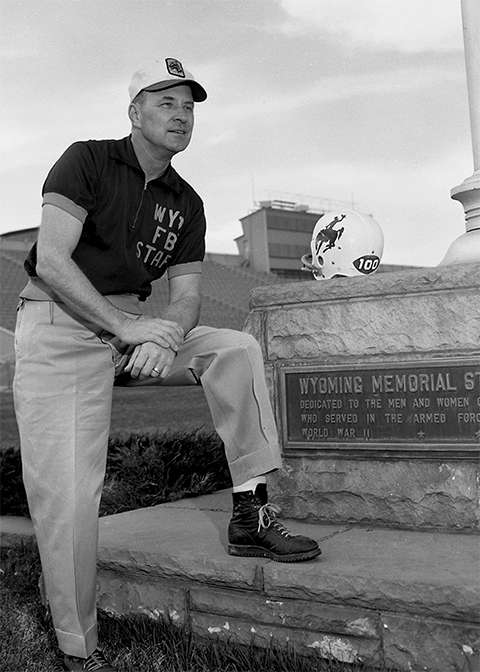 The 1960s saw Americans in frequent conflict over race, civil rights and the Vietnam War. In 1968, U.S. sprinters Tommie Smith and John Carlos linked sports to civil rights and sixties politics when, standing on the medalists’ platform at the Olympics, they raised black-gloved fists as loudspeakers played The Star-Spangled Banner. During that school year, some university athletes in the American West went public with their concerns about policies of The Church of Jesus Christ of Latter-day Saints (the Mormons) barring black men from the priesthood. The athletes protested and boycotted their teams’ games against BYU, which is owned and run by the Mormon Church.

On Wednesday, he presented a BSA statement “Why We Must Protest,” to UW’s president and athletic director, announcing plans for a non-violent demonstration at the stadium prior to the game. On Thursday, Head Coach Lloyd Eaton, then at the peak of a winning career, warned one of the team captains, Joe Williams, about the coach’s standing rule barring players from taking part in any demonstrations. Williams and the black players talked it over that night, and decided to go see the coach about it the next day.

Friday morning, 14 black UW football players showed up at Eaton’s office, wearing black armbands over their street clothes. Eaton led them into the field house, where he railed at them, according to the athletes’ later accounts, refused to discuss the matter and dismissed them all from the team.

After meeting most of the night, the UW trustees at 3:15 a.m. Saturday put out a statement dismissing the 14 from the team but allowing them to keep their scholarships through the end of the semester. On Saturday the Cowboys, without their black players, defeated BYU 40-7 in what Eaton called “the most satisfying [victory] I’ve ever had in coaching.” Undefeated at that point, UW won the next game but lost the last four of the season. National media covered the story; the university community and the state were deeply divided over the issue.

The National Association for the Advancement of Colored People filed suit in federal court against the State of Wyoming seeking reinstatement for the players and damages for violation of their civil rights. In 1971, the court ruled in favor of the state.

In 1970, meanwhile, the team went 1-9, its worst record in 30 years. After the season the trustees announced that Eaton would be moved to an administrative job in the athletic department. He left the university in 1971. The team continued to perform poorly through most of the 1970s.

In 1978, the leadership of the Mormon Church had a divine revelation and opened its priesthood to African Americans.

The selection linked below, “The Black 14: Race, Politics, Religion and Wyoming Football,” offers substantial background on the topic for teachers and for students 8th grade and up, and will be necessary for students to read before undertaking the exercises . The article may be demanding for 6th and 7th graders. 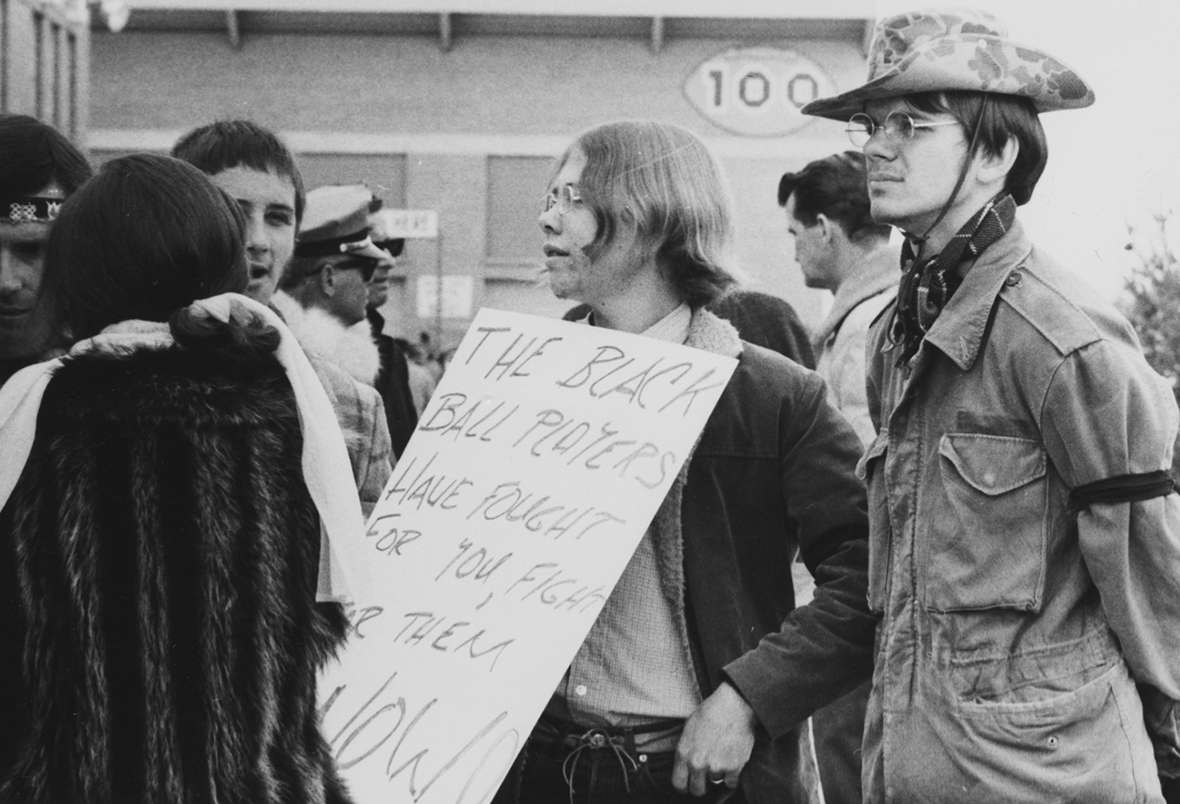 Click on this image of the original typescript of the UW Black Student Alliance’s statement, “Why We Must Protest,” and read it carefully—twice. 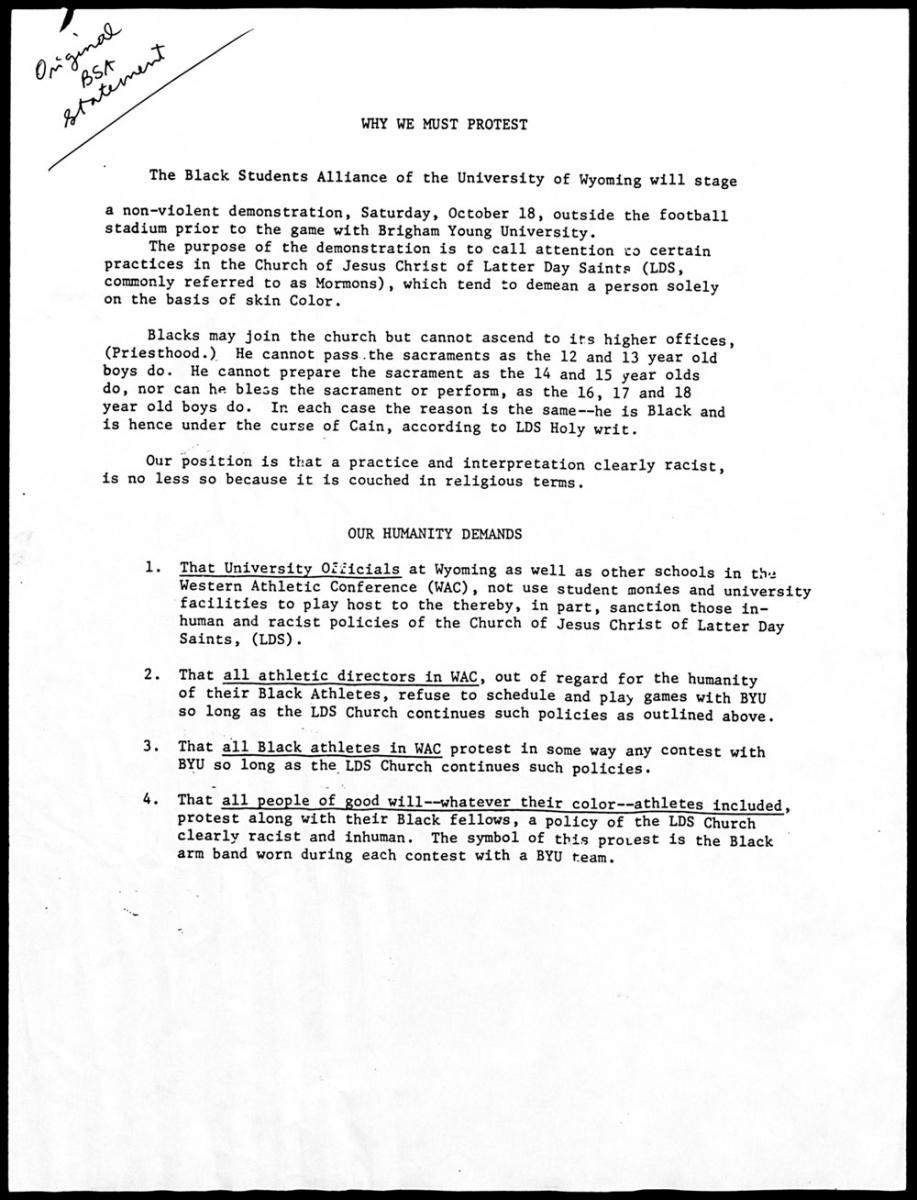 What, exactly, are the students demanding that university officials do? Why do you think they chose to write the statement in the form of demands instead of in the form of requests? What’s the difference? Drawing on your own experiences, which do you think would be more effective? Explain why in a few sentences.

Why do you think they chose to head the list of their demands with “OUR HUMANITY DEMANDS” instead of, say, “We Demand”?

Under the “Our Humanity Demands” section, you’ll notice that the Black Student Alliance is making demands of universities, athletic directors and students throughout the Western Athletic Conference (WAC). In addition to Wyoming and BYU, the WAC at the time included the University of Utah, Arizona State, University of Texas at El Paso, University of Arizona, Colorado State University and the University of New Mexico—all   of which played each other every year in the major sports. What political decision did the students make by including WAC officials in their demands? Why do you think they did that? Explain in a few sentences. Be as specific as possible. Hint: What’s a boycott?

Click on this image of a carbon copy of the statement issued by the University of Wyoming Trustees at 3:15 a.m. Friday, October 18, 1969, after a meeting that had lasted seven hours. 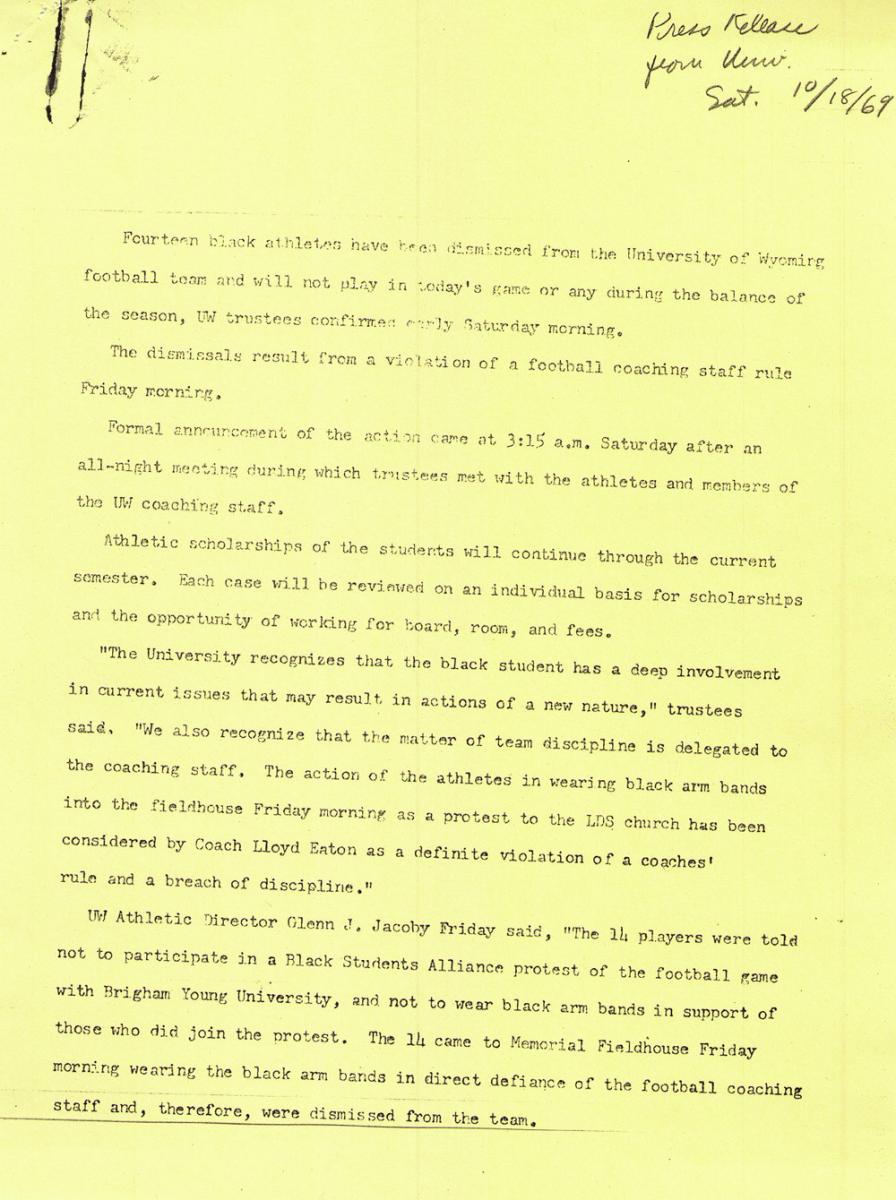 The last sentence reads, “The 14 came to Memorial Fieldhouse Friday morning wearing the black arm bands in direct defiance of the football coaching staff and, therefore, were dismissed from the team.” Having read the article, do you think that is a fair summary of what happened? Why or why not? Explain your answer in a few sentences.

The Wednesday after the BYU game, Coach Eaton and UW President Carlson announced that the UW policy had been changed so that, from that point on, athletes would be prohibited from wearing black armbands only while on the playing field. When reporters asked Eaton if the 14 would have been dismissed if the new version of the rule had been in effect during the game and the days before it, he left the press conference. Do you think that was a fair question? If you had been Coach Eaton, how would you have answered it, or what would you have done at that point? Explain your answer in a few sentences.

3. Act out the drama

In class, choose students to play the roles of key people involved in the Black 14 controversy.

First, assign the roles of Coach Lloyd Eaton, Tri-captain Willie Black and the other 13 players, and Ann Marie Walthall, the woman who happened to be walking across the fieldhouse floor and overheard Eaton’s Friday morning confrontation with the athletes. As closely and fairly as possible, try to imagine what these people would have said and thought at the time.

Write out some of those remarks in a script, and rehearse them. If there’s time, make armbands out of black construction paper or some other material for the athletes to wear. Act out the event, with other students as audience. Improvise, too, if necessary.

Second, assign the roles of some of the people at the seven-hour trustees’ meeting the night before the BYU game: Athletic Director Glenn Jacoby and two or three trustees, perhaps one who favors dismissing the students, another who is opposed to the idea and a third who is undecided—as well as UW President William Carlson, whom Willie Black in his oral history, linked below, describes as a “hand wringer.”

Act out the trustees’ meetings, first, with Coach Lloyd Eaton and, second, with two or three of the players. Then act out the trustees’ and Carlson’s discussions about what to do. Remember, the meeting took seven hours—so there appears to have been a good deal of disagreement.