The T Cross Ranch, formerly known as The Hermitage, is privately owned and is located north of Dubois in Fremont County, Wyo. The site is now and has been historically used for domestic, recreational, cultural and agricultural functions. The ranch is listed in the National Register of Historic Places for highlighting architecture, entertainment and recreation purposes. The ranch sits in the Horse Creek watershed of the Absaroka Mountains and is bisected by Horse Creek. The buildings on the property today stand in tribute to the vernacular craftsmanship of the men who built them long ago. 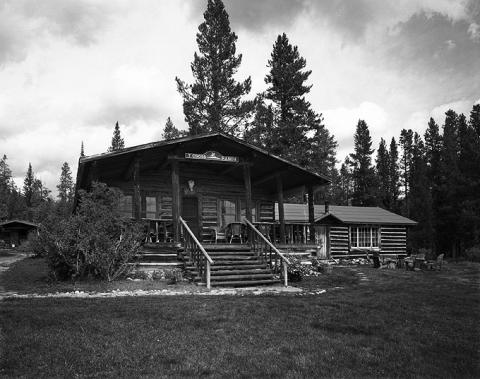 Ernest O. Hadden was the first homesteader on this site around 1900, but was unsuccessful at proving up on this property and filing for homestead papers. He built a cabin, still used today, on the land.

A naturalized German immigrant named Henry Seipt, the next owner, homesteaded around 1919 when he built his first log building on the property. Seipt designed the buildings and land to be used as a dude ranch, according to Susan Berman and Richard McGinity, authors of the document nominating the site for the National Register of Historic Places. He named the place “The Hermitage” and operated the dude ranch for hunting and fishing clients.

Robert S. Cox bought the property from Seipt in 1929, renamed it T Cross Ranch and expanded the dude ranching activities. Cox created the name by taking the “T” for the Tau chapter of St. Anthony’s Society, to which he had belonged at the Massachusetts Institute of Technology, and for St. Anthony’s cross; thus, “T Cross.” It continues to be run as a dude ranch by the current owners.

Seipt began a tradition of facing his cabins east to protect the doors and porches from the harsh weather conditions, a practice Cox continued when he bought the ranch and built more cabins. Seipt also adapted the buildings by extending the gable roofs to protect doorways and window openings from blowing and drifting snow. Most of the log buildings were constructed using saddle-notch or square-notch style.

There are 16 western-Rocky Mountain-style log buildings dating from 1919 to 1946 on the property. There is also a system of irrigation ditches dating from the 1920s and 1930s that draws water from Horse Creek and distributes it across the ranch’s pastures.

One remarkable feature still seen on the land is an unimproved one-lane road used as a driveway into the ranch, one half-mile of which was cleared between 1919 and 1925 by Seipt. Twelve original stone boundary markers dating from the 1926 homestead survey of the ranch site are still visible today.

More history about each building, the history of the Seipt family and the history of dude ranching can be found in the nomination of the site to the National Historic Register. Nominations can be obtained online by searching the following website: http://wyoshpo.state.wy.us/NationalRegister/Search.aspx, or by contacting the Wyoming State Historic Preservation Office at (307) 777-7697.

More about DuBois at Wyoming Places