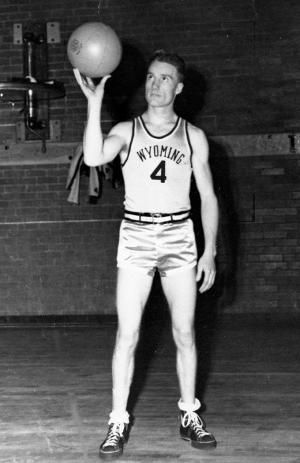 Kenny Sailors, his jump shot, and the Wyoming Cowboys proved they could beat anybody, anytime, anywhere in 1943.

The story of the Pokes' inspiring run to the NCAA basketball championship at Madison Square Garden in the Big Apple actually begins in little Hillsdale, Wyo., during the Great Depression.

When young Kenny and his older brother, Bud, weren't working on the family farm, they could be found shooting baskets with a leather ball at a rusted iron rim on a dirt court, usually through the teeth of a gusting wind. One spring afternoon in 1934, Kenny grew tired of Bud, who had sprouted to 6 feet 5 inches tall, swatting traditional set shots back in his face. So, the 13-year-old with springs for legs made a move that would revolutionize basketball.

"The one thing I could do was jump. I could broad jump and high jump when I was just a punk kid. I had legs on me and I could get up. I won state here in Laramie with a broad jump of 22 feet as a senior," Sailors said, seven and a half decades later. "I thought, ‘that guy is big, and I'm not very big. But I can jump.’

“So I decided to run right at Bud and jump straight up. I leaped as high as I could and shot the ball over him. I don't remember if it was one-handed or two-handed, but I made one."

And so the jump shot was invented—or at the very least perfected—by Sailors, literally on Wyoming soil.

Hank Luisetti, an All-American at Stanford in the 1930s, garnered national attention with a unique one-handed shot, but he didn't leave the floor with both feet.

The Naismith Memorial Basketball Hall of Fame suggests that Glenn Roberts may have been the first to shoot a jumper. Roberts, a Virginian, used a two-handed jump shot in the early- and mid-1930s while in high school and at Emory & Henry College.

Joe Faulks is also considered to be one of the "fathers" of this shot, honing his skills with it as a kid in Kentucky before attending Murray State and then playing from 1946-1962 with the NBA’s Philadelphia Warriors.

But many credible basketball historians and legendary coaches from the era consider Sailors to be the first pure jump shooter.

"I heard of Kenny Sailors," said Jim Brandenburg, Wyoming head coach from 1979-87, who was a schoolboy in San Antonio when the Cowboys were making national headlines in 1943. "Most of the high school coaches in Texas were still teaching the underhanded free throw or the two-handed push shot. We were just starting to develop the one-handed set shot, more the one-handed step shot and the step-back one-hander.”

"We knew about the jump shot,” Brandenburg said, “but we didn't have any coaches that could really teach us step by step, so we could really get into it. We knew that Kenny was one of the guys credited for starting the jump shot."

Coach Ev Shelton embraced Sailors' flashy game from the moment the talented 5-foot-10-inch freshman stepped on campus in Laramie. Shelton, a Naismith Hall of Fame head coach, and Sailors, a three-time All-American (1942, 1943, 1946) guard, guided Wyoming to a 31-2 record during the 1942-1943 season. 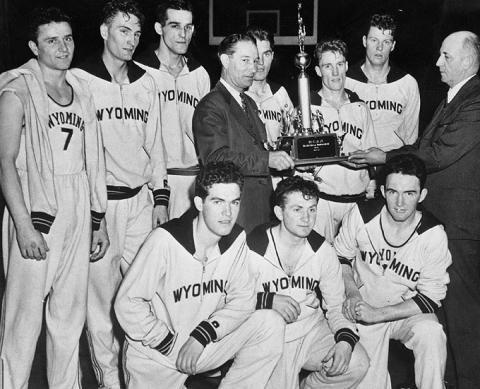 That season for the Cowboys included NCAA tournament wins over Oklahoma (53-50), Texas (58-54) and finally, Georgetown (46-34) in the title game. Wyoming then played National Invitation Tournament champion St. John's at Madison Square Garden to prove once and for all who the best team in the country was. Wyoming prevailed 52-47 in overtime.

Sailors still remembers the feeling of taking the floor in the "World's Most Famous Arena" as if those glory days happened last week.

"Here I am, just a kid off the farm down there in Hillsdale, never been out of the state before, and only 19 years old," Sailors said of his first game at Madison Square Garden. "You can imagine the first time when I went in there. They announce your name when you go on the court, 'Kenny Sailors from Wyoming.'

“And the crowd, they're going nuts. I've never seen anything like it in my life. That's more people than I ever saw in a building in my life. Never even come close to it probably."

"[After the NCAA Championship] we got back to the Laramie train station and the whole town was there, which was only about 8,000 people," Sailors recalled. "We'd seen twice that at Madison Square Garden. Boy oh boy, it was kind of embarrassing because we couldn't go anywhere around Laramie. I went to go buy a necktie, and they gave it to me. I went to buy a meal and couldn't pay for it."

When the cheering was over, Sailors and six of his teammates went off to fight in World War II. College basketball's 19-year-old national player of the year was already commissioned as a second lieutenant in the Marines and was sent to the South Pacific not long after the team returned from New York City to Laramie.

After two years of service, Sailors returned to the University of Wyoming, which due to the war had suspended the basketball program for the 1943-1944 season, to finish his collegiate career in 1945-1946. He played in the NBA, including a stint with the Denver Nuggets, before leaving basketball for an outdoor life with his beloved wife Marilynne.

The Sailors owned the Heart Six Dude ranch in Jackson, Wyo., and then moved to Alaska where they worked as hunting guides for 33 years. When Marilynne passed away in 2002, Kenny moved back to Laramie.

Well into his 90s, Sailors lived in an apartment just steps away from the University of Wyoming’s War Memorial Stadium and regularly attended Cowboys (and Cowgirls) basketball games, where he was treated like a rock star by the Arena-Auditorium fans. He suffered a heart attack in December 2015 and died Jan. 30, 2016. He was survived by his son, Dan, daughter-in-law, Jean, eight grandchildren, 12 great-grandchildren and one great-great grandchild, according to the Casper Star-Tribune. He was 95.

University of Wyoming men basketball team, led by jump-shot hero Kenny Sailors, defeats Georgetown 46-34 at Madison Square Garden for the NCAA championship. Sailors is named the tournament most outstanding player.
Early jump-shot popularizer and three-time All American Kenny Sailors is inducted into the University of Wyoming Athletics Hall of Fame.

Ryan Thorburn is a sports writer at the Boulder (Colo.) Camera with a degree in journalism from the University of Wyoming. He has written three books — Cowboy Up: Kenny Sailors, The Jump Shot and Wyoming's Championship Basketball History; Black 14: The Rise, Fall and Rebirth of Wyoming Football and Lost Cowboys: The Story of Bud Daniel and Wyoming Baseball. For more information: RyanThorburn.com.

Kenny Sailors, All American, on the Jump Shot and his Life in Basketball

The University of Wyoming Athletics Hall of Fame is located in the Rochelle Athletics Center on the Laramie campus, in the north end zone of War Memorial Stadium. Kenny Sailors and the Cowboys' 1943 NCAA Tournament champion team are honored there with photographs and statues.