The JC Penney Company, long among the world’s largest department store chains, traces its roots to a one-room shop in a small Wyoming coal-mining town. The store’s founder was James Cash Penney, a Missourian born in 1875 who had moved west after his doctor suggested his health would benefit from the region’s drier climate. 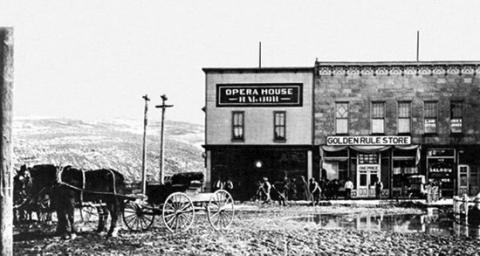 Penney first stopped in Longmont, Colo., where he opened a butcher shop in 1898. His venture depended on purchases by a local hotel. When the straitlaced Penney refused to give liquor to the hotel cook in return for his trade, the butcher shop failed.

Penney then signed on as store clerk at the local Golden Rule Store, part of a small dry goods chain that featured work clothes, fabric, and sewing supplies. His work ethic caught the eye of the chain’s owners, who dispatched him to manage their Evanston, Wyo., store in 1899.

Three years later, on April 14, 1902, they made him a one-third partner in their new store in Kemmerer, Wyo. on the Oregon Short Line Railroad, a subsidiary of the Union Pacific first constructed in 1882 from Granger, Wyo. on the UP line northwest to Montpelier, Idaho. The town had sprung up seemingly overnight after coal was discovered in 1897, and had 1,000 residents by the time Penney arrived. The railroad needed coal, the coal mines needed miners, and the miners and their families needed dry goods. 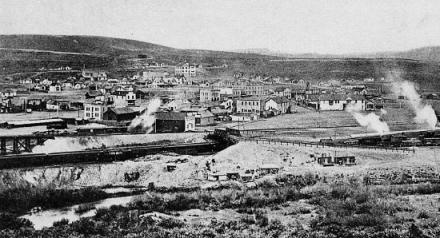 Penney put up $2,000 for his share of the store, an investment that paid off handsomely. Golden Rule sold what mining families needed, and it sold it affordably. In 1902, its first year, the store cleared $8,000 on sales of more than $28,000. It also laid the foundation of a retail empire.

The ambitious Penney began to expand, first within Wyoming, where he opened new stores in Rock Springs and Cumberland, (like Kemmerer, a coal camp on the Oregon Short Line, but now extinct). In 1907, he bought out his partners’ Wyoming holdings and used them as a springboard to open stores in Idaho and Utah, and eventually across the nation. In 1913, he replaced the Golden Rule name with his own. The JC Penney Company was born.

Penney’s business philosophy was simple — find good employees, train them well, and sell quality goods at a small markup in order to keep prices down. The tactic worked. By 1917, the chain had nearly 200 stores; by 1928, there were more than 1,000. Eventually, the number exceeded 2,000 as the store found niches in Main Streets across America. Today, the company operates fewer stores — about 1,100 — but they tend to be much larger than the old Main Street outlets.

Penney grew up in an era in America when agriculture was giving way to industrialization, and he would become part of the movement that saw millions leave farming for urban occupations. His father, James Cash Penney Sr., was a minister and civic leader who ran unsuccessfully for Congress on a populist ticket in 1894. But the elder Penney also ran a 390-acre farm where the family raised both cattle and crops. Penney had hoped to attend college when he graduated from high school in 1893, but his parents could not afford to send him. So Penney stayed on the farm for two years, until his father found him work as a clerk at a local dry goods merchant. Penney took to this new line of work, and began to set aside money to start a business of his own.

Outside his business, his interests mirrored his upbringing — religion, education, and agriculture. He built a retirement home for ministers in Florida, he underwrote vocational guidance programs on the radio, and he raised purebred cattle on his two farms, one in Missouri, the other in New York. He took out bank loans to finance his philanthropy, using company stock as collateral.

That decision cost him dearly when the Depression struck. Much of the collateral was lost. In addition, Penney was personally liable when a Florida bank, where he served as board chairman, failed in 1930; he paid several million dollars to cover losses by bank depositors. As his own financial situation worsened, he was forced to sell one of his homes. It took years to rebuild his fortune.

However, his company fared better during the Depression, thanks in part to its conservative fiscal policies. The company had sizeable cash reserves and no long-term debt. Meanwhile, the chain’s practice of providing quality at affordable price helped to bring in cash-strapped customers. 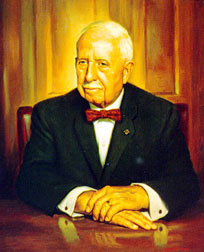 Even so, Penney thought his stores could have done better as the Depression ground on. His column in the May 1932 edition of the company newsletter chastised managers for failing to sell goods that had languished on store shelves for a year or longer. He suggested more persuasive selling practices might have kept sales from falling, even in a dismal economy. “You miss the mark unless you call to the attention of every man or woman that comes into the store that many (of our) lines have been priced lower than they have ever been,” he wrote.

Penney’s success made him a national figure, whose business philosophy and methods provided a model for others to follow. Wal-Mart founder Sam Walton put a copy of Penney’s motto above his desk. It read: “Serve the public…to its ultimate satisfaction.” Wal-Mart is now the world’s largest corporation.

Penney’s influence stemmed in part from his longevity. Typically, the tenure of a top corporate official is short; Penney was at the top of his company for more than four decades. He began his career in an era when cars were still rare on American streets, and ran the company through three wars and the Great Depression before stepping down as chairman in 1958. He continued to serve on Penney’s corporate board until his death at age 95 in 1971. By the time he died, Americans had landed on the moon.

His career in Wyoming lasted just a decade. Thanks to his early success, his company quickly outgrew the state. In 1909, he moved the company’s headquarters to Salt Lake City. Five years later, it moved to New York City. After his death, the company settled in suburban Dallas. But in 1902, Wyoming had provided exactly what young Penney needed to found a chain that has survived, as of 2011, for 109 years – a tiny coal-mining town where the people wanted to buy what he had to sell.

Doug McInnis writes about science, business, and history from his base in Casper, Wyo. He has written for the New York Times, Popular Science and scores of special-interest and university magazines.

More about Kemmerer at Wyoming Places

The J.C. Penney House in downtown Kemmerer, now a museum, was added in 1976 to the National Register of Historic Places. Although visitors only need about an hour to explore this site, it is well worth their time. It is well kept, and the curator is generous with her time as well as knowledgeable about the region’s history. The museum is located at 722 JC Penny Drive, Kemmerer, WY. For more information call 307-877-3164. The museum is open Monday through Saturday from 10 am to 4:30 pm, and Sunday 11 am to 4 pm.