The Huxtable Ranch, also known as the White Creek Ranch, is located south of Glenrock, Converse County, Wyo., and is privately owned. This property is important because it demonstrates Lloyd Huxtable’s thriftiness and conservative style of ranching. He “believed that if you did not have the money, you did not buy it,” according to Nancy Weidel, author of the document nominating the Huxtable Ranch Headquarters District for the National Register of Historic Places. Lloyd and Najma Huxtable were the third owners of this property, but they owned it the longest and made the most improvements on the land and buildings. 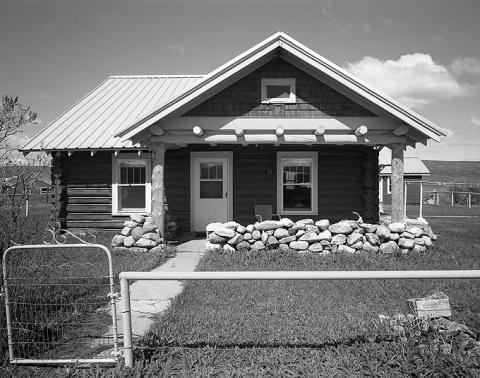 The first property owner was Charles Smith, who homesteaded on this land around 1887. The land was sold in 1896 to Captain and later Wyoming legislator Willard Heber White. Lloyd Huxtable was the manager for White. When White died in February 1929, Huxtable, with the help of his wife’s brother, Charlie Olin, purchased 900 acres and the original 1887 water rights. Within five years, Huxtable bought the surrounding land and expanded the ranch to its current size of 1,500 acres.

Huxtable and his wife, Najma, had four children. He operated the ranch with help from his family when needed and the help of the community for the larger jobs. Because he was careful to avoid borrowing money to purchase equipment and other materials, Huxtable owned his ranch “free and clear” by the late 1950s, according to Weidel. He ran his ranch until his death at the age of 86 on Aug. 26, 1976. Members of the Huxtable family lived there until 1986. Investment manager Kenneth G. Lay purchased the land from a son of Huxtable in 1992 and now owns this property. Lay is a former treasurer of the World Bank.

The log ranch house was built between 1933 and 1935 and has saddle-notched log walls a metal roof, and a stone foundation laid by Olin, who was a stonemason. The small restroom on the west side of the house was added in 1954 and sits on a concrete foundation. Lloyd Huxtable and Dick Maier, a carpenter, and other nearby neighbors, built the stock shed in the early 1940s. The horse barn sits on a stone foundation and was already on the property when the Huxtables purchased the land in 1929, as was the cow barn. Today, there are no modern metal buildings at the site. There are only a few frame structures that were added in the 1950s to replace buildings lost in a fire.

More history about the families who owned this ranch and the history of small ranches may be found in the nomination of the site to the National Historic Register. Nominations can be obtained online by searching the following website: http://wyoshpo.state.wy.us/NationalRegister/Search.aspx, or by contacting the Wyoming State Historic Preservation Office at (307) 777-7697.

More about Glenrock at Wyoming Places