Few issues in the arid West are as contentious or complicated as water rights. Wyoming and Nebraska tangled over rights to the North Platte River as early as the 1880s, disputes that on occasion ended up in the U.S. Supreme Court. It took 11 years to resolve one lawsuit, the Supreme Court finally ruling in 1945 that Nebraska was entitled to 75 percent of the North Platte’s flow, and Wyoming entitled to 25 percent. When Wyoming’s Glendo Dam was authorized in 1944, it would operate under this Supreme Court decree, but there would be further complications. 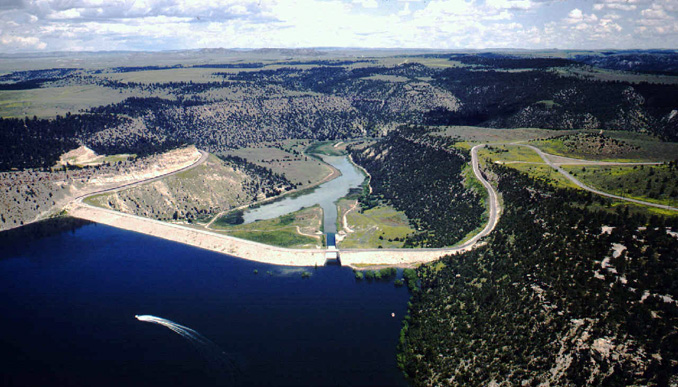 The trouble with the North Platte is its disregard for state boundaries. While the river rises in the snowmelt of the Colorado Rocky Mountains, it flows north into Wyoming, and then curves sharply east, crossing into Nebraska northwest of Scottsbluff. When Glendo Dam was proposed, it was the latest of many dams already ringing the North Platte in Wyoming--Seminoe, Pathfinder, Alcova, and Guernsey (Kortes would be added in 1951; Gray Reef in 1961).

Proposed for a site 25 miles upstream from Guernsey Dam, Glendo was not originally intended to add to irrigation development. Its purpose was to help reduce loss of capacity in Guernsey Reservoir due to silting, when a reservoir’s water volume is reduced by the long-term deposit of mud and silt on its bottom. In addition, Glendo Dam would increase the region’s hydroelectric power by storing water released from upstream power plants, thereby letting those plants operate year round.

Although preliminary investigations for Glendo Dam and Reservoir began in 1944, competing state interests held construction up until December 1954. Nebraska feared Glendo Reservoir would reduce flow into Lake McConaughy at Ogallala, while Colorado thought the additional storage at Glendo might be grounds for it to request the use of more water in the state’s North Park region, headwaters of the North Platte.

It took an act of Congress, Public Law 841, to reveal just how heated a water question could become in the West. No money would be appropriated for any part of the Glendo project, Congress stated, until a definite plan for water use was agreed upon by the three states and approved by Congress.

In 1954, the U.S. Bureau of Reclamation designed a plan that satisfied all involved, and bids for Glendo Dam were opened on November 9, 1954. Glendo Reservoir, all agreed, would be designed to store 800,000 acre feet of water (one acre foot is enough water to cover an acre of land to a depth of one foot). 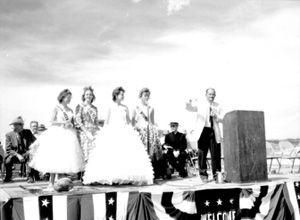 With legal matters settled, the C. F. Lytle and Greene Construction companies began excavation for Glendo Dam in mid-December 1954 and completed the dam in the early fall of 1957. Glendo is an earthfill dam, standing 190 feet high and with a crest length of 2,096 feet. On the south side of the reservoir, nearly a half-mile of dikes were necessary in a low area.

Construction also required relocating three miles of Chicago, Burlington, and Quincy Railroad tracks, and four miles of U.S. 87 (now part of Interstate 25), which runs along the west side of the reservoir. Glendo Dam and its power plant, situated on the North Platte River, are part of the Bureau of Reclamation’s Glendo Unit of the Pick-Sloan Missouri Basin Project.

Glendo Dam is about 100 miles north of Cheyenne, WY. Follow Interstate 25 north to Exit 111 into the town of Glendo. Turn right on A St. and drive the few blocks to Lincoln Ave. Turn right onto Lincoln, which becomes Glendo Park Road and proceeds to the dam. A trail to the north offers a scenic overlook of the dam and reservoir.

For more information on Glendo Dam, click here for the Bureau of Reclamation's Glendo Dam website. For recreational opportunities at the reservoir, see the Bureau of Reclamation's Wyoming Lakes and Reservoirs website or visit the Wyoming Department of State Parks and Cultural Resources site on Glendo State Park, for detailed information on camping, boating and fishing opportunities.

In addition to recreation, the department oversees cultural sites in the park, which include visible tipi rings. Glendo State Park charges a daily use fee ($6 for non-residents; $4 for residents).