The Durlacher residence at Fifth and Custer streets in Laramie, Albany County, Wyo., is located in a residential district two blocks east and two blocks south of the corner of Third Street and Grand Avenue, the town’s central intersection. The house is now privately owned and used by a financial institution. Historically, the house was a residence and later a religious facility for the First Christian Church and the Salvation Army. 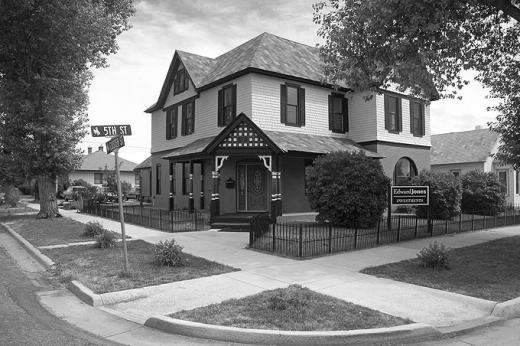 The architectural style is late-Victorian Queen Anne. Many original features remain on the house, such as the large arched window in the west façade and several stained glass windows. Architect Charles Klingerman built the house in 1878 for the Simon Durlacher family. When Simon’s wife, Hannah, died in 1930, the Durlacher ownership came to an end.

Simon Durlacher arrived in Laramie in April 1868, the month before the Union Pacific Railroad first came to town. He had worked as a clothing merchant in the East. Durlacher’s family came from Germany, settling first in Pennsylvania and later in Iowa. Durlacher was a Civil War veteran, wounded at Gettysburg. In Laramie, he worked for Ben Hellman as branch manager of Hellman’s clothing store there. In 1871, Durlacher partnered with William Manesse to operate a men’s clothing store where they also sold tobacco and jewelry.

Durlacher soon became known as a prominent citizen of Laramie. He was active in the Masons and, in 1874, he served as an Albany County commissioner. His house is a “testament for the success of his business,” according to Carly-Ann Anderson, author of the document nominating the site for the National Register of Historic Places. Often, the houses built in that neighborhood by early Laramie residents displayed the “affluence and prominence of the owners within the community of Laramie, more so than location.”

The Durlacher house dominates the corner of Fifth and Custer streets, a residential neighborhood. Originally built of brick, this two-and-a-half-story house is now partly covered in stucco on the lower story. About half of the original wood windows remain on the building; most of the replacement windows also are wood-framed. The front porch continues to be an important feature as it projects diagonally from the corner towards the northwest. This building was designed as a house, used for a church and now is used by a business, although it still looks like a house from the outside. This contributes to the neighborhood’s charm and ambience.

More history about ­­­the growth and development of Laramie and the history of the Durlacher family may be found in the nomination of the house to the National Register of Historic Places. Nominations can be obtained online by searching the following website: http://wyoshpo.state.wy.us/NationalRegister/Search.aspx, or by contacting the Wyoming State Historic Preservation Office at (307) 777-7697.

The Durlacher House is located at 501 South Fifth St., Laramie, Wyo. Although the building is currently used by a private business, visitors may view the structure from the outside.