From Bootblack to Congressman: the Career of Teno Roncalio

From Bootblack to Congressman: the Career of Teno Roncalio

Teno Roncalio burst into Wyoming politics in the late 1950s. An energetic, ambitious attorney, he was the last Democrat to date to serve Wyoming in Congress.

Roncalio was elected to five non-consecutive terms in the U.S. House of Representatives, the first in 1964. During his ten years in office he played a key role in the passage of bills important to Wyoming, such as the Surface Land and Reclamation Act and the increase in Wyoming's share of mineral royalties. 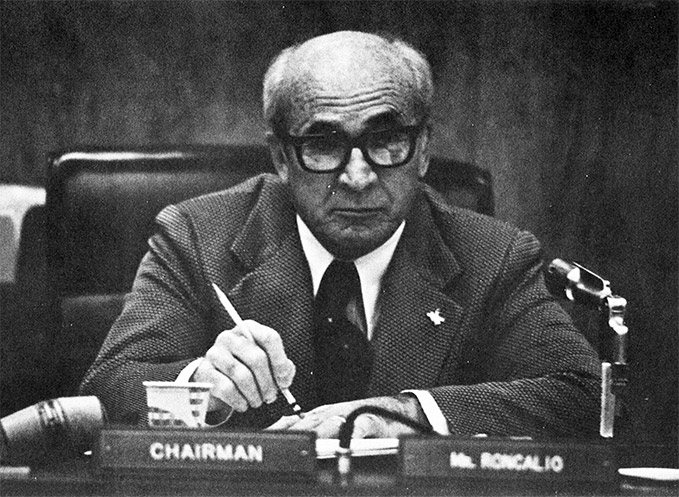 Roncalio was an early opponent of the Vietnam War, a position contrary to that of many of his Wyoming constituents and his Congressional colleagues. But his own war record—an impressive one—shielded him from attack by the hawks at home or in Congress.

He was born March 23, 1916, in Rock Springs, the eighth of nine children. His parents, Frank and Ernesta, named him Celeste Domenico Roncaglio. They later dropped the "g" in their surname. The diminutive of Celeste is Celestino, which was shortened to "tino," and Teno became his name from childhood on. Frank Roncalio worked in the coal mines in Rock Springs and was a junk dealer; Ernesta Roncalio ran a boardinghouse.

An ambitious, happy child, Teno's first job was at age 5 when he delivered produce from a two-wheeled pushcart for the Ogden Commission, a wholesale produce company.

At 6, he worked as a bootblack, or shoe shiner, in a barber shop. He appeared in amateur shows where he sang and played the concertina. When a movie scout came to Rock Springs, Teno tried out for the Our Gang comedy series, but lost out to Pinky Daniels who had more freckles and was "homely."

At age 17, Teno took the state barber’s exam, received his license worked in Jim Vicars' shop. After high school, Roncalio worked as a reporter and advertising salesman for the Rock Springs Rocket- Miner for several years before he enrolled at the University of Wyoming.

Ever the entrepreneur, he and Rock Springs friend and fellow student Frank Larrabaster made duplicates of UW basketball schedules and sold advertising to go with them to help pay for their college expenses. Roncalio also ran a snack bar in a dormitory, waited tables, washed dishes at Annie Moore's boardinghouse, tended furnaces, shoveled snow and scrubbed floors.

During his second year at UW, he was elected student body president and served as business manager of the student newspaper, The Branding Iron. He also joined the Young Democrats and caught the attention of state Democratic leaders. One of them, U.S. Sen. Joseph P. O'Mahoney, offered him a job in Washington, D.C. in 1941. He attended night classes at law school at Catholic University after O'Mahoney found him a patronage day job working in the Senate library as a researcher.

The Pearl Harbor attack in December 1941 interrupted his career drive. In March 1942, Roncalio enlisted in the U.S. Army, attended Officers' Training School and was sent to North Africa with the18th Regiment of the 1st Infantry Division, later known as “The Big Red One,” “The Bloody First” or, in a gallows-humor reference to its high casualty rates, “The Big Dead One.” He fought in campaigns from North Africa to Italy, France and Germany.

Roncalio received the Silver Star for gallantry in action during the battle for Omaha Beach on D-Day. He was honorably discharged with the rank of captain.

Following his graduation in 1947, he moved to Cheyenne, established a private law practice, became an assistant county attorney and founded several banks.

In 1950, he began working as editor of the Wyoming Labor Journal and entered politics actively. In 1957, he became chairman of the Wyoming State Democratic Party. At some time that year, during a trip to Washington, D.C., Roncalio visited the office of Sen. John F. Kennedy of Massachusetts, a potential presidential candidate.

Roncalio slapped his card down on Kennedy’s desk and announced that he was the Democratic chairman in Wyoming. "We've got 15 votes. Ten of them are yours now, and I'll do what I can to get the other five," he said. 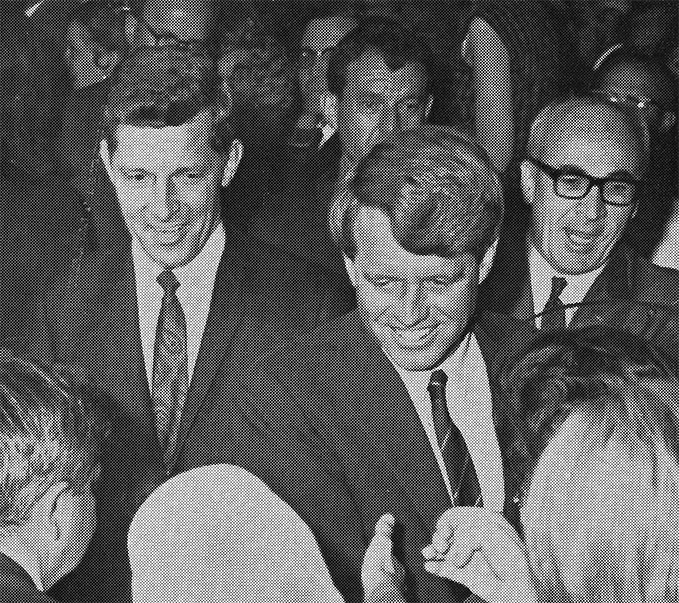 At the 1960 Democratic convention, television viewers saw a jubilant Ted Kennedy slapping Roncalio's back as Wyoming's votes secured the nomination of John Kennedy as the party's candidate for president.

After John Kennedy won the presidency, he appointed Roncalio chairman of the U.S. International Joint Commission on U.S. and Canadian Waterways. The ambassador-rank post guaranteed him access to the Kennedy White House when he needed it.

In 1962, Roncalio surprised his friends when he ended his bachelorhood at age 46 and married Ceil Waters Domenico and became stepfather to her four children. The couple later had two sons, Frank and John.

The House of Representatives

But the 1960s proved a political rollercoaster ride for Roncalio. In 1964, he made his first run for U.S. Representative and defeated Republican incumbent William Henry Harrison by about 2,000 votes. Two years later, Roncalio became a candidate for the open U.S. Senate seat being vacated by Republican Milward Simpson, who retired. Robert Kennedy campaigned for Roncalio in Casper, but even with such stellar help, Roncalio lost the general election to Gov. Cliff Hansen by 4,407 votes.

Kathy Karpan, then 22 years old and a recent University of Wyoming graduate, was Roncalio's press assistant. A Rock Springs native and a Democrat, Karpan went on to serve two terms as secretary of state but lost her bid for governor in 1994. She currently practices law in Cheyenne. Of Roncalio’s loss, she said, "Teno put up one heck of a struggle. That was the most brutal defeat that I have been associated with. More than my own. I was young, heartsick. We had been doing so well."

In 1970, Roncalio ran again for the U.S. House and defeated state Superintendent of Public Instruction Harry Roberts by only 612 votes after a recount. Back in office, Roncalio asked Karpan, then attending graduate school at UW, to work with him. She agreed.

"Kathy, I want you to keep in mind that every other person out there did not vote for me so we can't be the big liberal," Roncalio told her. Karpan said she was a little hurt by his remark because she never thought of herself as a big liberal.

In 1972, U.S. Rep. Roncalio was in a desperate fight for re-election and Sen. Ted Kennedy came to Wyoming to help him. Roncalio prevailed over Republican challenger William Kidd. It was a big win for him, especially given that Republican President Richard Nixon, running for re-election that year, received an overwhelming 70 percent of the Wyoming vote.

Roncalio was re-elected again in 1974 and 1976. He was not a candidate for re-election and resigned his seat in December 1978.

After he left office, he served for four years as the first special master—a hearing officer who reported back to the court—in the tangled lawsuit over water rights in the Bighorn River, in which litigation lasted more than 35 years.

Teno Roncalio's major accomplishments during his ten years in Congress included passage of the Surface Mine Reclamation Act in 1977. The law gave the states control over surface mining reclamation within their borders. Still in effect today, the legislation requires that companies post reclamation bonds as mining progresses to ensure the mines will be properly reclaimed once mining stops. The law has resulted in millions of dollars for reclamation in the state, including work on subsidence in Rock Springs caused by the collapse of old underground coal mines. 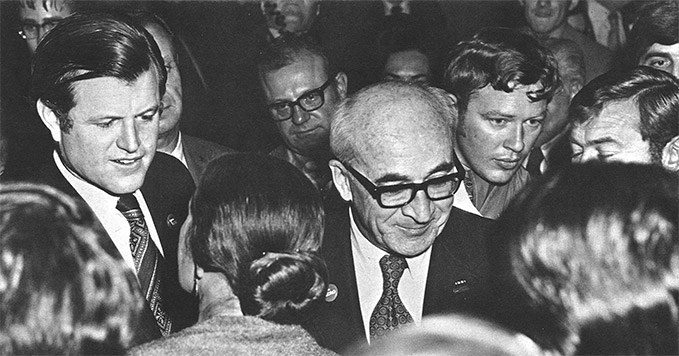 Working with Sens. Gale McGee and Cliff Hansen, Roncalio shepherded through the U.S. House the bill to increase Wyoming's share of federal mineral royalties from 37.5 percent to 50 percent. The change in royalties--paid on mineral production from federal land in the state--has brought in hundreds of millions of dollars over the years.

As a key member of the House Atomic Energy Committee, Roncalio played a key role in the collapse of plans for the Wagon Wheel project in the Pinedale area.

The project, part of the Plowshare Program, initiated after World War II to help the United States develop nuclear energy for peaceful uses, would have allowed the detonation of a series of nuclear explosions deep underground in Sublette County to free natural gas trapped in tight underground rock formations in the Pinedale area. Although Roncalio's opposition failed to cut off funding for the project, the Atomic Energy Commission, faced with strong opposition from Wyoming residents in that area and from national environmental groups, let the project die quietly.

Roncalio was fast-talking, friendly and warm. He also was quick-tempered.

In the early 1970s, young volunteers working on Ralph Nader's Congress project visited Roncalio in his office in Washington, D.C. The ambitious project, subtitled "Citizens Look at Congress," resulted in a report on the finances of every member of the U.S. House of Representatives. Although Roncalio—then in the second year of his two-year term in office—supported Nader's project, he was gruff with the young questioners.

He grumbled about having to run for office every two years and the low pay. When asked to show records of his financial holdings, he opened the drawer of a walnut cabinet in his office. Unable to find what he was looking for, he became exasperated.

After every folder had been opened, Roncalio said, "I believe a man's financial records are the most personal, private part of his life, and I think it is highly insulting that you come in here and ask to see them." White added, "He later apologized, said he hadn't been feeling well that day, and offered us Wint-O-Green mints, Coke and coffee."

Roncalio died in Cheyenne on March 30, 2003, of congestive heart failure. He was 87 years old.

Joan Barron covered state government and politics as a reporter for the Casper Star Tribune for 45 years. She retired in late March 2014 and continues to write a weekly column for the same paper.

The Mineral Leasing Act of 1920: The law that changed Wyoming's economic destiny
Leasing Federal Minerals in Wyoming and the West
Kathy Karpan: A Life in Law and Politics
Bombardier Conservationist: Tom Bell and the High Country News
Pro-war yet pro-dissent: U.S. Senator Gale McGee of Wyoming

The U. S. Post Office at 2829 Commercial Way in Rock Springs, Wyo., was renamed the Teno Roncalio Post Office Building in 2002

The Rock Springs Historical Museum is the former town hall and jail, built in 1892, and is located in downtown Rock Springs at 201 B St. From I-80, take the Elk Street exit, No. 104, and follow Elk Street south to downtown. Take the bridge across the U.P. Railroad tracks where it turns into A Street. At the end of the bridge, take a left on Broadway. The museum is on the right at the corner of Broadway and B. Hours are Monday through Saturday from 10 a.m. to 5 p.m. The museum includes a bookstore and gift shop and also offers an interesting walking tour. Admission is free but donations are accepted.