The Railroad and Wyoming

The Railroad and Wyoming

Area 5: The United States During Reconstruction (1860s-1870s)
Question: How did the Western region of the U.S. respond to challenges of Reconstruction?

After the California gold rush began in 1849, the need for a transcontinental railroad grew steadily through the 1850s. Plans stalled, however, because of tensions between North and South over the expansion of slavery into the West. Not until after the South seceded and the Civil War began was Congress able to approve government support for construction of a railroad. President Abraham Lincoln, with no southern votes left in Congress to oppose the idea, chose a northern route that ran west from Omaha, Neb. With funds from government loans, government land grants and high-pressure private financing, the Union Pacific Railroad began construction. 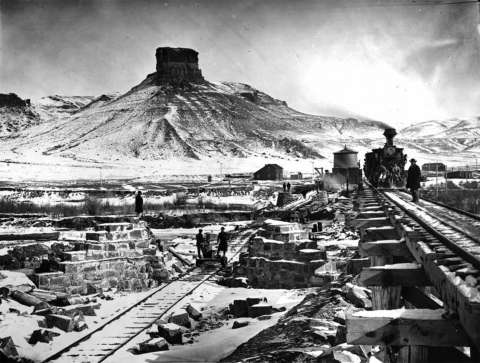 Track laying began in 1866, the year after the end of the Civil War. The line reached Cheyenne late in 1867 and Evanston by the end of 1868. In May 1869, the Union Pacific met the east-building Central Pacific in Utah Territory at Promontory Point. As the UP line built west, the booming, lawless construction economy moved with it, fueled by thousands of railroad workers and the merchants, gamblers, prostitutes and thieves happy to take their money. Each end-of-tracks town in succession won the nickname Hell on Wheels.

Soon it became clear that a new territory was needed; Dakota Territory was too large, its capital at Yankton too distant. Congress established Wyoming Territory. Shortly after arriving in Cheyenne in June 1869, Gov. John Campbell noted that this was the first time establishment of a territorial government “was rendered necessary by the building of a railroad.”

Wyoming’s principal institutions were all located in the towns as well: the capital in Cheyenne, university in Laramie, state prison in Rawlins and state hospital in Evanston. Non-Indian settlement began to move north from this so-called southern tier of settlement along the railroad. That southern tier would wield its political power—much of it based on the votes of railroad workers and miners connected to the Democratic Party—far into the 20th century.

The question of slavery’s future in the West had brought the nation to the brink of civil war. Reconstruction, after the war, left control of politics and finances in the hands of the victors. The Union Pacific was built by engineers who had all been Union Army officers and was financed, in part, by capitalists who had profited from the war. The railroad, as Gov. Campbell noted, made Wyoming Territory a political necessity. Wyoming, in its political geography, economy and culture, was therefore a creation of the Union Pacific Railroad. The Union Pacific, in turn, would never have come about if the nation had not first torn itself apart, and then faced the task of reassembling—Reconstruction.

The article linked below, “Industry, politics and power: The Union Pacific Railroad in Wyoming,” offers substantial background on the topic for teachers and for students 8th grade and up. The article may be demanding for 6th and 7th graders.

Exercise 1 asks that students analyze and compare a photograph and a drawing of an end-of-tracks railroad town. Exercise 2 sends students to an issue of a newspaper published along the tracks in 1868. Some topics in the photos and the newspaper may be sensitive, including prostitution and racial conflict.

Read "Industry, Politics and Power: The Union Pacific in Wyoming"

1. Here are a photo and a line drawing of the so-called Big Tent, when it was located at Benton, Wyoming Territory. The tent was a 50-feet by 100-feet canvas saloon, dance hall and brothel that moved west with the end of tracks. During the summer of 1868, Benton was the end-of-tracks town for the Union Pacific Railroad as it was built across Wyoming Territory. 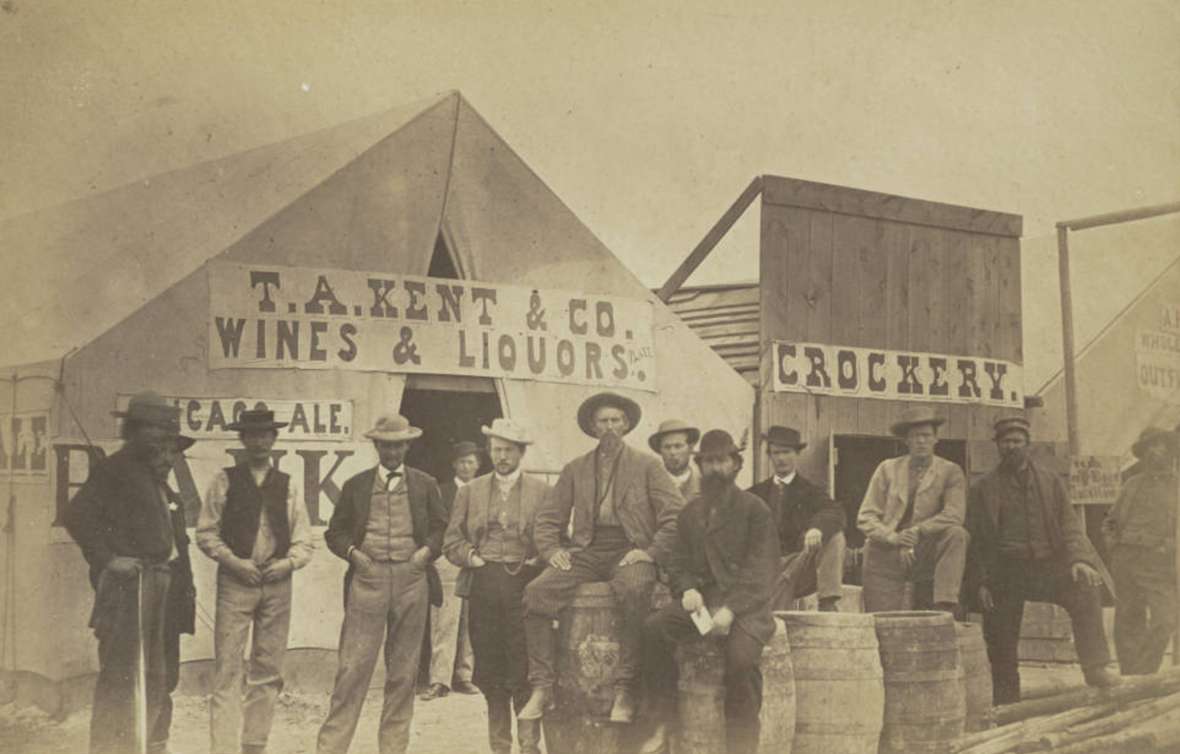 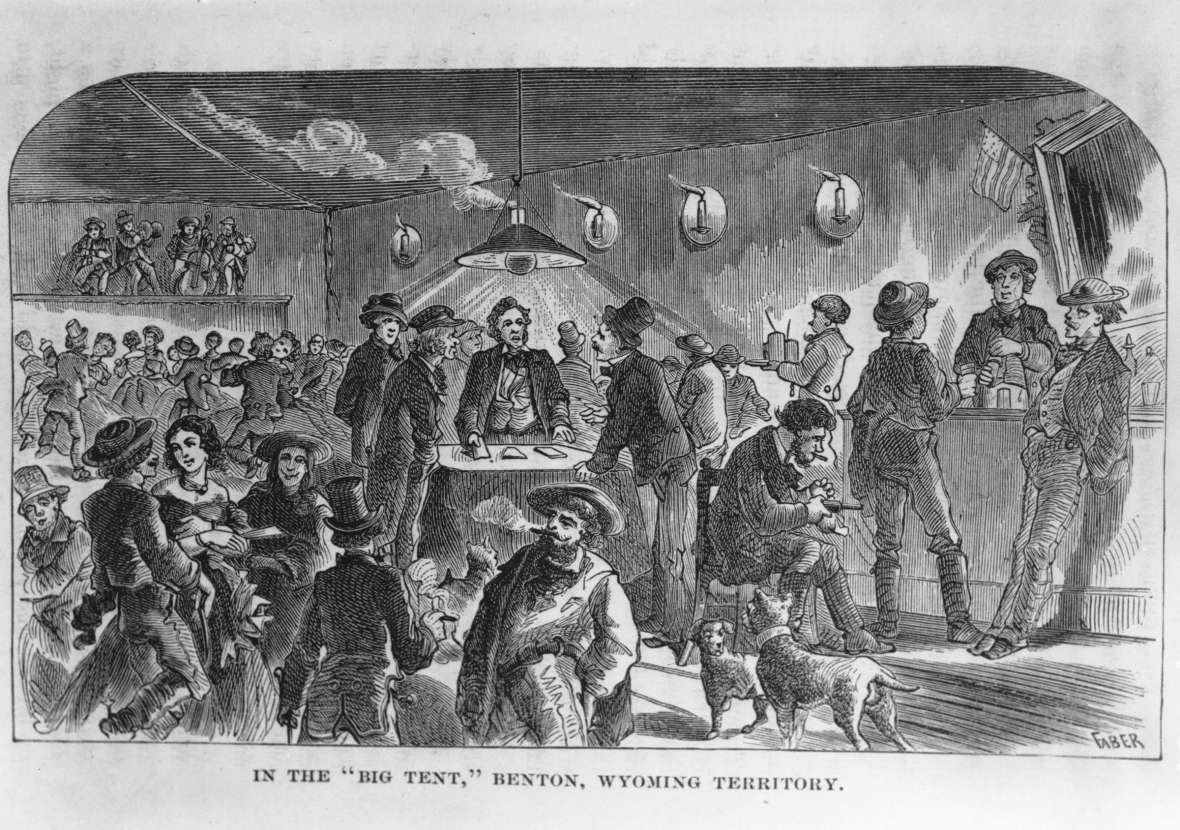 How many women can you count in each of the two images? Write a brief essay comparing and contrasting the pictures. Use examples from the pictures to defend or explain your answer.

2. On the Wyoming Newspapers website, read the description of the end-of-tracks town of Benton in the Frontier Index, August 11, 1868. The newspaper’s press and type could be moved by rail or wagon, and the paper was published in a succession of end-of-tracks towns along the route of the Union Pacific. The passage is part of a longer description of a journey from Laramie west to Green River as the newspaper moved its base of operations and as construction was underway. The description of Benton begins on page 1 near the bottom of column 4.

Here’s how to do it: Go to the Wyoming newspapers website, http://newspapers.wyo.gov, click on the link on the left side, near the top: “Enter Wyoming Newspapers Database Here.” This will take you to a page with links in the center. Under “Browse All Wyoming Newspapers by:”, click on “newspaper name.” This will link to an alphabetical list of newspapers. On page 2 of this list (change pages by clicking on the page numbers displayed at the top), click on “Frontier Index.” This will display a page showing “1868” next to a folder icon; click on that, and follow the same procedure for subsequent pages that should first offer you the option of month (select August), then day (select 11th). This page should display links to four newspaper pages for the Aug. 11, 1868, Frontier Index. Click on each link to view that page. If these individual newspaper pages don’t load within 30-60 seconds, try again later. Read at least three pages for August 11, 1868.

The Frontier Index reflects Reconstruction-era politics. By August 1868, Ulysses S. Grant, a Republican, was running for president; the newspaper strongly opposed him and the policies he stood for. In particular, the Index seems to have opposed Republican policies extending the vote and due process of law to the enslaved people who recently had been freed. The paper's nicknames for Grant include “Horse Useless Grant" and "Ulysses Slaughter Grant." Can you find any hints of the newspaper’s attitude towards African-Americans in the description of Benton? Use examples from the text to defend or explain your answer.

Read the other two pages of the August 11 edition of the Frontier Index, or browse other issues as well. What other hints do you find of the editors’ politics? What hints do the advertisements give you about the local economy? Use examples from the text to defend or explain your answer.

Industry, Politics and Power: the Union Pacific in Wyoming