Grace Hebard and the Wyoming Home Front in World War I

Grace Hebard and the Wyoming Home Front in World War I

“It will probably prove to be the greatest war known in history” –W.E. Chaplin, editor, Laramie Republican, August 1914

While much of the world was fighting a vast war—the Allied powers of Great Britain, France, Italy, Russia and Japan, against the Central Powers of Germany, Austria-Hungary and the Ottoman Empire—America, at first, stayed neutral. War had broken out in Europe in August 1914 after the assassination of the Austrian Archduke Ferdinand. For two and a half years, the United States stayed neutral and President Woodrow Wilson was re-elected in 1916 on the slogan, “He kept us out of war.”

In March 1917, however, the British government turned over to the Americans an intercepted telegram, authored by German Foreign Secretary Arthur Zimmerman, which called on Mexico to join in against the United States with the promise of the return to Mexico the territory it had lost in the war of 1846-1848. After that provocation, American involvement seemed inevitable.

At Wilson’s request, Congress declared war against the Central Powers on April 6, 1917. The greatest challenge for the Wilson administration and the nation became how to raise and train an army and mobilize the support of the people. At the same time, the nation faced large changes related to suffrage, immigration, and alcohol prohibition.

The Wyoming Legislature eagerly supported the declaration of war.  Even before Congress had acted on military conscription, Wyoming’s legislature passed a resolution supporting a draft and commending Wilson for severing diplomatic relations with Germany. On March 26, 1917, the Wyoming National Guard was ordered up to federal service. After war was declared, the Wyoming troops trained on the East Coast and were sent to France beginning in December 1917. All told, about 12,000 Wyoming men served—about 6 per cent of the population—a rate well above the national average.

Reports of mass meetings, flag displays, and resolutions in support of President Wilson filled the newspapers. Waves of propaganda washed over the nation and the state. Along with the rest of the nation, most Wyomingites responded to the call to support the war effort.

Social pressure to join in patriotic displays and to buy war bonds intensified. War bonds were a way for people to lend money to the government to fight the war. People with German names came under the suspicion of their neighbors. In an extreme display, war supporters burned all of the German texts at Lander High School at an intersection in the center of town.

At the same time, people ate less and grew more of their own food. Women were central to the efforts on the home front in Wyoming.  They worked in jobs that were once dominated by men, pledged to conserve food, devoted time to knitting wool hats and socks for soldiers, prepared bandages for the Red Cross and collected tens of thousands of books for the servicemen serving in France.

Among the most interesting and energetic of people in Wyoming who organized war support was Dr. Grace Raymond Hebard of the University of Wyoming.  Hebard was a passionate and devoted defender of the cause.  Civil engineer, librarian, athlete, professor and historian, Hebard was a woman of broad talents--a Renaissance woman--who first served the university in the 1890s, both as secretary and member of the Board of Trustees, wherein she handled the University’s finances.  She freely admitted that “the Trustees gave me a great deal of power, and I used it.”

When World War I broke out she also taught citizenship classes for immigrants on the Constitution, patriotism and U.S. history. Her devotion to her state, her unceasing energy and unfailing patriotism qualified her superbly to answer the call to promote wartime programs and rally support for the cause in Wyoming, most particularly among women.

The articles linked below, “Life on the Home Front: Wyoming During World War I” and “Grace Raymond Hebard: Shaping Wyoming’s Past,” offer substantial background on the topic for teachers and for students 8th grade and up. The articles may be demanding for 6th and 7th graders. Caution to teachers: Some students may be sensitive to the topics of adultery and murder mentioned in “Life on the Home Front.”

Read "Life on the Home Front: Wyoming During World War I"

The following exercises will allow you an opportunity to explore Hebard’s efforts supporting the nation’s cause in World War I—in the context of other war efforts around Wyoming and the nation. The first article tells what Wyoming was like during the war. The second details Hebard’s professional life at the University of Wyoming, concentrating on her controversial status as a historian.

The exercises offer a chance to examine her letters and other documents now archived at the American Heritage Center at the university, along with posters from the propaganda efforts promoted by the Wilson White House throughout the nation. The documents will bring you close to Hebard and her time.

1. At the American Heritage Center’s digital site, view the folder titled “World War I-War Work, Correspondence, News Clippings, 1917-1918.” This folder contains correspondence and news clippings about her war work that Hebard carefully saved. Click on the image of the folder to get to the web page where you can view the separate pages of the document. Begin viewing these pages by clicking on “Open book in full view.” You can then display individual pages by either clicking on the thumbnails (far left) or on the “flip right/left” arrows in the small display near the upper right side of the screen. Zoom in/out icons are on the upper left. Read some of the news clippings, especially those headlined “War-Time Service Urged upon Women,” “Cleaning the Dining Plate” and “Dr. Hebard Urges Americanization of Aliens.”

Once you have completed reviewing these materials write a brief essay that touches highlights of Grace Raymond Hebard’s work on behalf of the war effort in the context of war work by women in general. What ideas seemed to be central to the promotion of home front efforts in support of the war? Use examples from the letters or news clippings to defend or explain your answer.

2. Visit “On the Homefront: America during World War I and World War II” on the Library of Congress website at: http://www.loc.gov/teachers/classroommaterials/presentationsandactivities/presentations/homefront/gallery.html.  Identify three World War I posters from this collection that you think best fit with the propaganda that was used to promote the war to the American people.  How may these three posters help you to better understand the home-front activities that individuals like Grace Hebard engaged in?  See three of the posters, below. 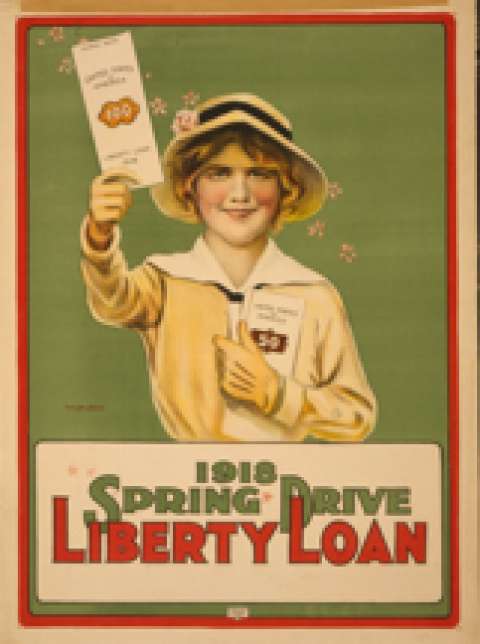 Liberty Loan Drive
Mobilizing a nation for war is an expensive undertaking. Citizens were encouraged to loan money to the government through the purchase of war bonds. This 1918 poster promoted the purchase of Liberty bonds during one of four World War I government initiated war bond drives. Fundraisers promoted bonds as a patriotic duty and even children participated by collecting change to buy war stamps. 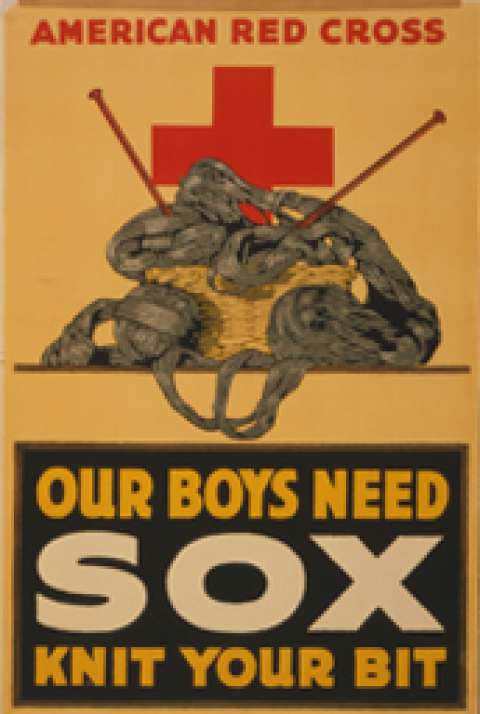 Our boys need sox
The American Red Cross is well known for its wartime support efforts. The Production Corps, one of its most popular volunteer units, was organized in 1916 to make surgical dressings and clothing for both war refugees and our own troops. “Comfort items” such as hand-knitted socks, sweaters, soap and razors were also requested for the men. Between 1917 and 1919, over 370 million relief articles were produced by adult and junior Red Cross Production Corps members. This World War I poster recruits volunteers to join a nationwide knitting campaign sponsored by the Red Cross to supply soldiers and civilians with warm clothing. 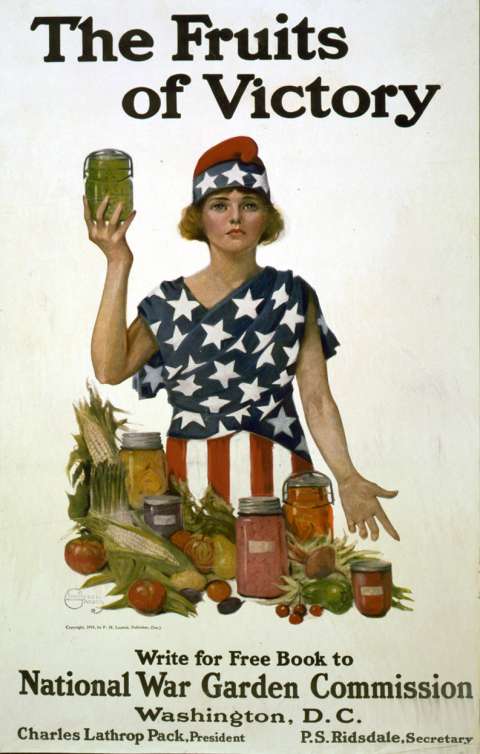 The fruits of victory
Feeding overseas forces during World War I caused food shortages on the home front. In addition to rationing, the government encouraged families to plant war or “victory gardens” to supplement the nation’s food supply. The National War Garden Commission was created to help citizens learn how to plant gardens and conserve food by canning and drying. This 1918 poster features a patriotic image of a woman surrounded by home grown vegetables and canned goods and promotes a free book produced by the Commission. Victory gardens were also popular during World War II and in 1943, yielded a third of the total U.S. vegetable crop.

3. Again, Visit the American Heritage Center’s digital site, this time to view the folder titled "World War I-Correspondence L-P, 1917-1919.” Follow the instructions, above, for looking through the documents in this folder. This time, using the arrows in the upper right-hand corner, move through the documents to pages n125-137.  What evidence can you find from reading these letters that further verifies Hebard’s commitment to the war effort? Use specific examples from the documents to defend or explain your answer.

Life on the Home Front: Wyoming During World War I
Grace Raymond Hebard: Shaping Wyoming's Past