Now and again an old document comes along that offers a true feeling for its times. Recently we came across a pdf of a 1971 reprinting of a booklet first published in Wyoming Territory in 1886, just before the cattle boom busted. Tensions between big-ranch cattlemen and small landholders were heating up. 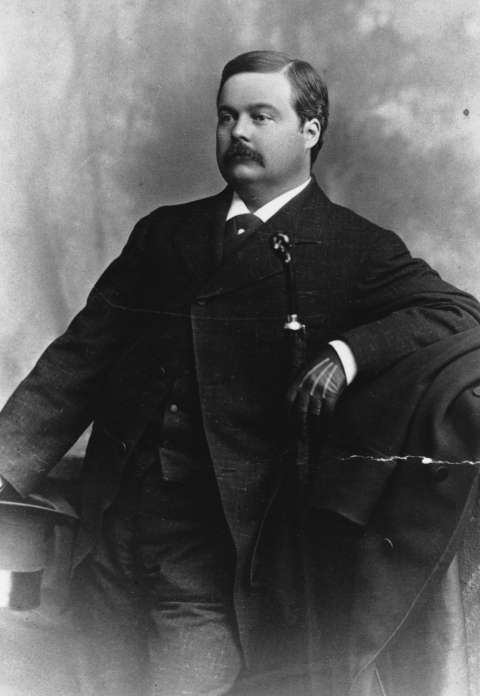 Among the most notorious of the big guys was Frank Wolcott, a round-faced former Union Army officer, prize fighter and U.S. marshal who by this time was running the VR Ranch on Deer Creek, south of Glenrock. The ranch was owned by British and  eastern investors; Wolcott’s wife had eastern relatives and connections. Among their eastern acquaintances was the young Owen Wister, who’d spent his first Wyoming summer on the VR the year before.

The booklet, unsigned, is an all-out, high-volume attack on Wolcott’s methods, motives and character. The author may well have been E.H. Kimball, editor of a brand-new newspaper, “The Rowdy West,” published at Fort Fetterman, by then a town, more or less, since the Army had abandoned its buildings four years earlier.

The author calls Wolcott, “a lickspittle of the lordly English” and in a string of anecdotes charges him with fraud, bribery, corruption and abuse of public-lands laws, all at the expense of men and families with smaller holdings.

When a Wolcott henchman named Bill Locker, "lazy, lousy, trifling, quarrelsome, mean and unprincipled,” armed, approached a certain Sumner Beach to scare him off his land claim, Beach shot him. The shooter turned himself in and was in jail, awaiting trial for murder.

The booklet appears to have been written to bolster public opinion on Beach’s behalf. If so, it worked. The jury deliberated about 15 minutes before acquitting him. Of Wolcott, the author concludes, “We are just simply representing what is said of him by his neighbors and acquaintances, in the camps and on the ranches all over Wyoming. He is known as the meanest man alive in this world.”

The photo of Frank Wolcott is from the American Heritage Center at the University of Wyoming. Used with permission and thanks.